Our good friend Peter Anderson is back this month with an article that looks at why he thinks that when it comes to river fishing, variety is the spice of life, or in this case fishing!

It’s the basic problem.....to concentrate on one river, to know it well, in high and low water;  in spring, summer, autumn and winter; to catch on dry, wet and nymph; to understand what makes it tick.  Or to try lots of different rivers, to have the thrill of the unknown and the satisfaction of catching fish in unfamiliar surroundings.

I have to confess that I like variety.  The rivers I know well are the southern chalk streams but only in autumn and winter, when grayling fishing can be had at a price that doesn’t break the bank, but even then I would find it difficult to stick to just one river.  No, that’s not right; it’s not so much new rivers, as new beats.  Something different.   I had a count up recently, I’ve fished 63 different rivers since I took up river fly fishing about 7 years ago and hope to add more to the list this year.  I usually catch fish too, although I have failed so far on two rivers:  the Rothay in the Lake District which I fished for an hour during a spell of very low water and gave up after the third canoe came through and got stuck on the bottom (and the paddler had to get out, not helpful!) and also on the wonderful Driffield Beck, again in a period of low water but my companions all caught fish and I somehow left feeling that I had truly failed that day....good excuse to go back.

The rivers I’ve fished can be conveniently divided into upland streams, lowland streams, chalkstreams and bigger rivers.  If I was limited to one type of fishing, then it would be on upland streams.  They have character, gurgling over rocks through tight valleys with lots of small but feisty obliging fish which are often keen to take the dry fly, usually with lightning speed.  These waters are generally in the north and west of the country, so Devon, Wales etc.  They are also generally cheap to fish with good day ticket availability, often thanks to the passport schemes.  In Devon, the Upper Teign and the Dart system are well worth visiting as well as the West Country Passport streams.  In Wales the Wye & Usk Foundation website has loads of information and although the new system effectively precludes booking “on the day” it nevertheless remains an excellent source of fishing.  In my view, the Monnow system reigns supreme here.  In the north east, the Durham Derwent is fishable on a day ticket and is a cracking river and in Cumbria the Eden Passport also has plenty of choice. 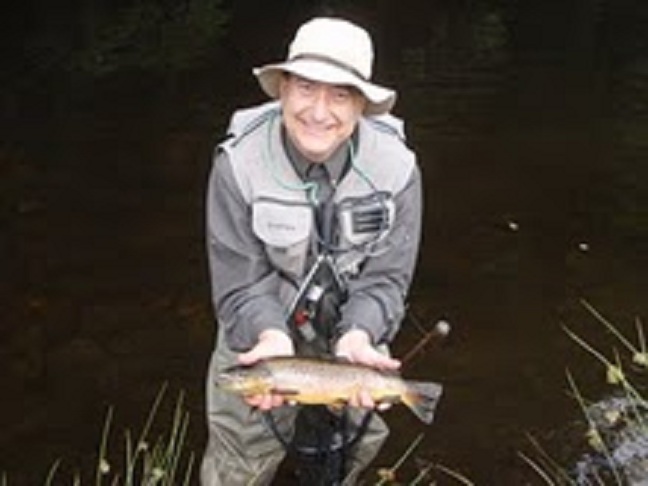 Lowland streams are different.  These have steep banks, deep pools and lots of brambles in my experience.  The bottom is often silt rather than gravel but this frequently means a good mayfly hatch.  Certainly my club water, Box Brook, fits this description.  The trout generally run bigger than their upland cousins and there will frequently be grayling and perhaps chub too.   The Upper Chew in Somerset has the added possibility of a really big trout coming out of Chew Valley Reservoir for a sojourn in the river.  Trouble is that catching a 6lb rainbow on a stream 10 feet wide can be a bit like having a fight in a phonebox (in the words of Vince Brandon, a wonderful image).  The passport schemes have some of this type of fishing available as well,  the Lynfi Dulas for example not far from Brecon.

There are beats on the chalk streams that I know well, albeit only in the autumn and winter.  Access can be limited but the Rod Box in Winchester had a selection of beats and the Lower Itchin Fishery is worth a visit.  And even though it’s grayling rather than trout, a day will often set you back more than a season permit would further north or west.  On the plus side, the rivers are generally fishable even after heavy rain (though that has not always been the case over the last three months,  ground water levels are now very high) and they are usually clear enough to allow sight fishing (a real thrill).  The downside (apart from cost) comes in the form of big, fat stocked trout.  On some waters trout catches will outnumber grayling by 5:1, indeed I have stopped fishing beats on the Avon and Lambourn because of this problem.  To the serious grayling angler, trout are unwelcome.

My definition of “bigger rivers” is a little unconventional, anything more than 30 feet wide is “bigger” in my terms.  Of course, these are often fast, deep, rocky and for a wimp like me, deeply frightening.  I make no apologies for the wading staff and my fishing vest which incorporates a buoyancy aid.  The trouble is, these rivers are often brilliant to fish, the real upside of the bigger river is the possibility of a big fish or two and that’s worth the odd ducking!  The Usk has a reputation as the finest dry fly water in the country and I’m not going to argue, but other fabulous rivers include the Eden (relatively easy wading) and the Tees (absolutely terrifying!).   The Yorkshire rivers are also great fun and with fairly easy access, try the Burnsall water on the Wharfe or the numerous day ticket beats on the Ure for a great day out in glorious surroundings.

So I doubt if I’ll ever settle down to fish one beat on one river.  I have a low boredom threshold, give me some variety!

Read more from Peter at his excellent blog Walks and Fishes