I'd been talking to some friends about light line fishing recently and also spoke with Theo Pike about his love of fishing with 1 and 2wt lines. He tells us about why he likes them so much.

Having enrolled on a casting course in Devon with the man who would soon take speycasting to the States and play a major role in elevating it to global-cult status, it wasn’t any kind of reflection on his talents as a teacher that by the third day I still couldn’t cast worth a damn. But one thing I’d learned for sure: I was already infatuated with the upper Torridge where it slipped under Woodford Bridge, and the moody, paranoid, passive-aggressive brownies which intermittently snatched tiny mayflies from its beery foam-lines.

These fish are spooky, Simon Gawesworth drummed it into me. So you need to be stealthy – don’t be afraid to go with the minimum line rating on the rod, maybe drop down one or two weights if the water’s low and clear. A light line makes less of a splash on the water and casts a smaller shadow – it’s also more sensitive to gentle takes, helps you strike faster, and it’ll cast as far as you need with skill. Even if you can’t really feel that light little rod loading, don’t worry – just flick it quickly and gently and the fly will do the rest. 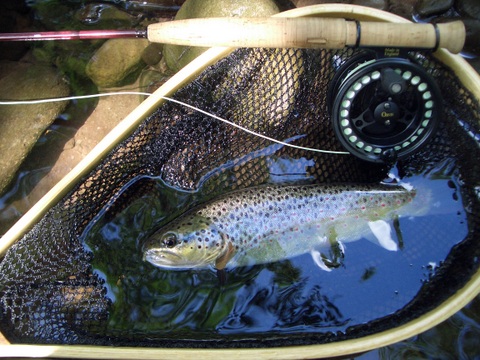 I listened, I went stealthy. Simon was repping for Daiwa at the time, so I bought a tip-actioned eight and a half foot 4 – 5 weight rod from his range. I lined it with a classic Cortland peach DT3F, backed up with a DT2F for drought-hammered chalkstreams on the Salisbury & District ticket.  I started catching fish. And even though the master would probably still disown my casting technique more than 20 years later, his solid rationale and quick, light-loading rod feel stayed with me: today I continue to cast most of my flies with a 3-weight line or lighter, a niche-within-a-niche of our sport that’s come be known as ultralight fly-fishing.

So, apart from good old-fashioned West Country common sense, where did this stealthy movement originate?

According to aficionados on the Ultralight Flyfishing Forums, Leonard Catskill went into print with a bamboo rod whose line weight would have corresponded to a modern AFTMA 2 weight as far back as 1894. But what we’d now recognise as ultralight seems to have begun in earnest with Lee Wulff, who recorded in his book The Atlantic Salmon (1958) how…

“As a pioneer in the use of extra light tackle for salmon, by 1940 I had come down to a seven-foot, two-and-a-half ounce fly rod, and since then have rarely used anything heavier. In 1943, in order to demonstrate to the most confirmed doubter, I eliminated the rod entirely from my tackle. Casting some thirty-odd feet by hand, I hooked a ten-pound salmon and played it by holding the reel in my right hand, reeling with my left, until I could finally reach down and tail it with my own hand, ten minutes later. Witnesses were present and pictures were taken to prove that a salmon rod may be as light as one wishes, even to the point of none at all.” 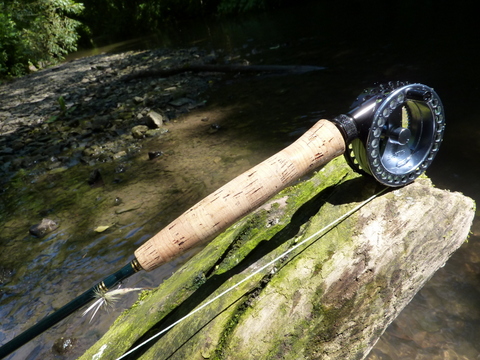 Right on the edge of experimentation as it was, Wulff’s existential stunt sent American rod development in separate directions. On the one hand, as Paul Schullery says, it strengthened American convictions that rods of 10 feet or less were all that were necessary: as a result, the multi-tasking Montana-standard 9 foot 5 weight is still the backbone of most rod-makers’ lists today.

And on the other hand, Wulff’s salmon-centric crusade set other manufacturers wondering just how little rod they could get away with elsewhere, particularly for targeting small fish in the tightly-forested streams of America’s eastern seaboard.

Angling historian Bill Byrd records that the Orvis Company began building light line graphite fly rods in the mid 1970s, and cemented their expertise from the early 1980s when Jim West and Howard Steere created the Ultrafine 2 weight – apparently a line weight which has never since been absent from the Orvis range – while the same era also saw the launch of Scott’s fibreglass 3-weight.

Sage came comparatively late to the ultralight party in the mid-1990s, but made a dramatic entrance with ‘the world’s first ought-weight outfit’ designed by Jerry Siem, an achievement later progressively consolidated with ratings down to 000 weight or ‘triple-ought’.

(Propped up on my desk as I write this, there’s a copy of the Wild Trout Trust’s very first Salmo Trutta journal, containing an advertisement from Sage announcing the SPL ought-weight Center Axis variant – a design which “integrates the reel into the rod’s handle for better balance”, and is still regarded by myself and many others as the ne plus ultra of single-handed fly rod design).

What does ultralight fly-fishing mean in practice today?

At some point in the last 30 years, the definition seems to have crystallised at AFTMA 3-weight and under (although you can reasonably argue that modern materials can make even a 3-weight a bit of a cannon). Most experienced ultralight fly-fishers tacitly agree that the margins of error generated by tiny variations in different rod actions and line tapers, compounded by personal feel and preference, can make the whole experience a singularly subjective affair: one man’s latest-generation Sage TXL-F ‘ought weight’, for instance, may feel very powerful to someone else who prefers the fuller flex of a vintage Orvis 2-weight Superfine.

But it’s still possible to summarise objective differences with reference to relative grain weights from 3 weight down to the Sage-only sub-zero weights (assuming AFTMA equivalent grain ratings for the first 30 feet of line, with 1 grain equal to 0.065 grammes – hat tip to Simon Zlachevsky for these numbers!):

From an indicative 2-weight and downwards, rods at the lighter end of this range are noticeably dominated by premium brands. However, the results from a 2009 shootout of 2-weights, complete with explanations of the Common Cents system for rationalising Action Angles and Effective Rod Numbers, suggest that the mass market is catching up, in America at least.

In Europe, progressive techniques like French and Spanish nymphing have also encouraged the development of long ultralight configurations, and the average line weight for most manufacturers has pushed noticeably downwards over the past half decade. Today, I find it hard to think of a single brand that doesn’t include at least one 3 weight, often with reels to match. And of course there’s also tenkara, which does away with reel and running line altogether, and reverts to the loop rod design which would probably have been recognisable to our angling ancestors all over the globe. 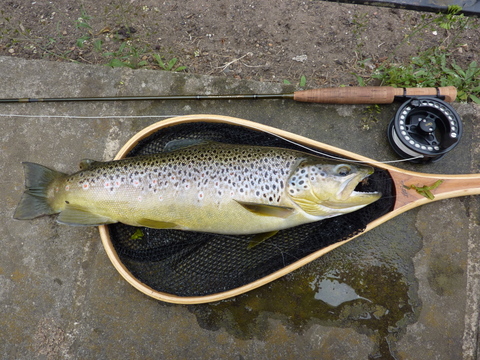 No doubt, this is a measure of how far the idea of stealth in small stream, river and even stillwater fishing, both for traditional fly-target salmonids and many other species, has developed within my own fishing lifetime. It’s also a welcome recognition that fish-fighting ability has rather little to do with slugging it out with heavyweight kit, and depends much more on the skill and finesse of the angler.

For me at least, the sensitivity and finesse of ultralight encapsulates everything that’s most enthralling about fly-fishing. Today’s ultralight rods are highly-capable, super-sensitive surgical tools that maximise stealth and accuracy, act as very effective shock-absorbers for light tippets, transmit every electric fin-flick of the smallest fish, and show their steel when your fly unexpectedly gets swallowed by the daddy of the pool.

My own quiver of 1-, 2- and 3-weights have proved ideally suited to Devon streams, Alpine torrents and urban rivers of all shapes and sizes, and there’s a real possibility that I’ll eventually travel full circle to end up swinging the kind of ultralight switch rod that recently seems to have grabbed Gawesworth’s attention all the way out there in Idaho.

Whether you’ve yet to try fishing ultralight, or you’re a long-time addict like me, I’d strongly recommend following some of the links below to find out more.