A little about me first.

My name is Stephen ... and I’m a fly fisherman! Well, I am not sure if that’s strictly true*, I started fly fishing when I was thirteen or so back on the late seventies early eighties, taken down to the river Wear by a kindly neighbour at Barnard Castle in County Durham and taught to cast, or at very least leave a pile of spaghetti at my feet, it seemed almost impossible to get any line at all out of that fibreglass rod.

Curiously I stuck at this impossible task and joined the local angling club, fishing for the next seven or eight years or so on the river Wear in the Bishop Auckland Angling Club, with some semi success, catching brownies and grayling.... then I discovered beer and women and the fishing took a bit of a back seat.

Then we can fast forward to about five years ago, with a son rapidly growing up I felt it was time to dust off the old fly rod. My God it was like fishing with antiques compared to modern equipment, things had changed so much it was unreal.

So, kitted up with a nice 7’ Shakespeare Odyssey and still using my rimfly intrepid, I set about the river Derwent that runs across the Durham, Northumberland water. There is some beautiful water all for the princely sum of £78 per season. 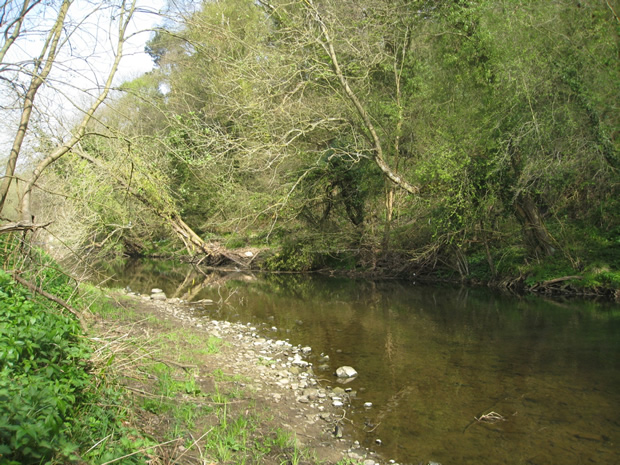 I had two very good seasons, on the Derwent catching wild fish to 1½lb and stock fish up to just under 2lb, after two seasons though it was time for a change and I plumbed for the river Blyth which is where my story begins.

The water is controlled by the Bedlington and Blagdon Angling Association and they have around six and a half miles on the river.

The Blyth is a similar river to the Derwent in many ways; a small river that runs through some beautiful countryside, maybe with slightly more peat stained water than the Derwent.

It is well stocked with some very nice Brownies and also has a good head of wild fish to boot, casting however can be tricky, very tricky at times and although my casting no longer leaves a pile of spaghetti at my feet I have decorated more than a good few trees over the last two years on the Blyth. 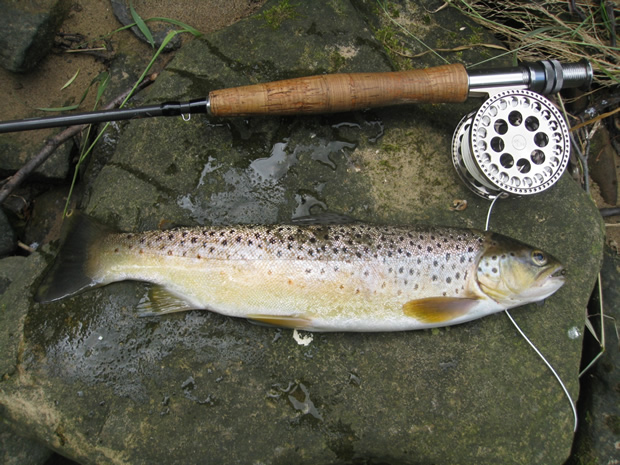 Plenty of wildlife can be seen out and about too, deer seem plentiful, you will have to take my word for that, as I am never quick enough to snap them, there are also a few mink on the river and although not overly welcome, are nice to watch frolicking in the water despite their destructive nature.

There is however many, many fishy looking pools and riffles that contain a fair amount of decent fish, which is what it’s all about I guess.

Fly fishing for me is a thing of extremes.

When things are good they are bloody good, I remember excellent days on the Blyth.

My opening day of my first season springs to mind, I was expertly guided around the river by a strange man I met on the internet! Who as it turned out was not too strange but a thoroughly decent chap (Dazkat off  http://www.ukgameangler.com/ ), he had a guiding day to remember, putting me on fish after fish on a day of constant bright sunshine and temperatures of high 60s low 70s°C. Three nice fat brownies came to hand... exactly where Daz said they would be.

That first season there wth some real good fishing to be had on the Blyth.

That is countered by days like the start of this season, freezing my bits off, the fish obviously tucked up somewhere warm pointing their fins at me and laughing as I put a plethora of flies up nearby trees and shrubs, at this I have been particularly successful this early season managing a measly two small but beautiful grayling and one other bite in about twenty hours of fishing.

It has been an inauspicious start to say the least.

I did mention at the top of the article that I wasn’t sure if I was a real fly fisherman.

I do like the acronym KISS... Keep It Simple Stupid..I fish a 7’ Shakespeare rod, with an 8’ nylon untapered leader, I carry about a dozen different wet fly patterns and that’s about me, I fish down and across almost exclusively, that’s it.

I do feel a bit of a fraud, when I see folk with tapered copolymer leaders, upstream nymping. Basically people who look like they know what they doing!

That said at the end of the day it’s about enjoyment isn’t it?

In the last four or five years I have met some great people who have been very generous with their time and their feathers for my efforts at fly tying..... thank you to you all.

People like this really paint the fly fishing fraternity in an excellent light.

I guess the future holds more of the same for me, wet fly fishing on either the Blyth or the Derwent. I am torn between the two if the truth be known as we are truly blessed with some excellent, affordable river fishing all within less than 30 minutes drive of central Newcastle.

I hope you have enjoyed my incoherent rambling about my exploits on a couple of my local rivers and you never know if it makes it to “print” you may hear more from me!