Standing on the bridge I can see the scene unfold as the flotilla of Large Dark Olive duns drift down the river. Some make it, others don’t. Those that don’t are picked off by trout. Not just any trout but big hungry trout taking advantage of this bounty.

It is the sort of thing that can make any fly angler shake as they quietly wade out and get ready to make their first cast. 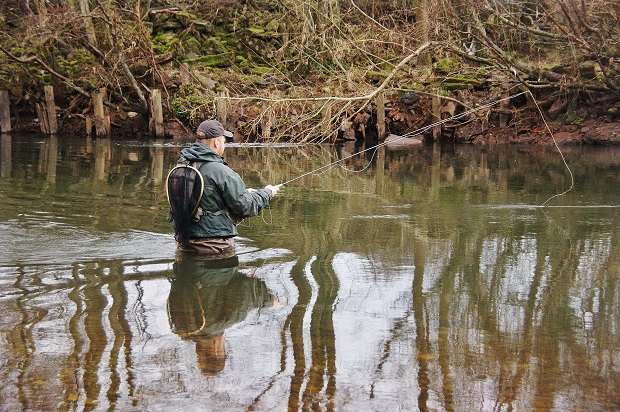 I was hoping it was the right time for me as I headed over the Severn Crossing and into Wales to fish the Usk.

The trip had initially been planned to coincide with the hatch of Grannom, our first major caddis hatch of the year but the weather had pushed the schedule back a bit and the Grannom Emergers I’d tied would have to wait a bit. I’d been doing some last minute tying of quill bodied Large Dark Olives instead. 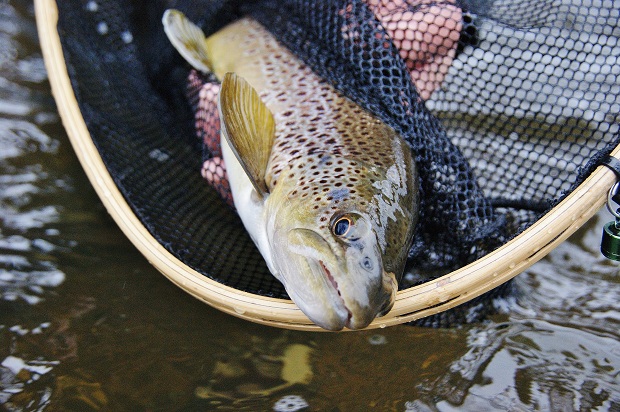 To those in the know the Usk is regarded as a good early season river enjoying excellent hatches of Large Dark Olives followed by Grannom.

I was lucky enough to be fishing the Llanover beat on the Usk, regarded by many as one of the best bits of water on the river.

As ever I was early but a thought struck me as I decided to get my gear ready. “It was the village hall wasn’t it?” I thought to myself. I rechecked my phone and saw it was the church hall where I was supposed to meet my host for the day, Lee. 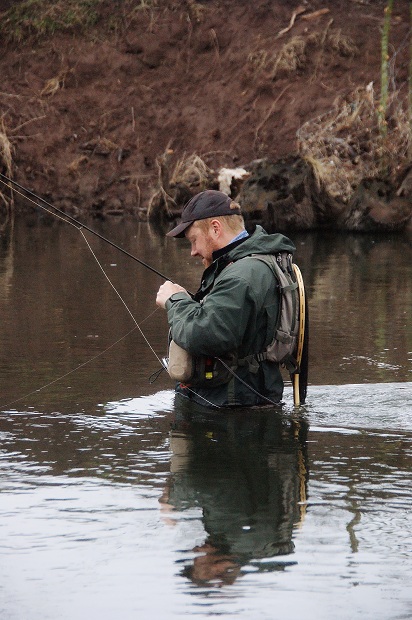 I quickly texted him and headed for the church located just a short drive away on the other side of the main road. It was a narrow lane and a car was coming the other way. It is funny that a fly angler can often sense another fly angler close by. This was one of those occasions. I nodded at the driver of the other car and then broke into a smile as I spotted the Hardy cap Lee was wearing.

Lee is an out and out countryman but fishing is near the very top of his favourite pursuits. He bounded out of his car and greeted me with a warm handshake.

Lee explained that Tim, the river keeper, was going to show us the water and then let us loose on it.

We didn’t have to wait any time at all as Tim was soon with us and taking us over the bridge pointing out some likely spots. We both saw a fish rise just a short distance upstream. Perhaps this might be the start of what might be to come?

After Tim left us we headed downstream. Despite seeing the one fish rise we decided nymphs were a better option. Lee felt that the olives would really get going from 11.30 onwards. I watched Lee skilfully work a pool and after a couple of warm up photos I walked downstream and decided to fish some water that looked perfect for nymphing. I fished my bank as I was unsure as to if I could fish the other one. As Large Dark Olives were on the menu I tied on two pheasant tailed nymphs. One with a 3mm tungsten, black bead and one with a 3mm gold tungsten bead.

Lee came down as I finished fishing  and told me he’d bumped a fish and lost one. I asked about the other bank to the one I’d been fishing and on finding out we could fish that too I suggest he gave it a try. 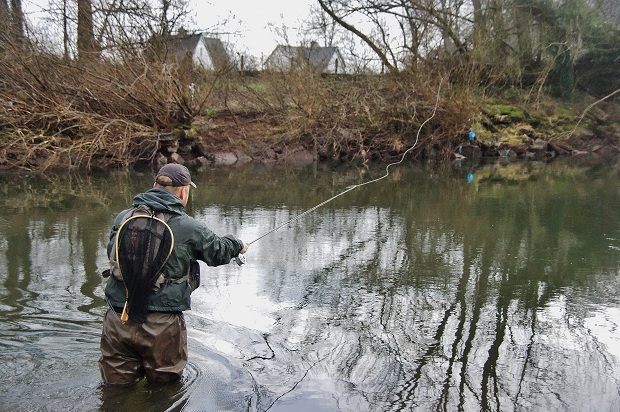 It was one of those runs that looked like it had everything any sensible trout would like. Lee proved the point and hooked and landed his first fish of the day, a beautiful Usk trout of some 14 inches. quickly followed by another of a similar size . He gallantly offered me a shot and I waded to a spot where there was a small bay where a trout could hold off of the main flow but could intercept anything that looked tasty that would pass in the quicker main flow.

The braid indicator jagged briefly and I was convinced it was bottom and lifted the rod clear of it. “That was a fish” said Lee. I had convinced myself that I had felt the fly “snag” on something. The fish in Devon leave you in little doubt when they take but on running my flies down again I struck into the snag and this time it moved. Big lesson learnt. I was attached to 17 inches of angry brown trout. I netted the fish and returned it and watched Lee work some more of his magic on a couple more fish. 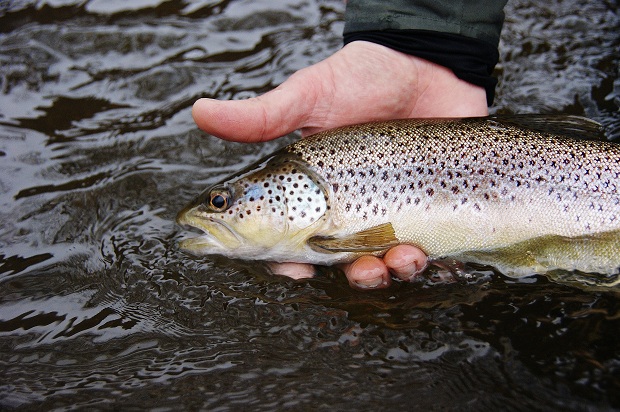 It had been a heavy sky but it was doing its best to lift and we walked up to some flat water near a tail of a pool to look for a rising fish. We saw one but it was a “oncer” and despite Lee trying to cover it we didn’t see it move again.

We decided on a quick sandwich and walked upstream of the footbridge in search of large dark olives and rising trout but on walking up a little way we saw fish starting to rise but on the other bank safely out of casting distance.

We walked back, crossed the bridge and walked up. Lee got himself in to position and cast his fly over a rising fish. The fish took, Lee struck but it came off. We walked a short distance further and the same thing happened. Fish were starting to rise everywhere though. 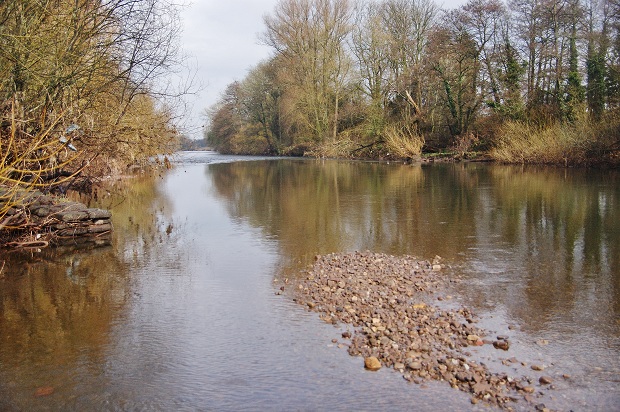 We watched trout keying in on the large dark olive duns and Lee managed to get a cast from a tricky position out and into the lane of where the nearest fish was feeding. He struck and this time the fly held.

Lee was keen for me to have a go and I wasn’t going to argue. We walked further upstream looking for rising fish and saw one. It was a little close to the bank and I couldn’t  get in downstream of it as there was little by way of access. I would have to get in as quietly as possible, wait and bit and see if I had spooked the fish or not. 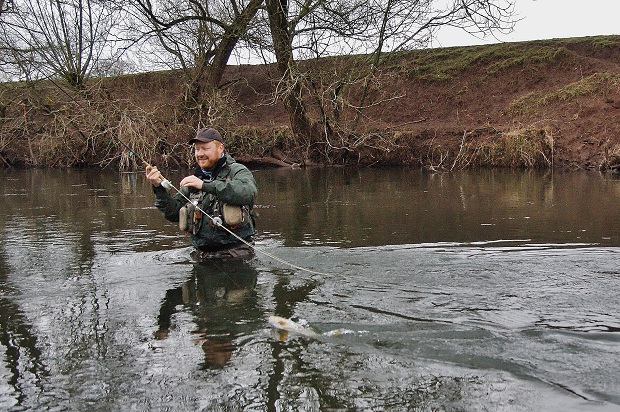 I’d tied on a size 14 pheasant tail dry that had a CDC wing. I didn’t have to wait too long as the fish carried on rising. It took my second cast and after releasing it I noticed a bunch of fish rising to my right, out in the middle of the river. My first cast showed me drag might be an issue and the second cast, this time with some added slack in the line let my fly drift down the feeding lane. The take was a confident one and I hadn’t moved and had two fish. I dried my fly and saw a fish rising close to where I had taken the first fish.

I’d love to say it took first time but I had to change things a little and I changed my fly for one of the quill bodied dries, again with a CDC wing, I’d tied a few days earlier. This one worked and the fish was on. I couldn’t believe how hard they fought. I released the fish and caught three more. I hadn’t moved a foot, had rising fish around me and caught 5 of them. The smallest was 10 inches and the largest 14 inches.

It was then I realised I was in the middle of a superb hatch. The other thing I realised was that I had to take some photos. It could have been so easy for me to just carry on fishing and in a normal situation I would but I also had an article to do too. 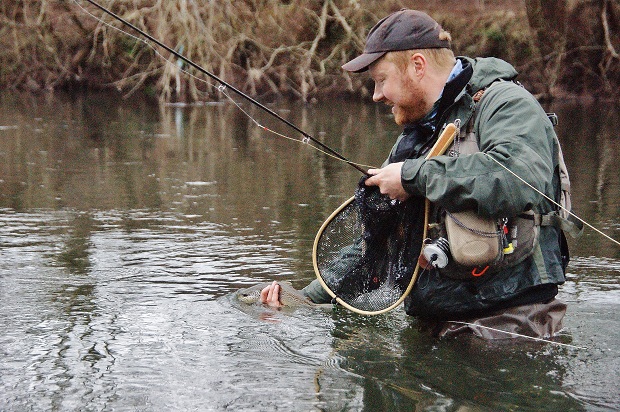 I got out, walked upstream and found Lee. He asked me how I’d got on. I held up my hand and he said he’d had a couple. He’d been fishing deeper water than me and the fish hadn’t been rising as much as where I’d been.

We walked back down to the spot I’d been fishing and guess what? There were still some rising fish. Lee caught a couple more. The hatch was starting to ease and it had started to rain, in fact the rain was starting to get a little heavier.

We decided to fish the run on the far side of where I had started with nymphs but on walking down Lee couldn’t resist casting to a lone rising fish we saw. 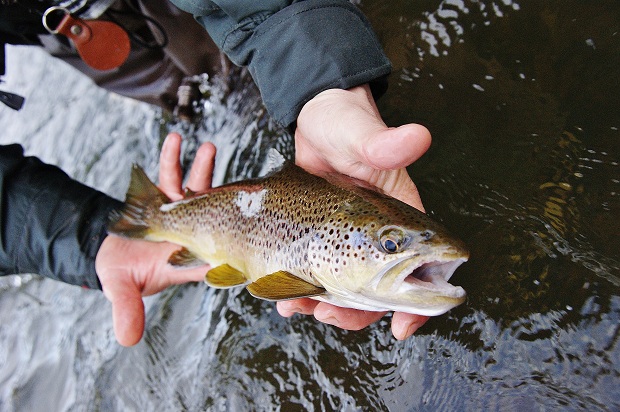 He caught it and I sat on the bank and watched him skilfully and methodically nymph fish the run where we started the day. He had three more beautiful brown trout.

We fished some more and when the rain came back we decided it was time to head back. 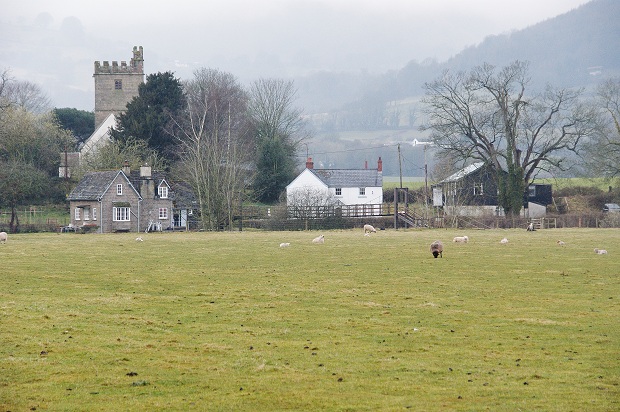 The Usk has always been a bit of a bogey river for me. It isn’t that I don’t catch any fish it is just I feel I haven’t fully it done it justice. I don’t feel like that anymore. I’d been lucky enough to be on a stunning stretch of water at just the right time and saw an LDO hatch I won’t forget in a hurry, had some great company and some wonderful fishing too.

Although the LLanover Estate does not offer day ticket fishing there are a limited number of season day rods for both salmon and trout. Details below