It had been a busy spell for us and we needed to go fishing. I let Lewis choose a venue as it was his birthday. He made a great choice!

We’d both been busy and Lewis had been guiding on his birthday. We needed to make up for it and go fish for ourselves.

I asked him where he’d like to fish, I’d thought what the two possible answers might be and when he gave me his choice it was one of them. It was a good one. I had told him about a stream I like to fish and it is the sort of place you don’t talk about in fishing company too much and if you happen to bump into a friend who might also have sniffed it out, we just refer to it as “that” river. 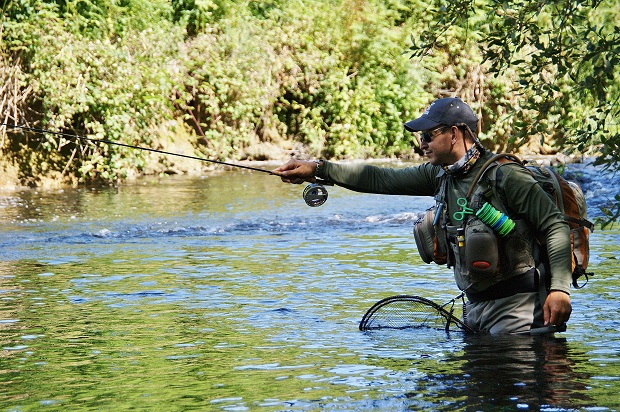 I packed the camera and we planned to catch a few fish and talk about fishing streams in low water during the height of summer. The only slight downside is that we’d had some serious rain during the night, the first in some time but it was enough to colour the water up.

We had three rods between us. A 9ft 9" rod for nymphs, a 7ft 10" rod for a dry in case things got a little tight in places and a 9ft 4" rod that I brought along for no other reason than it was new and I wanted to christen it. It could double up as an extra dry fly rod.

Lewis rigged his long rod for nymphs and as the water was carrying colour he tied on a nymph with an orange bead so that it stood out in the coloured water. He tied a shrimp pattern on to a dropper. I left my new rod unstrung but tied on an attractor dry that I felt would be big enough to attract a fish keeping half an eye skyward through the murky water. It was more a Quarter Pounder rather than a regular hamburger. 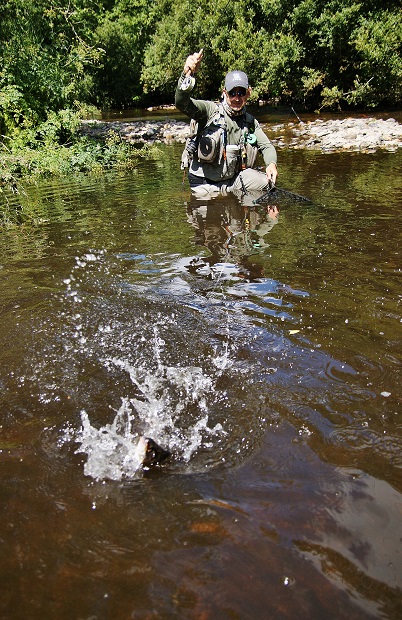 We’d fished the sort of pool you feel has everything a trout, and in the case of this stream, grayling too might want. Lewis snipped off his orange bead head feeling that although it would stand out it might be just a little too obvious. He was right and we saw his indicator make just the tiniest halt in its run down the pool and first fish of the day, a trout, was in the net.

I ran my dry down a slightly faster foam line of a pool and stuffed a couple of fish. I think this is one of the slight downsides of attractor flies. They do what they are supposed do in that they attract fish but the two responses I find most common are the aggressive, almost territorial, slash at the fly or the trout coming over the top of fly. This means you either have to strike incredibly quickly or let the fish take the fly and then hit it.  It isn’t that often that it will be a bog standard confident rise. There is never a dull moment with them though and I love fishing them. 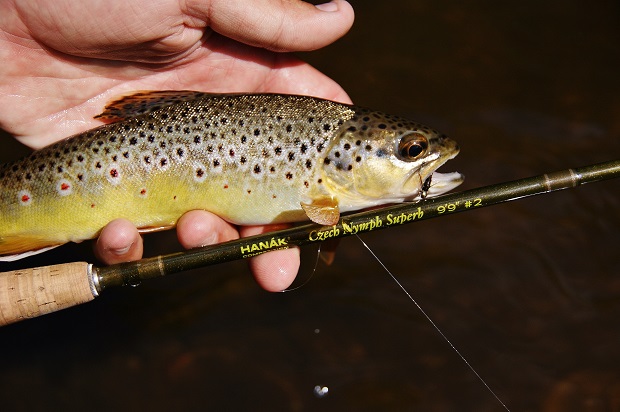 I really enjoy watching Lewis fish. He is very methodical in his approach but it pays huge dividends to his fishing and I have often seen him change his flies many times until he has the right combination. This is especially so when it comes to dries. He was telling me recently he’d made 18 fly changes until he caught a fish he was after. I’d have probably thrown a brick at the fish after a dozen.

We’d noticed the river was starting to clear due to the proximity of its source, and there were a few caddis starting to hatch, Yellow Sallies and a constant flow of midges. 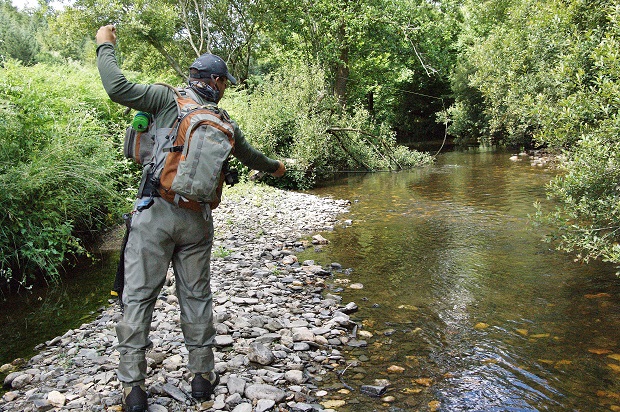 Lewis told me about a dry fly he uses called the Spectra Red and Black that he said he was confident it would christen my new rod. It did. The takes that we’d been experiencing with the attractor dry turned into confident rises. In one pool we watched a good trout follow the fly for a short distance down stream and take just how we hope they always will. It turned out to be one of the biggest of the day. 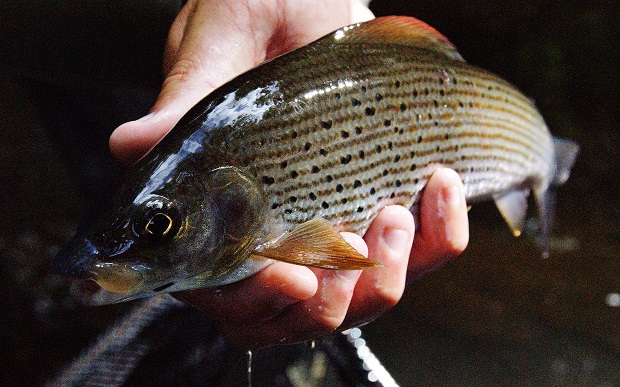 I only snipped it off towards the end of the day when I saw a fish hit a caddis. Lewis was fishing a faster run downstream so I popped it in to my fly box and it only dawned on me that I still had it when I got home. My memory just isn’t what it used to be.

We’d now settled into a rhythm of Lewis fishing the heads of the pools with nymphs and me fishing the rest with a dry. I was really enjoying my new rod and wanted to fish it some more. We also cast the attractor fly in the heads of pools that were too shallow to fish nymphs.

We walked, fished and talked. I really wanted Lewis to fish a pool that I knew he would like and when we got there two good fish were rising in the tail. It is always nice when you tell someone about a spot and you get there and are greeted with the sight in front of us. 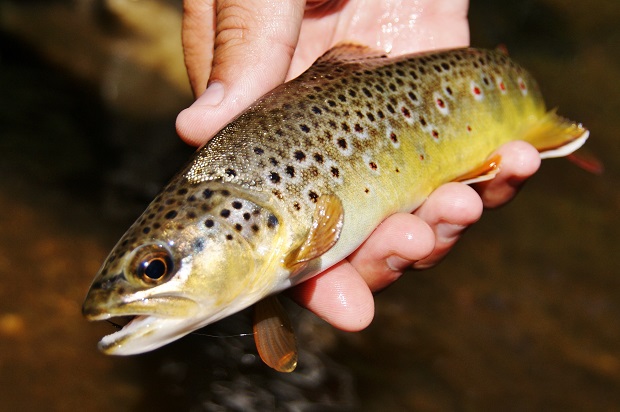 Lewis got into position and I held my breath. After four perfect casts and drag free drifts I had to breathe again. The fish hadn’t taken and had stopped rising.

I guess this is one of those things about these sorts of pools. I really like this one and I am sure everyone else who fishes there thinks the same. It is deep, has a nice run into it and is free from overhanging trees. There aren’t many pools like this on the river as a lot of it is under a canopy of trees so I suspect the fish are pretty smart and very wary. Lewis had a trout out of the head of the pool but that was it.

I took him to one last pool. It had a nice narrow neck that ran a good distance against a bank. It was a few feet deep and cried out to be nymph fished. I saw Lewis lick his lips and soon hook into a grayling, a nice one for this river. It was a fitting birthday present and end to the day.