Ever thought about cod on a fly rod? Jeroen Schoondergang tells all

Most trouties who are interested in setting foot in a salty environment, are hesitant. The best way to lose your cold feet is to score: get some fish and find out that fly fishing in the salt works. So here’s a tip: take your fly gear and hop on a June flight to Bodø in arctic Norway. One warning: try not to get spoiled. Fly fishing in the salt isn’t always going to be this easy. 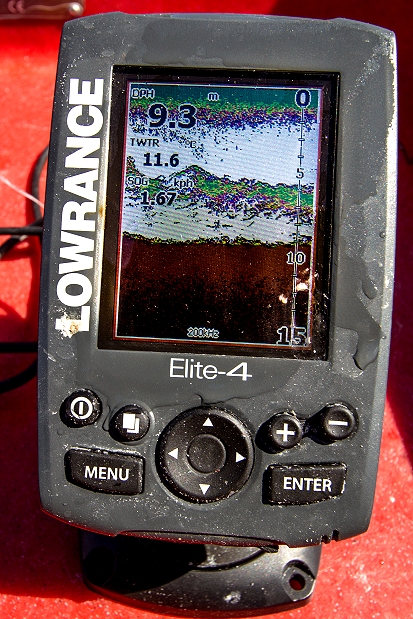 A holiday home in the marina of Kløkstad, half an hour’s drive from the arctic harbour town of Bodø, has some features that will be very hard to beat. On a clear day you have a view from your balcony, over the most spectacular sky line anywhere: the Lofoten mountains. And right below you, in the marina, there is a daily visit from a pack of hungry coalfish that are eager to snap up your fly right from the jetty. The added fact that the owner rents out his 15 foot fishing boat, makes it the ultimate arrival for any fly fishing holiday maker.

Tell a Norwegian that you’ll be fishing for cod in June and he’ll tell you that you are out of your mind. You fish for cod from late autumn to the winter, when the fat skrei arrives, the best eating cod in the world. In May these fish are done spawning. Their flesh has become soft and their eating quality is practically zero. However, these fish need to regain strength for next year’s spawning. They do so by marauding shallow sandy spots to hunt for crabs. In some bays you see fish up to 40” shake up the seaweed patches and snap up the crabs that fall out. These are the areas where you can actually sight cast a fly for cod. 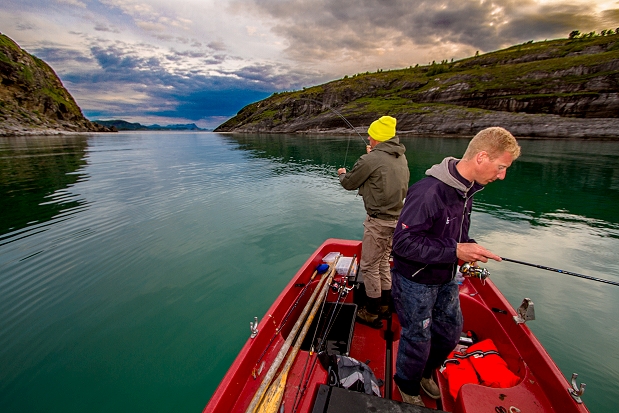 I have been fly fishing in saltwater in Norway, for well over thirty years. The usual course of events when fishing a new spot, is to find structure like rocky drop-offs, reef edges or steep cliffs. Fish will gather there and you will more than likely be in with a good chance. In Bodø we had agreed on the same tactics. As we prepared our gear, I ‘parked’ the dinghy over a sandy patch, a couple of hundred metres in front of the marina. My fishing buddy Menno had his spinning rod ready and while waiting for buddy Rob and myself to rig the fly rods, he dropped a soft plastic lure overboard. The lure never reached the bottom, as it was snapped up by a hefty 25” cod. Rob put on his polarised sunnies to have a peek at Menno’s fish. ‘Jeroen, stop what you are doing’, he shouted. ‘Look at this.’ Beneath our keel we looked at dozens of big fish cruising the sand. Every time one of them found a patch of weed, they started shaking violently. Surrounding cod joined in the feast. 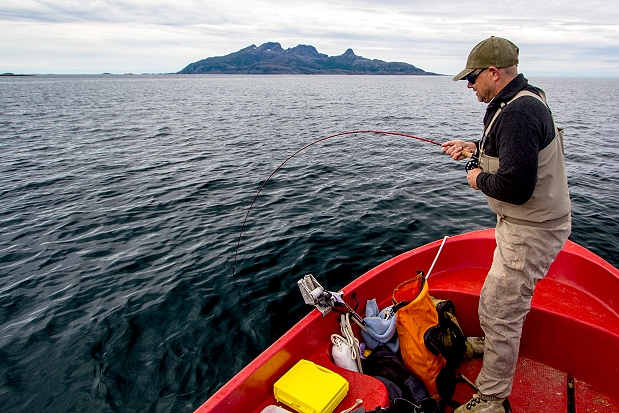 In a reflex Rob made a sloppy cast. As his fly sank we saw it being met halfway down by a small cod, eager to snap it. He never got the opportunity as a bigger fish violently pushed him out of the way and simply engulfed the fly.  Ten minutes into our first fishing trip one fish had already been boated and numbers two and three were pulling a bend into our rods. The next days, sandy patches like this one would account for hundreds of cod on fly. 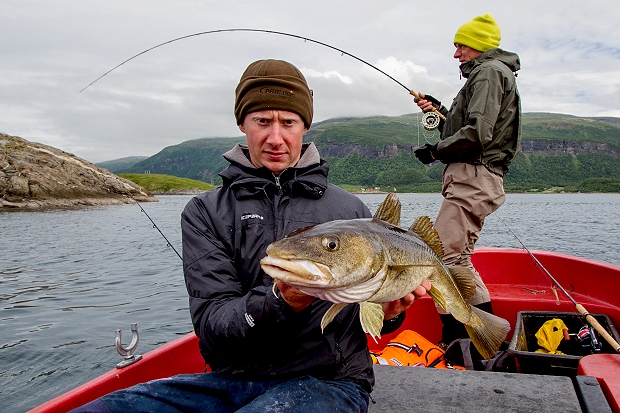 Anyone expecting a ‘how-to’ section in this article will probably be disappointed. The fact of the matter is that we forgot about tactics on our first trip to Bodø. In the end we just looked for spots that were unlikely to hold fish, just for the heck of it. And more often than not, we hooked cod on these seemingly barren spots. 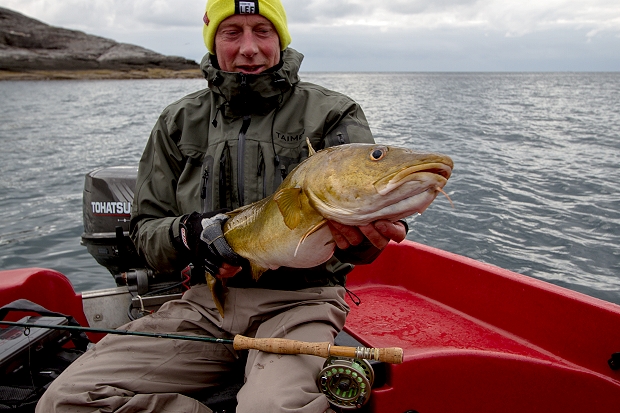 But when fly fishing is so easy, is it still fun, I hear you think. Hell yes it is! Reeling in fish after fish will get tedious after a while. Reeling them in surrounded by the most magnificent scenery you can imagine, is a different story. Add to that, the visual aspect of the fishing itself and you’ll cross out ‘tedious’ and replace it with ‘addictive’.  Many of the takes are visible and at times cod of different sizes do battle for your fly in plain sight.

There is absolutely no reason to invest in aftma 10 fly rods and fighter jet brake-reels. A seven weight is more than sufficient to boat even 40” cod. Just keep the rod in the right angle (never more than 90 degrees) and apply plenty of side pressure to get the fish out of its comfort-zone.  On my first trip to Bodø I started out with my saltwater three weight and never took out any of the heavier rods. If you keep to the ground rules for fighting big fish on fly (angle, side pressure) you’ll be amazed about the potential of little fly rods. 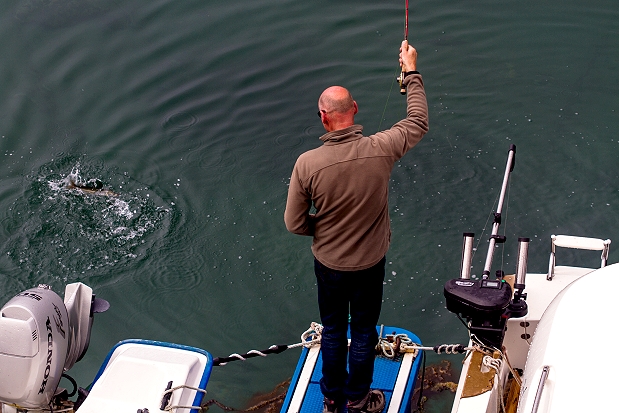 So you will probably have the rod and reel-part covered. Lines aren’t all that difficult either. Bring a fast sinking shooting head or integrated shooting head, to match the weight of your rod. This will be the line you’ll be using most, as most spots you’ll fish for cod will be between two and six metres deep. Both Scientific Anglers and RIO sell level lines weighed with tungsten, on bulk spools. Fabricating your own fast sinkers will be a snitch with this stuff. Remember to use a weighted fly if you fish a fast sinking line. Having your line sink faster than your fly will result in tangles.  Bring shrimp and crab patterns and a selection of baitfish flies. Because of the hectic action we chose to crimp the barbs on our flies. 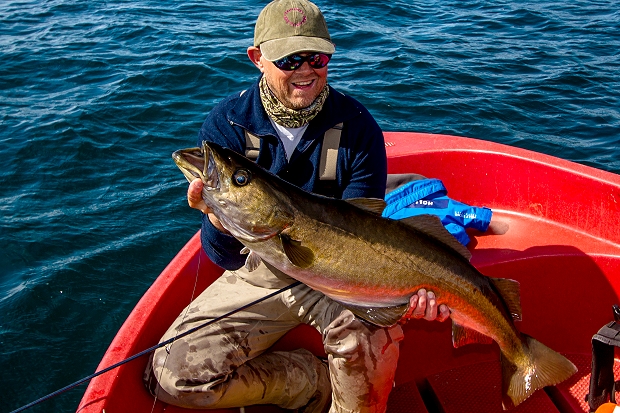 The second line to pack is a slow intermediate, my favourite is the Barrio GT90i. I use this line combined with a surface fly, like a slider or a diver. Surface feeding coalfish and mackerel will be all over these flies and will provide you with a break from cod fishing, if you’ll ever need one.

Novice or old-hand, Bodø will provide you with a mind-blowing experience. Sight fishing for cod will become addictive, if only because of the many challenging spots, all with incredible scenery. Besides cod there is plenty more to discover, even if you don’t venture more than two or three miles out. We found a reef that holds a small population of giant pollack. One of which went into the double figures, in kilos! And then there is halibut. As of yet we have only boated them on a spinning rod. But we did get followers on flies.

Last but certainly not least there will always be coalfish. Baby fish that harass your flies when you don’t want them to and then the odd stonker that will make runs that go deep into your backing. Whichever experience will be yours, you’ll never look at fly fishing in the same way, after a summer trip to Bodø.

Read more about my latest trip to Bodø on http://whatliesbeneathfishing.blogspot.nl scroll down for the English version.