When I drive past the stone markers on the B3357 that define the edge of Dartmoor National Park I like to wind the car window down. The evening air has that strong scent of summer that adds to the anticipation ahead of a night fishing for Sea Trout. The four distant red lights of the radio mast on North Hessary Tor glow like embers and the street lights of Princetown will be flickering on. The night has a different feel to it, whether that's down to changes in the ionosphere or my imagination. It's amazing how well your eyes can adjust to the dark, if you give them the chance, but it's the other senses that really come into their own. Hearing and touch are both heightened. 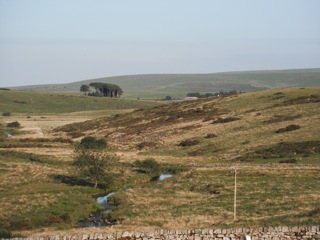 Dartmoor is a special place. The vast, sparsely populated landscape sweeps from Tavistock to Bovey Tracey. The tors are littered with pre-history, but thousands of years before the first hut circles were built Sea Trout were colonising the river systems. They entered the new formed valleys at the end of the last Ice Age, and they spawned in the river gravels. The current population of Dartmoor trout are their descendants. At night, away from the electric towns, modernity is stripped away.

I’ve been coming here on Friday and Saturday nights since May. It’s a shame to be confined to the weekends, but work - that devil’s bargain of time for money - gets in the way. I fish the upper reaches of the River Dart, where it splits into East and West branches. May is too early to stand much chance so far from the sea, but I was keen to practice being alone, at night, on Dartmoor and the river had to be re-learnt.

It seems to me that places that look like they should hold fish can be barren. I suspect that’s not a phenomenon unique to the River Dart either. The only way to find out where the Sea Trout are in your river is to put the hours in. It’s a bit like learning the tells of a fruit machine, an investment of time that should pay off in the end. The river at night is different from its day time shape. Distances change, as though someone comes out and moves the boulders around as soon as it gets dark. 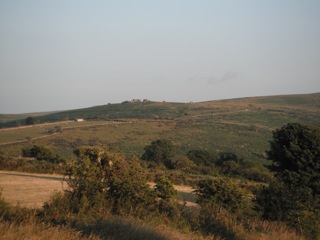 In the beginning I relied too heavily on my torch, to move from pool to pool, change flies, or find out just what is making that rustling noise in the bushes behind. Now I'm used to the dark, I know what a curious badger sounds like, and I don't turn the light on if I can possibly help it - even when changing flies. The darkness is no longer something to be overcome. Fly fishing at night is challenging enough as it is, but I am determined to make it harder by only using flies I've tied myself.

It helps that Sea Trout flies are fairly simple to tie. I carry a small and varied selection made up of some recognised classics and a few personal creations. Blue can be a useful colour, as blue light penetrates water the furthest, the fashion in the Westcountry is for black. It might seem counterintuitive to use a black fly at night, but it makes the strongest silhouette against the night sky. My surface lures are spun deer hair because, for no good reason, foam feels wrong.

I arrive at the river before the sun has fully set to sit on the bank, wait, and watch the bats. A dog barks in the distance. The inspiration for Grimpen Mire is not far off but it's better not to think about the Hound of the Baskervilles, or Black Dog and The Wild Hunt. On a truly dark night, when there's no moon and the stars are hidden by clouds, it can make you regret every horror film you've ever seen.

As the light fades the colour drains from the landscape and the stars begin to appear. There's no moon and no cloud, later there will be more stars than I've ever seen anywhere else. It's almost dark enough to start. The smaller Brown Trout are rising across the river, bats flit up and down, the night's insect life under attack from two directions. It does little to thin the clouds of midges, some of which try to fly up my nostrils. Insect repellant is a must, but even that doesn't stop the most determined among them. A thin patch of mist rolls downstream inches above the surface of the river. There's a heavy splash, as though someone has thrown a paving slab into the river. A silver-painted paving slab. That is a sea trout.

My pool is on a gentle bend with faster, shallower water at the head and tail. The sides of the valley are steep and the Tors behind them are marked by the burial cists of our ancient ancestors. They changed the landscape with fire and farming. Grazing livestock prevented felled trees from growing back and the composition of the soil was altered by the ashes. The stars are much the same. 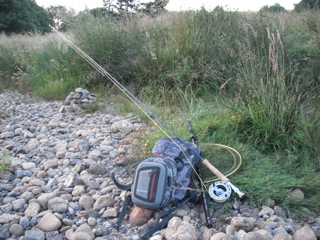 I fish the bottom first, casting and retrieving faster than the current through the deeper water. Nothing. I move up and fish the middle of the pool. It is slower water here and the line swings slowly across. Somewhere beneath the slick black of the surface the fly must be dancing in the currents. That fish jumped not far from here. My fingers feel the line for any deviations, a bump or pluck, anything that might be a signal to strike. Nothing.

You can change the fly and you can change the retrieve but the rest is up to the fish. As the temperature drops around midnight, the mist gets heavier, covering the fields and with it some of the hope fades. The air temperature has dropped so that the river feels bath water warm. A last few casts in the run above the pool and I'll pack it in for the night.

I cast across at an angle, where the faster current washes down into the head of the pool, let the fly swing round and flutter. As it hangs something hits it. Not the violent slash of a smaller fish but a more confident, heavy pull. I strike and the weight comes alive, breaking through the water surface, head shaking, landing with a splash. The fish runs downstream into the pool, pulling line from the reel as I fight with myself over how hard to apply pressure.

It seems inevitable that I will lose this first fish, being inexperienced in how to play them. Even so, I’m delighted to have finally hooked one, that a fly I tied has done the trick. 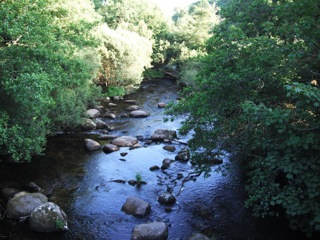 I’m lucky enough to have caught some decent wild Brown Trout, up to 1lb or thereabouts, but this is different. The pull on the string has more purpose to it, I’m not entirely in control. The fish runs into the pool, turns and jumps again before motoring upstream towards me. Now I'm stripping line by hand to stay in touch and keep ahead of the slack. Another jump and a pause, hanging in the current almost level with where I'm standing. A chance to reel in some line before the next surge. I realise that the net is behind me and some way upstream. Walking backwards, against the current, while trying to control the lunging Sea Trout is not ideal, but with perseverance I get into a position with the net in front of me, handle between the knees.

All that remains is to draw the fish over the net and lift. An easy task in daylight, not so in the middle of the night. Despite the splashing on the surface I find it hard to locate the exact position of my Sea Trout. The horror of a missed scoop unhooking the fish plays out in my imagination.

There she is, closer than expected, and bigger. I grab the handle of the net and reach out, lift, and there it is, the reassuring weight of the net tells me I've done it. I draw her in to shallower water for unhooking and a photo. A female fish of about 2lbs 7oz. Silver flanks contrast with dark spots, continuing on the back and fins, the mark of Salmo Trutta. Based on size she is probably three years old, having already returned once to the river last year. Three years ago I was in London, before making my own migration West.

Because they depend on cold water, England and Wales is about the southern limit of the Sea Trout's viable range. What effect could rising sea temperatures have on that? Sea Trout and Salmon numbers are not what they once were, on top of natural obstacles there are increasing man made challenges for them to overcome, weirs, pollution, nets. 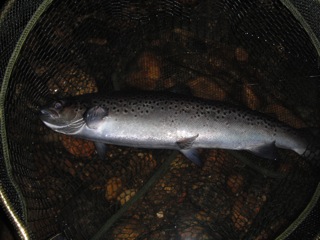 Einstein said: “If the bee disappeared off the face of the earth, man would only have four years left to live.”

I don’t doubt the importance of bees, but for me it is trout that matter. They've been in these rivers for tens of thousands of years, before our species evolved, if we lose them we'll have blown it. You can't recreate that kind of history.

I crouch down to hold her in the current and forget that I'm wearing hip boots not chest waders. Wet jeans. I don't care. I wait until she's ready to go and watch her disappear upstream, I hope she goes on to spawn many more times. I've been building towards this moment since the end of last season when I first saw Sea Trout jumping in a pool not far from here. It's taken nine months of hard work but there's no question that it's worth it. Firsts are notoriously memorable, first love, first kiss, first impression, this one will stay with me for the rest of my life. I've never been much of a morning person and fishing the night seems to fit well, like a comfortable pair of shoes. I snip off the fly and take down the rod. The meadow behind me is shrouded in mist that reflects the beam of my torch. It's easier to follow the path without it, grinning in the dark.