We're pleased to say Chadd VanZanten is back this month and he looks at why the fish are all under the water.

When I was in college, I worked as a sporting goods clerk at a department store. I’ll be the first to admit it was not the best place in town to get fishing gear or hunting rifles. The store was better known for apparel and housewares, and the sporting goods department was more of a holding area for guys who’d wandered away while their wives tried on clothes. 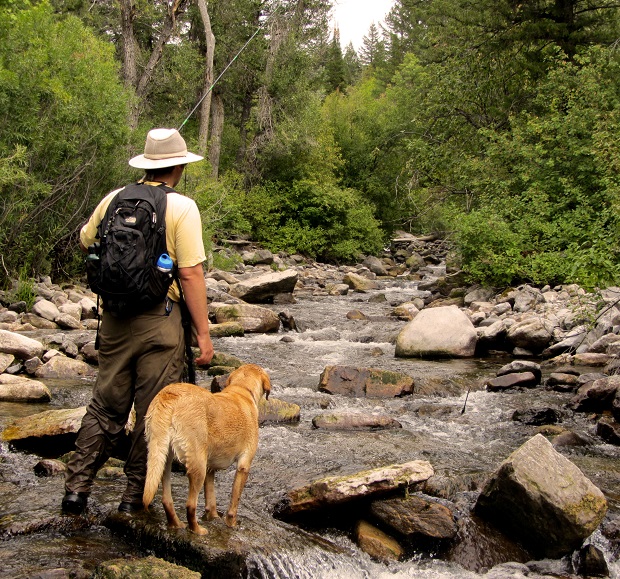 We didn’t have the amusement park amenities of today’s big-box outdoor retailers. There were no full-body taxidermy elk mounts nor giant aquariums of trout to keep the clientele occupied until someone came to collect them. One guy did bring in a smelly old stuffed jackalope at some point. It didn’t help. We hung up one of those fake rubber fish that sang rock-n-roll songs at you when you poked it, but that got old in a hurry, too.

So, we set up a little TV and played fishing videos all day. It was, literally, the least we could do.

The most popular videos at the time were about bass fishing—folksy programs with tragic production values but hosts colorful and enthusiastic. There was laid-back Jerry McKinnis, who hosted “The Fishin’ Hole,” which first aired in 1963 and ran continually for an astonishing 44 years. Then there was the self-effacing Tennessee boy Bill Dance, who would reel in a nine-pound bass in one scene and then fall out of his boat in the next. 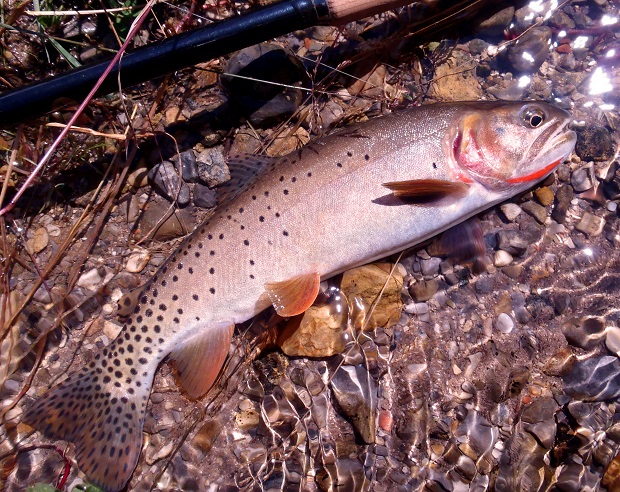 One show featured a scale model of a lake made of fiberglass and papier mache. It was perhaps nine feet across, with little fake trees and rocks all around. The lake’s surface was represented by a thin sheet of blue plastic on hinges. To show the viewer what lay beneath the water, the host lifted the plastic sheet like the hood of a truck.

I’ll never forget one line of the narration, which the host delivered with a southern twang and also quite without irony. As he opened his plastic lake to reveal the submerged treestumps and sandbars, he said, “The hardest part about fishing is that all the fish are under water.”

What I found most amusing about this bulletin is that it makes clear that “all” of the fish are under water. Not just some. Not most. All.

And yet the observation is not without value. If anything, it’s an understatement. It’s not just the hardest part of fishing, it’s one of the primary reasons we fish in the first place.

Humans have been transfixed by the watery world since the stone-age discovery that oceans and rivers harbor rich stocks of strange and slippery creatures that may, with a little effort, be coaxed from their homes. And then eaten.

In the past hundred years or so we have turned slightly more philosophical about our aquatic counterparts, even though we still know very little about what goes on beneath the waves. Only a few hundred yards down there are things going on that no human eyes have witnessed. 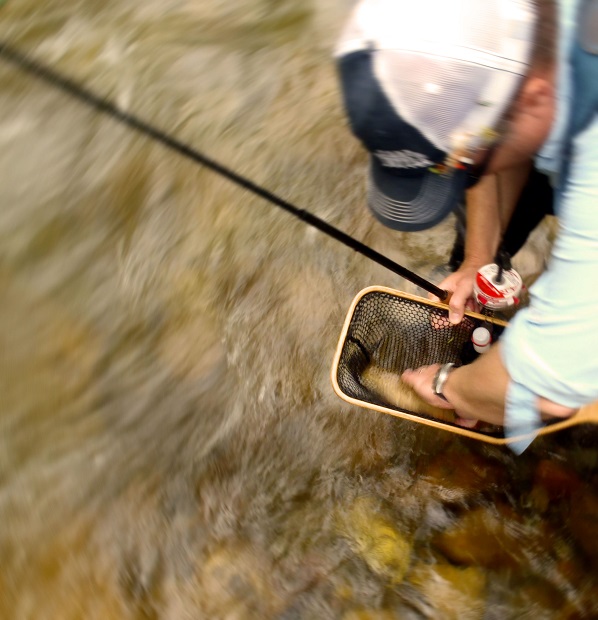 The trout and salmon are winning us over, gradually. They say it’s impossible to restore the trout and salmon populations that existed before widespread human settlement and development, but we’re at least building fewer dams, tearing some of them down, and helping fish get around the ones we need.

A couple hundred years ago, my homewaters teemed with Bonneville cutthroat trout, a fluvial species that grew to massive size in the mighty Bear River and choked the tributaries with its spawning runs. Then white settlers arrived in the 1850s. Their overfishing, deforestation, and water developments pushed the cutthroat to within sight of extirpation. A tiny remnant of the species survived, though no one knows how. Throughout the 1900s, well-meaning conservation agencies tried to revive the depleted Bear River fishery by planting exotic species considered more productive and sporty—brown trout, panfish, carp—and the native cutts somehow weathered that, too, though by then they were a remnant of a remnant. One hundred and fifty years later, as water and fish grow scarcer and scarcer across the West, we begin to cherish what was here to begin with. 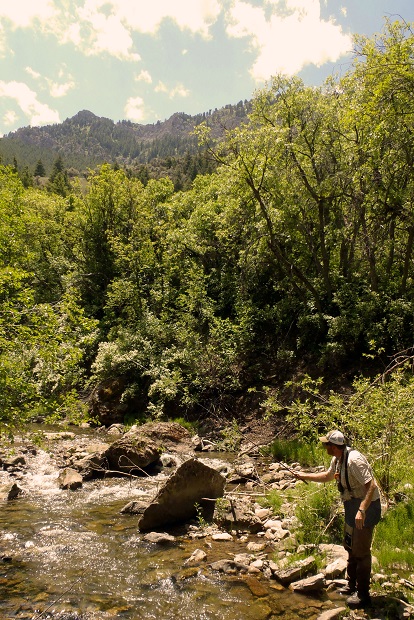 Whatever our stated motives, one reason we gather at the water’s edge is because we can’t exist beneath it. The thesis of the beforementioned fishing video might be better phrased like this: “The hardest thing about fishing is that all the people live on land.” All of us. We approach the shore to peer into the murk and perhaps dive in, but eventually we float to the top again. Even the most advanced underwater explorers merely cheat nature for short periods by creating small pockets of our world to take with them. There is no hinged hatchway to lift. We can never truly enter in.

We anglers connect with the aquatic world by hooking fish and bringing them to us, which places great demands on them. We deceive the fish, hassle them, force them into fighting for their lives. And we sometimes kill and eat them. I do what I can to compensate for my incursions—conservation efforts, mostly, with organizations like Trout Unlimited. If I pull some old tires from a riverbed, or help restore native fish to historic habitat, I feel like I’m clear to fish every so often. It’s a selfish and excessively human-oriented ideology, I know, but if I retreat too much further I just might talk myself out of fishing altogether.

When I was a young boy, of course, my opinion was more focused. I thought the fish existed to be captured. Outwitting and catching the quickest and most elusive of creatures on their own turf was a great achievement, the reward for which was possessing the fish, holding it in my hand to feel its weight and movement.

One day some time ago, I excused myself from work for that purpose—to hold a fish in my hand. I packed some provisions and headed for southeastern Idaho and the Cub River, which emerges from the side of a mountain as if a thirsty Moses had struck the rock there.

The Cub is small water. It drains only about 30 square miles of arid Idaho mountain range and seldom runs higher than 700 cfs at peak flow. Fittingly, it’s a tributary to the Bear River. But the Cub is well secluded, and although it can be brushy and challenging, the odds of landing a one-pound cutthroat in full, post-spawn livery are reasonable. 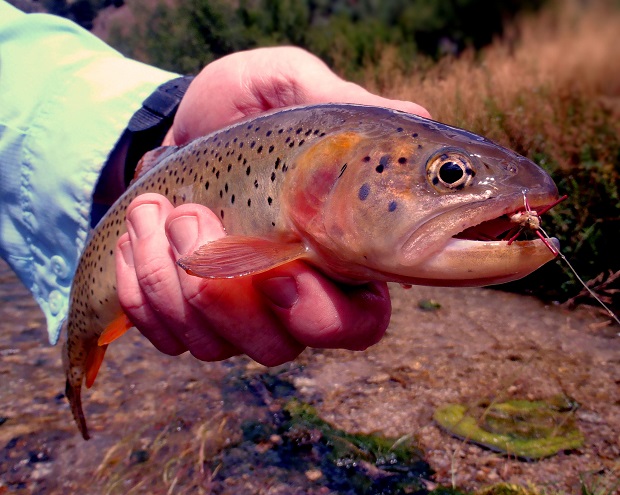 The water was somewhat colored that day, and I saw no risers. It was not a day for sight-fishing. Instead, I prospected likely holding water to induce strikes by fish guessed at but unseen. I floated my fly over one such spot without success, and then I fished out the cast not because I thought there might be a fish further downstream, but out of habit. However, as the fly glided over the shallower, less-promising water, the gravelly streambed quavered, resolved into a cutthroat trout, and rose up. This fish was not just an inhabitant of the stream but an actual unpieced sliver of it.

I didn’t know this when I was young, but I have since learned the true satisfaction of fishing is less about cleverness and control, and more about bridging air and water. That’s why I want to see the fish take a dry fly from the surface, and why I holler when a big fish leaps into the air.

As long as a fish is on my line, we are connected between two worlds.

When I placed the cutthroat back into the tea-colored water, he sidled sleepily away from the bank. After a few seconds the fish seemed to awaken, and he darted back to his midcurrent lie with the urgency only a fleeing trout can exhibit. When he stopped, his edges vanished and he was lost from my view. The trout which lay cool and slick in my hand only a few seconds before joined the stream again.

Nowadays it is not as important for me to hold the fish as it is to watch him return to his water.  No matter how many times this happens, communing with a creature that has crossed from one world to another and back again is reassuring in ways that are difficult to explain. Answers lie in such communion. It may in fact say something about the future of our souls.

Chadd would like to thank Jason and Lorry Reed for the lead off picture in his article.

Read more from Chadd via his blog