Peter Anderson heads over to Wales to fish a few of the beats on the Usk.

The Usk has a red tinge, running over sandstone, and a reputation as one of the best trout rivers in the UK. I have fished it a few times but this beautiful river deserves an article from a regular, somebody who knows and loves the Red River a whole lot better than I do! However, in the absence of that, here are some notes about the beats I have fished and how I found them. I will head downstream and all the beats (with one exception) are available via the booking office of the Wye & Usk Foundation.

There are a number of beats upstream of Penpont, the highest being Pantysgallog which looks pretty wild.  Cefn Rhosan Fawr at Sennybridge looks particularly attractive and includes small stream fishing on the tributaries Senni and Cilieni.  Penpont, though, marks the upper limit of my Usk fishing.  I was in a party of four and it was early April.  After a spell of inactivity resulting from the close season we were all keen to get out.  It happens every year. It was absolutely freezing. We blanked. I spent the morning struggling to wade a particularly rocky section without seeing a fish. As the temperature approached double figures (it never got there!) the odd fish came up and I switched to a dry. I managed to rise two fish and missed them both. The fist I think came as a shock, although my cast was good, to a fish that had been steadily picking off emergers. It took but it all seemed to be happening to somebody else and I was an observer rather than a participant. When the brain finally got into gear and transmitted the message that it would be a good idea to strike, the fish was long gone. Embarrassing! My mate was watching from the bank….."A bit slow on the strike there, Pete" he said laconically. Hmmmmm. The other take I missed was the result of some ill-advised wading without a staff to cover a rising fish. It took alright but I was busy trying not to fall in. I was standing on a slab of smooth, slanting bedrock and I was sliding forward. With a ducking looming I was not too concerned about the fish! A good lesson here for fishing the Usk – the wading can be murder, I always use a staff and my wading vest incorporates a life jacket…..better safe than sorry. 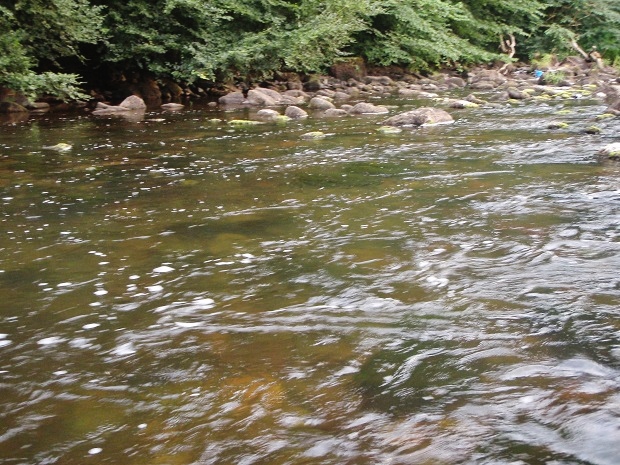 I haven’t fished this beat. I have tried though. I reckon that I have now been flooded off three times. Another lesson, especially for those travelling a long way, the Usk can come up in a flash, fine the evening before, unfishable on the day. Be warned!

A very nice beat owned by the Gliffaes Hotel. Four of us had an afternoon on the water with a guide. He told us that the river was not accessible from the right bank as usual because the road was closed. We would have to park on the left bank and wade across. The wading “could be interesting” he said!  When a guide says the wading could be interesting he means it will be terrifying! Actually it wasn’t as bad as we feared. By using the wading staff and clinging onto each other, we all got across. And it was worth it.  Lovely water, pools, glides and riffles. We all caught and my mate Dick had a cracking wild fish of around 2lbs on a nymph. Well worth a visit.

There are 3 beats in the grounds of the hotel, I fished the middle beat one evening in July. It had been very hot during the day and the temperature remained above 20 degrees. I fished the deep, fast pools with a heavy nymph and picked up a couple of small fish. A switch to the duo in the shallower riffles produced another couple. A good fish came off after it savaged the dry and another good fish came adrift on the nymph. It is a nice beat, well worth a trip, horse flies were a nuisance though! When you finish, hot and happy, the bar at the hotel is ready and waiting! 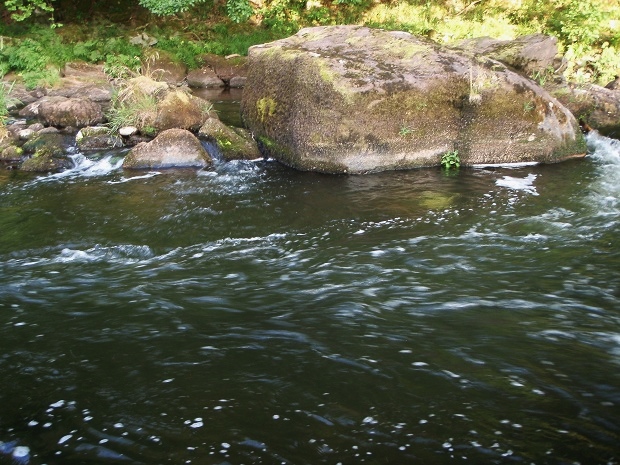 This is expensive and it is stocked. I have fished it a few times, indeed my first trip to the Usk was on this beat and I had a fish first cast (that was it for the day though).  It is in two parts, you fish the upper beat in the morning and the lower beat in the afternoon. I have had plenty of fish from here and all methods are effective. Lots on the dry (particularly in the pool just below the bridge) but also on the heavy nymph in the deep runs and quite a few to spiders fished down and across. The wading isn’t too bad either, obviously it’s not chalk stream wading but by normal Usk standards it’s fine.

Supposedly some of the best trout fishing on the middle Usk. I worked hard all day for two small fish but, to be fair, I lost a cracker, probably around 2lbs or so which came off as I was about to net it after a five minute fight. Availability is limited and it is quite expensive but there are good fish in there! Easy wading too. 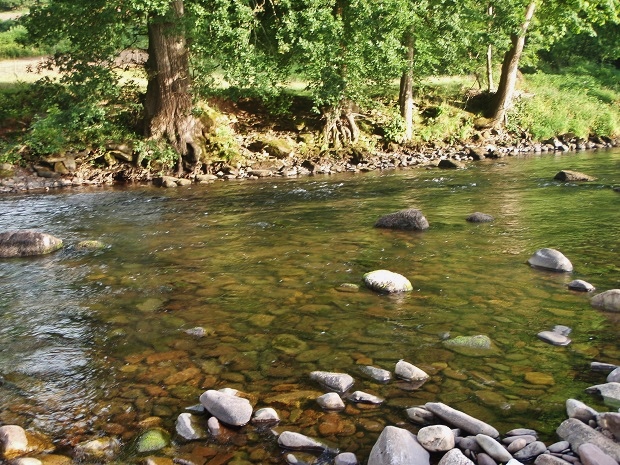 This isn’t a WUF beat, it is a Merthyr Tydfil beat but is available on day ticket. A very nice piece of water too and easy wading by Usk standards. It was a lovely June day and we had some great sport picking up fish on both nymph and dry. Well worth a trip.

So there we have it, my potted tour of the Usk. It is a wonderful, productive, exciting river. Give it a go.

More details of the Wye and Usk Foundation HERE

Read more from Peter Anderson via his excellent blog