Vince Brandon take us to Switzerland in search of trout. Was he successful? Read on.

A kind invitation given on a fishing forum meant that my annual visit to my wife's family in Switzerland would now include a diversionary fishing trip. Malik Mazbouri, a Swiss instructor of the Italian casting school (Scuola Italiania di Pesca a Mosca - SIM www.simfly.it and www.simfly.ch) had asked if I would like to fish the Gadmerwasser in the Canton of Bern with him. With some dates agreed, we met in Bern and spent a fine evening eating, drinking and talking fishing.  During our conversation, I learnt that in addition to speaking English, French and German, Malik had also needed to learn Italian to take his instructor exams!

We travelled the following morning through breathtaking scenery through Interlaken to our eventual destination at the Reichanbach Lodge.  Here we collected my fishing license and I was issued with a guest ticket for the Oberhasli Fishing Club waters. The lodge is the base of Kurt and Vreni Zumbrunn-Mathyer and is situated below the famous Reichenbachfall, where Sherlock Holmes and the notorious Dr. Moriarty allegedly met their maker, although the bodies were never found.  From this beautiful location, Kurt and Vreni host and organise guided fishing trips, build top quality bamboo fly rods and in their spare time are active members of the Oberhasli Fishing Club with Kurt currently acting as the Chairman of this society.

Although I wanted to thank Kurt personally for authorising my guest ticket, he was busy guiding on the Gental Water, an area that is well known for its large native trout. However, Vreni was available to brief Malik on the recent fishing conditions while I had my nose in the mouth-watering collection of cane rods that surrounded the walls and inspected the framed fly collections donated by previous lodge guests.  After a quick guided tour of the comfortable lodges, we travelled the short distance to the river. 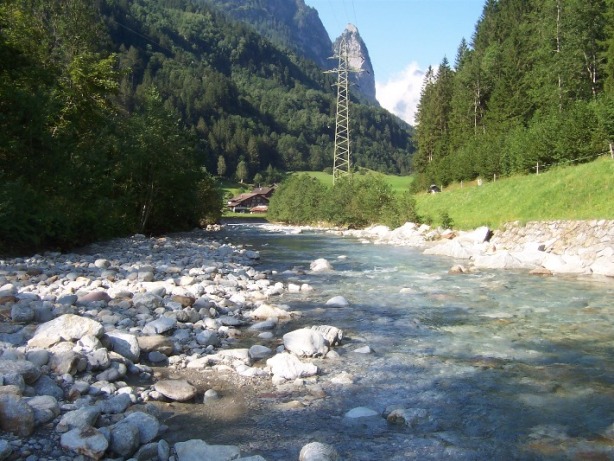 Like many of Europe’s rivers in mid August, the Gadmerwasser was showing its bones. At home, a temperature of 30 degrees and clear blue skies would see me filling the fridge with beer and warming up the BBQ but Malik explained that the mountain waters behaved differently to my lowland streams and that we had a good chance of fish. To familiarise myself with the loaned 8ft fast action rod with a 13ft leader terminated by one of his own dry flies, Malik provided me with a quick tutorial on the basics of the TLT Italian Style Casting until he was sure that I would be more of a danger to the fish than myself. Comedy moments aside, I have to admit to being impressed by the ability to control drag and place the fly in seemingly inaccessible spots, it is a method well suited to this environment. Over the next couple of hours, Malik had caught a beautifully marked fish, while I contrived to miss a few rises. 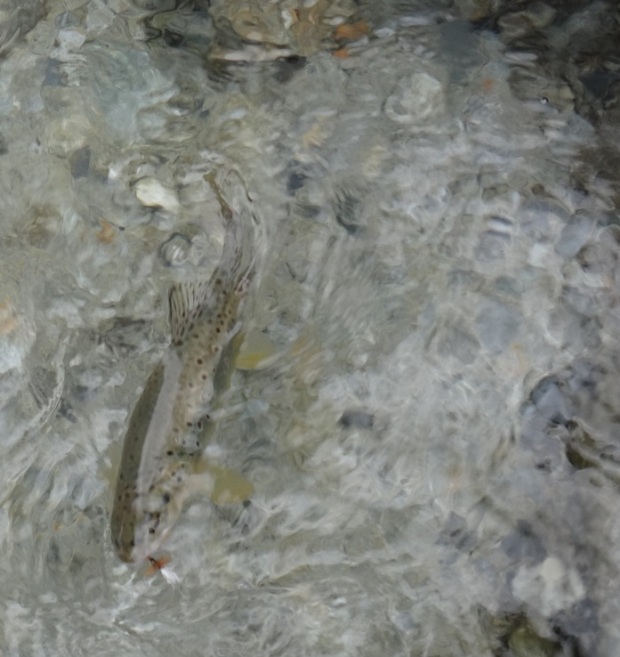 As anyone who has hosted a guest knows, you are always desperate for your home waters to perform and Malik decided to divert to a nearby tributary stream to see if there would be more activity under the bushy trees, although I must admit the thought of trying to control the long leader in those conditions worried me a little. 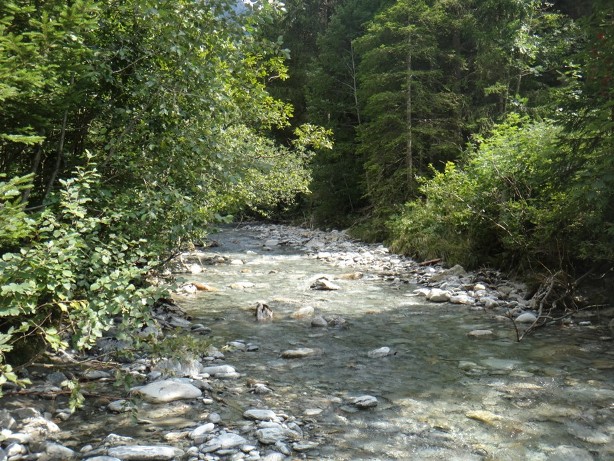 Maliks instincts were correct and the pocket water of this small stream produced many belligerent fish that slashed at the fly in water that was sometimes not even ankle deep. Anyone that has fished small streams in remote locations knows how easy it is to become lost in the moment and lose track of time as every inch of water could contain a fish and there is always another spot just a bit further on. 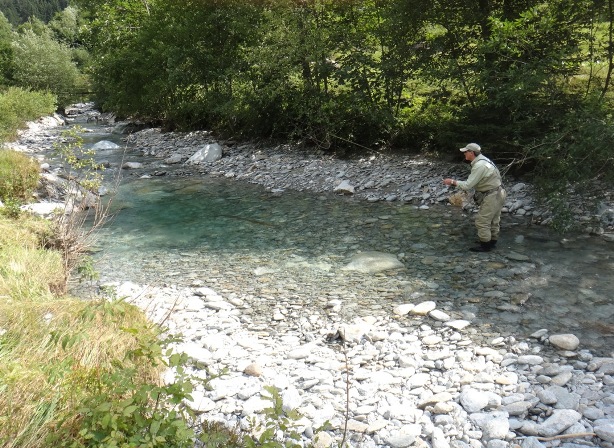 As the sun reached its zenith, we retired for beer and sandwiches and to explore subjects that only anglers with a beer in their hand can think up, such as the newly discovered tree knots and a wonderful device used by generations of mountain men to dry their flies. I hope to market this discovery in the UK for the bargain price of £30. 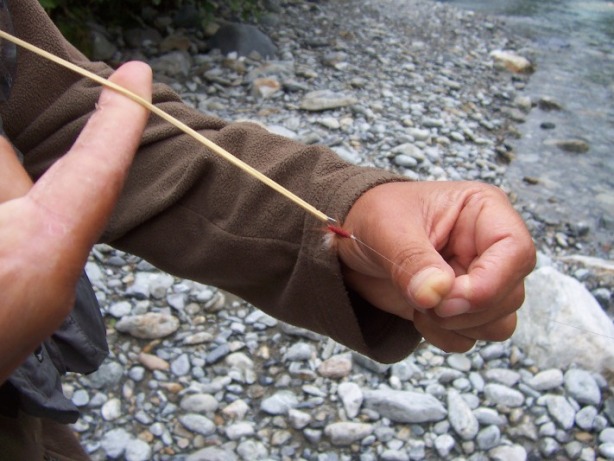 With lunch out of the way, we returned to a wider stretch of the main river that enabled us to fish simultaneously. It is at times like this where there are real benefits to being a natural left-hander. 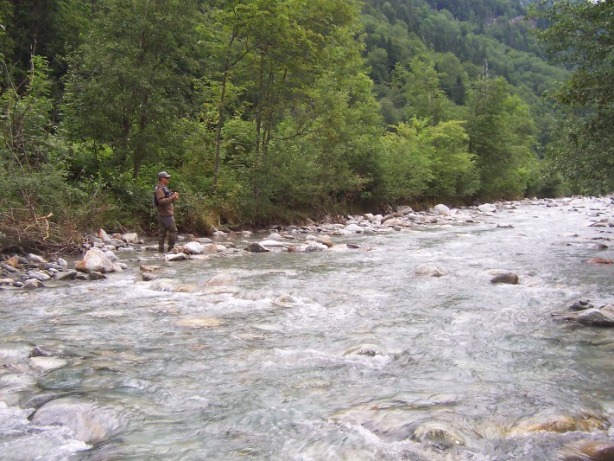 The river now produced fish at the same rate as the stream had earlier and at one point, I looked up from playing a fish to see Malik doing the same. These alpine trout were much lighter in colour than the buttery yellows and browns of my local trout and were difficult to see even in the shallow waters. 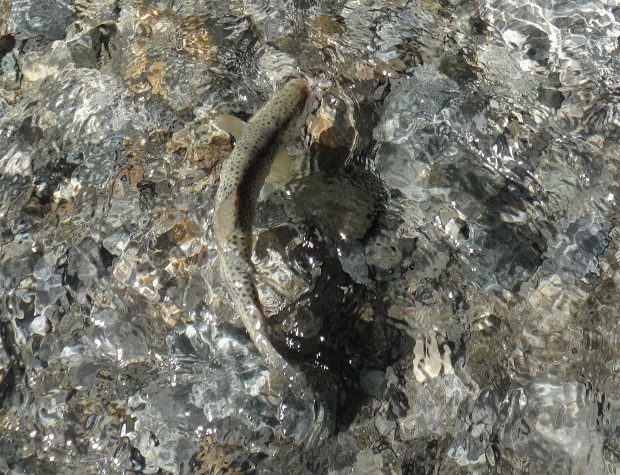 As the light fell, I had long ago lost count of the number of fish we had caught but had noticed that the size was increasing as they gained confidence. It was now becoming difficult for me to pick out the flies on the water although the fish did not seem to share my difficulties. There also appeared to be some sedge on the water, the takes were fast, and violent as the trout took the opportunity to feed, perhaps the harsh winters at this altitude conditions their responses. 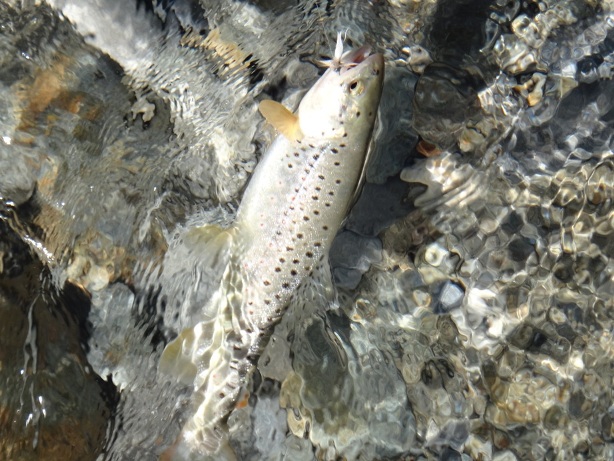 At the last knockings, one of Malik's donated Royal Coachmans was taken by a fit fish that was easily over 14 inches and took me all over a deep pool. Unfortunately, this camera shy fish threw himself off the barbless hook and it seemed a good point to go for a fine pizza washed down with a cool white wine. As I left the water, I considered where Holmes and Moriarty ended up having tumbled into the Reichenbachfall and decided that there had been no fight to the death. In my opinion, this was a story these masterminds had concocted to cover the fact that they had gone fishing in the Gadmerwasser and did not want to go home. If that were true, I could empathise with them, as the hospitality shown to me by Malik, Kurt and Vreni was outstanding and it is occasions like this that bring home to you that fishing is not really about the fish but the people you meet and the locations that it takes you to.

I have been going to Switzerland for many years but learnt more about the fishing there that day than I had in the last 20 years. The Canton of Bern has over 12,000 km of rivers, small mountain lakes, 3 very large lakes and some reservoirs that are home to a range of salmonids including whitefish, grayling, char, brown and lake trout. However, the fishing laws in Switzerland are quite complex and I would strongly recommend using guides like Kurt to gain access to the better waters. Details of the lodge and guides can be found at: