Daran Sadler joined us down on Montana and took his Tenkara rod. On one of the days he thought he'd give it a try and here he tells us how he got on.

Montana. Big Sky country. The Yellowstone. The Madison. The Missouri. "A River runs through it". To many anglers those words evoke images of clear, bright rivers under endless skies; of large brown trout supping dry flies and of the beautifully-marked Cutthroat rising suspiciously to inspect the angler's offering. With thousands of miles of world class rivers, awesome spring creeks, and hundreds of small rivers all with good access in a setting where there seems to be a fly shop, or two, on every street, Montana could be close to fly fishing paradise. Very close. 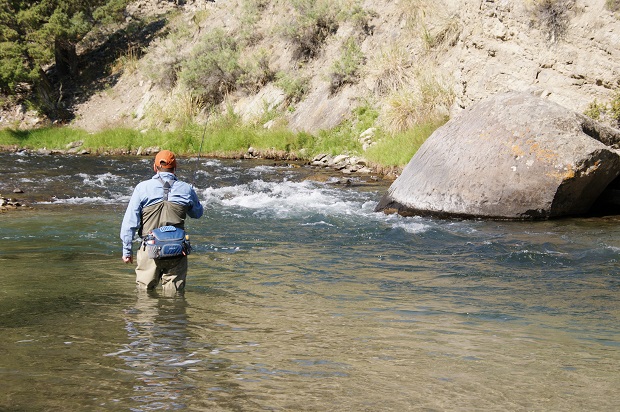 What Montana isn't usually associated with is Tenkara, the traditional Japanese method of fishing mountain streams using a long, light rod and developed by commercial fishers hundreds of years ago. Having become increasingly interested in Tenkara for fishing the freestone rivers of northern England, I'd taken my rod and traditional Japanese flies to Montana on a trip in August 2012. A successful afternoon catching small rainbows and brown trout on the Gallatin river around Bozeman had convinced me of the viability of this method on the rivers in Montana. So, when invited to return to Montana for a week as part of an organised trip in August 2013, I made sure my Tenkara rod, level line and reverse-hackled (sakasa kebari) flies were safely packed in my case. 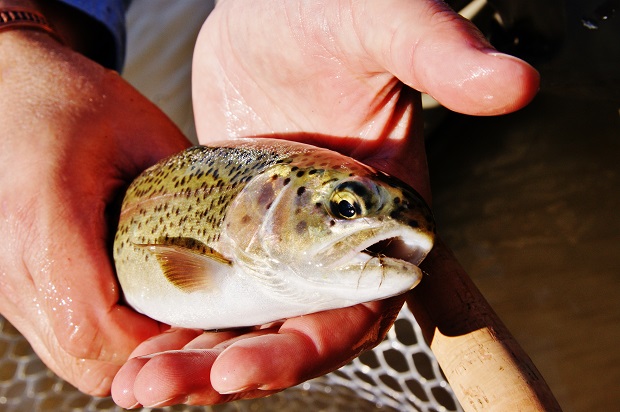 The trip was organised by Fly Odyssey and hosted by Pete Tyjas. During the week long trip our small group experienced a variety of exceptional fishing. From a drift boat on the Yellowstone river, to the De Puys spring creek, to fishing small rivers in Yellowstone Park we were able to practice dry fly, "hopper and dropper", nymphing and even fishing with streamers. My particular challenge was to try and complete a "Montana slam" on a Tenkara rod, all from the same river, in one day. The slam consists of the native Cutthroat trout and Mountain Whitefish and the non-native Brook, Brown and Rainbow trouts. The first objective was to pick a river which held all these species in sufficient quantities to have a reasonable chance of success. Discussion with our guide, Eric, led us to a section of the Gardner river, a tributary of the Yellowstone, just inside Yellowstone Park. The Gardner begins life in the mountains to the west of the town of Mammoth, near the North Entrance to the park, and less than an hour's drive from our accommodation near Emigrant. Named after Johnson Gardner, who trapped for furs in 1830's Montana, the Gardner is famous for its geothermal features at Mammoth Hot Springs. In its lower section the Gardner consists of a series of good runs, riffles and some enticing, deep pools.  On parking our vehicles, we hiked for about 30 minutes along a trail through an arid forest to the stretch of river our guide had picked for us. In front of us was a gently sloping sand bar leading to a deep drop off into about 8 feet of water. Rocks could be seen at the bottom of the run and, more thrillingly, large dark shapes moving languidly in the clear water.  Fish! 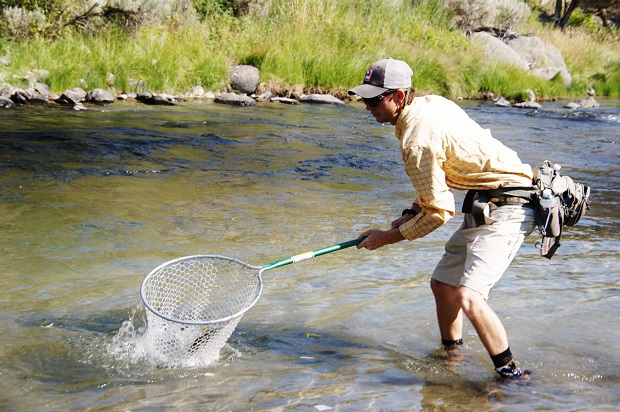 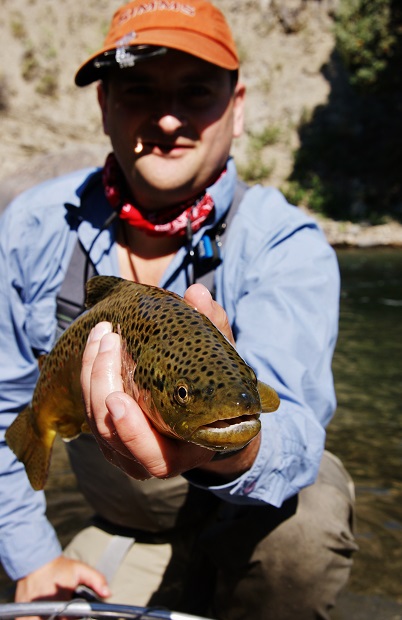 Our excitement was palpable as we assembled our tackle. My fishing partners, Pete and Richard, were fishing with more traditional rod and reel set-ups and moved up and down stream from me, but I unpacked my 12ft Iwana Tenkara rod and considered the best way to tackle the deep pool. WIth little fly life visible and no rising fish, the question was how to get a fly down to the fish and detect any takes. I decided to borrow from recent experiments with French Nymphing and to the 10ft of fluorocarbon level-line tied to the rod's lillian I attached a short braided, orange indicator. To the indicator I attached 8 feet of 5x tippet with a dropper about 2 feet from the point. To get my fly down into the feeding zone I chose a tungsten-beaded nymph: a home-tied, size 14 red-tag with a CDC hackle that works well on my home river.  To the dropper I tied a Partridge and Yellow spider, with the hackle tied in reverse to flare out over the eye hook.

Although not an entirely traditional way of setting up a Tenkara rig, I was confident the combination of heavy nymph and indicator was needed to successfully fish my flies down in the taking zone and detect any subtle takes.

Approaching the edge of the pool with Eric, our guide, I started to cast the flies upstream into the edge of faster water. Eric explained that this single pool could hold all of the fish I was looking for and would probably contain some large specimens, especially of brown trout. The long, light Tenkara rod is really designed for taking small fish from mountain streams but, having landed Grayling to 2lb in the UK, I was confident it could handle what I might encounter here. After only two or three casts the indicator stopped and a gentle strike found me hooked into my first fish. A very brief struggle ended with whatever was attached to the other end snagging me behind a rock and slipping the fly. This gave me confidence that my setup was right to hook fish, but also gave me my first inkling that accomplishing my challenge of the slam may not be straight forward. Two casts later and once again the indicator deviated from its path. Another gentle lift of the rod and a solid, thumping response from a hooked fish was returned. The deep bend in the rod indicated that this was a good fish and the head-shaking suggested a big Brown trout. A few minutes of uncertainty eventually led to Eric slipping the net under a beautiful 19in Brown trout.  My pleasure at the sight of the fish in the net was only increased when I realised it had taken the sakasa kebari fly. After posing for photographs we slipped the trout back into the cool water and watched it swim back into the depths of the pool. Challenge Part One successfully achieved! 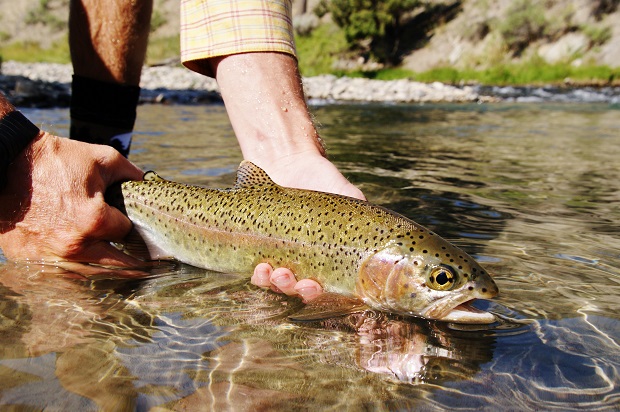 Although fish continued to be taken on the Tenkara rod, with the Rainbow trout and Mountain Whitefish soon being ticked off the list, a clear pattern began to emerge. A change in fly often bought an almost immediate response but after a few minutes takes would dry up. These were clearly fish who wised up to a fly pretty quickly! Fly pattern didn't actually seem too important as Prince nymphs, Pheasant Tails, Hare's Ears and some of my more experimental patterns all brought positive reactions from the fish. Changing bead colour from black to copper to orange also didn't put the fish off, with depth and a drag-free drift seeming to be the most critical factor in getting a take. The combination of the tungsten-beaded nymph and having no line on the water to cause drag provided a winning combination and I was very impressed with how well the Tenkara rod adapted to the situation. Frequent changes of fly ensured a steady stream of Brown and Rainbow trout and Mountain Whitefish came to to the net, all between 14 and 17 inches, great fishing! The light Tenkara rod was coping admirably with these large fish and was perfectly able to pull them up from the depths of the pool. Whilst I was enjoying the fishing, the Brook and Cutthroat trout were remaining elusive and I was becoming concerned that my challenge was in danger of being unfulfilled. Upstream and downstream of me, Pete and Richard had both had Brook and Cutthroat trout, so a change in location was agreed to. They also wanted a fair shot at some of the bigger fish in the deep pool I had been hogging for the morning! Eric moved me upstream and a short session flicking a single fly into shallow pocket water soon had a beautiful trout to hand, its white-edged fins and red spots clearly marking this out as a Brook trout. So, now only the Cutthroat remained to complete the challenge. 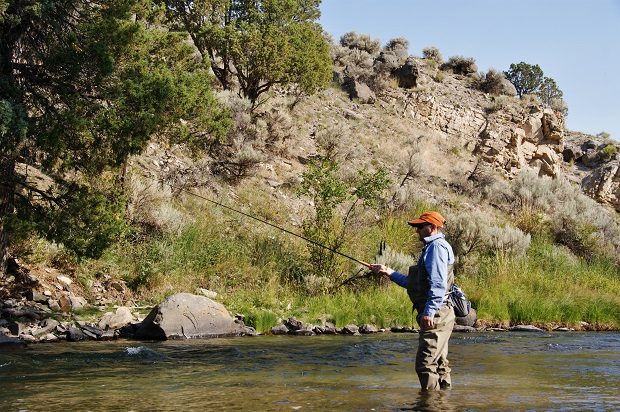 Again, Eric moved me upstream to another deep pool, this time with a "guarantee" of Cutthroat trout in residence. With less than 30 minutes of fishing left before we had to leave the pressure to catch was well and truly on. What followed was some of the most frantic and thrilling fishing of the whole trip. In 20 minutes I landed 11 fish and lost one at the net. The killing fly was the San Juan Worm, an often derided tying but one which certainly encourages takes. So, did I accomplish the challenge? Well, a variety of Brown and Rainbow trout to 16 inches were landed, Mountain Whitefish to 15 inches and even a hybrid "Cutt-Bow", the offspring of a Cutthroat and Rainbow that displays the most striking markings of both. And the Cutthroat?  Well, remember the fish I said was lost before it was netted...