We might be turning our thoughts to rising trout in the next few weeks but carp are also on Nick's fly fishing agenda. He shares a pattern that works for him when the carp are looking skywards.

At this time of year I begin to look forward to the first warm days of late spring and early summer which bring the start of the carp fly fishing season. I love all forms of fly fishing in fresh and salt water, but dry fly fishing is definitely my favourite variation of the art. Spring and summer give me the choice to be casting a tiny F-fly on a 3wt for trout, or something altogether meatier on a 7wt for carp; both have the key element which make dry fly fishing so exciting - the visual take. Deceiving a wild brown trout with an imitative pattern presented precisely on a fine tippet is undoubtably one of the finer moments of fly fishing, but for visceral excitement hooking a double figure carp on the surface and hearing your reel scream as it empties down into the backing is hard to beat.

The Carp Stimulator family of variants were designed to give robust flies that would stand up to the rigours of carp fishing and float a good strong hook. The Hanak H500 is a forged hook with a wickedly sharp point and a large straight eye which I seem to be using more than my previous favourite hook for carp dry flies, the Tiemco TMC2499SP. I think hook choice can often be more important in tying a good carp fly than it is for trout flies; the hook needs to be light enough not to sink a surface pattern but strong enough not to straighten out when putting pressure on a big common carp that wants to charge into the lilies or underwater branches in snaggy water. 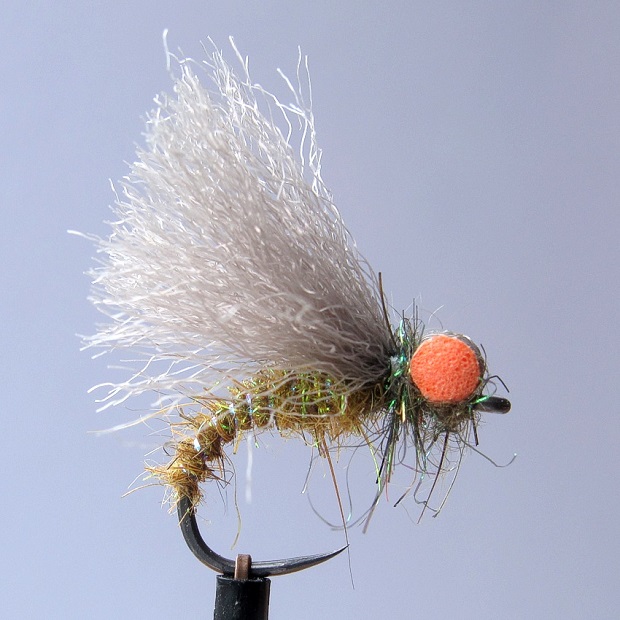 If you want to add legs for added vibrational stimulation tie them in on either side of the body after step 6 and then continue at step 7. If you want to add a foam head for extra buoyancy then catch in a length of 6mm foam projecting over the eye before you tie in the wing material at step 3. Carry on with steps 4 to 6 and then fold back the foam and tie down to form the foam head. Continue at step 7 to finish the fly. 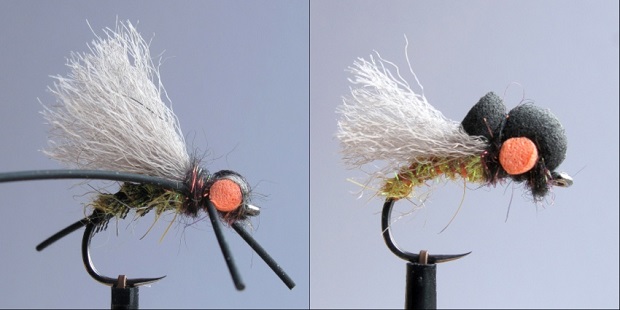 These are impressionistic patterns rather than imitations of any particular insect; they can look like an emerging aquatic fly or a terrestrial blown on to the water, in any case they look like food to carp and if presented right will be slurped down with gusto. The foam eyes provide a little buoyancy at the head which allows me to pull the fly under to make sure the degreased fluorocarbon tippet is sunk and then have the fly pop back up to the surface. Lots of anglers advocate using nylon or copolymer for fishing dry flies claiming that fluorocarbon sinks their flies. I'll admit that getting a fly to float consistently is more difficult with fluorocarbon, but with the right hook size and strength to weight ratio and using a good design and materials it's possible to make flies that will float all day, whether they are big carp patterns or tiny trout dries. The acid test for me in any dry fly design is that I can deliberately pull the fly under the surface and see it return to floating with the leader dead straight and hidden out of the surface film. It's all about confidence really; if a fly will behave that way then I know that if it's fishing in an area of heavy ripple or if the light is bad and I can't see it properly then I know it hasn't quietly sunk below the surface and I'm not wasting my time waiting for a rise that's never going to come.

I like to fish these flies around the margins prospecting for carp lying close in to reed beds, close to overhanging trees and other places where the fish may have retreated from anglers chucking heavy leads or float controllers out in open water. It pays never to dismiss a spot that may hold a fish or two. On one lake I fish the inlet stream enters through a long narrow channel which is nowhere more than a couple of feet wide, but can be fished by careful side casting from the mouth of the inlet. Landing the fly with a plop has got me several fish from here as the carp rise confidently within seconds of the fly landing. 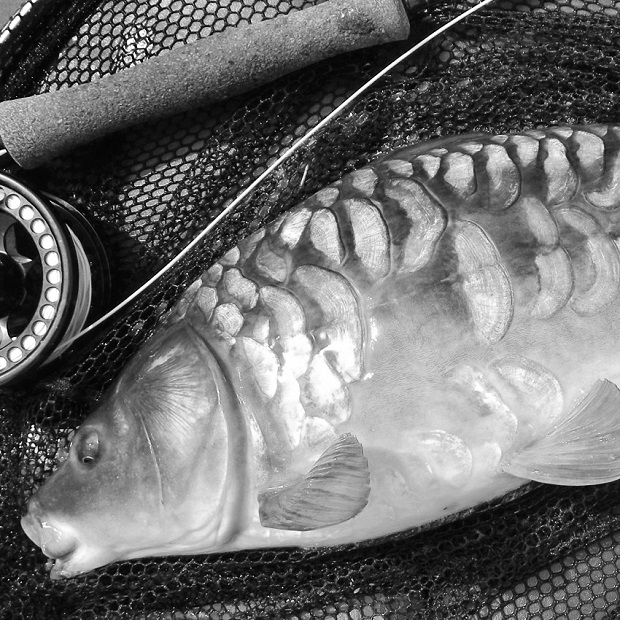 It's commonly thought that carp flies should be fished static and while that is generally true if you're fishing a bait imitation like a deer hair dog biscuit, I have found that when the fish are being fussy and constantly inspecting and rejecting flies, a small amount of movement can stimulate a take. If you are casting to difficult fish and you see a carp surfacing to your fly you can either do nothing and just hope the fish will take the fly or you can gently twitch the fly by an inch or so. Often, sensing that it has missed the potential food, the fish will move forward and try again. If at this stage you can hold your nerve and move the fly again, the fish may move forward and inhale the fly with confidence and you'll see your fly disappear, the floating leader slide away and then the line screams off. I've done this many times and when it works you can imagine the carp thinking "missed it, damn missed it again, got it, whoa.....run". Give it a go; induced takes are not just for trout.