Until my move to Australia last year the only fish that I had caught, other than trout, was a 4lb chub that I accidentally caught on the upper sections of the Welsh River Wye. As interesting a variation as that was, for me fly fishing was all about trout, preferably on a small stream. However, as luck would have it, my job brought me to Queensland – one of the few states in Australia that does not have trout in its creeks and rivers. Seeing an opportunity to try out catching other species of fish, I joined the Brisbane Fly Fishing Club and soon received an interesting challenge.

“Arr wait until you’ve felt a tuna on your line mate, you’ll soon forget all about those trout”. The challenge was not left hanging but was followed up by a very generous offer to accompany the challenger, Brad, on his boat the next time he went out “chasin’ tuna”. As it was, there were a few false starts to my becoming a successful saltwater fly fisher. But that all changed when Brad offered me a place on a very special trip to Fraser Island, a tropical island paradise north of Brisbane. 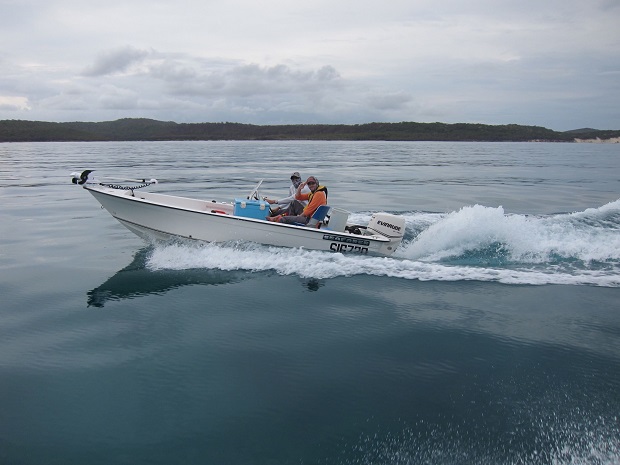 Fully loaded and heading off to our camp on Fraser Island.

On paper, fly fishing for tuna is not too dissimilar to fly fishing for trout, its just everything is scaled right up. Yet somehow the practice felt as far as I did from the English streams of home. Until I arrived in Aus I’d only once fished with a rod as heavy as a six weight and rarely with flies larger than size eight – my usual set-up being a seven foot three weight and size 16 to 20 flies. So a nine weight and size 1/0 and 2/0 flies took some getting used to - as did the need to cast a real distance. I’d never gone in for macho displays of long casting, preferring position and presentation. As I was to learn, the same went for chasing tuna, but getting my head around the new distances involved – usually a minimum of 30 to 40 feet – needed psychological adjustments as much as learning the more square-stanced casting technique. 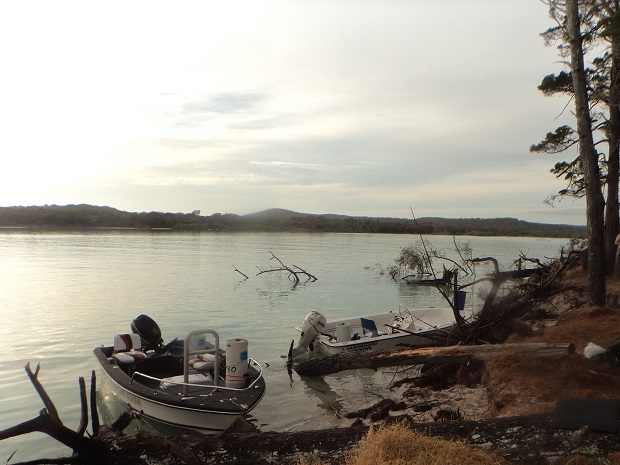 Dawn over the camp.

I needn’t have worried however. Fraser island was to provide plenty of opportunities for me to find new and decreasingly amusing ways to mess-up catching a tuna and to test the patience of Graeme, whose boat I was on for the trip. As the first day progressed the bait balls of tuna seemed to grow in size and frequency. Graeme hooked-up on several occasions, but lost around 50 percent to whalers (relatives of the bull shark). Back on the chalk streams, I once nearly lost a small trout to a pike - but somehow this phenomenon was slightly more disturbing! Watching Graeme’s physical battle with the tuna also filled me with as much dread as it did excited anticipation. Should I have been going to the gym in the weeks before? 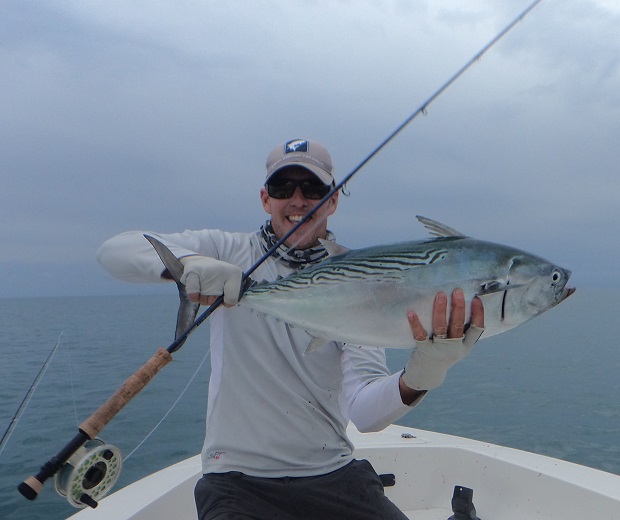 As with stalking trout, when fishing for tuna you need to be able to read the water and fish behaviour, to approach the fish from the correct angle, and – most of all – to have patience. Finding tuna meant first finding the birds tracking the tuna. Follow the birds and, with luck, you will find a ‘bait ball’. You then need to approach the tuna in a way that can only really be described as stalking. As on my numerous attempts before, this meant I was stood poised at the bow of the boat, 15 to 20 foot of line trailing behind, anchored to the water ready to load the rod for the one false cast forward that I would take. I’d already learnt that I would not have time for two or three false casts. I’d be lucky to get one shot at the tuna as they raced by at 60mph smashing bait, before sinking to the depths to start corralling another school of bait fish to the surface. The boat had to drift towards the bait ball almost imperceptibly – too fast and we’d spook the tuna; too slow and it’d be over before we got there. I would try to fix my eyes on the churning water, not daring to blink, as I knew I’d miss something as the tuna flashed by. In the chaos of the churn I would try to track the direction the tuna were moving, hoping to predict where they would surface next. If that prediction was within casting range I’d have to go for it. Think twice about it and they would be behind us before I could kick myself.

So it went, bait ball after mesmerising bait ball I tried to hook a tuna. However, I couldn’t quite get it all right until, as the day drew on, Graeme slid us into another perfect position and something – for that brief moment – clicked. False cast forward; false cast back and haul; cast forwards and haul. As soon as the line hit the water I started stripping, rod tucked under my arm, both hands pumping, the fly needing action to work. A tuna spots it; it locks on, and thump. I recall the instructions given to me in anticipation of this moment, “Don’t set, John. It's not a trout – you’ll snap the rod. Just keep stripping” (if I could). THUMP. Fizzzzzzzz. 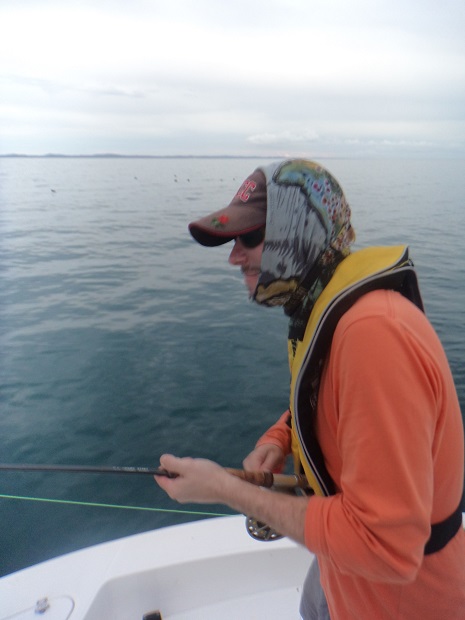 Haul and wind! Working hard to bring a tuna in.

The line zipped out of my hand, burning my fingers as I was holding ever so too tightly. I held the rod high in one hand and then stripped line high in the other, praying there were no knots and that it was not tangled on some random part of the boat or my body. Certain disaster avoided I’m on the reel in seconds. FIZZZZZZZZZZ. A beautiful sound I’d heard before, but this reel sang at a pitch of unfamiliar intensity. The fly line is gone in moments – my jaw drops, until this point I’d half thought backing was just something to bulk up the reel. Now I was wondering if I had enough?! Through the thumping of blood in my ears and the screaming reel I hear the instruction to tighten the drag a little. But I daren’t take either hand off the rod. Graeme provides the necessary assistance and a hearty pat on the back that almost topples me into the sea; we are both beaming that I’ve finally hooked-up.

This was only the beginning. The real battle began as the reel’s ferocious spinning started to slow. Tucking the butt of the rod into the bottom of my life vest (grateful for the extra padding), I hauled back on the rod, before winding in as much line as fast as I could. Haul back, and wind; haul, wind; haul, wind. Foot after foot was slowly reclaimed. What seemed like an age passed before I could see the fly line again. A few more hauls and it reached the tip of the rod. Thump. THUMP. Fiiiizzzzzzz. My heart sank. My thumb throbbed, as the reel handle wurred onto it. Those tens of feet I’d sweated over were gone, lost in seconds. The process of bringing the fish in started again. If the first part of catching a tuna is characterised by raw speed, the second part is about endurance, and both bring a delightfully outlandish dimension to fly fishing.

At some point the majority of the fly line was back on the reel and the tuna was circling below the boat, making occasional dives. A stalemate set in. Like trout, an ability to play a tuna is needed, but again it feels like a different game. As it went one way, Graeme instructed me to put side strain to the other. The tuna darted left, I strained right. The tuna pushed to the right, I heave left. Then twang. The dreaded limp line. “Oh no! What’s happened?” That feeling, that I had felt before, but not the cause. “Shark?”

Of the three occasions I managed to hook a tuna on that trip, two ended like this. One might have been a shark or a 25lb leader snapping under the strain. The other I pulled the hook from the tuna’s mouth. The only tuna I boated was a small bullet of a fish, who was welcomed warmly nonetheless. But I didn’t need to boat a big one. Unlike most tuna I cast at, I was hooked. 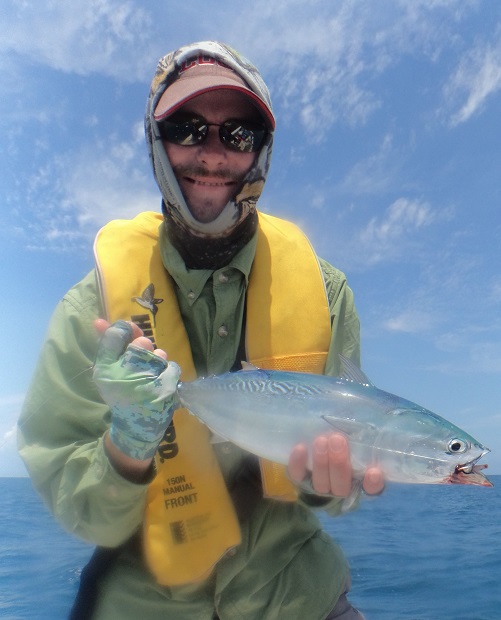 Which brings me to a final thought: comparing fly fishing for trout and tuna makes sense only until you do it. They are as similar in some ways as they are different in others. So I don’t think I will ever complete Brad’s challenge; there is no choosing one over the other. Thanks to Brad and Graeme, my problem is that I now have to find ways to do both.

John MacRose is an amateur but enthusiastic fly fisher, keen to (try and) catch any fish on the fly. He is also a member of Brisbane Fly Fishing Club (http://www.bffc.org.au/)