During the prolonged winter layoff from fishing our thoughts often drift to warmer places and rivers we yearn to visit once more. Duncan Raynor takes us to one such place.

Having written a few articles for Eat, Sleep, Fish before I thought I would have another crack. I am using it as therapy for my cabin fever. It is about two weeks till the season starts down here in Cornwall and with the crazy weather we have had it means I have not wet a line since December. I have walked around my house in waders and thrashed the field to a froth practicing may casting, I may have lost it! 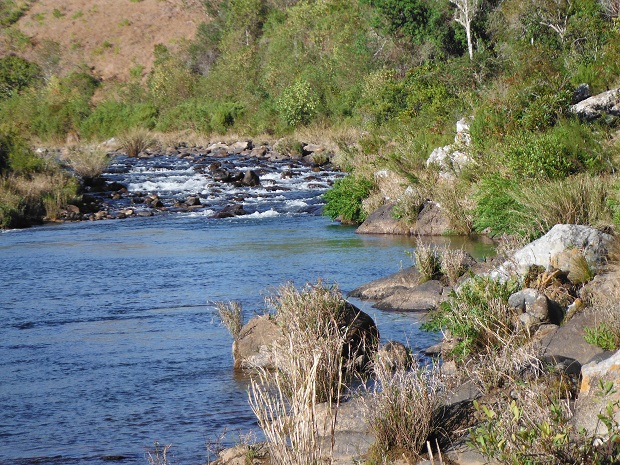 That being said, the following is a brief report of a weekend trip to the eastern highlands of Zimbabwe.

I grew up in Zimbabwe, went to school there and spent many school holidays up in the mountains. My mother used to pack the four (my siblings and I) of us into the station wagon and off we would go, it was about a three hour drive up to the mountains. I can remember every bend of that road, each one meaning we were a little bit closer. 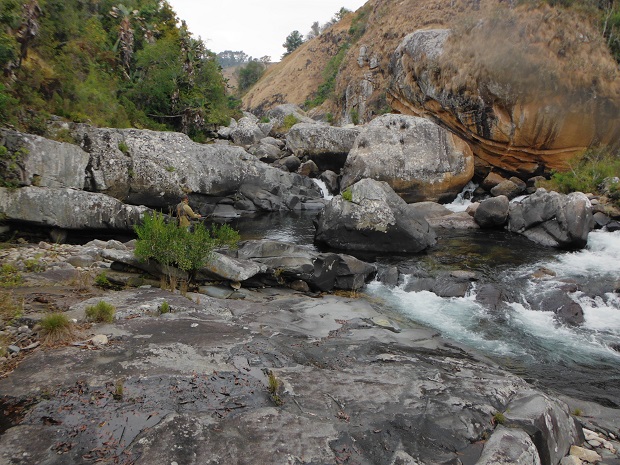 Driving up there this time was such a trip down memory lane. We used to stay in the national parks houses around three of the main dams that were built when Zimbabwe was Rhodesa (My mum was taken to stay in them as a child). I fished all of them, (Rhodes, Mare and Udu, as well as Gulliver and Purdon) and all the little streams that ran off all of the hills.There are a few bigger rivers too.

A favorite river is the Pungwe river, it starts on the slopes of mount Nyangani (Zimbabwe's highest peak) and flows east towards Mozambique, the other big river is called the Gairesi. The Pungwe I fished lots as it was covered by the licence you had to buy to fish all of the dams that the national parks stocked. Not big fish but great to teach a young lad how to stalk trout and stay hidden, also how to retie leaders and fetch flies from trees and undergrowth, it is a very wild river, with lots of hardy growth on its banks, the little trout also tasted fantastic.

The Gairesi river was always a dream, It is managed buy a club (Nyanga Downs Fly Fishing Club) which works closely with the local indigenous people to look after the fishing. The project is run on what is called a campfire system, I will try to explain it. In the wilder areas of Southern Africa the wild life and game, as well as other resources have a value, in that tourists will pay to come and see the game and stay in some of these places. To ensure the local people do not allow poaching and exploitation of these resources, groups set up agreements where in return for land to build lodges and access to the wild areas, payments and support are given to the local people. 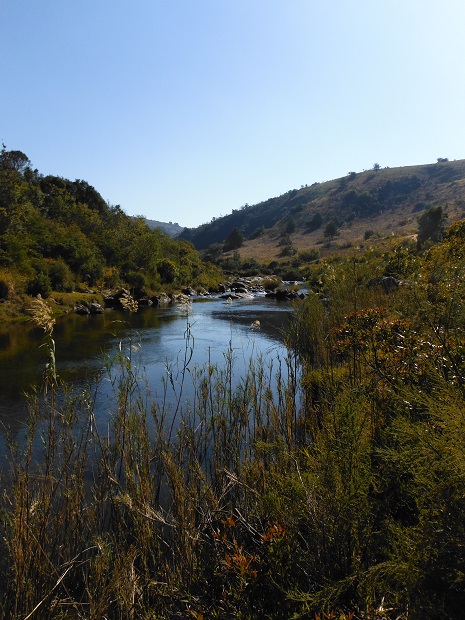 In this case, the club, lets the river and hires the local community to help manage the river, they help with the stocking of fish, trimming of the paths, catch and control the eel population, collect firewood and clean the two cottages. The club helps employ local people and provides transport to help them, it has built a school and helps with paying for the teachers in the school. The river flows of the other side of Mount Nyangani to the Pungwe and is very very remote. The dust road that gets you in ends up in Mozambique, I think.

The road to it winds down and down, it takes about an hour to drive to it from the main road. It is an old logging road, which because of the very fine soil gets very rutted in the wet season. To say it is a bumpy ride is putting it mildly. It's worth it though.

This was a sort of a family trip, my parents, my brother, his girlfriend and my fiance. My mum has recently got very keen and fishes, my dad tries as does my brother. (Both prefer Tiger fishing, drifting down the Zambezi river with a cold beer in hand. Can't think why!) Think more stock whip/shambok than elegant casting.The riverside vegetation took a pounding as did my fly boxes. 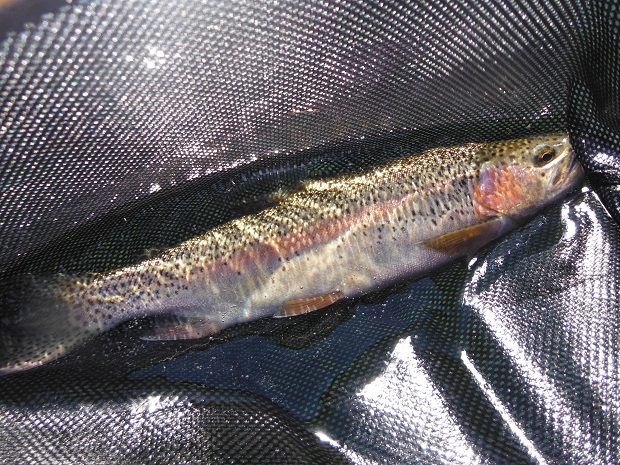 It worked well, the family fished a bit then sat in the sun and picnicked, read their books and chatted. I could disappear and wander my way up stream and down to my heart's content.
It was September when we made this trip which is at the end of winter, it is warming up but normally a few weeks before the first rains. The river was fairly low and incredibly clear.

Winter in Zimbabwe is not like winter in the UK as Zimbabwe sits just below the tropic of Capricorn, cool and dry probably describes it best. The grasses are dry and the place looks very windswept and harsh, the red trees in some of the photos are called Masasa trees (brachistegia speciforma sp) they bust into new leaf in September in preparation for the rains, they start a bright red and turn a coppery colour and then bright green, it is beautiful, the trees at the higher altitude are slightly stunted, walking through a grove of them is something else, a sea of red and coppers. 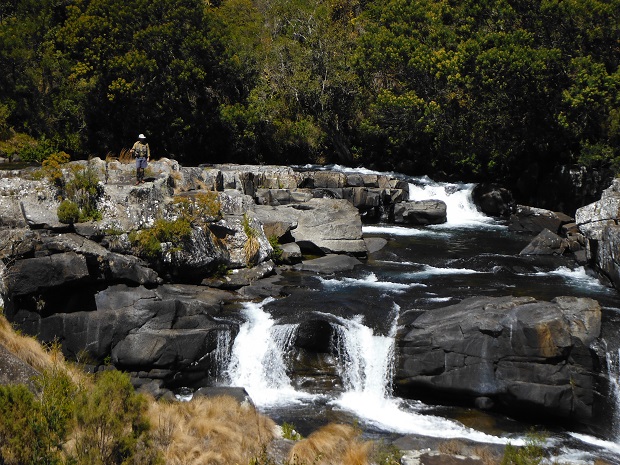 The fishing was as good as I expected, if not better, with a mixture of grown on stocked fish and some of the wild fish. There were no native wild trout in Zimbabwe, they are an introduced species. There is massive predation of immature trout in the rivers of Zimbabwe by eels, African mottled eels, they eat fry and parr and some of the fish you catch have scars from eel bites. The populations of eels are monitored and controlled. In the very dry years they can be a real menace, decimating trout stocks.

The Gairesi does have a population of wild rainbow trout, probably survivors from some of the very early stockings of the river. They may have escaped predation by living in the two main tributaries. They are magnificent, fight like savages and are very, very hard to catch. The clear water makes spotting them from the high banks possible, sort of like in New Zealand.

I would get on some high ground, spot fish and work my way down to the pools to try them. I mainly upstream nymph fished, the entomology of the rivers in the eastern highlands has not been explored greatly. I can tell you that the trout eat fresh water crabs, a small dark catfish, dragonfly nymphs (these are massive), and any terrestrials that fall onto the water, grasshoppers and flying ants mainly. 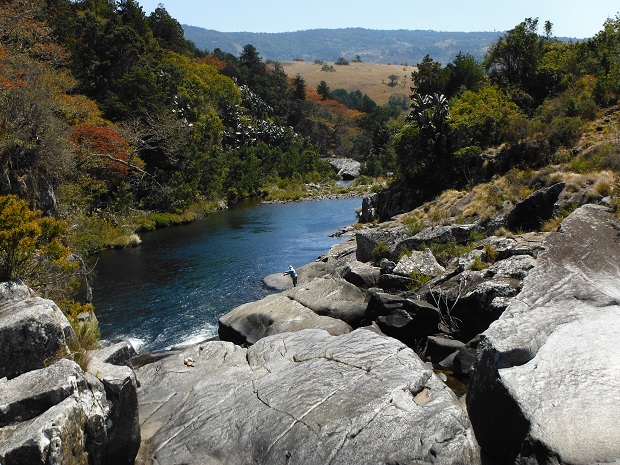 I tied up big dark nymphs for the trip, long shanked size 10 hooks with 3mm tungsten beads. Basically big pheasant tail nymphs in olive and black. The Zak nymph is a personal favorite. For drys again quite big stimulators and dry flying ant patterns were all that they were after. I am sure the trout are forced to be very opportunistic and take what comes as long as your presentation is spot on and they don't see you coming. Some quite testing fishing.

The bigger, grown on fish probably get to three or so pounds as an average, much bigger ones are caught every season with trout over five pounds caught periodically. The wild fish get to about a pound in weight. I still have nightmares about one that got away in a deep corner pool below a cliff topped by burning red Masasa trees It was a slow sliding away of the fly line and a  powerful thump of a take and thrum as the line caught the current, a mighty surge and it was gone. You get the picture. 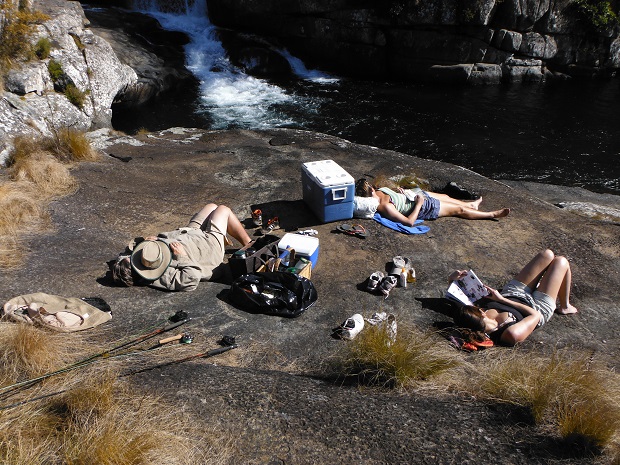 In terms of gear, I normally wet wade, so a pair of board shorts and good walking trainers with gators on the bottom half, and a long sleeved shirt and fly waist coat on top, broad brimmed hats are a must and the Polaroids too. Sunburn at the higher altitudes can be horrendous, the long sleeves save your arms and the big hat your face.

I used a 9 ft 5 weight Guideline LeCie rod with a floating line, a decently tapered leader helps turn the big flies over. I think if one is seriously trying to catch the bigger fish a sink tip or streamer tip line may be the ticket, with some weighted sculpin or streamer pattern I am sure some of the big fish could be tempted.

The river is hard to describe, it flows over granite mostly with some sandstone thrown in. There are massive boulders in some of the sections, steep sided shady gorges in others. There are some pools where the water is so clear that you can see the bottom (and trout) at 20 foot. There are stony runs with pocket water and corner pools, Riffley sections and some very tricky sections with islands and big rocks in the middle of the river. 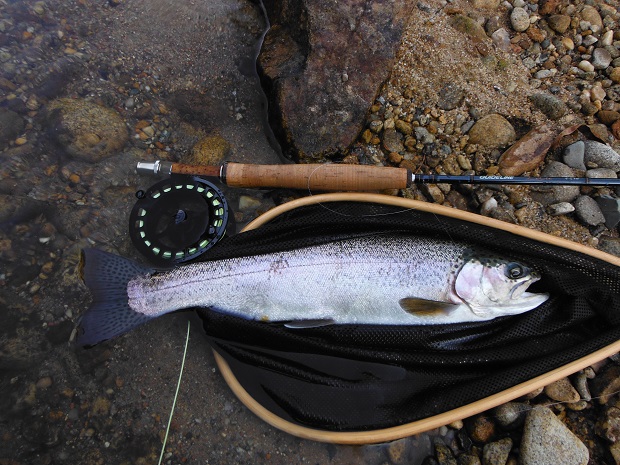 There is about 20 km of river, enough to keep me fully immersed for three days solid. There is more but the going is very very tough, the extremely remote nature of some of these places makes it worth being a bit careful about where you wander. If you break an ankle, there is no Helimed 999 to come and get you. Zimbabwe is a third world country and such luxuries simply do not exist.

It is a magical place, there are local subsistence farms on the slopes of the hills above the river basin, the gentle tinkling of the cow bells can sometimes be heard if the wind is right. I have never seen a soul on the river other than people I have been with. I hope some of my photos do it justice. I, like most of the other readers of Eat, Sleep, Fish, yearn to be in places like the Gairesi river. Unspoilt, clean, wild, beautiful and full of trout.