Luke Bannister is based across the border in North Cornwall where he builds a range of beautifully crafted fine cane rods, from small stream trout wands to double-handed salmon rods. James Beeson spends some time with Luke.

The road seems to get narrower as it snakes away from the edge of Bude and towards the sea. It’s a typical English country lane, with high earth banks and hedgerows, the kind of stuff that gave the Allies so much trouble when they tried to break out from the beaches after D-day. There are no hidden Panzers here, only chaffinches who have come out to see who is invading their patch. Jackson Browne is on the radio, singing Take It Easy. Somewhere soon the road will end. The sand and blue water of the Atlantic coast is visible in the distance. In the words of the song, it seems like a good place to make a stand. The road becomes a dirt track and disappears into a field, beside it I find Luke Bannister’s workshop.

I had never met Luke before, though I had seen his excellent fishing videos. He struck me as a very patient and thoughtful angler, the traditional fishing jacket and hat complementing the image. From the outside you can’t tell much about the workshop, it looks entirely normal, but inside it is Aladdin’s Cave, only more exciting. Instead of gold, silver, and jewels there are fishing rods, reels, and wooden handled tools. 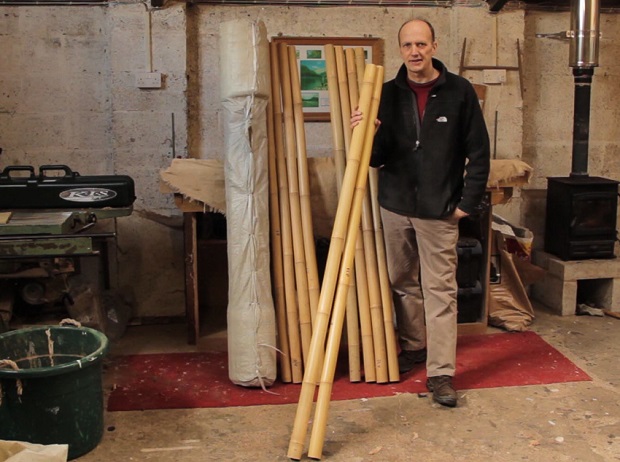 The room is lined by a ring of workbenches, broken here and there by lathes and an intricate set of adjustable planing forms that look impressive. The centre space is dominated by two long benches side-by-side and lying across them is the work in progress top section of a bamboo rod. Its tapered strips have been bound together for the glue to dry. Whole culms of bamboo hang from the ceiling and several split pieces are stacked in the back. A small wood burning stove provides both heat and additional charm, a pair of hip waders hang from a nail by the door.

‘Would you like a cup of tea?’ says Luke, he produces a kettle and a pair of china mugs.

It seems like a good time to bring out my secret weapon. I know Luke is a fan of the great Michigan fishing writer Robert Traver, I mention another Michigan writer I think he might like and pull out one of his books. I talk about my pilgrimage to the Fox River and we agree that Brook Trout are beautiful, like something from a dream. 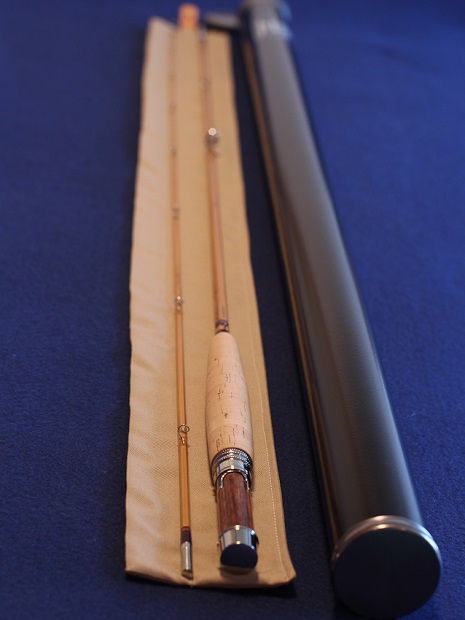 ‘Shall we go and have a cast?’ Luke says, once the tea is gone.

I’ve got a couple of cane rods in the car, I brought them to show I’m not a total impostor. We string up and talk about the wallowing action of the Sharpes nine-footer, one from my collection.

‘Something happens to cane with rods over about 8 ½ foot,’ says Luke. ‘They don’t have quite the same action as a shorter rod. Once you get to around 9’ in length it does tend to go a bit soft and become too supple for modern lines and methods. The really interesting thing is that around 12’ it comes back again. I built a 12’ double handed salmon rod on commission. The owner caught a fish with his first cast in the first pool he fished with it – I’ve got the picture somewhere. That rod had a lovely action, it was so good that I had to build one for myself.’

I watch him throw a perfect loop in the space between the workshop and a pickup truck. I regret not having practised. He picks out a Superfast and a traditional Garrison to compare. My first loop is not perfect, and it takes me a little while to adjust to the different material. The taper of the Superfast is designed to be closer to that of a modern fly rod, a good starting point for someone who does most of their work in carbon. It should suit me more than the Garrison, but I find the opposite is true. With the more traditional taper I feel a stronger sense of being in tune, that the rod and I are working together, plus my casts are better.

Fly fishing is one of those places where the two rivers of art and science meet. The presence of biology and entomology is obvious, but these are not the only sciences at work. Rod building is a matter of maths and physics, equations are behind the compound tapers which provide the necessary transfer of energy that makes casting possible. 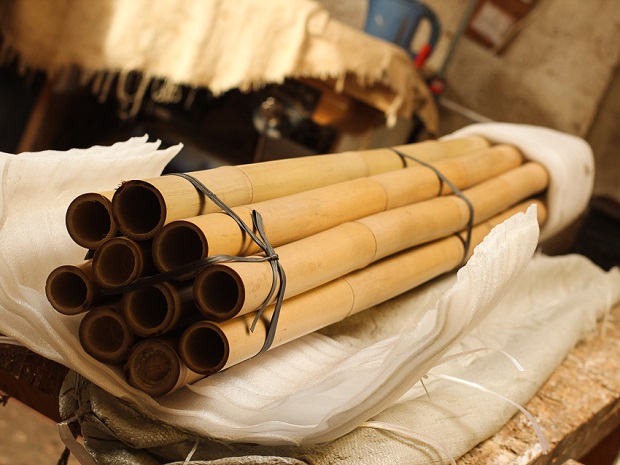 What a bamboo rod can do is soften that energy transfer and land the fly gently, with less force and more timing. Each rod has to be in balance with itself and that takes one pair of hands working on it throughout, understanding where the strengths and weaknesses of the cane lie, understanding how the taper must adjust to the number of ferrules, understanding the desired action and line weight.

Back in the workshop I ask about planes. There seems to be, at least in the books I’ve read, a great emphasis based on the Stanley 9 ½ block plane. As though it were purpose-built for rod makers.

Along with the Stanley plane, every rod builder I’ve come across uses a set of adjustable planing forms, sometimes with a set of rough forms as well. If you have the machine tools and the space it makes good sense to build your own forms, the alternative is to buy them ready made but they’re not cheap. For someone looking to test the water, with an interest that is amateur rather than professional, it seems like a risk. ‘Presumably there’s no other choice?’ I ask.

‘Not necessarily, the adjustable form is relatively new in rod building terms.’ Luke goes into the back room for a moment and comes out with some pieces of wood.

‘This one is self-explanatory,’ he says, putting a long plank with a tapered groove on top of the nearest workbench. It works like a jelly mould, the taper being carved into the wood allowing the cane strips to be planed into shape. The top section is on one side and the bottom section on the other. ‘Obviously the disadvantage is that you can only ever make one type of rod with one taper, but it’s much cheaper as a starting point than buying or building an adjustable form.’

The next object is more mysterious. 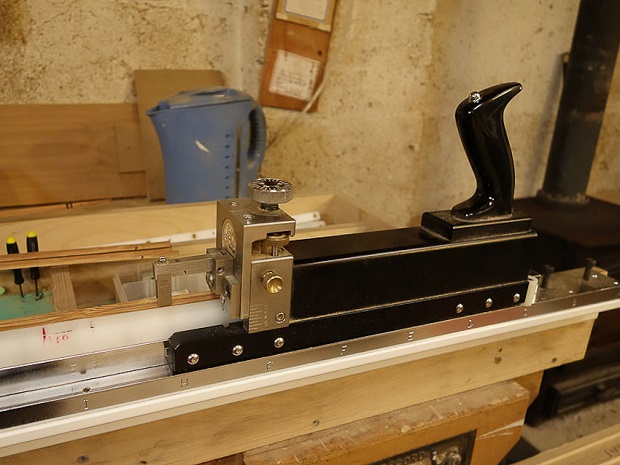 ‘I found this at an antique tackle fair, there aren’t many people who know what it is or how to use it.’ It is a long triangular shaped piece of wood with the point of the triangle cut off at a slant. ‘This is how they used to make cane rods a long time ago. After the cane is split you glue it to the flat surface at the point of the triangle, then by planing both sides you create the taper. The difficult bit is separating the planed strips from the form afterwards but if you built a rod in this way you would be one of few people left in the world to have done so.’

Luke is generous with his knowledge, and even offers to show me the techniques involved in splitting and shaping the cane.

‘Aren’t you worried about giving away all your secrets?’ I ask.

‘There aren’t any secrets, not really. The way I see it, the more people who are interested in cane rods the better. Besides, I know how long it takes to learn the skills needed to build one.’ 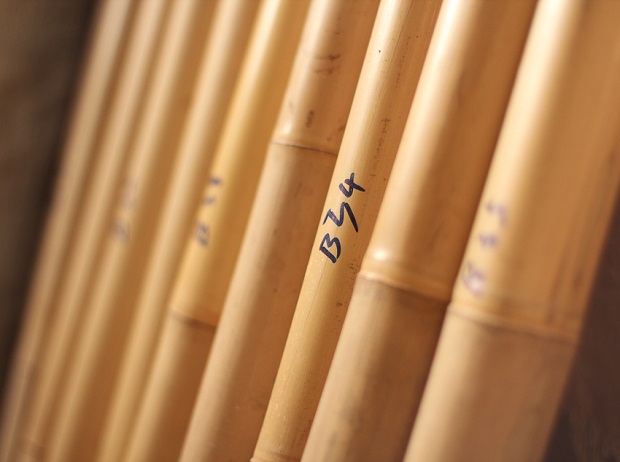 There is an obvious passion and love for cane rods and rod building, something which is shared among most bamboo fly rod enthusiasts. The ‘art’ element is often invoked, putting the rod builder in some interesting company - among actors, painters, even writers. Luke has a more practical view.

‘I don’t like it when people talk about rod building as art. To me, art is something that values form over function.’ The Oxford English Dictionary defines art as 'producing works to be appreciated primarily for their beauty or emotional power.' While a bamboo rod can be emotional - especially if you stand on it surrounded by rising fish - that's not really the point. ‘I wouldn’t want to make a rod that looked good but didn’t cast or fish well, there would be no point.‘

I am surprised, when I get back in my car, to find that it is already late in the afternoon. Time spent fishing, talking about fishing, dreaming of fishing, can’t be measured in the regular way - it belongs to something else. I had always thought there was something special about fishing with a split cane rod, now I have a better understanding of the making of them I find that sense increased. As a natural material it provides a link between us and the wild places we fish, patient hours are spent in shaping that material and giving it a purpose. A bamboo fly rod works to bridge the distance between us and the trout, and isn’t that part of the reason we go fishing after all?

‘I fish because I love to; because I love the environs where trout are found, which are invariably beautiful and I hate the environs where crowds of people are found, which are invariably ugly; because of all the television commercials, cocktail parties, and assorted social posturing I thus escape; because, in a world where most men seem to spend their lives doing things they hate, my fishing is at once an endless source of delight and an act of small rebellion; because trout do not lie or cheat and cannot be bought or bribed or impressed by power, but respond only to quietude and humility and endless patience; because I suspect that men are going along this way for the last time, and I for one don't want to waste the trip; because only in the woods can I find solitude without loneliness; because bourbon out of an old tin cup always tastes better out there; because maybe one day I will catch a mermaid; and, finally, not because I regard fishing as being so terribly important but because I suspect that so many of the other concerns of men are equally unimportant - and not nearly so much fun...’