Nick Thomas looks at both a carp fishery and a fly he has developed - an imitative fly for the fishery should you decide to head down there yourself. Read on.

In the past few years I've developed something of an addiction to pursuing carp with a fly rod. I've always found using a dry fly to be the most challenging and exciting method for catching trout, so I guess that with the visual takes and tackle testing runs you get with a decent sized carp it was inevitable that many summer days find me on the banks of coarse fisheries rather than on trout lakes or rivers.

If you've never tried it don't let anyone try to tell you that catching carp on a fly is easy or dull. Sure on some days, just like trout, carp may take virtually anything you wish to chuck at them, but most of the time you'll have to exercise a certain amount of grey matter and good reflexes to get consistent results. Certainly judging the right moment to strike is much harder for a carp taking a fly off the surface than for a trout. Missing a couple of trout might happen now and then; missing ten carp before hooking one is a pretty normal occurrence. 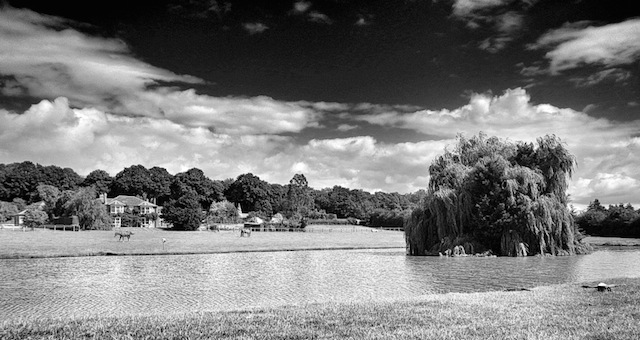 To feed my addiction I've spent quite a bit of time this summer searching out some new fisheries in Wales and England. Some places I won't be returning to, and others I'm sure will give me some great fishing in the future. Pridewood Hops is one of the latter. If I were to list my key criteria for a great place to fly fish for carp then this small lake on a Herefordshire hop farm just off the A4172 west of Ledbury (HR8 2SF on sat nav) would tick a lot of boxes. Pridewood is more of a large farm pond than commercial fishery with a good stock of well-conditioned carp of high average size. The shallow spring-fed lake has flat open banks which are ideal for fly casting and all areas of water including the margins around the larger island are accessible to an average caster.

The carp are happy to take proper flies too; now don't get me wrong, I'm happy enough to take carp off the surface on biscuit imitations and at some commercial fisheries that's all that really works, but catching on beetles, bugs and other imitations is much more satisfying. 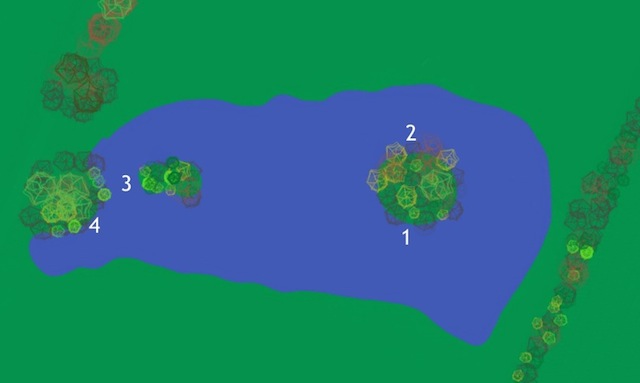 Fish can be caught on the fly anywhere on the lake but there a number of places which hold the larger fish and are well worth targeting on a circuit of the water. The obvious place to start is around the larger of the two islands which isn't actually as big as it looks as weeping willows overhang the water for some distance all round. There are some gaps in amongst the hanging branches which allow an accurate cast to place a fly close to the undercut banks of the island where the big fish lurk (1 & 2 on the map). Isolated carp do patrol the open water around the island but the majority of the fish stay close in under the shaded protection of the willows where they are more competitive in feeding and more likely to take a fly. 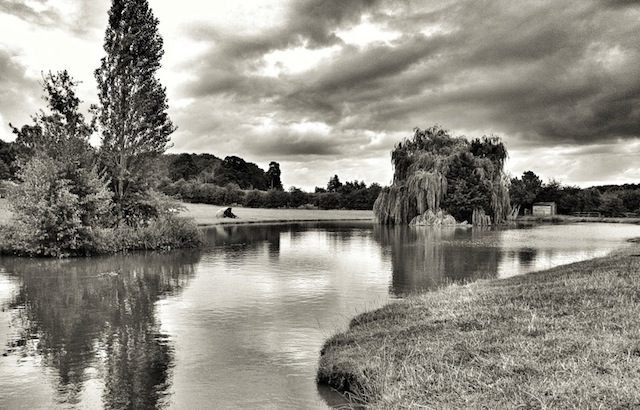 The gap between the small island and the overhanging bushes at the other end of the lake is a good spot to target fish at short range (3 on map). Make sure you use a strong leader if you fish here as the fish know where all the snags are and will instantly try and run under the bushes or behind the island. On one visit I hooked a 13lb common here which ran off all of my fly line against a tight drag on my Evotech with the line scything through the water in a curve of spray as the fish sprinted round the back of the island. A stumbling run along the bank coupled with some desperate winding recovered some line and applying size strain with my 7wt doubled over and the line singing in the breeze turned the fish back into more open water. The fish then made some further long runs out into the lake before I managed to get it within netting range. 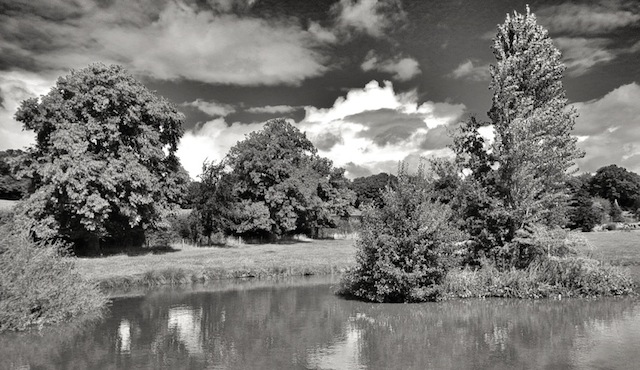 For some very close quarter combat the narrow channel at the end of the lake allows fishing almost under your rod tip (4 on map). The first time I fished at Pridewood a gusty breeze had built up towards the end of the day making fishing difficult and I had moved down to this spot in search of some sheltered water. Among the branches overhanging the water were a group of large brown hawker dragonflies taking shelter from the wind. Now and then as a gust of wind blew through shaking the branches some of the dragonflies would be flicked off onto the water below and struggle to take off again. If they didn't make it off the surface quickly they would disappear in a slurp and a swirl as the carp looped out from under the bushes and back under cover.

The only fly I had in my box at the time that bore any resemblance to the dragonflies was a brown foam beetle tied on a long-shank carp hook. I tied that onto my leader and roll cast it out to the edge of the bushes. It didn't stay there long, a big orange mouth emerged from under the shrubbery and snaffled it. A serious tug of war ensued ending with somewhat aggrieved 8lb carp in the landing net. The second cast with the same fly did not go so well; the fly landed perfectly right next to the bushes and that was the last I saw of it. The carp that took it snapped the tippet and was gone back to its lair before I knew what was happening. It was time to pack up and go home, but I was already thinking about how I could make a good dragonfly imitation for my next visit. 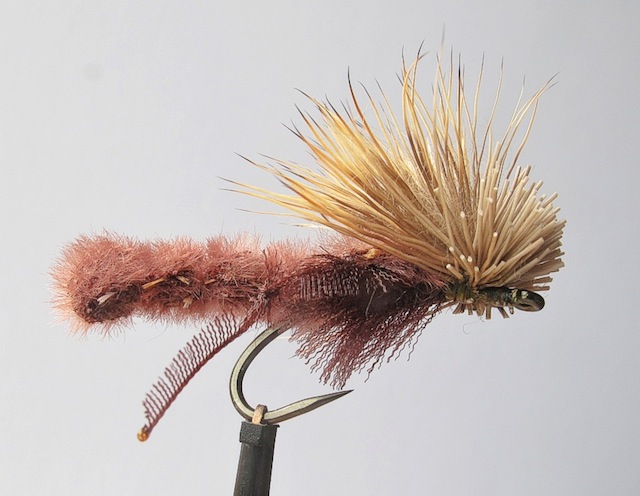 This was the result of experimenting with a few design variants. It's caught a good few carp for me at Pridewood and elsewhere and I'm sure it will do well in smaller sizes for trout. The furry foam body gives a more realistic imitation than smooth closed cell foam and being more flexible it folds out of the way when a fish takes allowing a more secure hook hold, something that can be a problem with standard stiffer extended foam bodies. A light coat of Gink on the wing and head is all that's needed to keep it afloat in any conditions with the extended body hanging in the surface film. This is a large fly so don't pussyfoot about with fine tippets which will twist and kink with constant casting, 10lb fluorocarbon is just right for a size 8 Furry Dragon.