The Italian Casting style as taught by Massimo Magliocco (one of Italy’s top fly fishermen and casters) differs radically from the typical casting styles seen in the UK. Whilst learning the basic cast (Lancio in Angolazione – Angular cast -equivalent of our overhead cast) it took me five days to break the muscle memory that I had developed over many years of fly fishing, but it was worth all the effort.

So how and why is this style so different from ‘normal’ casting?

As mentioned in my earlier article it evolved to fish dry flies, drag-free on fast flowing and tree-lined mountain streams with complex currents. The key elements of most of the casts (including the Angular Cast) are: 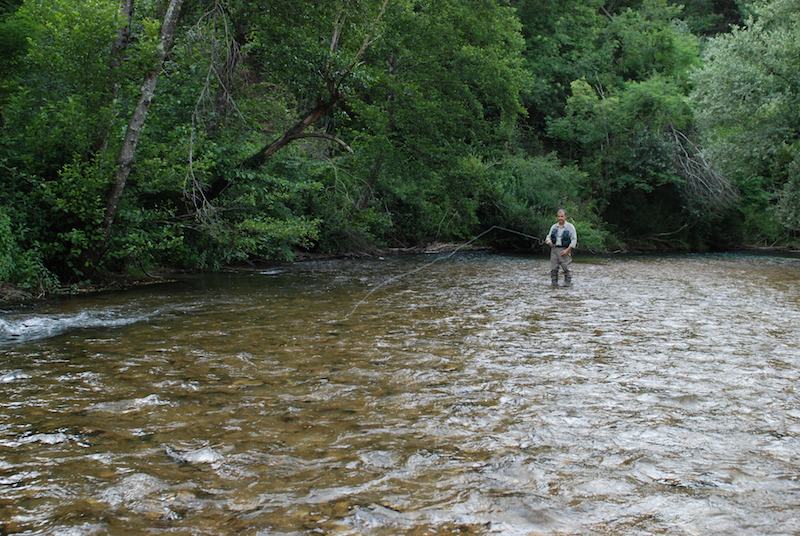 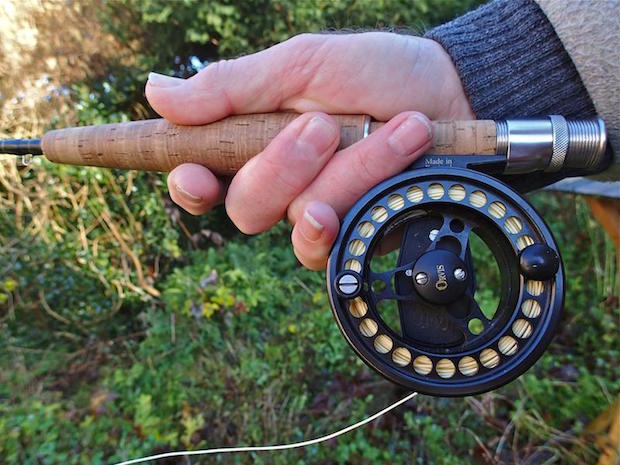 So let’s look at the Angular Cast, the ‘bread and butter’ cast of this style.

Learn this cast correctly and other specific casts become much easier. 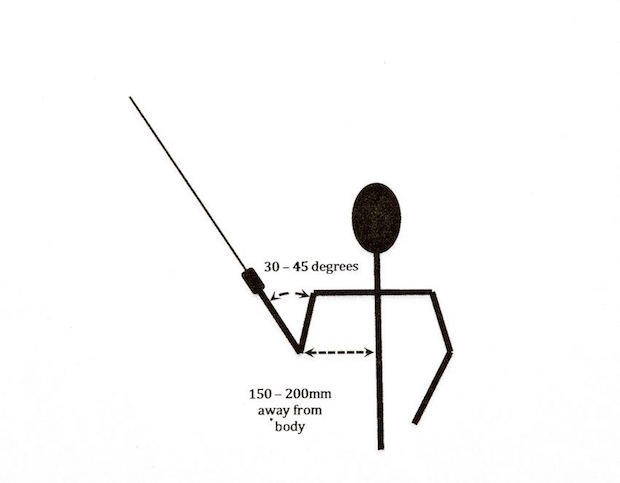 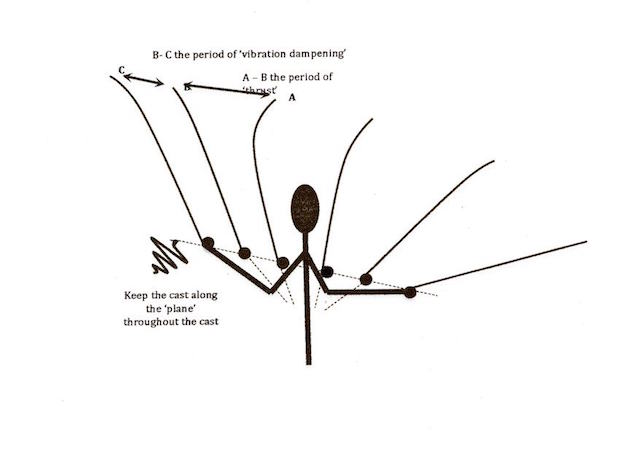 Make sure you have kept within the ‘axis’. 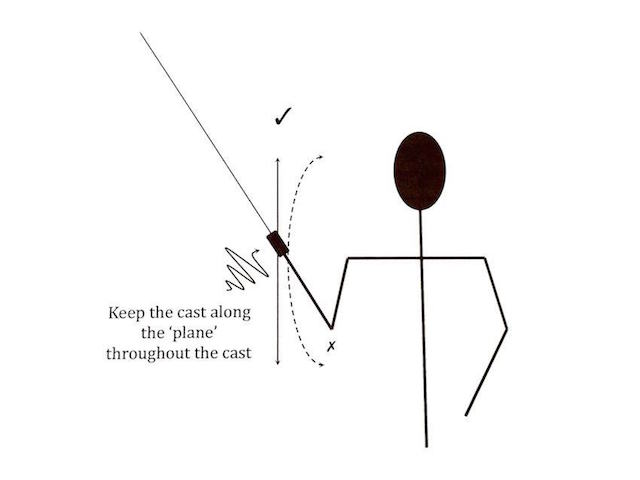 As the line straightens out, release one of the loops held in your non-casting hand and at the completion of the ‘vibration dampening’ component immediately commence the second back cast.

Note particularly that the hand moves in a straight line with no deviation to the side. This precise tracking of the rod is essential if line speed is to be optimized and if tight loops are to be achieved.

“Among all the components that affect casting, the “thrust” is perhaps the most important one” – Massimo Magliocco

It is the thrust that creates energy, direction and precision. The “thrust” can be defined as “the precise instant during which the rod transmits a sudden increase in velocity to the line in a very defined space. The line goes forward over the rod tip and the loop is formed”.

In any case there are two “thrusts – a forward one and a backward one respectively in each of the forward and back casts. 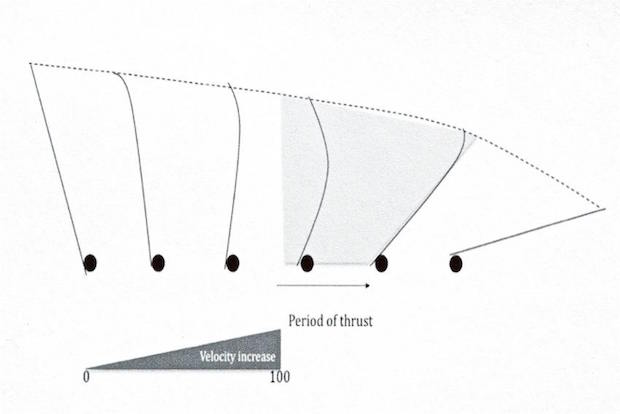 Before the “thrust” the line speed must increase constantly and progressively. As a practical example let’s consider the rod that at the beginning has a velocity equal to zero. This velocity must increase gradually to say 100 until a fraction of a second before the thrust. Increasing gradually in tens that is from 10 then 20 etc. until 100.

At this point the line must pass over the rod tip and in this precise moment the line speed must increase suddenly and in a very short space. In this way, the rod tip, which until now was just dragging the line, will create a sudden snap and an increase in velocity thus creating the loop in front of the rod tip.

The size of the loop is determined by how far the rod tip deviates from a straight line during the “thrust” phase. 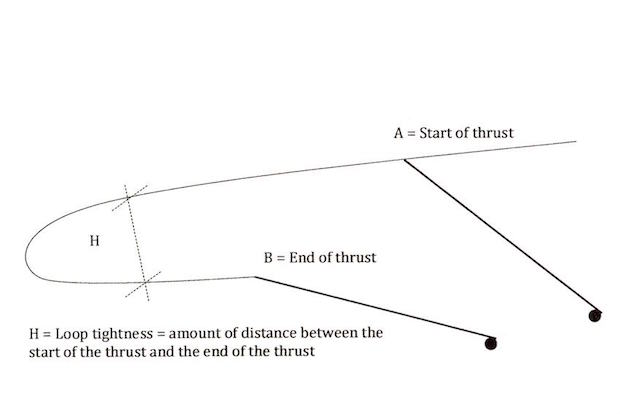 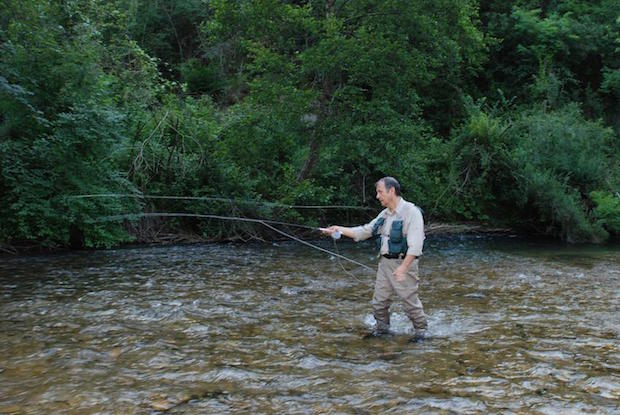 Casting, especially in the Italian style, is harmonious and should become spontaneous without forcing the rod, line or leader too much. Using too much force is negative and to get the cast working well for you there should not be any intended stops during the forward or back cast.

A ‘stop’ generates an abrupt movement causing the line speed to reduce. When you start the next cast (forward or backward) the space for acceleration is decreased and consequently you need to start from zero velocity.

This is where the Italian style has introduced a further and fundamental component into the cast. This further component is termed ‘vibration dampening’ and is an essential element of the casting stroke being deeply connected to the formation of the loop and use of extra casting space.

‘Vibration dampening is used to:

It is this component of the cast that makes the Italian style distinctly different to the more traditional styles. 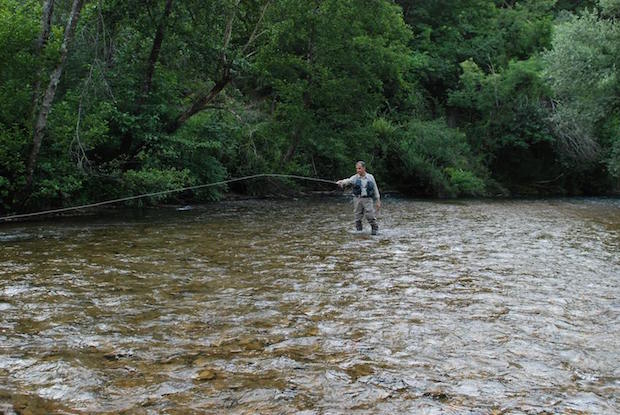 Further information about this casting style can be obtained via the following sources:

Massimo Magliocco plus a couple of Italian instructors and members of the FFM UK Team will be at the BFFI Fly Fair on the 7th and 8th of February 2015 where we will be doing demonstrations and giving free casting lessons.