James Beeson springs a surprise on ESF's Pete Tyjas and takes him up into Dartmoor close to the source of his home water, the Taw.

I wait for Pete in Belstone Car Park, fifteen minutes ahead of time. One of the first things you learn about Pete is that he likes to be early. Belstone lies in the shadow of Belstone Tor, which separates the East Okement from the early stages of the River Taw. It is a village of traditional stone cottages and narrow lanes. Wild ponies trim the verges and hope for an unattended garden with an open gate while sheep and cattle graze the common. The Taw tumbles through a tree-lined gorge below the garden of the village pub, dog walkers use well-worn paths on both banks. There are trout in the pools, but they are hard to reach.

Dartmoor gives birth to lots of streams and rivers, some of them go on to become famous names, like the Taw, while others are hardly worth naming at all. But they all have their roots in Dartmoor. High up in these fluvial valleys there are granite boulders the size of cars that it would take a glacier to move. Where the bedrock sheers away there are falls of white water that drop into deep plunge pools, and there are runs and gullies carved into the foundations of the landscape. This is Tenkara Country.

It is a warm afternoon in the last week of September when his car pulls in and he jumps out, waders already on. 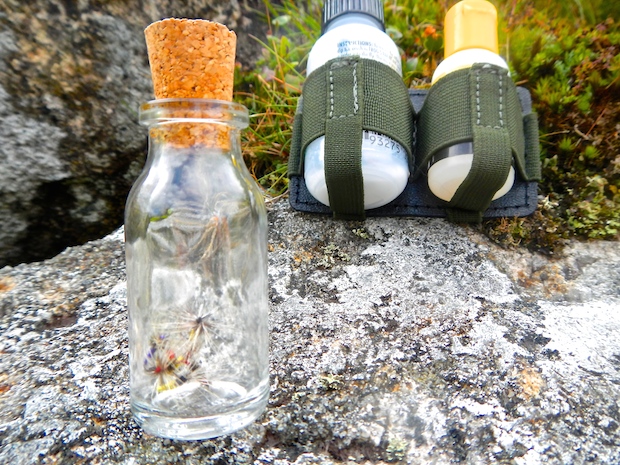 ‘What do I need?’ he says, opening the boot of his car to reveal enough rods and gear to start his own tackle shop.

‘Nothing,’ I say, I have it all in hand. A rod, a fixed length of line, one spool of tippet, and a small glass bottle of home-made reverse hackle flies. The bottle used to hold a single serving of caramel sauce from a pudding eaten long ago. The flies I tied myself in a fudge of the kebari style. The trout here are spread out and a mobile approach is what I have in mind.

Pete’s river is the Taw. It has played a major role in his story, and that is why we are here. Well, that’s part of the reason. I also wanted to give something back to someone who regularly goes out of his way to help others, and I thought you might like to know a little more about the man behind the magazine.

I once heard someone describe Mike Weaver as ‘something like the trout fisherman’s Yoda’. If there’s truth in that then Pete is something like our Obi Wan, and the two are connected by more than that. Once upon a time in London, Pete read Mike’s book In Pursuit of Wild Trout. There is fishing to be had in London, but much of it is stocked stillwater. There is nothing like the wild trout of the Westcountry rivers in the depictions and descriptions of Mike’s book. It was this that drove Pete down the M4, where he began with the Crediton Fly Fishing Club and their stretch at Taw Bridge. A number of big, wild browns later and it was only a short step to moving west permanently.

Pete quickly found work as a guide. He has an effortless, natural ability with a fly rod that I like to think is the result of a lot of hard work. Before I met him I had never seen someone cast an entire fly line. It’s not his casting that makes him a good guide though, and nor is it his skill at catching fish. I think what really makes the difference is his confidence and the way he manages to transmit that to those within his radius. People fish better by his presence, his optimism is limitless and he refuses to accept failure. Pete has a fish-catching aura, something that exists outside the physical effort of fishing. I know, I’ve seen it happen, man. 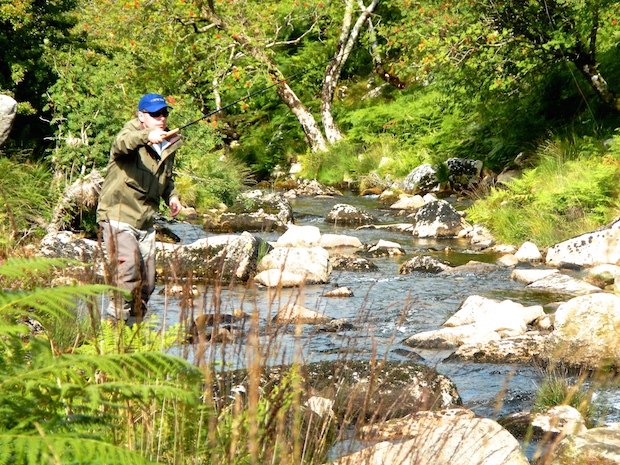 A few years after moving west Pete found himself driving past the Fox and Hounds Country House Hotel in Chulmleigh. The once famous fishing hotel had lost most of its beats and had just been taken over by new owners looking to turn the business around. Over the last six years Pete has helped put the hotel back on the fishing map.

Several years after all that I made my own journey west, having grown tired of the same London lakes. I wanted to be a Trout Bum. Work less, fish more. With hindsight Tenkara seems a natural method for a bum - less money on gear, more money for beer. The rod I’ve been using to get into the method is Pete’s and I’ve caught trout with it from the pots and runs we stand beside. I rig up for him and offer him the choice of one of my home-made flies. He chooses one with a peacock herl body, grizzle hackle, and red tag.

It doesn’t take him long to connect with a fish. These moorland trout in clear water streams come fast at the fly. Sometimes they miss, no strike is used just a gentle lift of the rod. The fish is either on or it’s not. It’s all very philosophical this Tenkara business.

Pete runs the fly through a long pool, giving it a little wake over the flat tail. A small trout has a go but isn’t hooked. Sometimes they come again. He drifts the fly through the rougher water at the head of the pool. A boulder forces the current through a narrow channel.  A second trout sucks the fly down with a swirl. This one stays on and comes to hand for a quick release. These Upper Taw trout are strikingly colourful, a sharp contrast to the dark-backed, almost black trout of the Okement in the neighbouring valley. 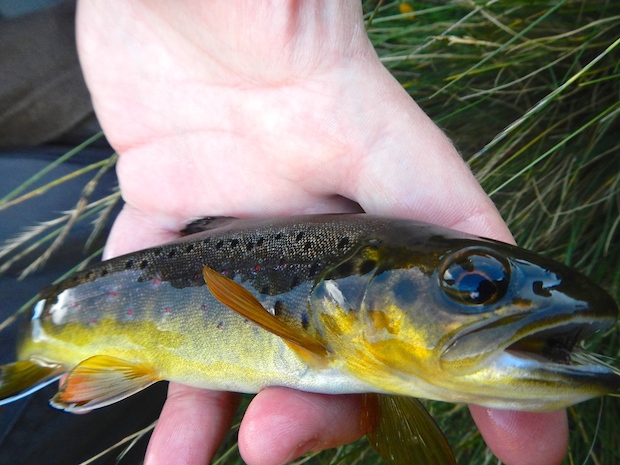 ‘You should have a go,’ says Pete. I try to refuse.

‘You taught me that guides don’t fish,’ I say.

Another thing I’ve learned about Pete is that he likes to see others catching. There is no sense in fighting it. I run the fly through some likely looking places, a couple of trout make slashing attacks but either they miss or I do, spitting the fly before I can lift the rod. I hand it back. Today is not my day.

‘There’s some water upstream I want you to see,’ I say.

Above the gorge the ground flattens into a wide plain, the line of hills and tors creates a bowl shape of steep escarpments that has something of the Old West about it. There are no buffalo or cowboys, just some shaggy cattle and a few hikers in brightly coloured rain jackets. On the other side of Steeperton Tor, at the far end of the bowl where the river cuts through the gap in the hills, is Taw Head. On the other side of the granite ridge south of Taw Head is the beginning of the East Dart. These Dartmoor rivers have deep, connected roots and branches that Dartmoor fishermen become tangled in. 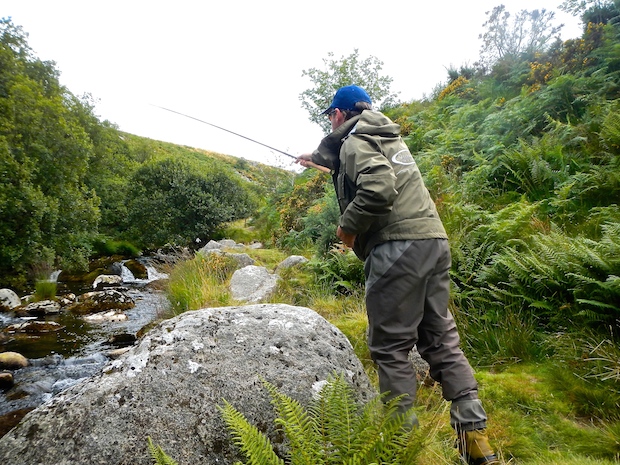 Pete catches a couple more as we work our way up to a natural weir.

‘I’d love to guide this kind of fishing a little more, but there isn’t a  massive demand for it, yet’ he says.

I suppose for many it’s about size and numbers of fish, but the biggest trout aren’t necessarily the most valuable, or challenging to catch. Hopping from rock to rock, dodging gorse bushes and following animal paths can leave you feeling stiff at the end of the day. It’s the most enjoyable work out I’ve ever tried. 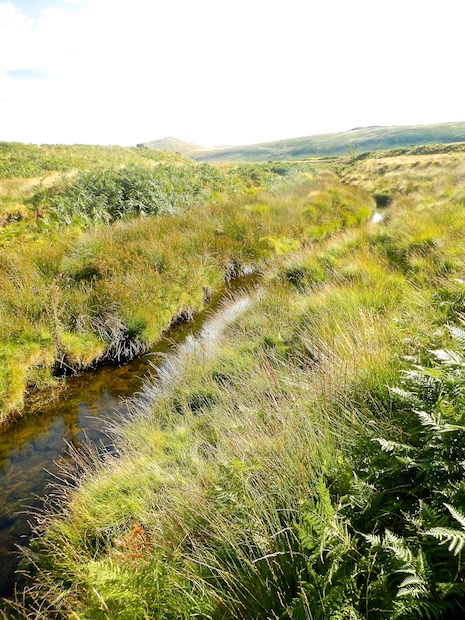 I get the rod back and change the well-chewed peacock herl fly for one with a yellow body and dark grey thorax. It’s supposed to be something like a Devon Half Stone. I drop it gently, short of the overhanging bristle grass on the far side. Delicate presentation is what Tenkara is great at. The hackle sits in the water surface, creating that dimpled ring, with the body below. And it all disappears in a split-second of violence as an unseen trout comes out from under the bank. Beautifully patterned, and the biggest of the afternoon. Would I have caught it if I was alone? Not if you believe in causality and the interconnectedness of all things - I wouldn’t have been there, in the right place at the right time. In the end it doesn’t really matter.

‘Thank you for bringing me here,’ says Pete as we admire the view of open plain and distant tors. Wild fish in wild places is what it’s all about. Luck plays its part but sometimes you have to give it a nudge in the right direction, which, incidentally, is west.

Catch more from James via his excellent blog