We are sure that The Itinerant Angler, Zach Matthews is a familiar name to many of you. His podcasts are essential listening. We got the chance to catch up with him and learn about the man behind the interviews.

First of all Zach, many thanks for agreeing to answer a few questions for ESF readers. Can you tell us about yourself?

I'm actually a trial lawyer. A lot of people don't know that. I defend companies against lawsuits for things like injuries on business premises or commercial truck wrecks. I knew I would be a lawyer from a young age, but I didn't want that to be ALL I ever did. In college I majored in English and minored in History and dreamed of writing for fishing magazines. I was very lucky -- in law school one of my pieces on the internet came to the attention of an editor who is now a good friend of mine, and he offered me my shot. The trick to being a successful outdoor writer is never trying to BE the expert.  Rather, you INTERVIEW the expert.  I'm no slouch at fishing but I could never get as good at any one thing as the true experts, and I think that's something a lot of people don't really understand when they set out to try to write.

As a long time fan of The Itinerant Angler I was wondering how it all came about and how easy it was to make it happen?

Not easy.  The website itself took hundreds of hours to build, code, and learn, and has been revised many times over the last ten years. The community there was equally hard to cultivate and, in the era of Facebook, proved almost impossible to keep together. In recent years I've focused on the "back end" of the site; writing articles, publishing video and photos, and of course the podcast.  The podcast itself is a beast.

I suspect there is a lot of prep work involved, do you do a lot background research  before the interviews and have an idea of what you are going to ask or do you have  a rough idea and then take in the interview in a slightly different direction if an answer takes it that way?

I do little to no background research per se on a given subject, because I want the interview to feel real and alive, but that doesn't mean I come in blind.  Over ten years of writing, interviewing, talking to people and of course doing a whole heck of a lot of fishing, you develop a pretty broad working knowledge of various things, even if I have never been lucky enough to fish in, say, Alaska. My #1 piece of advice to anyone looking to *publish content,* whether written, video or oral, is to become, if not an expert, then at least a very familiar amateur with the subject matter.  No one wants to read or listen to a piece where the interviewer is clueless.

Once you have conducted an interview how much work does it take to get ready for publication as a podcast?

Each episode of the show is roughly 30 minutes long. I shoot for 27 minutes of taped interview. I have to split the audio tracks, edit for sound quality (mostly noise removal now that I have decent equipment), then splice the show together and review literally every second of it to remove my coughs, chair squeaks and the occasional battle royale between my dog and cat in the background. After the show is complete I still have to host it, update the podcast XML date, promote it on IA, Twitter, and occasionally Facebook. All told each show represents around four hours of labor on my end.

Do you find that your journalistic skills make the interviews a little easier?

Undoubtedly. I am not a trained journalist but I have learned a great deal simply by paying attention. Want to be a great photographer?  Look at pictures; study the lighting, the framing, the equipment. Want to be a great writer? READ. Pay attention.  Scientists call this process "deliberate practice" and it works for everything; fly casting, playing music, even interviewing salty old anglers.

Is there a crossover between the written word and spoken word?

For me, I guess there is. I have always written largely in complete sentences and I suppose in complete thoughts. I don't think everyone is wired the same way, though, and there are lots of ways to be successful. Being a trial lawyer is not dissimilar to performing on stage, and you learn to carry the complete thoughts right out of your head and into the spoken word. You have to trust yourself to do that, and sometimes that means learning to fix a misspoken phrase on the fly. Confidence is the #1 eraser of "ums."

What is the interview you are most proud of and why?

There have been a few. Ted Juracsik's story is astounding and worthy of a novel. I didn't know it going in. Gary Loomis likewise has an amazing life history. My personal favorite interview was with author and now television host Steven Rinella. I believe Rinella to be the most intelligent person I have interviewed so far; his thought processes on sustainability, developing personal skills, and I guess how to be an outdoorsman with integrity are mirrors to my own thoughts. He has achieved a lot more than I ever will and he has earned his success. 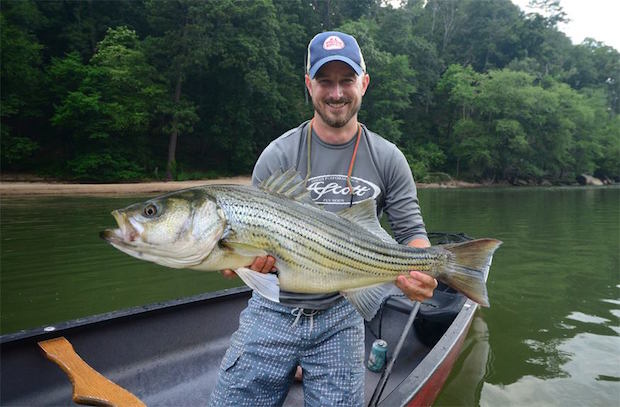 Is there someone you would really like to get on your show?

Former president Jimmy Carter and Patagonia founder Yvon Chouinard both come to mind. I have reached out to both. We actually almost had Yvon's interview scheduled one time, but he is a very very busy man. I think I got bumped for an American Express commercial, hahahah.

Do you use music in the show ( I really like it) to add colour instead of being able to use pictures?

That's a great way to think about it. I was living in Knoxville, Tennessee when I started the show, and that town is just permeated with what I guess you could call artisanal or organic music. Real people playing real instruments with real skill.

I enjoyed the podcast where you took your certification to become a casting instructor. Did this come about as an idea for the show or was it something you always wanted to do?

I had always wanted to become an FFF certified instructor and the show gave me a great opportunity to focus on the test.  I am proud of my casting abilities--I am a better caster than I am a fisherman, really--and I believe in the FFF program. That was a great opportunity. My only regret is that the sound equipment I used on that show was a bit substandard.

Are you doing any teaching as a result of it?

Yes I have.  I've taught several classes and done a bit of demonstration casting. I'm supposed to be helping some Boy Scouts get their merit badges this coming spring and I am really looking forward to that.

Over here in the UK your home base of Arkansas isn’t somewhere we know so much as a fishing destination but how would you describe it up in one sentence?

How about I describe it in only four words? "World record brown trout."

Streamer, actually.  I grew up as a nymph fisherman; my crowning achievement there might be the time I fought a 32" brown trout across 300 yards of the Cumberland River in Kentucky on 6X tippet and a #18 fly.  Sadly when I landed it I discovered the fish was foul hooked on top of the tail; it had taken my first drift and I missed the set. On the second pass it was so long its shimmy to avoid the fly must have brought the tail back in line. I've dry-fly fished some very classic water including the Henry's Fork in Idaho, but honestly my passion is big mean fish in unforgiving water on streamers. I consider my first permit (caught on a Sage commercial shoot last May in Mexico) and my largest striped bass (seventeen pounds, fought standing in a canoe on a 10 weight) to be my all-time best fishing achievements.

You have one day of fishing, where would it be?

Kerguelen Island.  I'll let you chew on that one. ;)

What is next for the Itinerant Angler?

Well I am actively releasing new episodes of the podcast this very minute, and I expect we'll have new shows rolling out into January or maybe February of this year before I take another break. The Gear Blog, Articles, Photoblog and of course Board are also chock full of great info.  I'd love to see you there.

Be sure to visit the Itinerant Angler website for podcast details, news views and articles too