Pete Tyjas give some thought to the contents of his fly box.

The fabric in which I am woven is stitched by fly fishing. My life, my work and a lot in between is dictated by hatches, rods and the state of any particular stream that is deemed “hot” by my fishing friends.

The chances are, that if you are reading this then you might feel the same. It might even be a little more or perhaps a little less. It doesn’t really matter how strong the intensity is. You’ll be the only person who knows what it is and what it means.

Friends phone. I know, I suck at picking up the phone sometimes and this is a sort of public apology for that but I hope they understand. It is usually because I am on the river or have sat down to tie a bunch of flies I think I need and have to give them my total concentration. If I don’t, then I know I’ll lose the thread, literally, and the dozen or so exact copies I meant to tie up end like a shortened version of a Darwinian example of evolution with the crappy first example that appears to have crawled out of the primordial soup all the way through to version 10,11 or 12 that appears to my eye at least to be the finished, fully functioning product, the top of the tree and can be no better. It has evolved or so I, at least, think.

The punch in the teeth that accompanies this theory somehow still always amuses me. You probably know the punchline already but in case you don’t the thing is, that version 1 of the “species of fly” usually is the best. It boots the natural selection theory right out of the window especially when version 10 fails and spends the rest of eternity stuck right back in a dark recess of my fly box. How many times do I have to say to myself “simple is best”? 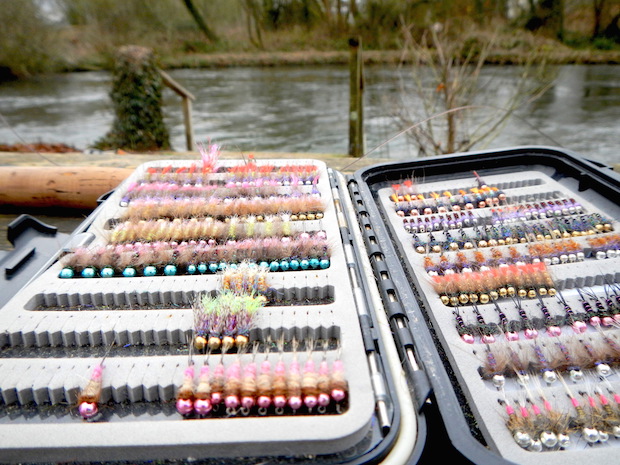 I find it so easy to think that perhaps the fly pattern I am so desperately trying to stick to could be a little better with say, a shuck instead of Coq de Leon tail and so I leave the trail of conformity and head off into the realms of the artistic or abstract. Yeah, that’s it, I’m an artisan fly tyer. I can kid myself a little that I truly am, only to find the subtle change I have made has already been done before me and the overgrown, uncharted track into the world of a new fly pattern isn’t as overgrown and unused as I thought. No, it is just another path that someone has already trodden and just covered it up a little in the hope none else discovers it and it will be, or is, the pattern that makes the difference. I have lost count of the number of conversations I have had where it dawns on the two of you who are speaking that you are saying exactly the same thing but just coming at it from a very slightly different direction.

Before I worked with Lewis I thought I was taking some interesting directions with the fly patterns I use. I hadn’t hooked up with him for a few years but one look inside his pristine - and I mean pristine - fly box told me we were pretty close to singing from the same hymn sheet. We all have our own ideas about the fish we are trying to trick and we’ll use whatever we can to make the scales tip just a little more in our favour. In recent times the variety of materials available allows us to be ever more creative. For me, the introduction of tungsten beads has been a significant one, something I’d almost go as far as calling a game changer. How did we ever cope? Oh yes, we did. Of course we did but the changes we see are often for the better and work too.

Having said that, I always like how some of the older fly patterns have a renaissance, sometimes short lived  and in other cases they just don’t go away, they are a constant in our fly fishing lives. I guess the reason for this is a simple one, they are good. They catch fish and the chances are that if you are a fly tyer you’ll have the materials anyway so you can knock a few out or if you pop down to your tackle store you can buy them. The fly tying companies will know what is hot and what is not and so you can buy them easily.

I go through stages of tying and sometimes love it and other times loathe it. A couple of years back we had a rain soaked winter and  I sat at the vice religiously. The grayling stream I like to fish was shot from November until my local trout river opened in March. I realised I couldn’t tie any more flies, I had nowhere left to put the things and they pretty much lasted my guiding season. Having that time off though let me rekindle my passion for tying again and the following winter was drier. I was pleased and I know my wife was too. I think the walking round the house muttering to myself and shaking my head was getting too much every time it rained no matter how much she loves me.

I have to admire pro fly tyers. Knocking out large numbers of flies for someone else takes some dedication. I know when friends tie flies for me I use them carefully as I know they want me to use and enjoy them. I had some flies that my wife gave me that were tied by AK Best that took me seven years to use as I liked to admire them from the safety of the house where no harm could come to them but when I did I loved it and even better they worked really well. I also had a fly given to me by one of my fishing heroes, Mike Weaver. I actually kept it in my fly box for a long time and remember hovering over it when there was a hatch of midges. I never used it but knowing it was there was enough. The worst part was that I must have left a pocket unzipped on my fly vest and lost two fly boxes, one of the lost boxes contained Mike’s fly. It must have floated off down the Taw but not in the way I had always imagined.

That incident was the day before I had a long spell of guiding and I was left with little to use. Thankfully I have an excellent fly tackle shop nearby that helped me out along with a fly company who happen to be close too. They saved my life and I found I had a few more classic patterns than I might usually carry but you know what? They worked just fine.

Pete Tyjas is a fly fishing guide based in Devon