It has been raining almost steadily for the last two days. It is the end of May and the river is in spate. It feels as though there is enough chance of a salmon to get out the switch rod and a box of tube flies. The chance of a salmon and the definite possibility of a sea trout.

Sometimes being a fly fisherman can put you at odds with the general public, when dogs go swimming, access points become mini-festival campsites, and when it comes to rain. I like rain. While the majority are hoping for a long, hot, dry summer I am hoping for some rain. Especially on weekends when I can go fishing. Rain brings migratory trout and salmon into the moorland rivers.

Migratory trout are a real fascination of mine. It stems from our native sea trout that visit the West Country. Fish that are as old as the rivers themselves, and through Victorian ingenuity have come to populate other far off rivers, growing to huge sizes in Tierra del Fuego and other exotic places, adapting to the differences in Atlantic, Pacific, and even Indian Oceans.

My fascination extends to sea run brook trout, coastal cutthroats, and steelhead. It’s hard to look at photos of mist clad valleys in British Columbia, slopes covered in pine trees and the river running dark along the bottom without wanting to be in it. I will get out there someday, but in the meantime I’m trying to gather as much intelligence as possible. It was this quest for steelhead information that lead me to an article in Fly Fisherman magazine about Lani Waller’s method of rigging tube flies for steelhead. These migratory rainbow trout have a habit of coming short, and in attaching the hook by means of a surgeon’s loop it’s possible to set it to hang further back in the dressing of the fly. Sea trout also come short, and I wondered if the same rig would work as well for them instead of the more traditional stinger or tandem set up. It also has the advantage of making it easy to change the hook without having to cut everything off and start again - which is handy on the boulder riddled water I usually fish. 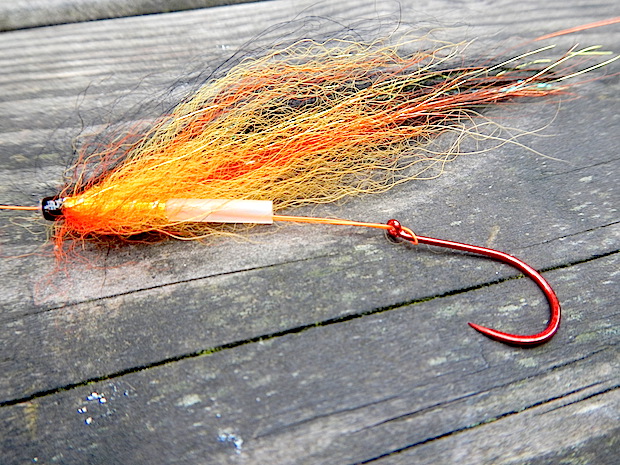 To rig a tube fly with a loop the first thing to do is to thread the end of the leader through the tube fly.

Next, tie a surgeon’s loop (two or three turn). The size of the loop can be altered depending on how far back you want the hook to ride.

Lastly, thread the loop through the eye of the hook and over, pulling it tight to secure it in place.

On that day at the end of May, with the river running several feet higher than usual, I tied on a brass cascade bottle tube and rigged the hook to ride points level with the tail of the dressing. I stepped into the river, with water up to my knees on what is usually dry bank, and fished down the pool. 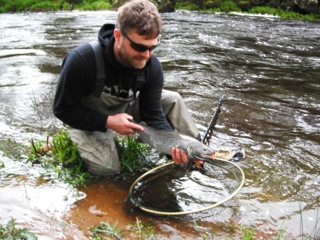 As the fifth or sixth cast had swung across the tail of the pool and was coming on to the dangle below the overhanging branches of a hawthorn tree something heavy smashed it. There wasn’t any question of whether or not to strike, the fish was on and the water erupted angrily as I lifted the rod and applied some steady pressure to draw the fish away from the rapids below and into the deeper water of the pool’s middle. Salmon or sea trout?

The fish jumped high, a foot or two into the air, and I saw the squared off tail and heavy spot pattern of a good sea trout. We played a game of cat and mouse, I drew her up towards my position and each time I thought I could reach her with the net she would run out into the pool making music with drag on my old Sage reel. With every leap and run I could see or feel the head shaking, testing the strength of the hook hold.

When she finally came to the net my arm was aching and my hands were shaking but the barbless hook was held fast in the scissors. After cradling her in the water while she recovered her strength I let the fish go, but I will be keeping Lani Waller’s method of rigging tube flies for all my sea trout fishing, and that long anticipated trip to B.C.