Toby Coe goes in search of an unusual top-water quarry.

As a hobby or pursuit, fly fishing can sometimes have the reputation of being somewhat stuffy and conservative, particularly in the UK. This is true both in the manner in which we dress (or are perceived to dress - waders and a flat cap are not exactly cutting-edge fashion) as well as the species that we pursue. Increasingly however, the latter is becoming less and less true. 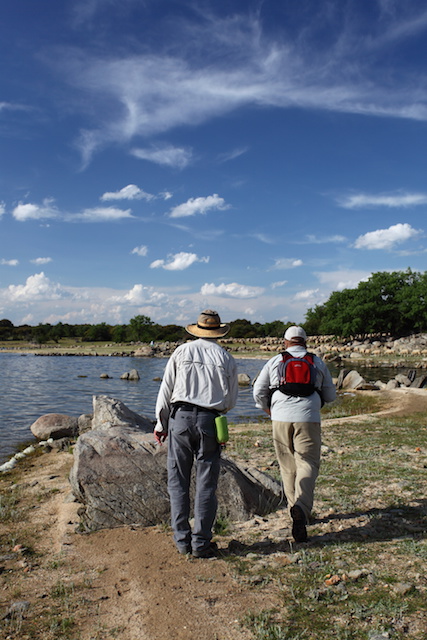 Roll the clock back fifteen or twenty years and the list of species pursued with a fly rod was definitely quite conservative. However, due to an increasingly globalised world through both travel and communication and ‘outside the box’ thinking from a few anglers who have led the way, the list is now very much longer.

Fly fishing for coarse fish, while not necessarily a new pursuit, is certainly more popular than it used to be although it still remains somewhat on the fringes of our sport in the UK. Although I do chuck flies at coarse fish occasionally, I wouldn’t say it was a regular pursuit of mine. I’m not really sure why this is, although in part it is due to my mental image of how we catch coarse fish – largely prospecting ‘blind’ for unseen fish. Folks who regularly fly fish for roach, chub, dace and perch will likely tell me that the problem is entirely mine and that I need to pull back the blinkers. 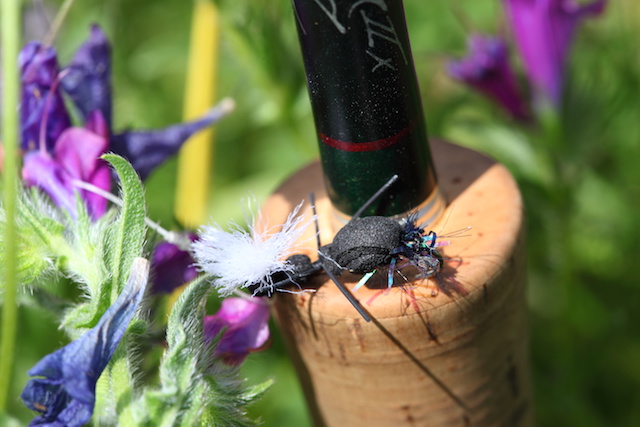 They would probably be right on both fronts, but despite my attempts to date, that mental image remains firmly lodged in my head and I keep pulling the apple cart in the same direction. Sometimes, however, something comes along that draws one of the blinkers aside, I get momentarily distracted and there are apples going every which way.

In most instances, this is because a destination or species comes to my attention that tickles a couple of my fly fishing triggerpoints; either (a) big and/or beautiful fish or (b) sight fishing. The latter is the element of fly fishing that for me is the single most exciting thing about our sport. The ability (or rather given the limitations of the gear we use, the need) to get up close and eyeball the fish we are trying to catch and actually watch it take our fly is borderline transcendental. 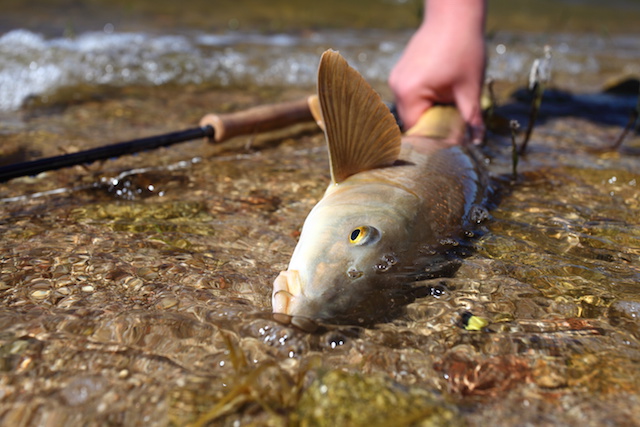 It is for this reason that I pricked up my ears a few years ago when a friend of mine mentioned sight fishing for barbel on dry flies in Spain. I would wager that you have probably already read something about this, but in case you haven’t I’ll quickly summarise. There are lots of lake reservoirs in Spain and in many of them there are large populations of barbel, of various different species. These are fish that originated in the rivers which were dammed to form the reservoirs and they have adapted to their new surroundings. Part of this adaptation has involved finding new food sources and as a result they have learnt to cruise the shallows, looking both up and down for their food. At certain times of year, they will readily take a dry fly (typically a large beetle or ant pattern) from the surface of the lake, which, given the down-turned morphology of their mouth is not that easy for them.

The first trip I took to Spain a few years back was indeed exactly as I had heard. Walking the edge of the lake, one looked for cruising barbel that were anywhere between 3 – 6lb, popped a dry fly in front of them and if you got it right they would tip up, suck the fly from the surface, give a quick head shake and then bolt off on a line-stripping run. Given that on a good day you can expect to cast at dozens of barbel, it adds up to an immensely enjoyable day on the water. 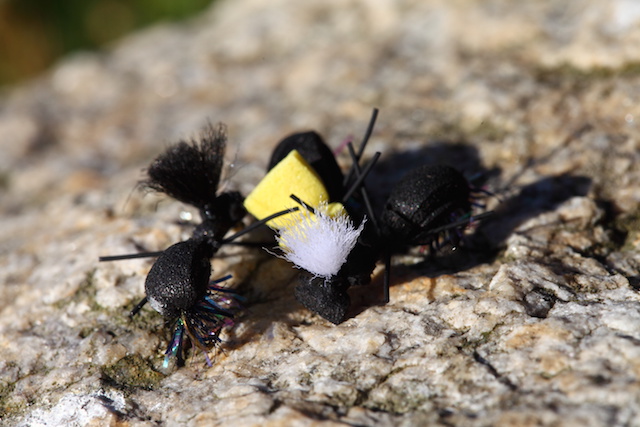 A trip last year to fish with guide (and friend) Luis Meana rekindled my love of this fishing. Luis took us to a couple of lakes that I hadn’t fished before. The last one we fished was a monster, with a total surface area of around several hundred km2 and a heavily crenelated shore, which affords a lot of potential water to fish. 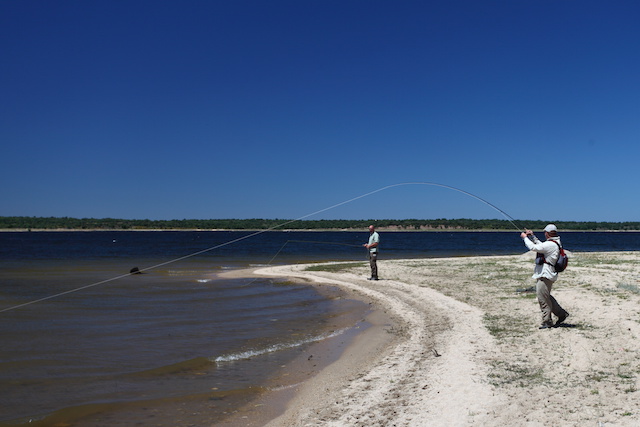 There are barbel species in this lake which I hadn’t caught before, principally Barbus microcephalus and Luciobarbus comizo. Comizo barbel are a very interesting species as they become quite predatory when they are mature and also get very large, up to 30lb+. They have a distinctive look, with heavy shoulders and an elongated nose and mouth.

The day that fishing buddy Howard Day and I enjoyed is one of those that has been seared into my memory. We struggled in the morning, both to find fish and then to actually land any (I think I lost four by the time we stopped for lunch). We berated ourselves over bread and cheese, pulled ourselves together and set off again, determined to actually land at least one Comizo barbel. By this point, there wasn’t a breath of wind in the air and the lake was completely glassed off and mirror calm. 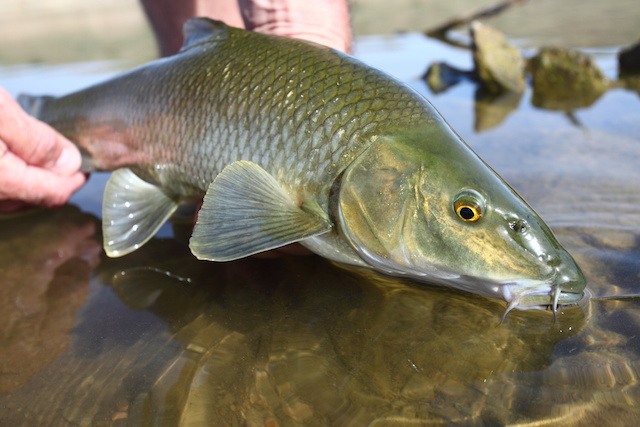 We walked the lake shore with one person trying to remain up high to spot fish and the other down at the lake edge, ready to cast should anything be seen. In the conditions we had, this made for fantastic fishing. We often saw fish well over 200 ft away, cruising the shore, laid up by the bank, or swimming high up in the water on the drop-off. In the flat calm conditions, the fish absolutely, positively could not see you before it saw the fly or they simply drifted off into deeper water. 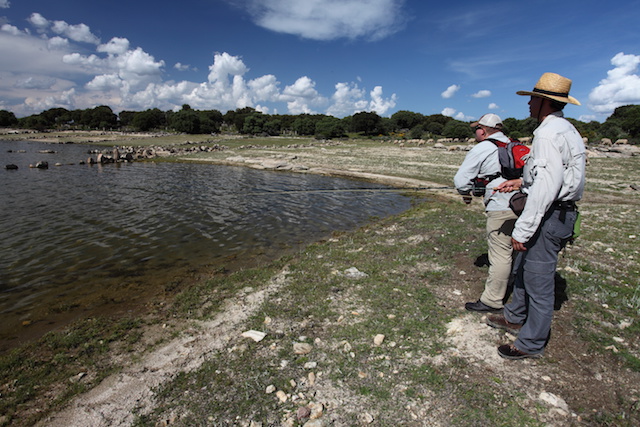 Some fish simply melted out of the shallows when we were implausibly far away, others would come up and inspect a well placed fly and then refuse it. We had a handful of barbel (particularly those swimming on the surface in deeper water) which rushed the fly from several feet away as soon as it landed, only to hit the brakes and stop under the fly once they reached it, before continuing on their way. 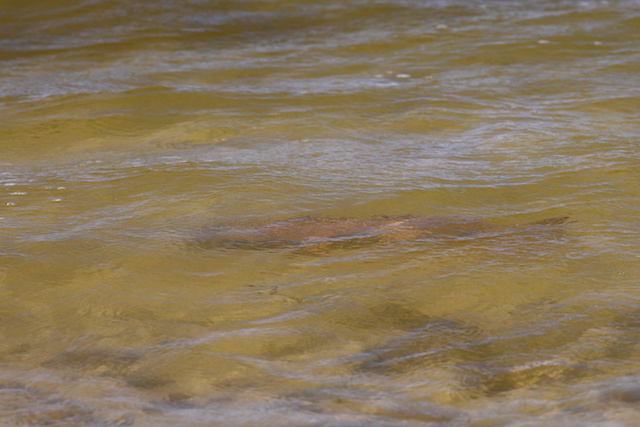 When everything came right however, we were able to watch fish coming up through crystal-clear water to inhale the fly before hammering out of the shallows with dogged head-shakes and short, spiky runs. It was often technical fishing, calling for long, accurate casts and a very careful approach, but at the same time it was phenomenal, laugh-out-loud, fist-punch-the-air fun. 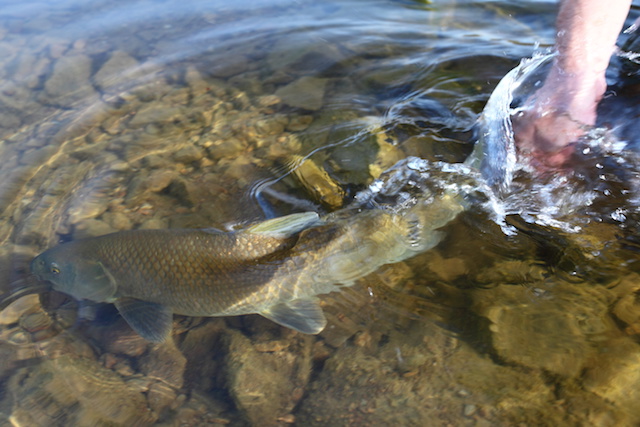 We ended up catching a dozen between us and almost every fish was memorable. I’m glad I pulled back the blinkers in this case. They might lack an adipose fin, but if there is a fly fisherman out there who can experience the kind of day we had and not come away buzzing then they may want to take up golf. Or possibly buy some tweed blinkers. 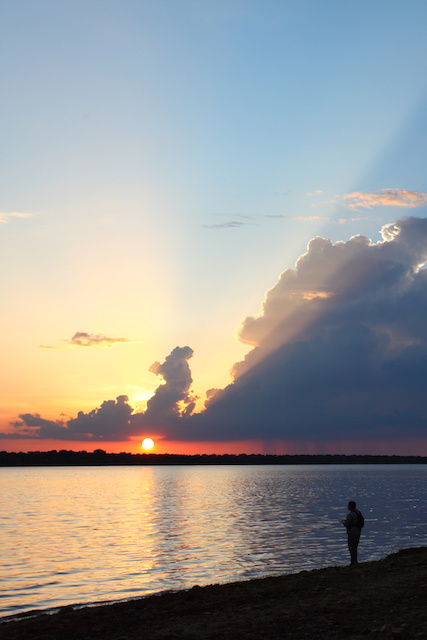 Toby Coe is a writer, photographer and damn fine company on the river. He is based in Devon UK. More from his website here

Toby booked his trip via Outside Days