Pete Tyjas takes a slightly different approach to his sea trout fishing and shares what he has discovered over the years.

When I mention sea trout fishing to people they naturally assume I am heading out under the cover of darkness to swing wet flies or surface lures for sea run brown trout.

To me though, I like nothing better than casting either a dry fly or nymphs for them during daylight. Often, this sort of fishing can be associated with a river with some colour but I have found that with stealth and good presentation you can catch them in even the brightest sunlight and low water conditions.

Firstly though, it is worth thinking a little about our quarry, and when we do, one of the most common questions I hear is if they feed when in the river. I have listened to compelling arguments from both standpoints, especially about caught fish that have had their stomachs opened and in some cases they are found empty and in others jammed full of bugs. 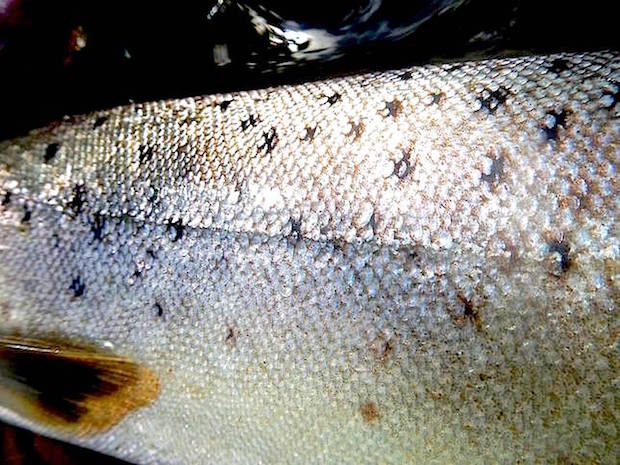 All I know, is that I have seen pods of sea trout rising during a hatch and have cast to them and caught them. Part of me thinks that they do actually feed, or perhaps once back in their home river they revert to the same feeding patterns they had before heading out to sea, or it is just plain, simple instinct? To be honest, this doesn’t bother me too much as all it does is give me a big clue as to where a sea trout may be holding.

A large part of catching a day time sea trout is knowing if they are in and where they might hold. The second point is relatively straight forward, I’ll look for well shaded areas off the main flow of the current and work my flies in these areas.

When it comes to presentation I much prefer casting upstream to the fish. A skated dry fly might be okay in lower light or coloured water conditions but I want the fish to see as little of me as possible and so I prefer to come at the fish from behind. I will also try and keep out of the water as much as I can as tell tale ripples sent up the pool will set the alarm bells ringing. If I need to get into the pool and this has happened I will often wait a while until the water has settled again.

If there is any hatch on the water I will try and match it, but if not I prefer to fish a bigger fly than the 16s and 18s I normally fish for browns, usually opting for a caddis pattern or stimulator in size 12 or 14.

Over the years I have learnt the timid nature of sea trout especially during daylight and that my first or second cast will pay the biggest dividends. If a fish hasn’t showed I try one more cast and then move on as there is a good chance I have alerted them to my presence. The first drift I allow to float naturally but often on the second I will twitch the line a little with my non rod hand. The “I’m stuck, please eat me” ripples can be too tempting even for the wariest of fish. It is worth trying with trout too.

If fish are rising, a midge pattern can work really well and I know some friends who swear by terrestrial patterns. We have even caught them during a blue winged olive hatch.

If your local river has a run of sea trout and also a mayfly hatch this can be a bonus. The mayfly hatch on my local river, the Taw, can run from the second week of May until mid June. This works really well with the first run of the bigger sea trout and I have seen fish as big as 8lb rise to the French Partridge of someone I was guiding only to snap the 5lb tippet like cotton. Later that day we caught a smaller fish of 2lb on the same method that was a little easier to control. 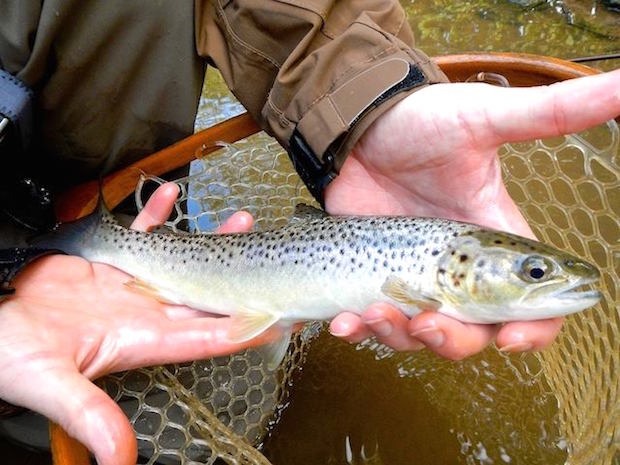 When fishing the dry I have found that if the fish are going to take they will do so in a more sedate fashion than regular river trout. It is worth easing back the strike speed just a little. The take is a clear one and there will be little mistaking it when your dry dips.

To me, finding a sea trout and catching it on a dry in bright sunshine is a great challenge and something that isn’t going to happen every day. Tying your dry on a dropper and a nymph on the point duo style can also be very effective. I fish this at distance and cast up the pool rather than walk into it, preferring the slight disturbance of the line landing on the water to the noise of my footfalls. If there is colour in the water and I think fish are running I do use euro nymphing techniques and they can work well too. I remember a memorable morning when I fished for just two hours and landed three sea trout and lost two more fishing this way.

"I have used streamers in low, clear water and watched with great interest"

When it comes to nymphs I have had success with black patterns with silver ribbing and a tungsten bead head, along with the ever faithful pheasant tail in various guises.

Sea trout seem to like an induced fly so try this and lift your rod to raise the nymph, or even try a slightly more aggressive twitch of your fly line - this will make the nymph kick up a little which is usually irresistible to sea trout. 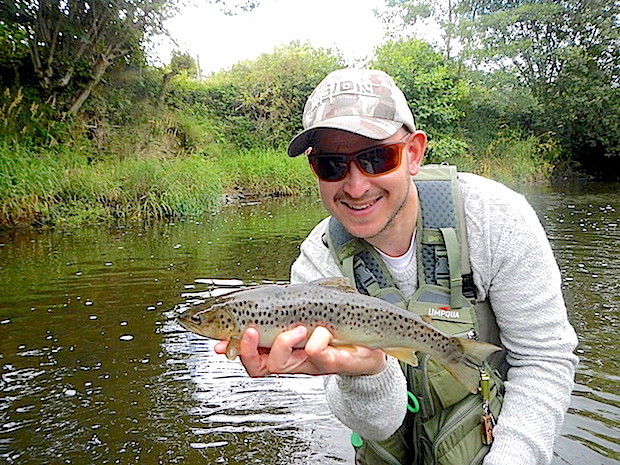 I have also used streamers in low, clear water and watched with great interest as a sea trout follows the fly out of its lie almost to my feet without taking, then does exactly the same again. When this has happened it is rare they will take the fly even with a change of pattern. If they’re going to take a streamer they will usually hit it the moment the fly starts to move.

The non taking fish makes me question whether it is inquisitive or territorial but not to the point of biting the fly. I have seen exactly the same behaviour from brown trout and salmon too.

Fishing this way is exciting and, dependent on water height, I’ll fish the fly on a floating line with a 7ft leader. If the water is a little high then I’ll use a midge tip or intermediate line. My fly will have weight in it too and I'll switch to a 6wt rod to help me cast out the heavier flies.

Generally speaking, the size of fish I catch during the day are in the 1lb to 3lb range and if I know I am targeting them my 4wt rod is ideal, I just up my tippet strength a little to 4 to 5lb.

I often hear stories of day time sea trout being a happy coincidence during a day's trout fishing, but with a little thought they can be a target species too.

Pete Tyjas is a fishing guide based in Devon UK