Boiling temperatures, a dog that is about to get lucky and a dude with some awesome fishing shorts. Stan Mankov explains.

July and August was really hot this year in the Balkans. Dry as well. Temperatures rose up to 40+ degrees Celsius. Not the best conditions for trout fishing at all. The only good places are found above 2000 meters sea level at my favorite high mountain lakes or on some of the rivers during those late summer afternoons.

"He caught his first ever trout and I had two over 40cm, what a great afternoon"

Here is what happened in the end of July. I found a female beagle and my dog Firsty was about to score his first goal but it was way too early when we arrived there so he had to wait a little more. However I had those two days to spend in the area of south west Bulgaria and visit my grandmother who lives nearby. There are plenty of rivers there but it was so hot I could not imagine fishing before 6 pm or maybe even 7 pm. 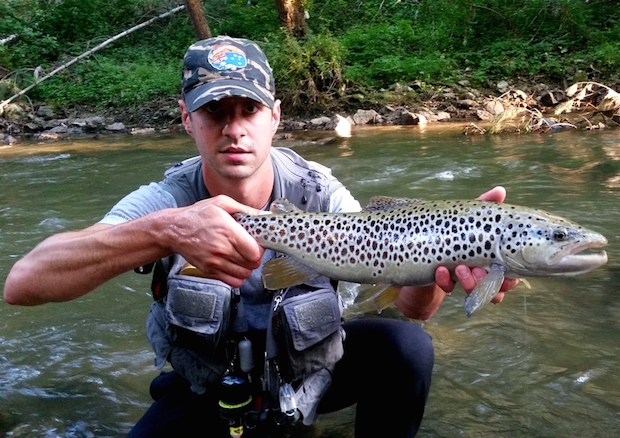 About that time I was on the river with my young friend Nikola who I had to teach and help to catch his first trout. We were wet wading and our biggest problem was that we were wearing shorts. On this river as well as most of the others there are huge gadflies which love to silently land on any part of wet human body and painfully bite. Bite like they want to rip a part of you and eat you alive. It really hurts but we had to not mind it and continue fishing. Luckily I caught the first trout as soon as we started. Then a little later I hooked a bigger one about 40 cm. What a great afternoon. Fish in that river have stunning colouration and are really fascinating. Me and Nikola had almost three hours of really good nymph fishing as well as a fish caught on a dry in the very last day light. He caught his first trout ever and I had two fish over 40 cm which was really good surprise. 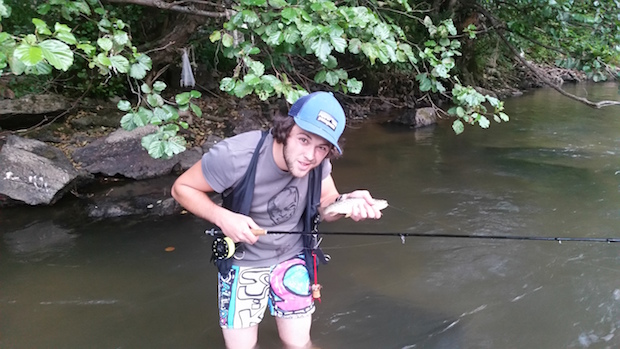 Next day about the same time we were on the river again. This time as I couldn`t find any long trousers to wear I had to wear my granddad`s trousers. I was sure they will bring me luck as he was the only member of my family that was an angler and taught me fishing. May he rest in peace! 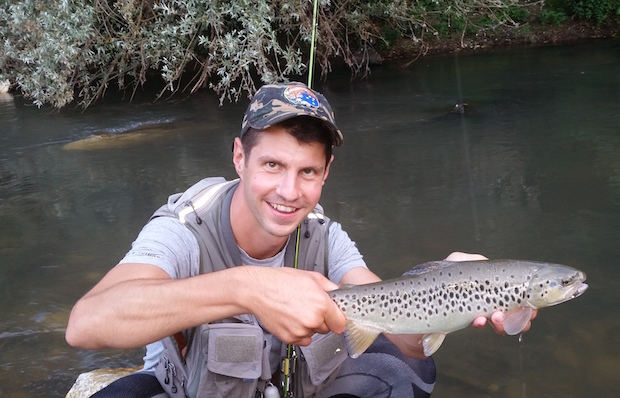 No gadflies biting and a bottle of water in my vest made me feel ready for that trip. I started where I caught my first fish the previous day. On the sixth cast I hooked into a fish. Wow it must be a big one as I couldn`t lift it off the bottom and it was much heavier than those 40 + fish I caught yesterday.

"Certainly one of the most beautiful fish I have ever seen, the tape measured 58cm"

After 10 minutes of fight and running after it 200 meters downstream I saw this stunning male brown and finally netted it. Certainly one of the most beautiful fish I have ever seen. Quick few shots and released back in its environment. The tape measures 58 cm. What a start. This was more than enough for me. I continue to fish and we caught some more fish but nothing as spectacular as that big brown. 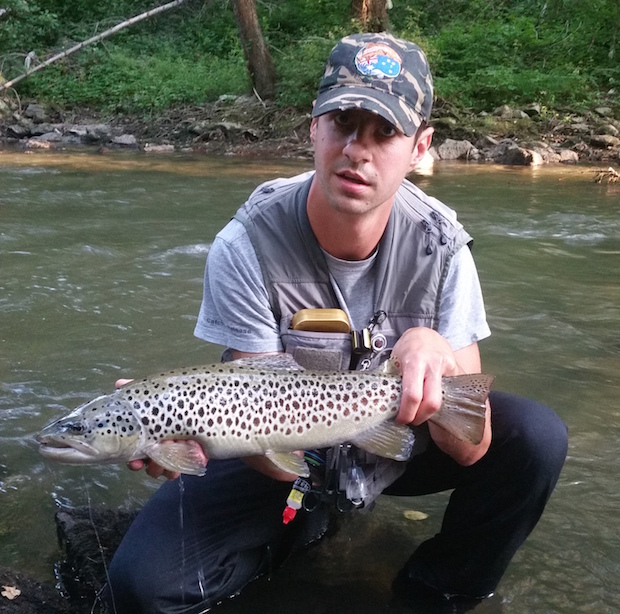 After those two days I really felt lucky. I had to head back home and prepare for the high mountain lakes I`m planning to fish during the weekend. I`ll tell you about them when I get back. Hopefully some big risers are cruising there looking for some ants. I`ll find out and let you know next time.