Nick Thomas tries a new pair of wading boots and shares his conclusions.

Traditionally wading boots have taken three approaches to providing anglers with grip on the bottom while wading; felt, studs or cleated rubber. Felt gives good grip on smooth slimy rock but act like skates on wet grass and nowadays are viewed as ecologically unsound due to their potential to spread invasive species from water to water. Carbide and other hard studs work well in cutting through weed and slime, but only function properly if they can find good purchase on the underlying rock. If the rock is rough or softer than the studs all is well; if not bad things can happen. One of my worst wading falls was off a weed covered wave polished boulder on the shoreline in Pembrokeshire; the studs cut through the green slimy weed just fine and then skated off the hard granite underneath sending me over backwards with a crash. I was very lucky not to break any bones; my reel on the other hand was ruined with the cage bent beyond repair. Cleated rubber soles are great for walking in and work well on gravel or clean rock, but begin to lose traction at the first hint of weed or slime; even modern ‘sticky’ rubber soles don’t really cope well with wet slimy conditions. Since none of the three sole types works in all circumstances there’s always going to be a time when you feel less than secure, and if you are wise, back off from trying to get into position to fish that promising run or cover a rising fish. 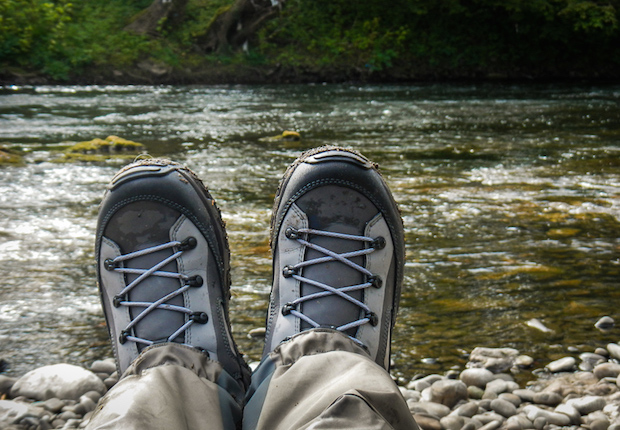 Now there is an alternative way to wade more safely and maybe catch a few more fish as well. Patagonia’s new Foot Tractor boots are based on some good lateral thinking and the company’s experience in making climbing gear. Rock anchors used for climbing can either be made from hard steel or soft aluminium. Steel is used for old style pitons which are hammered into cracks and rely on the steel cutting the rock to form an anchor; essentially the same principle as studs on wading boots. Aluminium anchors are only loosely placed into cracks but deform under a shock load allowing the rock to bite into the soft metal jamming the anchor and securing a falling climber. Take it from me as one who life was saved by one on a cliff in North Wales, they really grip.

The Foot Tractors boots apply the same principle; rather than trying to make metal grip rock, the rock grips the metal. The boots have a series of soft serrated aluminium bars along the soles which are screwed through the cleated rubber to fixing points embedded in the sole plate. The soft aluminium is hard enough to cut through weed or slime on rocks but soft enough to deform and grip any texture and grooves in the rock giving a very secure grip. The first time I wore my pair in the river I was reminded of the first time I wore crampons for winter mountaineering; an instant transition from slippy insecurity to a feeling of being locked to the slope I was walking up.

When new the aluminium plates are shiny and polished. After a day’s use it’s easy to see where the aluminium is indented by gripping all the rocks that you might have otherwise slipped on. I was a bit worried the first few times I wore them that the aluminium would quickly wear away, but in fact the loss of metal is minimal. I’ve read on-line reviews from the US where the boots have been on the market longer than in the UK, used for a year and are still going strong with the original aluminium bars. In addition to the metal grip bars the boots have an excellent toe box and a high rubber rand around the boot, very much like high end mountaineering boots, which protect your feet when bumping into rocks on the river bed. 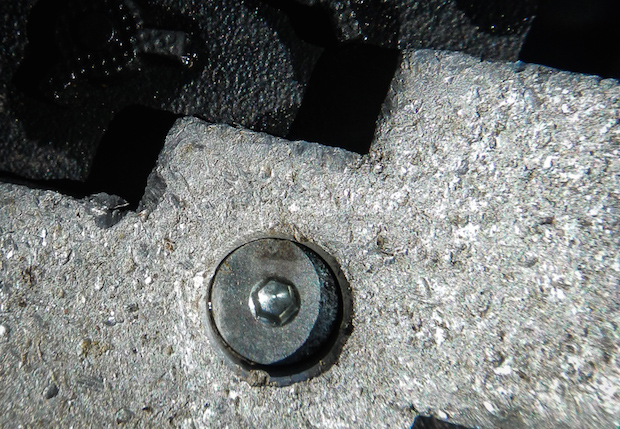 These boots are not cheap. I did get a bit of grief from the Domestic Expenditure Controller for proposing to spend £250 on another pair of wading boots. Playing the Health and Safety card and pointing out that they may well save my life one day got me approval in the end though. In fact you can pay the same amount for top of the range rubber soled boots from other manufacturers which won’t provide anything like the same grip or safety. I regard it as money well spent for peace of mind and increased pleasure through a day’s fishing. 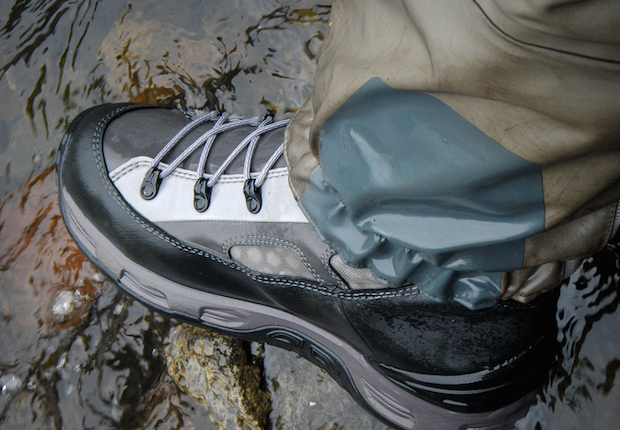 When you pick them up Foot Tractors do feel heavy, certainly heavier than my Patagonia Ultralight boots. However once on they are extremely comfortable and I have no trouble walking a couple of miles in them up and down the banks of the Taff in the course of a day’s fishing. I don’t expect I’ll wear the Foot Tractors all the time; for small streams or where I know I’ll be wading only on gravel I’ll take the Ultralights. However for big rivers, strong flows, deep water and variable wading conditions over rock and boulders I wouldn’t wear anything else. I certainly catch more fish by being able to get into position safely and confidently in places where I would fear to tread wearing lesser boots. A word of caution however; wearing these boot does change the wading experience and will make you feel much safer, but they are not a substitute for common sense, self-preservation, or a wading staff when you need one.