With the release of Dom Garnett’s new book of fishing tales “Crooked Lines” out this month, this exclusive extract for ESF readers evokes the pleasures and pitfalls of fly fishing on a craggy, forgotten stream. 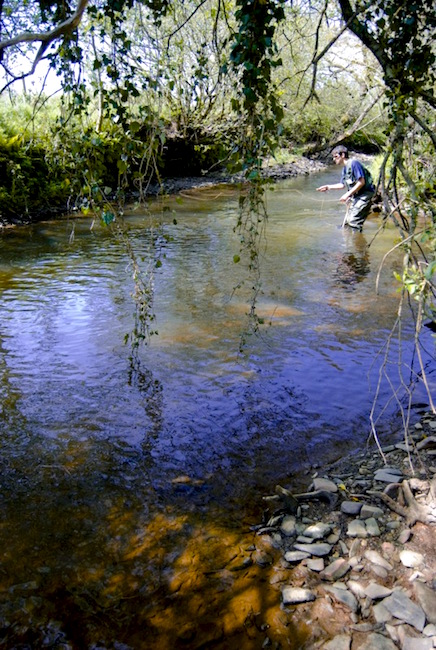 Trouble in paradise: a tangled stream (Pic by Frazer McBain)

For almost any angler, the idylls of the sport are a very different realm to a wet Sunday afternoon. But it is in the often well-heeled world of game fishing that the gulf between fact and fiction can be starkest of all. There still exists, at least in the popular mind, a sort of fly fishing nirvana populated by the upper crust. For these happy few, life is about carefully maintained decorum and equally well-maintained chalkstreams, far away from the hoi polloi and their muddy, stocked ditches. We imagine smooth, open glides of water, where traditional flies tempt big, flawless trout; a place where men still sport waxed facial hair, smoke pipes and speak openly about the virtues of the Greenwell’s Glory or Wickham’s Fancy without blushing.

The world I am talking about is, of course, largely a work of fiction, a place that may as well be Middle Earth. Perhaps that’s because this sacred realm of idyllic yet elitist tradition scarcely really exists any longer. In truth the exclusive beats of today are populated by more banking executives than retired Colonels, complete with three-pound trout born on fish farms. Not that I rub shoulders with many business executives, you understand. Indeed, I have spent much of my life with coarse anglers. Some very coarse anglers, to be precise. The sorts of characters I usually encounter on the bank smoke Superkings rather than mild pipe shag and prefer tracksuits to tweed. Naturally, I’m trying to do something about this. Trouble is, I am currently as short on well-connected friends as I am on hard currency. A syndicate ticket on the Test, for example, would probably require me to sell an organ.

The fact of the matter is that my own fly fishing career has not so much been a tale of sunny chalk streams and mayflies, but a melange of muddy tracks, biting insects and barbed wire fences. But there’s something magical and unexpected about wading a craggy stream where nobody goes. 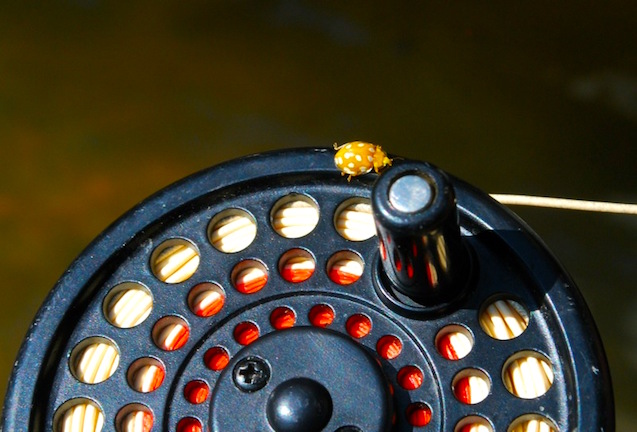 The first rule of the game is simply to find your own affordably wild river. It may sound easy, but some parts of the Amazon basin see more visitors than the places I frequent. A friend of a friend’s old man happens to be a farmer who happens to have a stream on his land which he lets the odd angler try for a fiver on rare occasions. Convenience fishing it isn’t. No cosy swims or easy parking here. “Unspoiled” I sometimes say, by which I mean bordering on unfishable.

A high summer’s day is perhaps the most risky and promising time of all to explore this rough and ready school of stream fishing, on today’s random river. Today’s mile or so walk, having parked next to a pile of rusting farm machinery, is not altogether unexpected. Crossing the edge of a firing range is slightly more, shall we say, unscripted. I already have my suspicions about the colourful little cases littered around, before a shot rings out. Before I can be misidentified as a poacher I make my way swiftly off in the other direction. After all, fly fishing is a sport best enjoyed without being riddled with gunshot.

Although much appreciative of still being alive, the river itself is sadly missing. I must have read thousands of words on finding fish, but nobody to my mind has ever covered what to do if you can’t actually find the water. The Compleat Angler has no mention of wire fences and shotgun shells. As far as I remember, Walton’s England was one of meadows and milkmaids, not pathetically cramped streams owned by UKIP voters; Charles Cotton definitely never said to Walton “so Izaak, where’s this sodding river you keep banging on about?” Which brings me to rule number two in the budget fly fisherman’s handbook: never trust any directions that end in the words “you can’t miss it”.

After one or two branches in the face there is the river, finally. And worth every step. I simply love small, wild streams where there are no Sunday anglers or stocked fish. No local know it alls or formbook to study. Just a meandering little brook stuffed with wily little trout. Of course, you do have to get into the water first, which can be no mean feat.

The obligatory barbed wire fence comes first. As if set to some heinous formula, these vicious obstacles have a nasty habit of being too high to climb over, yet too low to go crawling underneath. Somehow, I get over without putting holes in my waders or becoming a soprano singer. Then, for my next trick, comes the descent into the drink. I find a convenient gap, where there is a mere six foot drop into the water. It’s a feat I manage with little grace; a man plunging into the water, size fourteens first, has obvious consequences on a little river- every fish for about half a mile spooks.

But as soon as I am wading and casting, the day quickly gets better. Not easy, but better. A world away from a big, well-coppiced river, these surroundings are more like a scene from “Heart of Darkness”. It’s somewhat tight here to say the least, a maddening blend of fishy looking corners and intervening branches and snags.

But it’s this trickiness that is addictive. It is a mixture of luck as well as skill, flipping low casts into shady water, extracting trout from the stones and catching your flies in trees. Wading, watching, cursing, chancing and just occasionally winning.

The art of the impossible cast has a particularly fatal draw for me. A hair’s breadth can divide victory from certain death and I’ve probably lost more flies than a fire at Fulling Mill. Today it is sod’s law that the most spectacularly craggy little corner is the fishiest-looking of the lot. Tell tale rings emerge from the trout rising from within their little sanctuary. To say that behind me there is little space would be a crude understatement; if the branches on one side didn’t look good, the other bank is totally choked with Himalayan balsam.

Inch by inch I creep smartly, ever so carefully into position. One step too few and my cast will find the trees and assorted godless, tangled things behind; one step too far and those keen-sighted trout are sure to bolt.

The first cast catches the foliage behind me. I let out a hushed profanity as I pull at the line. Luckily the fly drops free. I wait anxiously for some moments, watching to see if the fish are still rising after this clumsy first serve. This time, to my own disbelief, I guide my little dry fly slap bang on the money, just under the branches. Almost immediately there is a little sip and I lift instinctively, feeling the pulse and arch of the rod. 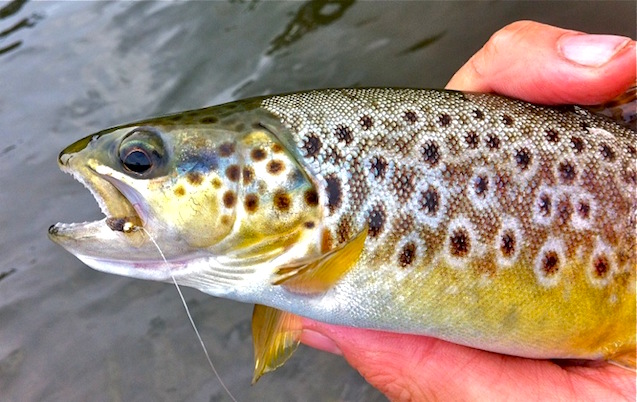 There is nothing wilder looking than one of these bush trout, riddled with spots and smooth as stone. As I release the fish, I’m fairly certain this will be the first and last time anybody bothers it, which is perhaps as it should be.

This is why I tramp through miles of undergrowth, duck fences and risk silly casts in lost corners. This is why so many of us do it, put up with the miles on the clock, the expense, the frustration. To remind ourselves that there are still wild places where nobody goes. To feel as if, successful or otherwise, you are the only sucker who exists for a few hours. As for the chalkstream, you can keep it. 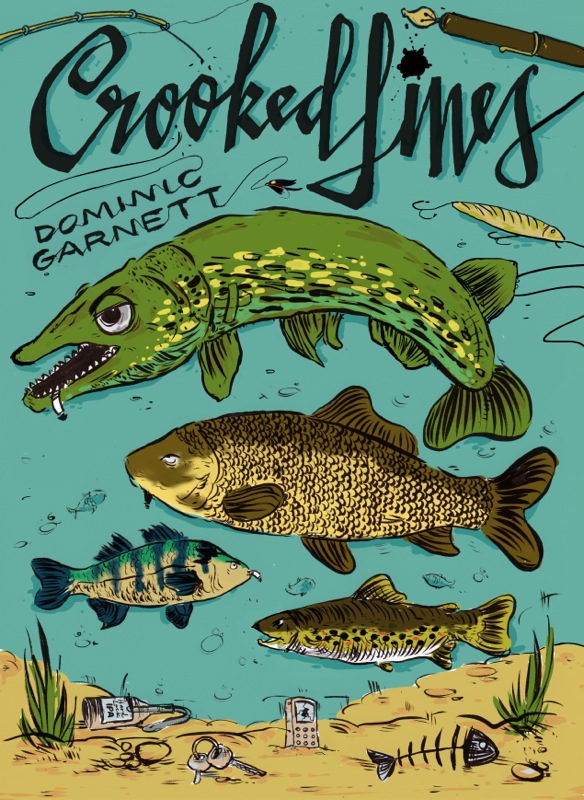 A Collection of Anarchic Angling Tales

What have England’s crappiest white van, the mother of all hangovers and a fly tyer born with twelve fingers got in common? All feature in Crooked Lines, a collection of wildly entertaining tales from Dominic Garnett. From the heights of Dartmoor to Central Park, Manhattan; through a barbed wire fence or even a hole in the ice, the lively stories and exclusive artwork of this anthology will delight anglers of all persuasions.

“Sharp, witty and bloody well written… has that rare gift to convey the magic of the sport.” –Angling Times

“Irreverent, quirky and fresh… Dom has a body of work that spans disciplines, species and countries, and the best of it is right here in this book.”
-Matt Hayes

Order your copy from www.dgfishing.co.uk
Also available as a Kindle Edition via www.amazon.co.uk