John Macrose shares his experiences with the bream of Queensland.

My nine weight had been my rod of choice in Queensland. I used it to explore the beaches and surrounding seas and rivers. However, a final surge by an angry tuna led to that rod being sent off for (a lengthy) repair. Forlorn and frustrated at the lack of fishing opportunities now open to me I looked at my five weight (trout) rod and wondered what use it might be to me. Since my arrival in Australia I had taken it upon myself to plug away at the Brisbane river (with the nine weight) to find out what lay within its sandy coloured waters. Locals reassured me that as well as the countless bull sharks there were a number of species for the fly fisher to tangle with. However, in my first eight months I spent many hours doing my best to show them how devoid of life the river actually was. 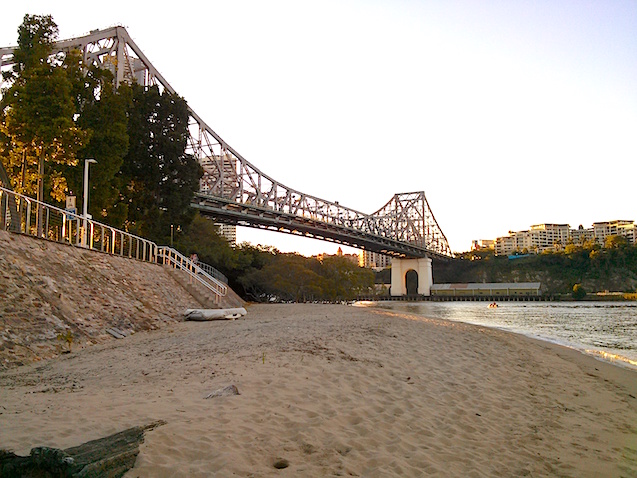 When it did come my first success on the river was quite a surprise to me. I was practising my casting with my nine weight (so despondent was I by that point, I did not call it fishing), when a dusky prehistoric object nonchalantly waddled up from within the brown soup and engulfed my fly almost at the rod tip! I had caught smaller versions on the coast, but I was very pleased to land the large flathead – even more so, as I was fishing next to a popular footpath and for once had several passers by to witness my catch. 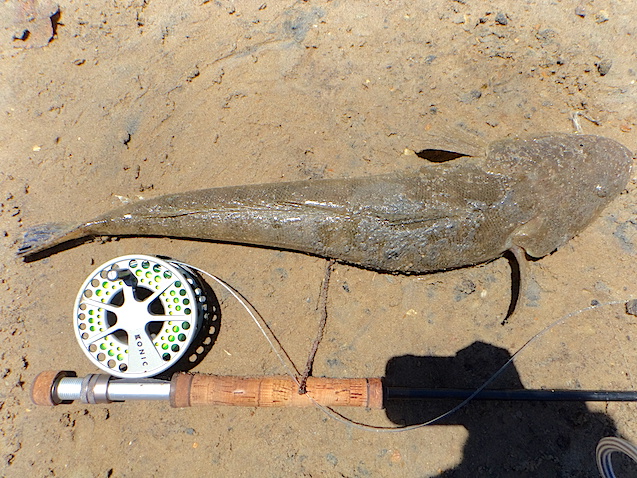 Anyway, around the time I was considering my limited five weight fishing options, my local fly fishing club announced that in a few months there would be a trip down to the Gold Coast to chase bream in the sea fed canals. The last – in fact only – time I’d been to the Gold Coast I had been fortunate enough to get a morning on the canals and had – thanks to some excellent advice from a fly fisher at a local store – managed to hook up a couple of bream with my nine weight on a size six crazy Charlie. Incidentally, this was also the day that I caught a mud crab on a clouser. While they are much prized for being good eatin’, this one was released to think about what it had just done.

Buoyed by memories of my (admittedly marginal) previous success with bream on the Gold Coast and with my options limited by the aforementioned equipment malfunction, I decided to focus my pre-trip efforts on bettering, if not perfecting, my skills catching bream on my five weight in the Brisbane river. My first task was to learn to pronounce its name of my quarry ‘properly’, or at least so that the locals and I were talking about the same fish. Bream, for an Aussie, is pronounced “brim”. Hence my terrible pun in the title of this piece…

With the club trip looming I set to work finding flies that would tempt these skittish silver Sparidae. A rummage on the web offered up the BMS (Bullen Mary Special), a fly popularly recommended for bream. It proved to be an excellent starting point for my experimentation.

Yet the BMS, developed for Lake Bullen Merri in Victoria, was not quite perfect for my needs. Over the coming months I developed and tweaked the original to adapt it to the particular environs of the Brisbane river. The first change I decided to make was to add some more weight. The Brisbane river is tidal and has quite a rip, so dumbbell eyes of various sizes were tried. This also turned the hook upwards (like a Clouser) helping to avoid the rocky snags lying in the murky depths. As with the original, I used red thread to build up a trigger point behind the eyes. I also took to using a wire wrap, rather than the traditional tinsel, to help secure the body and protect against the bream’s sharp teeth.

I experimented with various colours of the recommended SLF (synthetic living fibre), but in the end shrimp pink, tan, and – most successful of all – all white populated my fly box. I later read a piece by Muz Wilson on the Aussie fly fishing legend Peter Morse, which recommended a base of crystal chenille with a SLF dubbing to create a bait fish halo effect, which seemed to work very well. The final addition was perhaps the most important: bream seemed to like lures with lots of action, so I added a few small feathers of marabou to the tail. To this I also added a single ribbon of flash – any more flash seemed to repel rather than attract. Tied on size 4, 6 and 8 hooks I was ready for the trip south… 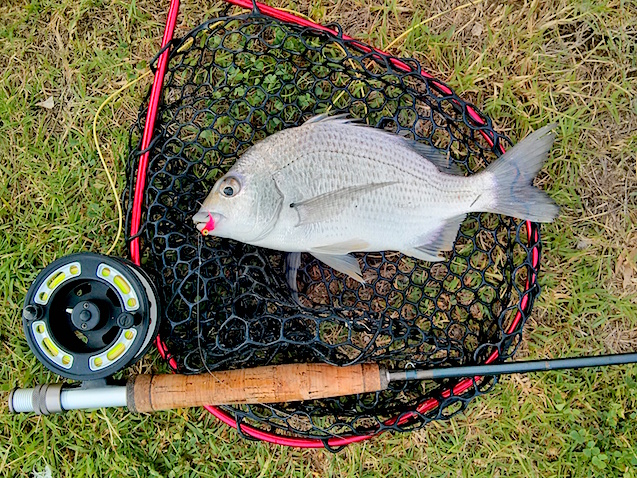 In terms of fish caught, the club bream trip was a bit of a non-event. Few hooked up and those bream that were boated were small. For me it was all about the ones that got away. While I brought a couple of small ones to the boat, I lost two good sized bream that would – by all accounts – have been eyed enviously. All came to the white BMS, Brisbane River Variant (the BRV?).

Which leads me to one last digression… You may notice that I have no photos of the trip. I did take many. But towards the end I experienced what some describe as ‘a brain fart’ and jumped into the canal to retrieve a fly snagged in some mangrove roots. That particular fly had caught all of the big bream and I wanted to use it as a template to tie more. Of course, as well as forgetting that the water might contain sting rays, sharks or some other aquatic nasty, I also forgot to take my phone out of my pocket beforehand. The exposure to saltwater was terminal for my phone – thankfully I survived. I didn’t get the fly back; in that moment it became the most expensive fly I (n)ever owned.

What all of the above amounts to is a steep learning curve (and not just about thinking before you leap!), which deepened my appreciation of what can be done with the fly and fly tying. I have only been fly fishing for five or six years, but in that time I had devoured countless articles in the fishing press, as well as spending hours reading books on various fly fishing techniques, visiting fishing blogs, exploring the wonderful world of YouTube fish porn, and chatting to fly fishing friends. What the humble Aussie bream and mighty Brisbane river allowed me to do was to put this knowledge into action and learn through doing. A new dimension of what it meant to match the hatch had opened up, with every fish caught leaving me brimming with delight. 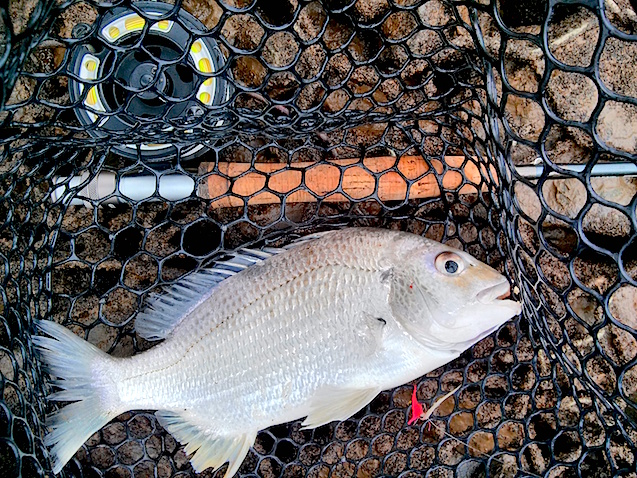 John MacRose is an amateur but enthusiastic fly fisher and fly tyer who is keen to (try and) catch any fish on the fly. After his Aussie adventures (see also ESF #27) he is now back in the UK.