Alexander Nelson packed his rods and was soon in Australia in search of hard fighting tuna. Read on:

My arrival in Hervey Bay, Queensland is heralded by the onset of the worst storm to hit NE Australia for many years. Not the most auspicious start to a trip, a year in the planning but I suppose some things are sent to challenge us. 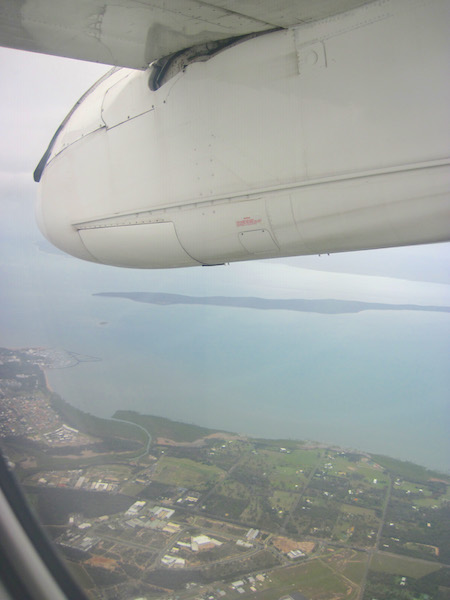 Arriving at the digs I’m sharing with Cpt.Gavin Platz , my guide for the next four days, I’m greeted by an ageing surfer dude with skin like leather but a smile to make you  feel right at home. It seems this weather is set to stay for a few days, as it turned out, it stayed for a few weeks and caused total havoc.

The next morning we head down to launch the boat, the sky is forbidding but Gavin is upbeat as he knows the Longtail and Mac Tuna have moved into the bay, so at least we should be able to find something to cast at. The rods had been strung back at the house and the flies, Polar Candies, I’ve spent weeks perfecting and tying in a variety of colours, met with the approval of the guide and had been tied on, steel grey to match the bay anchovies.

So begins my education, it’s birds we are looking for as the tuna push the bait fish around the bay, the terns are the best way to locate potential targets.

The first small school we spot is under no more than half a dozen birds, in the vast expanse of the bay this could be a lot harder than I thought.

Cast, strip, strip, strip and cast again, sets the pace for the rest of the week, I get four shots into the school before they evaporate, but it is long enough to hook into a 2kg Watson's leaping bonito, one of nine species of tuna that you can find in the bay and a very pretty fish.

The fish took on the first cast, fought like a demon and was slipped back without a photo. A pity really as that was it, we never saw another for the rest of the trip. The day passed quickly and the weather got increasingly challenging with the wind rising after lunch to about 25 knots. 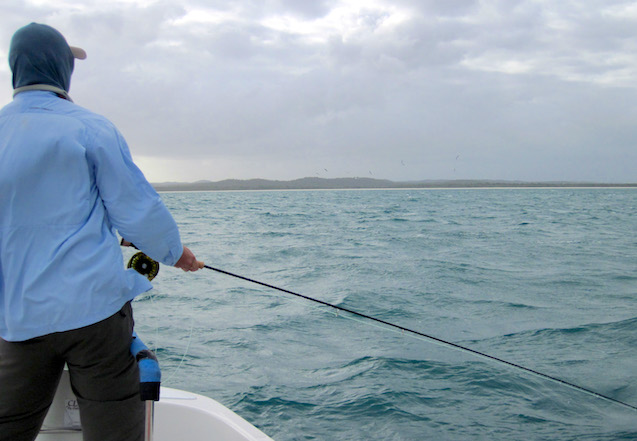 We found four other small pods of fish. These were bigger tuna, the longtails and macks we were looking for, some of which were pushing 15kgs.The wind was making boat positioning a real issue for Gavin but he kept getting me shots, I think I got four good solid chances. A tailing loop ruined the first and a knot the second, the other two made it onto the water but to no avail. Sometimes the fish don’t appreciate the effort involved in a 70ft cast into the teeth of 25 kts of wind.

5am next morning sees us on fairly calm water although the sky is dark and it’s only a matter of time before the weather breaks. It takes an hour of hunting until we spot a small group of birds but there are fish here. Suddenly they are coming off the front of the boat, they are so fast it distracts me and I fluff the cast again and miss the shot. Gavin re-positions the boat and for the second day running my second shot is ruined by a knot in the running line, now I take up the guide’s offer of a bucket. Stubbornness is not conducive to good fishing. My third shot is at a fish I can see on the surface, it is heading towards the boat like a torpedo and I over shoot the fish, one strip and suddenly I’m attached to his wingman, he keeps going at 25 kts and for the first time in my life I genuinely see the backing on a fly reel. This is a 9wt outfit with the drag cranked up yet I still have 75m of Dacron to get back as the fish turns and runs. Everything happens so fast and with such power it is better than any so called adrenaline ride at Disneyland. 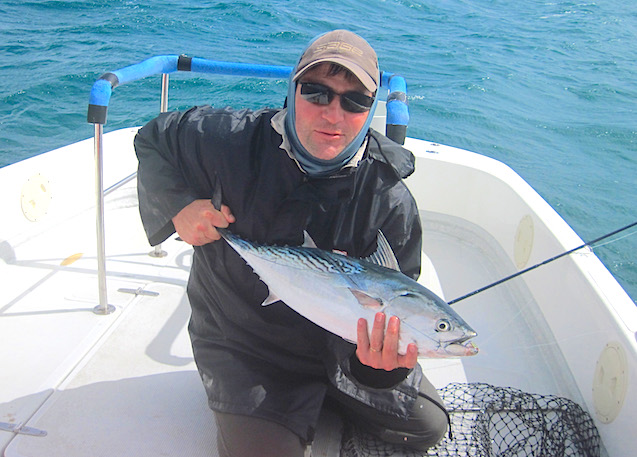 10 minutes of gladiatorial combat and we net my first 5kg mack tuna. Photos this time, the barbless fly is slipped out and the fish is launched back to the water like a vertical depth charge, dropped under its own weight, head first and it's gone.

What a rush, this is fly fishing like I have never imagined. I need another hit. The fish are hard to find but the school re-appears more than a mile away so we are on the chase. Gavin keeps repeating the mantra “trust the birds” as he gets us into a spot just ahead of a small flock of terns, no sign of the fish but I get the fly out right under the point of the flock, strip, strip and a surge from the wave as ‘jaws’ smash down on the fly and the battle commences. This fish is a little bit bigger at 5.5 kg but otherwise an equally beautiful chrome plated mack tuna. My final fish for the day comes amidst some mirth from my guide. While he is focused on positioning the boat I spot a straggler cruising along the side of the boat, no more than 30ft away.  I flick the fly towards his nose and he’s on it in a flash, this time the years of sight fishing for trout take over and I strike, pulling the fly straight out of his mouth. Before Gavin even starts laughing the fly is back in the water and the fish is on and is much stronger this it takes 15 minutes and two very tired, sore arms later before I release a lean mean fighting machine of 5 kgs back to his watery arena. 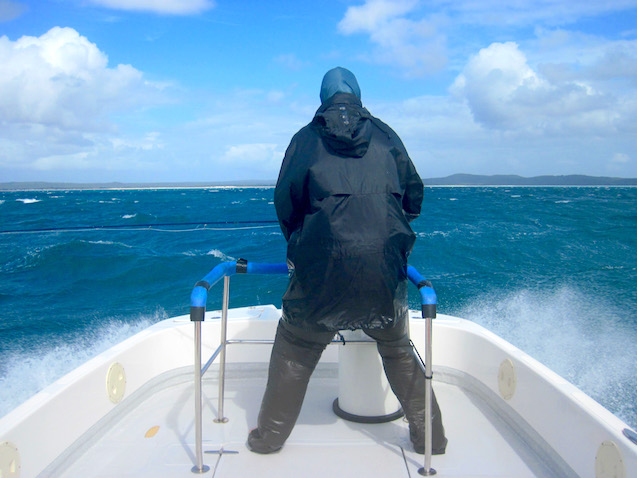 The weather has turned so we head home, reflecting on what has been the best fishing experience of my life so far. I look forward to the fantastic steak dinner and glass of Merlot that awaits.

The third morning is a disaster and we are blown off the water after a few hours.

What fishing we did manage was done over the shallow flats of Fraser Island looking for golden trevally, a fish that is to Queensland as the Bonefish is to Cuba. I never saw one. We did see stingray, small whitetip sharks, a striped sea snake and a couple of sea turtles. Hervey Bay is a mecca for all sorts of wildlife. 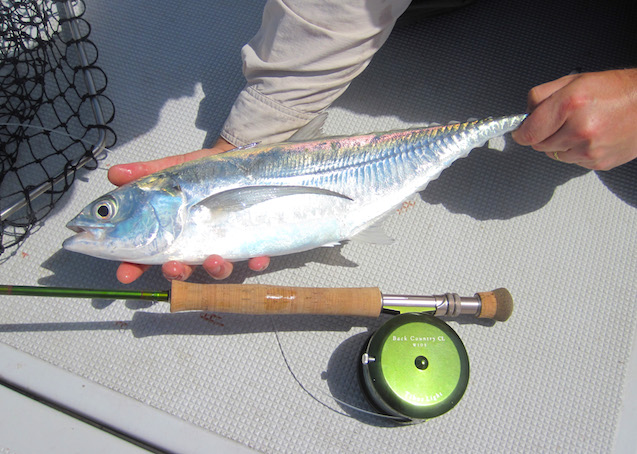 Dinner that evening was to be interesting. Gavin invited a couple of friends who were surviving the global downturn by running an adult entertainment shop. My apprehensions about how the conversation might go were unfounded as they were more interested in the fishing. The seafood was good that night, mildly ironic given the day we had, but a welcome end to a frustrating day. Unfortunately the following day's forecast is no better.

The final day of fishing in Hervey Bay dawns with us already out on the water. We travel over an hour and a half up the edge of Fraser Island without a sign of any fish. As we begin to get a little disillusioned, a couple of birds fly past us. These guys are stormy petrels and are often seen over the water whether there are fish or not. With nothing better to go on, we follow them. Pretty soon the flock grows to hundreds of birds and we can see small fish under the surface. I start with the 7wt outfit and a small version of the candy, casting into the birds and stripping it back. 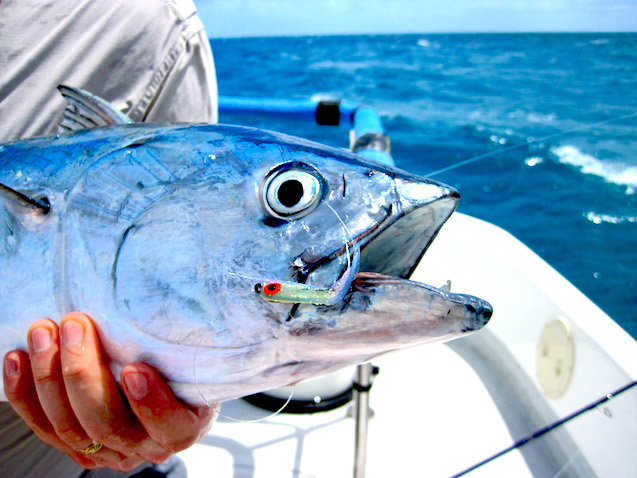 Several very pretty fish called finny scad succumb to the fly before they start to visibly shy away from it. Even in the sea, fish can get spooked and you may have to do a better job of “matching the hatch”. The baitfish the scad are chasing are very small and tan in colour so a size 2, slim tied tan/white clouser accounts for another half dozen fish before the birds settle on the water.

We sit in the boat, a Mexican stand off in the middle of the Bay. After what seems like an age, the birds all lift off the water together, so I stand, cast and bang, one last scad attaches itself to my fly and I get to bend the 7wt under the boat again.

The wind began to get hairy come lunchtime with the gusts approaching 30 kts, so with discretion being the better part of valour we decide to head back to the launch, two hours away! 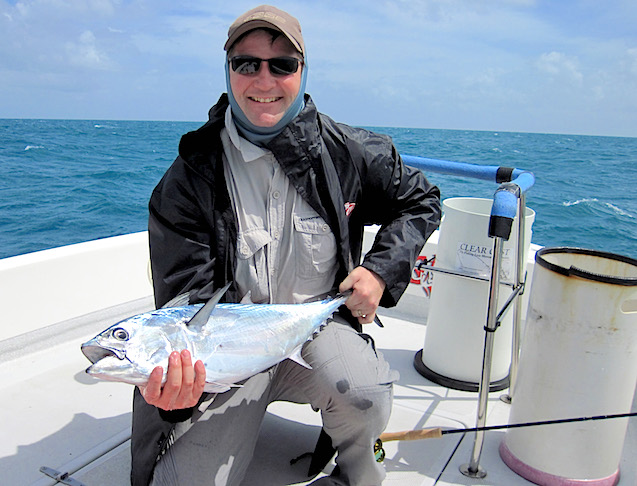 On the way we spot a very small group of birds dive-bombing the water on the horizon. What the hell, we go for one last chance at a tuna before I have to leave. Now this is madness, standing in the front of the boat with the waves breaking over my head as the boat gets into position, fly rod in hand, line in the bucket, fly set for launch. Time to trust the birds. I get the shot, 60ft into the teeth of 30 kts of wind, quite how, I’m not sure, but within 15 seconds I’m attached to 5kgs of pure adrenaline. With the boat pitching and rain lashing from all sides, we net my last mack tuna, the first fish I truly feel I have ever deserved to catch.

What a way to end the week, as I launch the torpedo back to the turbulent ocean, my trip has come to its explosive finale. I sit back and let Gavin take me home, a crazy four days in almost impossible conditions, what better way to complete the trip of a lifetime?