John Zimmer takes us to Ohio where he shares an eventful day on the river.

A couple times a year my wife and I make the two hour drive to Mohican State Park in Loudonville, Ohio. I like to fish the Clear Fork, and my wife brings her camera to capture the scenery and wildlife. In early June we decided to make the trip and little did we know how unusual the day was going to be. First, the fishing part of the trip.


Each fall in October, the Ohio Department of Natural Resources stock the Clear Fork with brown trout. The best time to fish it is either the fall or the spring, before the water warms too much, and stresses the fish. Mad River Outfitters gives periodic updates for the Clear Fork and they have reported that fishermen are having success in the lower Clear Fork that flows through the state park. 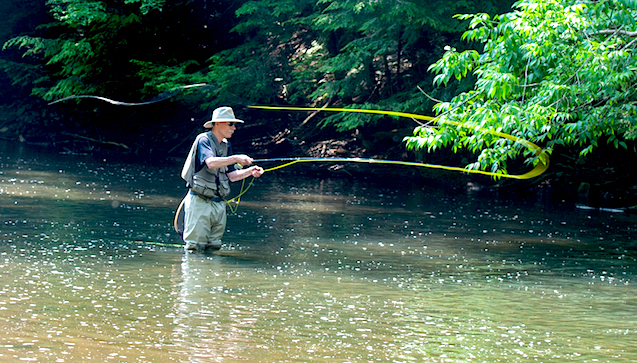 I hit the water around 7:30am and started at the covered bridge. I tied on a dry-dropper, using a Parachute Adams with a Copper John dropper. The water visibility was good but there was little bug activity. The Adams was doing double duty as a dry fly and an indicator. As expected, the Adams didn’t have any action but the Copper John attracted a couple of sunfish. That’s okay with me but I was there to catch a brown trout as I had never caught one before. So I made the decision to move closer to the dam. That’s when things got interesting.

Making the half mile walk towards the dam I noticed some rises and few splashes. Maybe the Adams was going to get some action after all. Even the swallows were swooping in and picking bugs off. The problem I was having was in identifying what the fish and birds were going after. I waded into a run and continued using the Adams but after 15 minutes without any action I gave up on the dry-dropper. 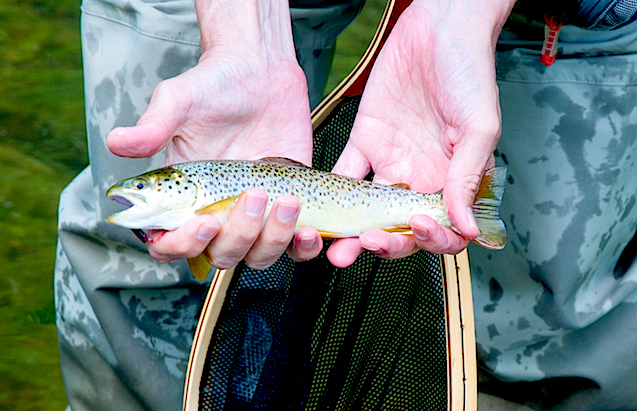 Slightly frustrated I put on a small woolly bugger to see if I could fool something. Three casts in and I had a solid take but missed the hookset. As this was going on I was seeing rises and splashes all around. Next thing I know a voice in my head says “try a midge imitation”. So I ditched the woolly bugger for a Griffith’s Gnat, and found the pot of gold on the second cast.

Facing upstream I targeted the bubble line with about a 30’ cast. The first cast drifted back to me untouched. The second cast drifted about 10’ when something attacked it. I raised for the hookset and the rod broke. So here I am, midstream, holding a rod that no longer has the tip. Thinking the fish was lost, I reached for the broken piece and began to retrieve the line by hand. Pulling a few feet of line into my hand I noticed a tug. Unbelievably, the fish was still on the hook. I hand-retrieved a few more feet and realized it was a brown trout. Seconds later, I literally brought my first brown trout to hand. As for the rod, it is fully covered by Orvis, so I don’t have to worry about it. Fortunately I had a backup rod in the car and was able to continue fishing. 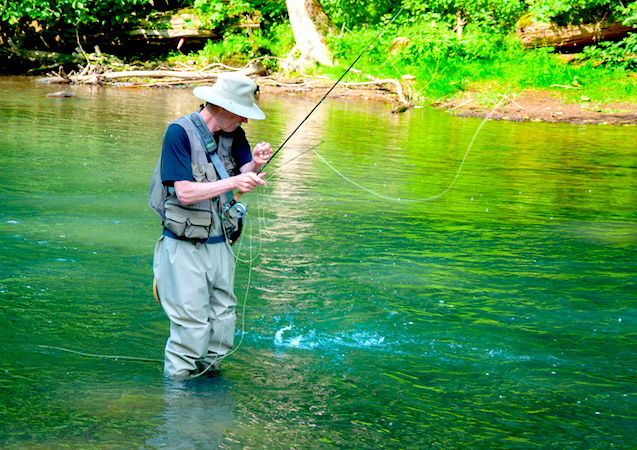 Now for the real highlight of the day. As I mentioned earlier my wife loves photography and has captured some great scenes. On this particular trip she also found a pot of gold. While taking pictures of the stream she noticed something moving over the rocks. It was something we had never seen before. It was small, sleek, and chocolate brown in color. Our first thought was it may be a weasel but after some research we realized it was an American Mink, which is in the weasel family. The unusual part was a mink is generally nocturnal. My wife took the photo mid-morning, so the mink must have had a late night and was heading to its den, which often times is near a stream. From the photo below it looks as though the mink stopped and posed for the picture. 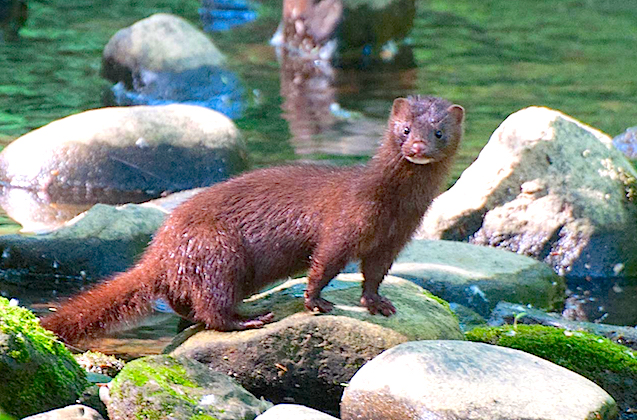 Go out and fool a fish!