Toby Coe takes us off to Iceland and the trout that swim in the River Minni-Vallalaekur.

The trout was massive. Even looking down through 15 feet of water, its bulk was obvious. Huge fins flared out like hydrofoils, it seemed to just hang there, as if frozen into the fabric of the river, its back slipping and sliding through the broken light.

We tried to guess its size. Ten? Twelve? Fourteen pounds? Futile attempts to guess the number of sweets in a jar. We left the fish alone at the bottom of the pool and moved on, looking for a bronze snout breaking through the surface of the stream. The wind pushed over the vast flatness of the landscape and we saw only the odd insect floating downstream. Finally, tucked under a high sheltered bank, broad shoulders hunkered up from the bottom and a pair of jaws clomped onto the hapless forms trapped overhead. 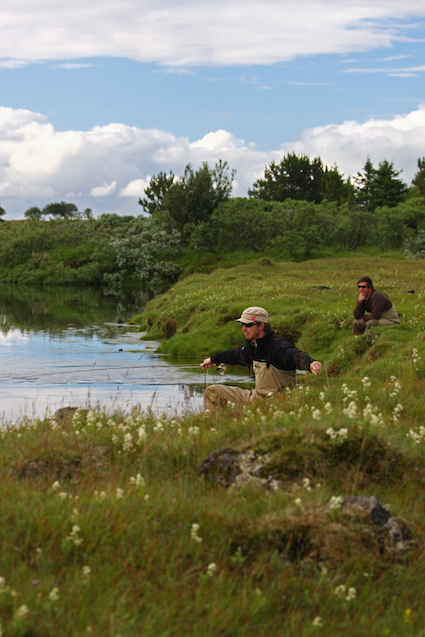 Hands shaking, my fishing partner crept down into position, while I kept a lookout from high over the still rising fish. On the third cast the fish tipped up in slow motion, engulfed the small black gnat and all hell let loose. Five minutes later, we were slipping a brown trout of over 5lb back into the clear waters.

A mecca for big browns

What is it about big brown trout? I know numerous anglers, from several countries, who border on the obsessive if you get them onto the subject. And yet I still cannot quite put my finger on why they get under people’s skin so much more, than say, big rainbows. People travel to the other side of the world for them and spend years, lifetimes even, in their pursuit. Discussions with some of the obsessed have lead to musings on their status as the original trout; that for which flyfishing (at least in popular history) was invented. Fooling one with a fly sits at the pinnacle of achievements in an angling career and the path to doing so has no guarantees. 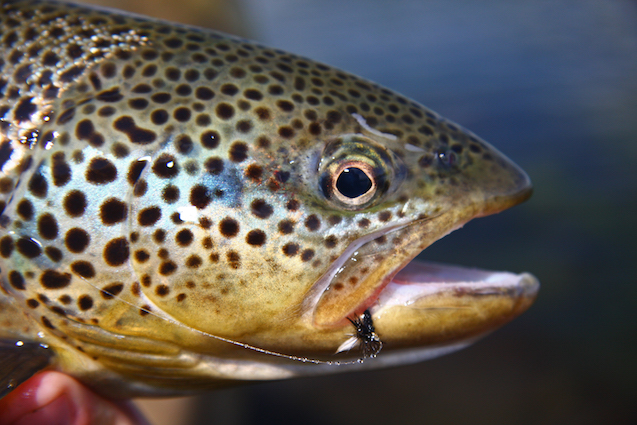 And so, a few summers ago, I made my way north to Iceland, on the promises from a friend of a river containing true leviathans. The Minni-Vallalaekur, upon first appearances, is deceiving. Winding slowly through a flat hinterland of wind-blasted grass and black lava outcrops it seems wholly unremarkable. But look into its waters and the deception is thinly veiled. A spring fed river system, its waters are float-glass clear and the black volcanic sand and sludge on the river bed are the perfect habitat for, amongst other things, huge densities of chironomid larvae. 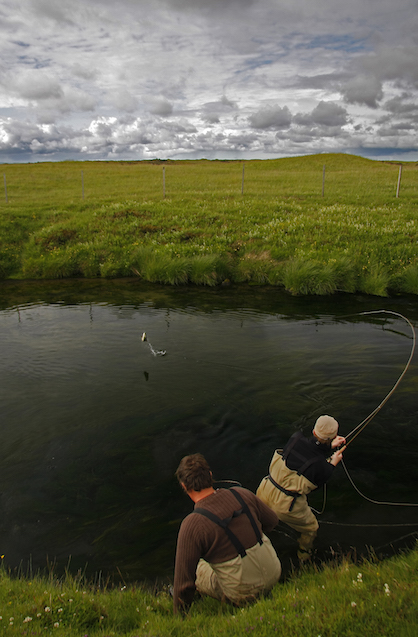 When conditions are right, these populations of larvae emerge as prodigious hatches of black midges. And on these the Minni’s other reputation is founded – dry fly fishing for those outrageously sized brown trout. The log book for the season before I was there included the capture of a brownie in excess of 16lb on a size 16 dry fly. There are precious few places in the world where such a feat is possible.

Our trip to the Minni was timed for mid-summer, to maximise our chances of seeing these hatches of midges, which are most prevalent in calm, warm conditions; something that does not occur with regularity on the exposed steppe of southern Iceland. This was born out during our trip. Occasional periods of balmy high-summer conditions were interspersed by savage storms and on one memorable afternoon a wall of grey swept across the plain towards us with two small tornados leading the way, like a gateway into the heart of the storm. 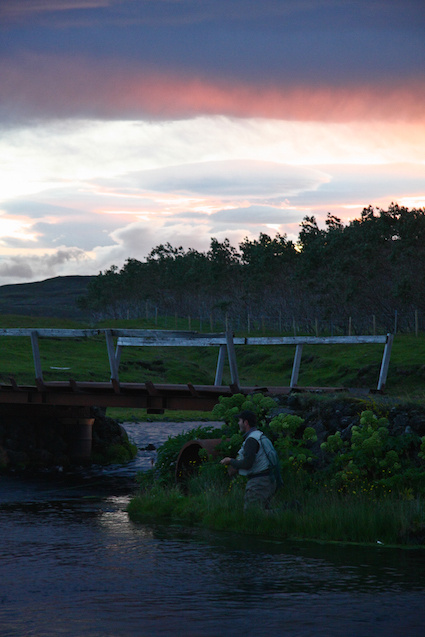 The spells of calm lived up to expectations. Fish that were previously hunkering deep down in pools would suddenly appear at the surface, greedily slurping down the insects drifting over their heads. Myself and big trout guru Paul Proctor had one entertaining morning casting at fish feeding in the complex currents in a braided section of river. For what seemed an age, we crouched and watched three fish feeding in the confluence between two flows. Chancing a cast at the closest fish, I prayed the fly-line would not reveal our presence. My luck held and a pepper-speckled Icelandic trout launched itself across the surface of the pool. While only a relative welter-weight of just over 3lb, it put up a formidable scrap and soaked me with a flick from its tail as we slipped it back.

With conditions looking good, we scuttled downriver to see if one of the previously sighted giants had decided to join in the fray. Arriving at one of the pools we had noted, we crept up from downstream to see a good fish consistently pushing water at the head of the pool. An indeterminate period of time later and the water surface was again rent by a massive bronze back. This was the sight every flyfisherman hopes to see.

I lined up the first cast and it flew true. The leader unrolled and the fly drifted out, to be met with a singular nothingness. Not even a push of water beneath. Recouping, I prepared for another cast. Much to our dismay however, someone, somewhere had other plans. It is amazing how quickly trout disappear on a stream when a whooper swan with a broken wing cripple-strokes across the water surface, its squawks of indignation ringing out for all to hear. 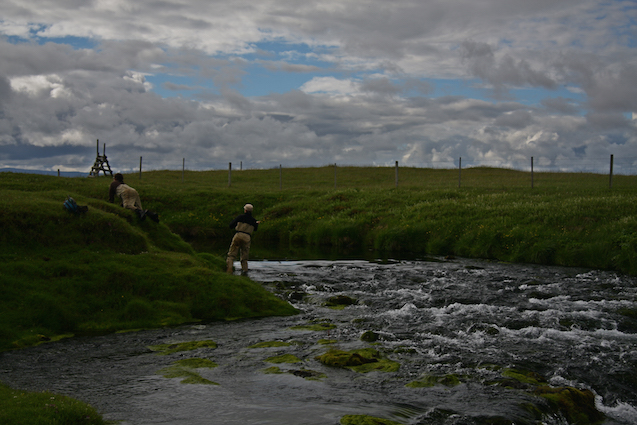 As if to placate our dismay at this unlucky turn of events, the next morning the weather presented us with a spectacle of the Minni at its very best. Balmy weather resulted in a biblical hatch of midges. The surface of the river was blanketed with them and there were fish rising everywhere. It should have been easy; a gift from the fishing powers that be. But it was, instead, maddeningly frustrating.

Such was the density of insects on the water that absolute pinpoint accuracy was paramount. As soon as a fish rose, a cast had to be made that placed the fly immediately upstream, within inches of the rise. Even fractionally off target and the fish didn’t respond. They might as well have not even been there. Despite this game of sight-cast-and-swear, we still managed to winkle out a couple of smaller fish. One fish in particular resulted in a memorable over-reaction from the most enthusiastic member of our party. The resultant fighting pose was one more typically seen on the decks of a tarpon skiff than the banks of a trout stream. 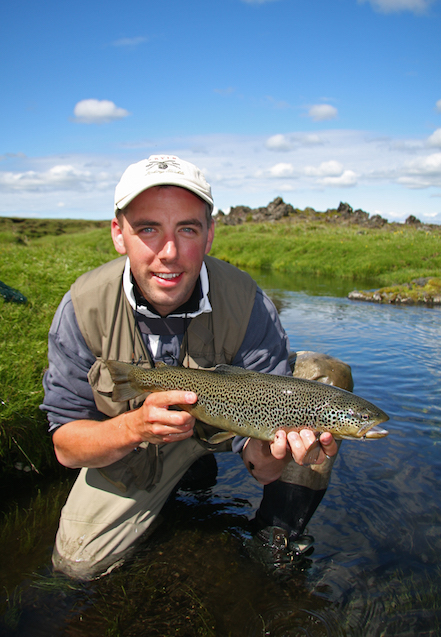 A real monster still eluded us. In our final hour on the river, we spent many exasperating casts trying to cover a trout that had drifted up from its slumber in a deep pool. It didn’t rise so much as slurp the surface down with it. But every offering was refused, one cast aside where a slurp over the fly was met with a strike into thin air.

While the huge, visible hatches are the predictable basis for the Minni’s fame, the experience that fixed itself into my memory is not something that you see captured in many pictures. In high summer, the glow of the half-light never leaves the celestial blanket overhead. So, pushing the boundary one evening, I fished well into the stillness of the midnight light. It is a becalming experience to stand in the midst of a stream at 3am, casting at rises nudging the inky smear of the water surface; the ethereal drumming of snipe echoing overhead. 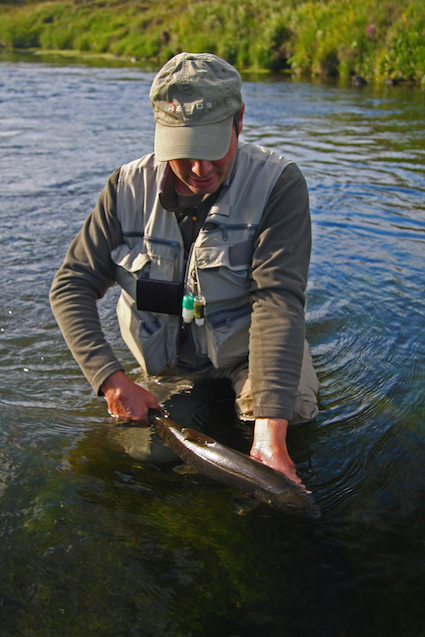 We talk about the captures past and the captures we hope to secure, but it is the small, otherwise unremarkable moments that imprint themselves into the mental photograph album of our lives. In the dusky stillness of a noncircadian stream, the swish of a fly-line loop seemed to fall heavily. My fly drifted towards me, a tiny smudge on a sheet of black glass. A bulge and a swirl and it was gone. A momentary weight on the end of a gossamer thread until that, too, was but a series of connections in the neural network of that most personal of albums.

Toby is a talented writer, photographer, fisherman and friend. He has an excellent website where you can see more of his work.