Stuart Minnikin heads to Northern Spain in search of trout. Did he find them?

My mate Paul had been talking about the two of us fishing in Spain for a number of years. He was attracted not just to the trout fishing but, being a lover of the finer things in life, the food and wine. If I'm honest Spain had never been on my fishing radar - I didn't think it even had trout! But then I suppose if you've only ever been to the Costa Brava and Benidorm you would form that opinion! 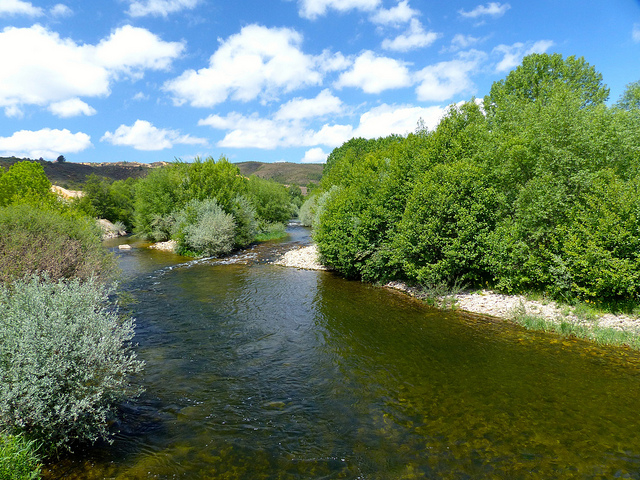 Paul was keen on us visiting Galicia, on Spain's north western tip, north of and bordering Portugal. After a few years of carefully and diligently collecting the required brownie points he had finally built up enough to redeem them in 2014 and our trip was duly (if a little loosely) planned over too many beers in the city centre pubs of Leeds. Using Phil Pembroke's little guide book, "Flyfishing in Galicia", we both studied the fishing opportunities and came to the same conclusion: the fishing was, at best, distinctly average, verging on crap! Galicia is bordered by the regions of Asturias and, Castile and León, both of which have trout fishing opportunities and both have guide books written by that man Phil Pembroke again. After hurriedly reading both books we (I) decided against Asturias on the grounds that it was dominated by salmon and salmon anglers, and trout day tickets were about as scarce as hen's teeth. And we (Paul) also favoured León because it offered far better food and wine opportunities! 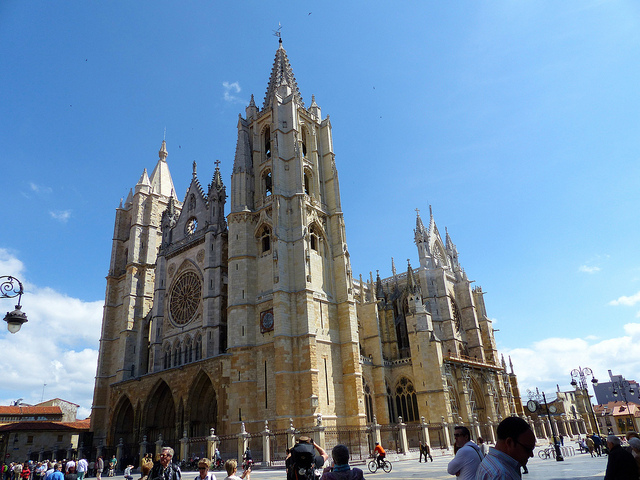 The drive from the airport at Oviedo over the mountains to Leon on the AP66 toll road was amazing, driving through high mountain passes and tunnels, past lakes and tumbling streams, spotting eagles and kites, our excitement grew ever stronger as we descended towards the city of León. Of course our first night was an unhealthy mix of beer, red wine and tapas around the city centre bars and restaurants (as it was every night)! This meant the mornings were slow, groggy affairs, fighting hangovers with copious amounts of Spanish coffee, tortilla and pastries. Not the crack of dawn stuff usually associated with fishing trips, but there was method in our madness - León sits at 837m (2,746ft) above sea level, meaning cold nights and mornings, even in June, until the warmth of the sun works its magic. There really was no need or point getting to the river much before lunch until the sun had warmed the air and water, the invertebrates became active and trout began to respond (well that's our story and we're sticking to it!). 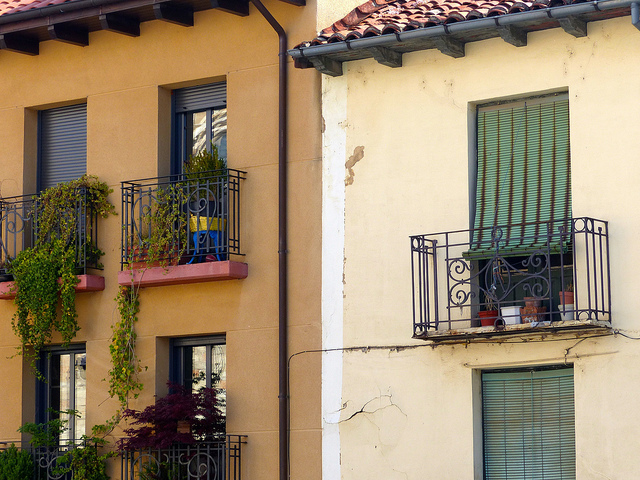 Our first morning in León was spent trudging the streets looking for a tackle shop run by Jose Cenador and the Medio de Ambiente, (basically the Spanish version of our EA) where we needed to purchase our rod licences. Jose runs a great tackle shop in León and is a mine of information on the fishing opportunities in the region. He helped us greatly on that first morning and he was selfless with his advice about where to fish and where to obtain the necessary regional rod licence, ignoring paying local customers to help two babbling Englishmen. I can honestly say that without his help we probably wouldn't have been able to fish at all that week - if you ever read this Jose, thank you again! 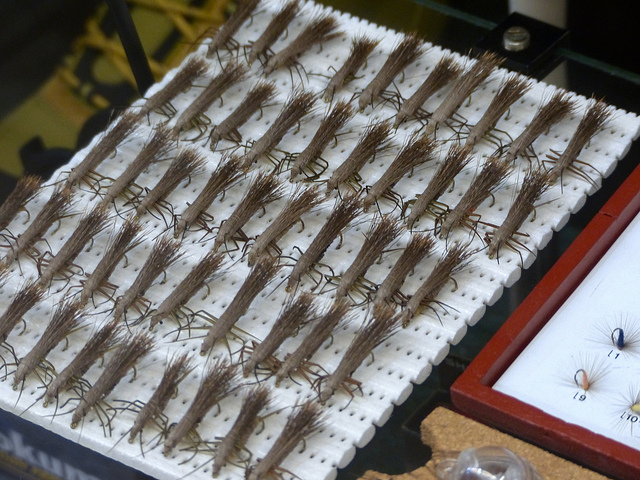 Jose had explained to us that there is no way for a visiting angler to buy a day ticket in León (they are all sold off in a ballot system (sorteo) in the preceding autumn) and the only way for us to find some fishing would be to fish the free fishing stretches. This brings to mind images of overfished water, lack of fish, fighting other anglers for space, short stretches of river that no-one wants to fish, etc. The reality is far more appealing! It would appear that the majority of Spanish anglers want to take fish for the table and only want to use spinners. The free fishing stretches are fly only and C&R, and they have been expanded over the last few years to cover many miles of river. Fishing on these free stretches is now allowed seven days a week, as opposed to six days a weeks before the free fishing was expanded and C&R made mandatory. Jose highlighted the rivers and stretches that he recommended on my map and after buying a few of his local nymphs we were on our way. 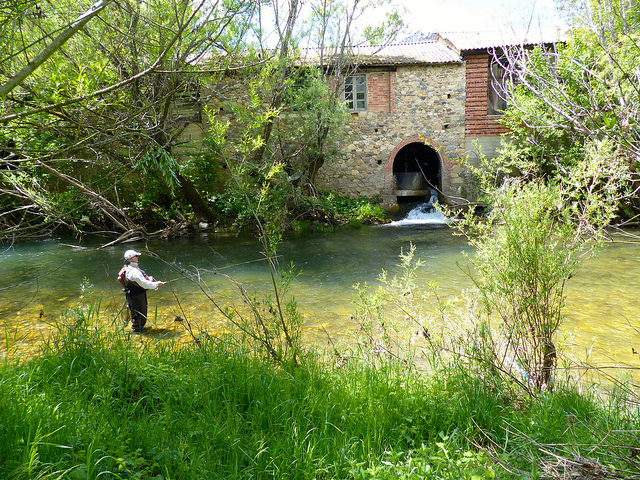 There are many rivers that flow from the surrounding mountains towards and around León. A 30 minute drive up most of the river valleys takes you to one of the free stretches where you can just park and fish. Navigating in and out of León would be an absolute nightmare without sat nav, but once on the open road it was straightforward enough. The scenery was quite exhilarating with distant views across the plains to snow topped mountains stretching out in every direction, pretty Spanish villages with resident storks, traditional farming practices and quick glimpses of the river raising your excitement!
We fished the Rio Torio, Rio Omañas, Rio Curueño and Rio Bernesga, all beautiful, but quite different in character. Every river though had the most amazing fly life I have ever seen. It's a bit of a cliche, but they were literally crawling with bugs, dominated by large stoneflies. Every stone was either littered with their shucks or had hatched adults crawling around them. Upwings were prolific too, especially one much like our Large Brook Dun and we saw good numbers of sedges. Sitting on the bank had you covered in these flies in seconds. The large stoneflies were very interesting. We saw them crawling on the bank, skittering across the surface and flying, looking like some prehistoric fly out of Jurassic Park. I only saw one trout try to take one, though it missed it, however, they must be taken because we saw row after row of deer hair imitations in another tackle shop in the centre of  León. 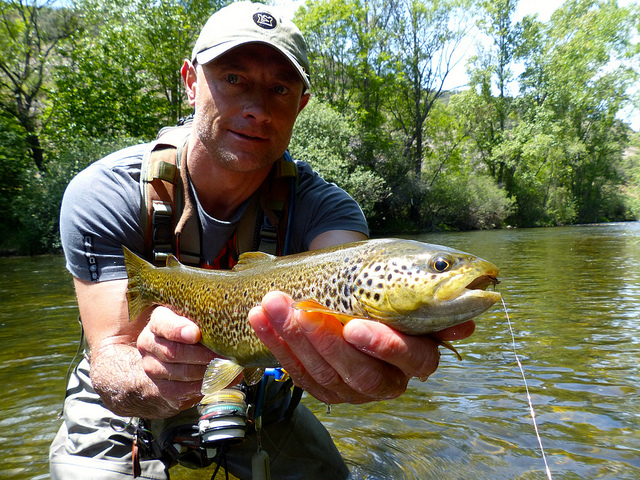 We got the distinct impression that the Rio Torio was considered the best river in the area. This wasn't our experience, in fact we struggled to catch a single trout despite fishing some very nice looking water over two days. On our second visit I worked very hard for four fish and we decided not to return.

The Rio Bernesga flows through the centre of León and did look slightly appealing, though, we figured it was full of coarse fish rather than trout. Jose had told us about a free stretch of the Bernesga upstream of the city. It was quite a difficult climb down to the river and the wading was perilous to say the least, so Paul decided to look on from the road above and take photos while I fished a short session. I alternated fishing upstream dry on my Hardy Zenith and nymphs on my Tenkara Centre UK 12' Hayase. Despite covering a fish that rose and nymphing through some very nice looking pools I failed to find trout in the Rio Bernesga. I doubt I'd return for a number of reasons but I'm sure it would give good fishing on the right day. 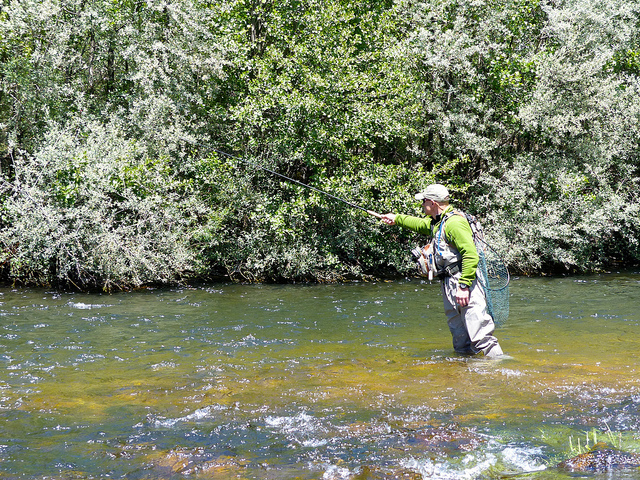 Our favourite rivers were the Omañas and Curueño. The Rio Curueño probably offered the better fishing but Rio Omañas beat it for scenes appeal. Most of the driving we did in Spain was a pleasure, using quiet roads through magnificent scenery, but the drive to Las Omañas topped it all, taking us over mountains and through valleys with constantly changing distant views to snow capped mountains. The river was wide, crystal clear and beautiful. You felt that you were fishing at high altitude. It contained a good head of mostly small trout, but Paul had a few in one pool to just under 2lb and I spooked a couple of trout that were lying under my bank that would have gone over 2lb! 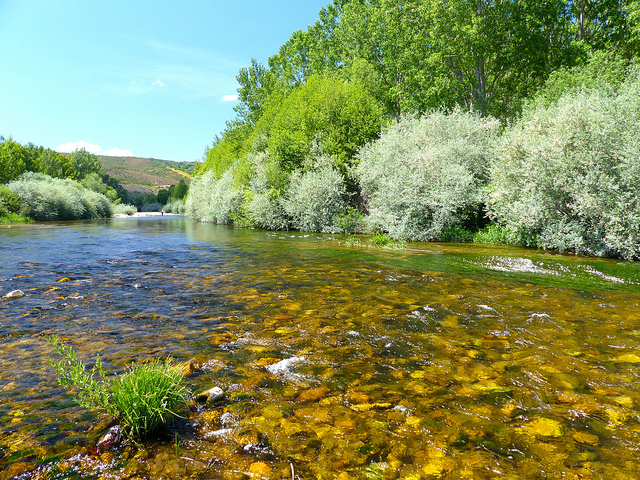 We found by far the best fishing on the Rio Curueño. In fact it gave me my first Spanish trout on our second day from under an overhanging branch on a CDC and Elk Sedge. It came after a fruitless first day on the Rio Torio and fruitless morning on the Bernesga, just as I was starting to doubt that Spain did actually have trout after all! This was the first of many on that memorable afternoon. After releasing that trout I spent the rest of the afternoon casting to rising trout that were feasting on all manner of flies coming down the river in light rain - a great day! Paul didn't fair so well. Not through any lack of angling skill I might add. He went off downstream to fish but came across a sign that read "Coto Privado". Coto meaning "reserve" he took this to mean he strayed into a private fishing reserve and didn't fish. We later found out that this was a private hunting reserve and not a private fishing reserve which read "Coto de Pesca". 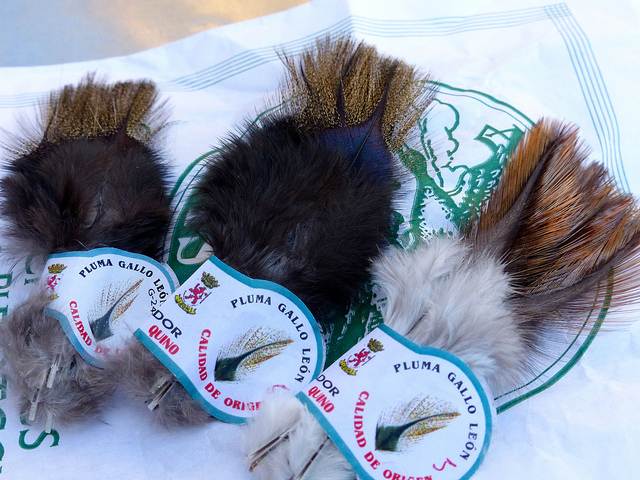 We enjoyed fishing the Rio Curueño so much that we decided to spend our last day there. We swapped places and I fished the Coto Privado section. I had a superb last day with a few good fish all to my CDC and Elk Sedge, rounded off with my best fish of the trip - a 1lb 10oz beauty that fought and scrapped as good as any trout size for size I've ever caught. Paul had a far better day second time around fishing where I'd done so well a few days earlier, including water upstream that I didn't get to. The Rio Curueño will be our first port of call if and when we return. 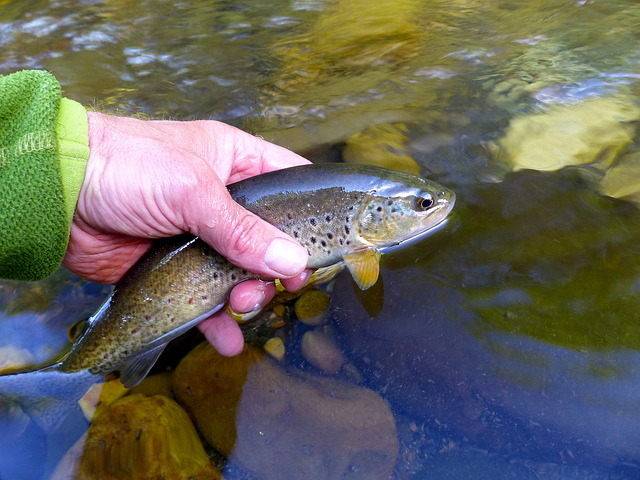 If ever there was a good base for a fly fishing holiday for those who enjoy a contrasting mix of sophisticated nightlife, city life, history, scenery and good (but not exceptional) fishing, then León must be it. I have fished many places the world over, including Chile, Bahamas, Mexico and throughout Europe but this was possibly the best fishing trip I have ever done, not because of the fishing alone, but fishing combined with friendship, city break, scenery, food and drink, etc.

Stuart Minnikin is a fly fishing guide based in Yorkshire. Click this link to visit his website