Steven Murgatroyd is back in ESF with a piece that I am sure will resonate with many of us.

Just one more ‘last cast’.... This one really will be the last; I wait and watch. There - a rise! I freeze, willing the fish to betray its presence again. I realise that I am holding my breath in my attempt to conceal myself, but just as living its life inevitably reveals the whereabouts of the fish, I know that I cannot deny the adrenalin now  coursing through my body, from my heart to my fingertips; the rhythmic pulsing of the rod tip telegraphing my position to the surrounding world.

I stare into the glare of the water’s surface searching for a sign; just one more cast. I should have been back over an hour ago but here is a chance to save the day. A chance to score...

The world closes in around me. Nothing exists outside of the egocentric bubble I have created. It is just me and the trout. All my senses are tuned in to pinpointing the lie of the fish. I know that I will have only one shot at this. I slowly remove the fly from the keeper ring and blow on it. There! The fish rises again...and again! I carefully draw line from the reel; aerialise what I judge to be just enough, and let the cast go. Time stands still. Just let me hook this one fish, please; then I’ll go, just one fish, that’s all I want, that’s all I need, please! 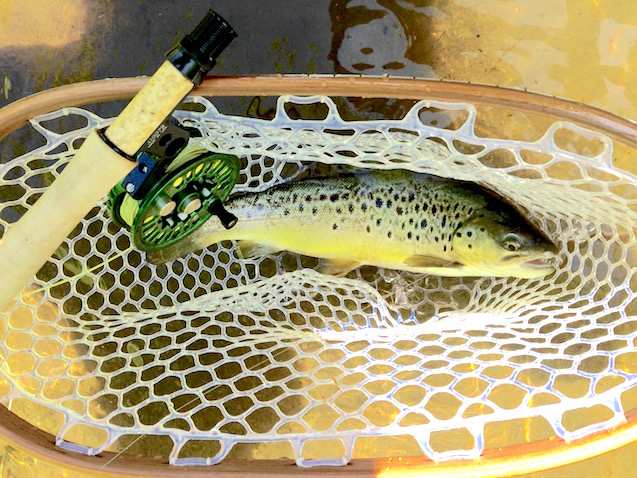 The need, no, the craving to feed this addiction began when I was at school. The river Clwyd was a short bike ride or a long walk away from home, and for a few years, I would fish two or three days a week after school. If a week went by without me catching a trout then I believed that I was losing my touch –  that I could not call myself a fisherman. An obsession, everybody assumed, that I would surely grow out of. No one suspecting for one moment that this was an obsession that would grow insidiously into an addiction.

The fly gently alights on the water’s surface about twelve inches upstream of the trout’s last rise. My world has slowed to a series of silent, stuttering freeze frames as the fly inches its way towards the trout. Breathing is again involuntarily suspended as an incontrollable trembling telegraphs my anxiety down the line and into the river. Please, please, take, I promise I will let you go and then pack up – I promise!

The outcome I know, in my heart of hearts, is academic. Like all addicts I will return again and again, making the same promises, saying the same selfish prayers and never really wanting to be free of my obsession.