Nick Thomas comes up with yet another pattern that is well thought out and totally fit for purpose.

Most nymphs we fish have round bodies. That's the nature of fly tying; you wrap something, dubbing, organza, wire or whatever, around a hook and you get a round body. You can taper it to more closely match a natural nymph, but it's still going to be round. That's fine and dandy for many imitations of fish food; for caddis and midge pupae a round tapered body is pretty much just what you want. However the nymphs of many up-winged flies, particularly those of the stone-clinger/heptageniidae varieties, are characterised by flattened triangular bodies which don't lend themselves to imitation using conventional tying methods.

There are methods for tying stone-clinger nymphs using lead wire or sheet as an underbody, flattened with pliers to give the desired profile. I’ve tried tying them that way, but it’s a bit of a faff getting the body shape right, the squashed lead doesn’t give a very robust body and with all that heavy metal in their arse the resulting nymphs swim like bricks instead of wafting about in the current like a misplaced natural. I like to control the fishing depths of my nymphs reproducibly by using a tungsten bead pattern on the point or dropper, so a stone-clinger pattern with an unknown weight of lead squashed into the body doesn’t work for me.

In the past I’ve tried using different types of plastic to make a flat skeleton for the abdomen, but the problem has always been in securing the material to the hook shank. Cutting triangles from acetate or other thin sheet material always resulted in the shape being distorted by the thread warps or the body slipping and twisting around the hook. Then I discovered plastic canvas.

Plastic canvas is sold in craft stores as a base material for making pictures using cross-stitch and other embroidery techniques. It’s a flexible translucent sheet about 1mm thick with a grid of holes. Look out for sheets of material marked '14 count', which have 14 holes to the inch. 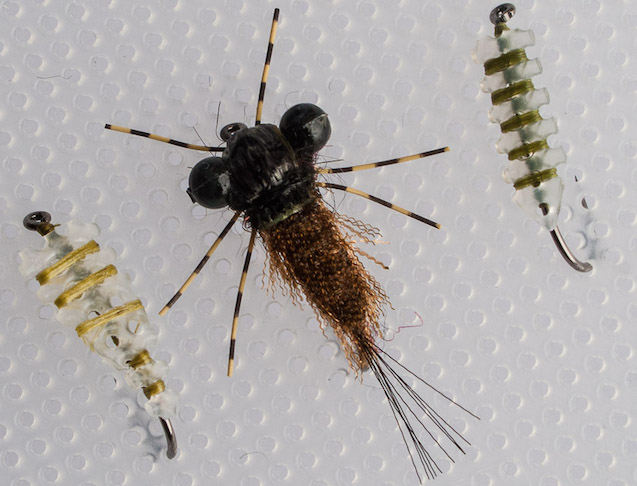 Cutting the sheet along the lines of holes produces notched strips which are ideal for tying onto a hook shank with a series of thread wraps. It makes a great skeleton which can be covered with dubbing, nymph skin, latex, or as in the pattern described here my favourite tying material, organza ribbon. I haven’t tried it yet but I would bet that cutting two profiles and fixing them to either side of a big hook would make a very nice bait fish pattern for perch, pike or saltwater predators.

The Flat Bottomed Girl is a generic pattern that has all the key aspects required to imitate a variety of stone-clinger nymphs. A triangular flattened body, a large head with prominent eyes and splayed legs reflect the habitat and habit of the naturals and trigger recognition in fish on the lookout for nymphs that have lost their grip. 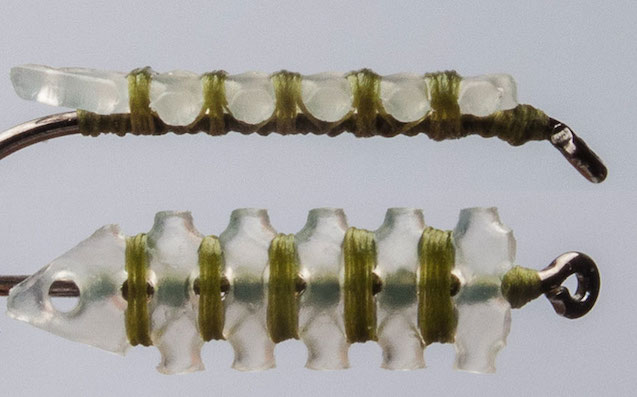 Stone-clinger nymphs, such as March Browns, Large Brook Duns, Olive Uprights, Yellow Mays and August Duns make up a good part of the diet of trout and grayling on many rivers in the UK and wider afield. The naturals vary in size from 10-15mm, so tie a up a few Flat Bottomed Girls in different sizes in dark and light colours and be sure to whistle that Queen song as you fish them. 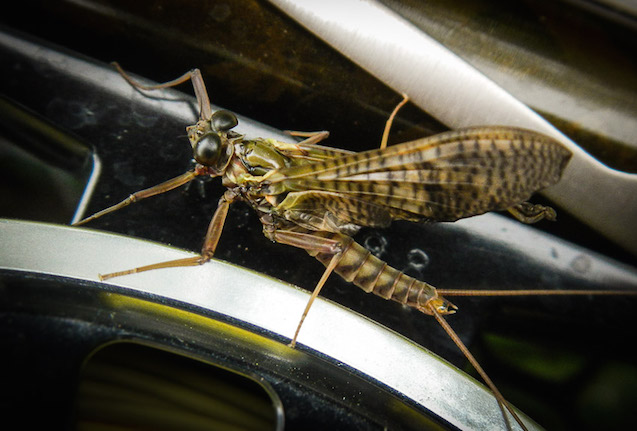