David Wolsoncroft-Dodds knows when it is time to put his pike gear away.

At some point every year, winter loosens her grip. The days get longer; the water temperature rises and the pike hunt to fill their bellies, before switching their attentions to spawning. Whilst this usually occurs from Mid-February to Mid-March, I rely on observation rather than the calendar to tell me when it’s happening. The precise timing of this productive period is driven more by conditions than by predictable chronology.  This article isn’t intended to be a natural history treatise. Rather, it is about catching big pike. I’ll confine my comments and musings to ones that are relevant to the pursuit of our quarry. 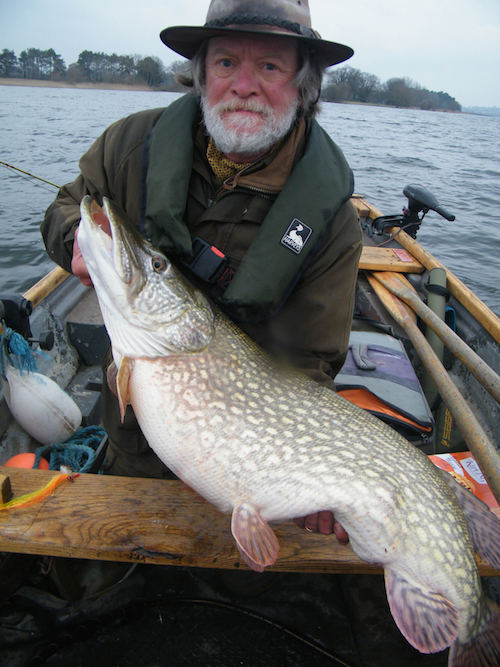 It’s great when the pike have read the script! The picture doesn’t do her justice. She was simply too heavy for me to hold her out for the camera!

I’ve read many different pseudo-scientific pieces about what triggers pike to embark upon their nuptials. Often these pieces have propounded contradictory opinions. Rather than indulge in blatant plagiarism which perpetuates an ill-founded theory, I’ll restrict myself to citing personal experiences. I am usually busy with my guiding as the old coarse-fishing season draws to its close on the 14th of March and keep a close eye on the old estate lake over the following weeks. Often, I continue to fish for pike on venues that don’t adhere to the traditional close season. Over the years, I have witnessed pike spawning at any time from mid-February through to late May (though usually it has happened before the start of April). Last year, Brandon Davies, one of my guiding clients, caught a huge pike on the 17th of June, which had clearly only just spawned. Whilst I don’t comply with a date based close season, I do leave the pike in peace when I realise that it isn’t really ethical to be putting them under stress. Usually, we get an inkling of when this is happening – suddenly, the fishing becomes much less productive. 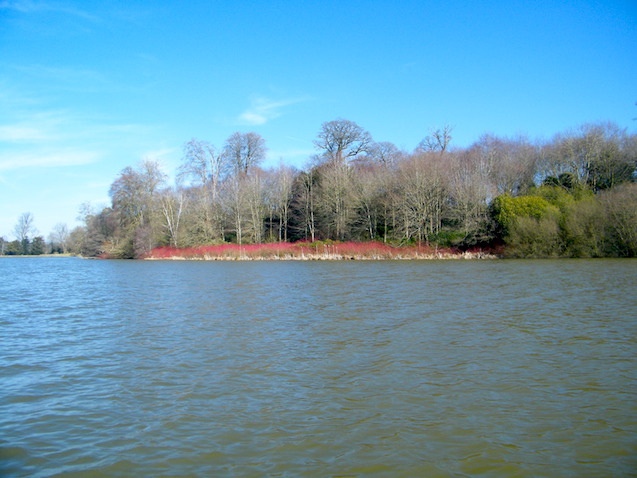 At some point, winter loosens her grip. The drop-off along this shoreline of the old estate lake at Bowood House leads from deep water to a shallow spawning area. It is a perfect hunting ground for a big pre-spawn female pike.

Pike spawn in shallow weedy areas. These are places which benefit most from warming water temperatures. They are often the same places that coarse fish will choose to spawn in some weeks later. This gives the pike fry a readymade larder.

These places are not the pikes’ winter quarters. Pike have three imperatives – survival, feeding and reproducing. At some point, as winter turns to spring, the last of these becomes the most important. Before the pike arrive in their spawning areas, they will move and hunt along the routes and drop-offs leading from the deeper water. Identifying these locations and routes is the key to finding and catching a specimen pike.

I suspect that individual pike return to the same particular spots to spawn. I base this statement on repeat captures of different fish over the years and from detailed observation. This can mean that certain areas see appreciably more activity than do other seemingly similar places. On lakes that have been created by damming streams or rivers (such as typical trout reservoirs or larger estate lakes) targeting the old stream beds can be highly productive. 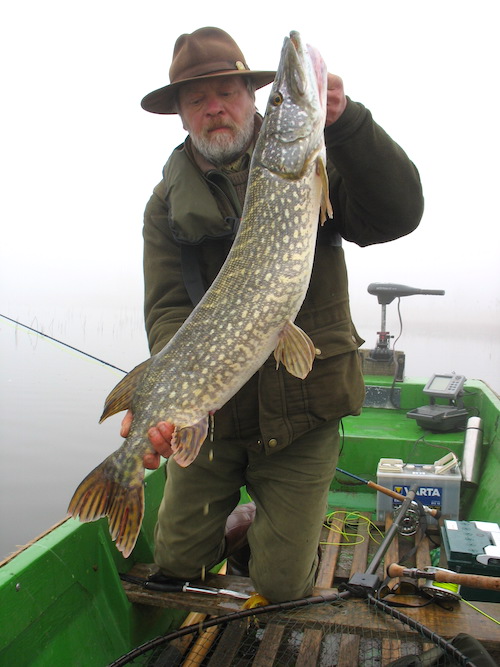 Time to stop! I was fishing a lake in Wales with Phil Wakeford (a former president of the Pike Anglers Club). There were several other boats on the water with lure and bait fishers. My fly caught the only pike of the day from the shallows where the lilies were starting to emerge. She dribbled some eggs onto the unhooking mat and convinced me to call my season to a close and catch a few trout!

Typically, I will fish from a boat and will try to set up a slow drift along a fancied route or contour. If the prevailing breeze doesn’t cooperate, I will use my stealthy electric outboard motor to manoeuvre the boat and will ‘anchor hop’. Doing this, I have often encountered a pod of male pike of around 5-7lbs. These smaller male pike tend to move to the spawning areas before the much larger females. Whilst catching a few lively jacks can provide some entertaining sport, I will then try to work out the previous part of the route - usually a couple of feet deeper- where I may connect with a much bigger beastie. Granny is a cannibal but at this time of year can look on the little males as toy boys rather than lunch!

Some years ago, on my birthday (the 1st of March) I took my son for a session on the old estate lake. We were bank fishing and I set him up with a spinning rod, armed with a perch pattern diving plug - he was only eight years old and hadn’t mastered a 10wt fly rod and big bait fish streamers! I walked to the next fishing stage and started to tackle up. Before I had made my first cast, an excited cry of “Daddy – I’ve got one!” made me grab the big landing net and hurry to Seb’s assistance. We only had an hour or so before we needed to head for home. I don’t think I managed to wet a fly! Sebastian caught eight pike - the biggest at 10lbs was an unusually large male. I didn’t begrudge him his fun but I returned to the lake first thing the following morning, determined to have some fun of my own! I fished the next stage back from where my son had enjoyed his lively sport and was rewarded with a stunning pike of more than 20lbs. 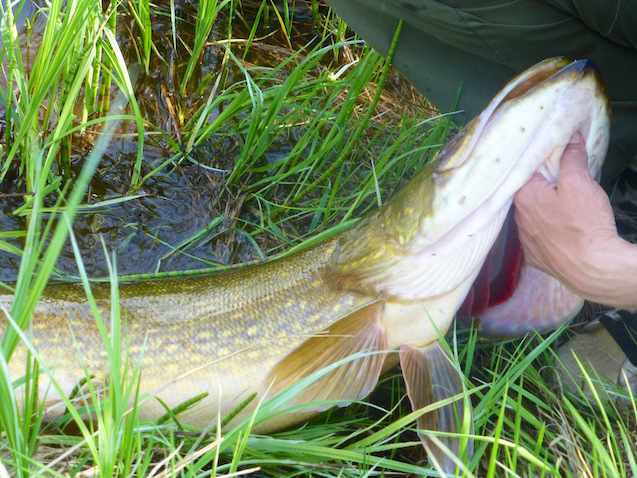 The holes along the jaw line show the pikes’ neuromast system which allows them to pick up on vibrations given off by prey fish.

On the 16th of March last year, I took Nick Clarke, an occasional guiding client, out on Chew. The estate lake at Bowood House had fished well right up to the close of the season a couple of days previously and I thought we had good prospects of a few more days of ethical fishing.

We arrived shortly before the office opened and offloaded our equipment. 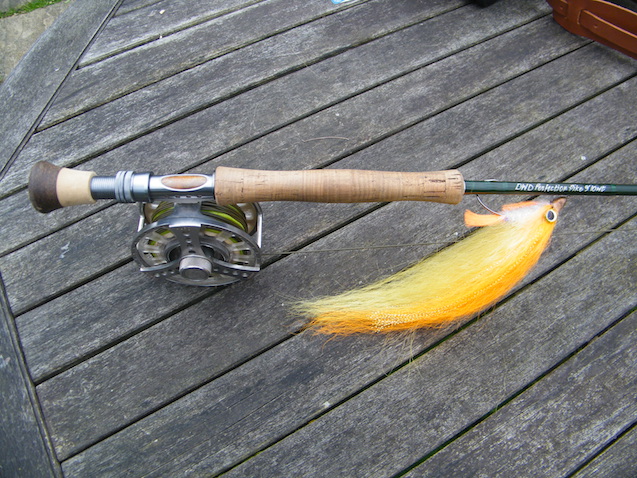 We hedged our bets and tackled up with different flies and different lines. After watching the obligatory safety video, we loaded the boat and headed out from the jetty (I have to compliment the current members of staff at Chew who work hard to get you out on the water as promptly as possible). We fished along the side of a bay, working the drop-off that led to the shallow corner. A group of Italians, one of who had caught a 40lb pike the day before, were fishing along the opposite side of the same bay with a dogged persistence that implied that our starting theory was correct. A couple of hours later, one follow and a desultory missed take convinced us it was time to pull out and head to the next spot. I had lost my trusty yellow and orange streamer on a snag on the bottom of the lake. I didn’t have a replacement in my box. Nick said it made sense to continue to use different colour options and offered me one of his own (I had tied it for him eight years previously).  I killed the petrol motor at the mouth of the bay and used the electric engine to set up a drift broadside on to the breeze, along a line where the drop-off sloped down to between ten and eleven feet of water. The wind was from a perfect direction that allowed us to gently track along the contour into the bay. 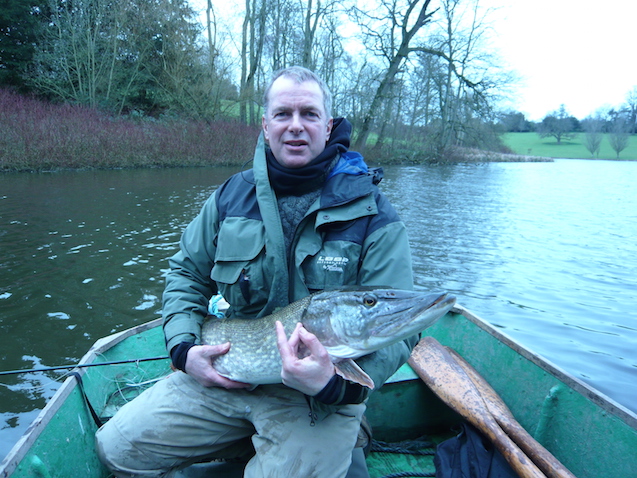 Mike Duxbury, a regular contributor to the pages of Fly Fishing & Fly Tying, with a March 20lb pike from the old estate lake.

Nick, a left-handed caster, was fishing the ‘inside track’ from the front of the boat. He was working his fly along the slope, using an intermediate line. I was fishing from the stern, along the bottom of the slope using a line with a sink rate of 3” per second. This combination enabled us to cover a wide stripe of water as we drifted parallel to the bank. At 11.30, out of the corner of his eye, Nick saw me execute a solid strip strike and lift my rod into a fish. He asked “Is it a good one?” For a couple of minutes, I wasn’t sure. The pike was cruising side on and I hadn’t got a straight-line direct pull to feel her properly. My 10wt Sage pike-fly rod was suddenly wrenched over and my reel started to purr as the drag was forced into action. Oh yes – this was a big pike! There were no pyrotechnics – just a powerful, brute force that made my muscles burn. It was a long time before I got her up in the water and started to feel a measure of control. I gave silent thanks that my knots had been secure and was confident that my strong tackle would hold. I slowly dragged her over the big net and Nick lifted it without any mishap.

He struggled to bring the pike on board. Nick is a big strong chap. He goes to the gym. He trains with weights. This was a truly enormous pike! She was also clearly an exhausted pike. The big barbless single hook was swiftly removed.  Nick quickly obliged with my camera and we immediately got her back into the water. I had to support her for several minutes before she kicked and swam off strongly.

I spent the rest of the session floating on a hazy cloud of euphoria. I didn’t get another take – I didn’t care! 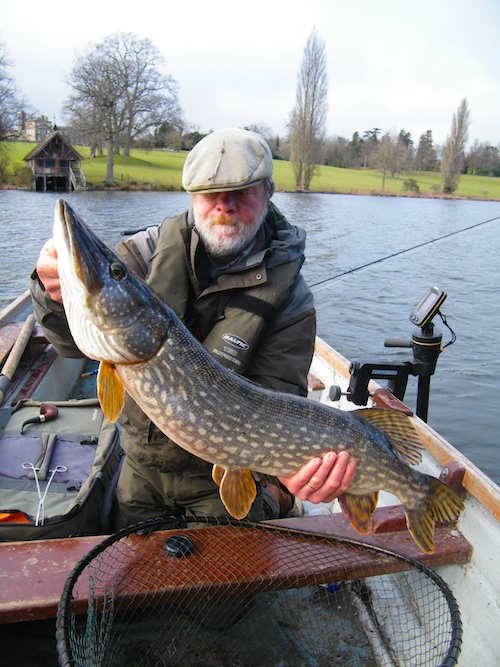 A splendid pike from the same drop-off. The following cast saw my guiding client, Brandon Davies, bring a good fish to the boat.

When you fish a water that is home to big pike, you need to concentrate at all times. A single take could be the difference between a red letter day and a frustrating blank. Some ten years previously, I had fished at Chew in March, with the same Nick Clarke. The weather had been ghastly – a spiteful cocktail of wind, rain and hail. By late afternoon, we hadn’t so much as sniffed a fish. At about half past four, I had a thumping take which I made a complete hash of. My leader was snapped like cotton – the result of too skinny (18lb) fluorocarbon, clumsy fingers and a brain fuddled by the monotony of casting and retrieving without any action. A couple of casts later, I had another take from what was obviously another good fish. That one came adrift after about thirty seconds. I was luckier than I deserved to be. Returning to the same spot some fifteen minutes later, I was fortunate and connected with a third good pike of 23lbs which I managed to bring to the boat – it was a salutary lesson which I have tried to heed ever since.

I now use 30lb leader material as a matter of course and take a short break if my concentration is wavering and my fishing is becoming mechanical.

David is a full time fly-fishing guide and writer.