Nick Thomas walks his local river after a flood. What does he find?

Where I live in South Wales I’m very lucky to have a wealth of rivers and streams available to me to fish for grayling in the winter. The Wye, the Usk and all of their varied tributaries offer many wonderful miles of fishing available under the The Wye and Usk Foundation passport scheme. Not this winter however; the storms of December and January saw unprecedented flooding on these waters, in many cases beyond that of living memory. I was confined to home waters, where I could quickly grab a few hours on the bank. The river was up and down like the nether garments of a lady of negotiable virtue, but on just a few isolated days the rainclouds cleared and the floodwater dropped for long enough to get out of the house for the five minute drive to the river. 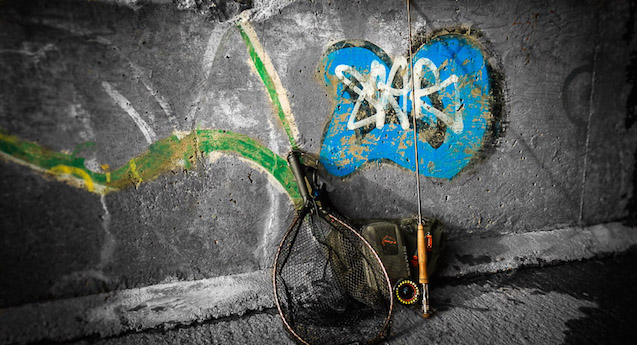 My home water is the two mile stretch of the Taff running through the north western suburbs of Cardiff where the river flows its meandering course past housing estates, rugby and cricket pitches and under a network of railway, road and pedestrian bridges. In summer the banks are an urban jungle; knotweed, balsam, brambles and bracken enclose the river in a green tunnel. You thought bracken was something that just grew a couple of feet high in fields and on hillsides? Oh no, not here; on the fertile floodplain these weeds all compete for sunlight and form a virtually impenetrable wall eight feet high. In winter the banks are threaded by a maze of trampled paths made by anglers and dog-walkers through the tangled dead vegetation. It takes a long time to learn which of these lead to the river bank and which way to turn at junctions. A mistake can lead to a lot of thrashing around with net and waders seemingly magically attracted to every twig and thorn in the vicinity. In the summer it can be a real nightmare; it’s a very brave angler who’s tempted to leave the river by a shortcut up an unknown path. Much sweating and cursing inevitably ensues as they attempt to steer a threaded fly rod down an ever bending tunnel with flies and tippet constantly catching on the dense jungle.

This winter’s flooding has completely altered the banks in many places. A couple of big fallen trees that made nice comfy seats on which to take a coffee break have disappeared completely and new huge logs have appeared in other places. Inevitably on an urban river flooding brings down a new crop of litter and detritus. It’s not as bad as it used to be; the removal of free supermarket carrier bags means that the bankside trees no longer form long advertising hoardings for Tesco and Asda as they used to do. There’s still a lot of rubbish that comes down when the river rages through at two or three metres above normal level. Much of this carries on down to the lagoon of Cardiff Bay where it’s recovered by the sweeper boats that ply back and forth sieving beer cans through slatted conveyor belts like mechanical baleen whales.

Some stuff doesn’t make it all the way down river and wandering the banks this winter I’ve come across an eclectic selection of flotsam which caused me to pause and think on how the hell some of these lost possessions got to be floating down the Taff. 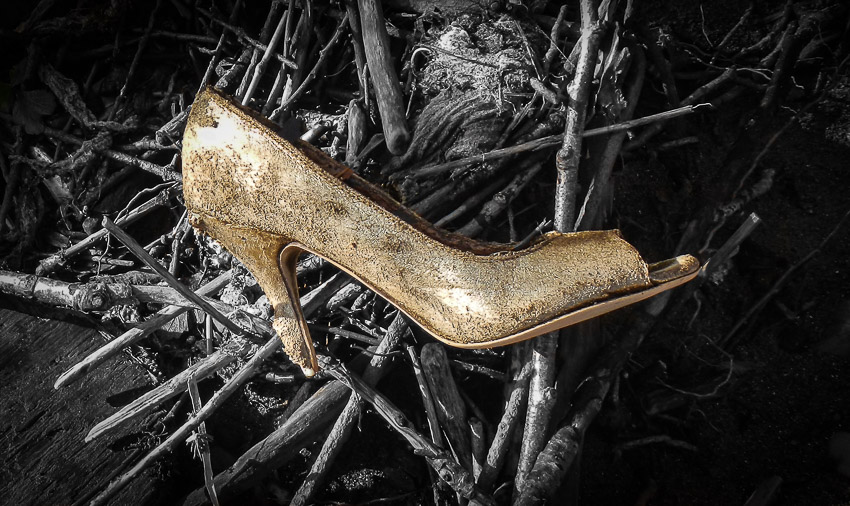 How does a gold lamé high-heeled shoe get to be washed up on a pile of sticks? Dropped after being removed from aching feet on the walk home after the last bus in Troedyrhiw? Maybe thrown at an errant husband after chucking out time in Quakers Yard? Perhaps propelled from a pistoning foot at the peak of pleasure and passion in the bankside bushes of Ponty Park?

Wandering along the edge of one of my favourite grayling runs where a shallow shelving gravel beach gives easy wading access to a deep channel, I came to a spot where the gravel had been scoured away down to dark silt and sand. Here was the rather macabre sight of a partially dismembered Barbie embedded in the sand; her fixed plastic smile was somewhat at odds with her situation. I can only speculate on what led her to end up in such a sorry state of partially preserved modesty. She was tenacious though; when I went back a week later following a rise and fall of over two metres in the river level, she was still there. 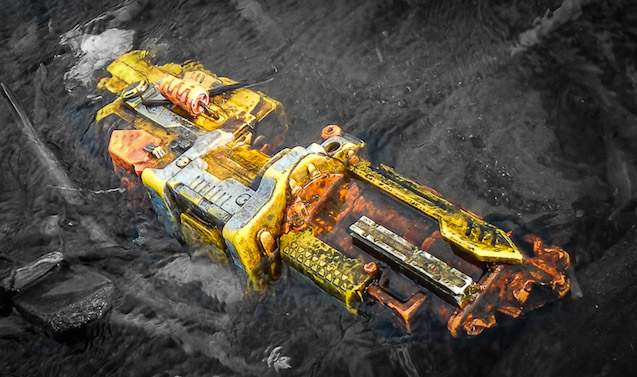 At the bottom of one of my favourite summer pools where the water eddies into a side channel I stumbled over what I guess must once have been a young boy’s prized toy; nearly three foot of bright yellow and orange toy weaponry. Had this been discarded when broken or when the interests of advancing age turned to softer nicer smelling attractions? 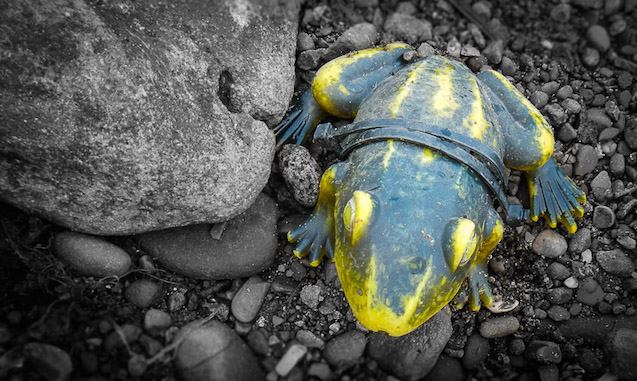 Further downstream hiding in the lee of a large boulder and looking right at home was a large yellow and green plastic frog. For some reason I was put in mind of a bondage version of a fairy tale involving a princess and a transformed prince. Why would someone tie-wrap a plastic frog? I left him there sitting quietly beside his rock to continue his journey downriver on the next flood.

Those few days this winter have put a new perspective on a river I love to fish. Yes the wilder rivers of Wales are more conventionally scenic and have less obvious evidence of the presence of people, but the fish in the Taff are just as wild and the fishing is just as varied and challenging. If you are interested in learning more about the history and fishing on the Taff I highly recommend the recent BBC Wales three part TV series The River Taff with Will Millard which is available on iPlayer at http://www.bbc.co.uk/programmes/b0701s43.

It’s possible that climate change may make our future winters in the UK more like the one we’ve just had, so if you are after a fly to fish on opportunistic days between floods I suggest you try this one. The Afterburner is for fishing deep pockets and holes when the river is settling down after a flood but there’s still a fair bit of colour in the water. At these times I want to fish a highly visible fly under the rod tip along the edges of fast currents where grayling will be holding close in to the bank. To get the fly down to the fish quickly in a short drift I need weight, a lot of weight, which means a big tungsten bead. Those of you who paid attention in maths lessons will remember that the volume, and therefore the weight, of a sphere is proportional to the radius cubed. That means that a 4mm tungsten bead gives more than twice the weight of a 3mm bead, and a 4.6mm bead is more than half as heavy again. Putting such stonking big beads on a small hook is not good as it impairs hooking any fish that take it. Using a big hook is one solution, but a bright dressing on a big hook risks spooking the fish. The Afterburner is effectively a small bright fly tied on the end of a large hook; the black bead and body are stealthy so the tag and tail attract and give an attack point while the rest of the fly fades into the background. 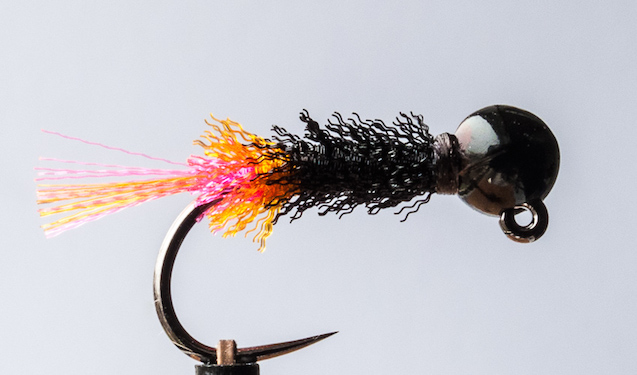 Fishing a braid rig with the Afterburner on the point and a pink OJO (ESF #47) eighteen inches above on a short dropper got me a good number of nice grayling in very difficult conditions this winter, as well as a nice chub, the archetypal urban river bruiser. 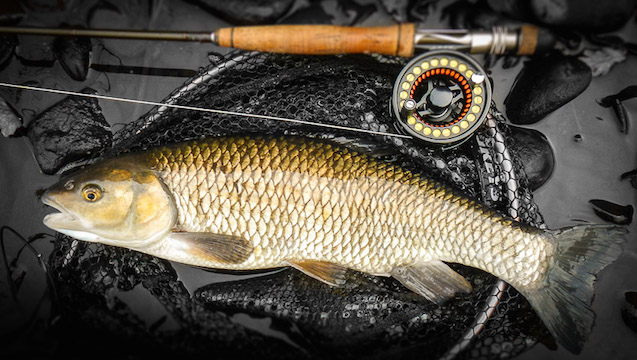