Join Paul Gaskell as he heads up the river in search of trout. Pics by John Pearson.

Pulling the car off the narrow dusty track and putting the parking permit in the window, one thing was abundantly clear. It was HOT today. High-factor sunscreen, cap and the lightest shirt I owned would be coupled with breathable waders – and still leave a degree of uncertainty as to whether the occasional puff of breeze was enough to make things bearable under the deep blue sky. I’d stuff a small box of flies in one shirt pocket and a spool of tippet in the other since, with my forceps attached to my wader braces, I could avoid being encumbered by a fishing pack or vest. I would definitely shove a drinks bottle into my wader pocket though. That was sure to be a welcome concession later in the afternoon. 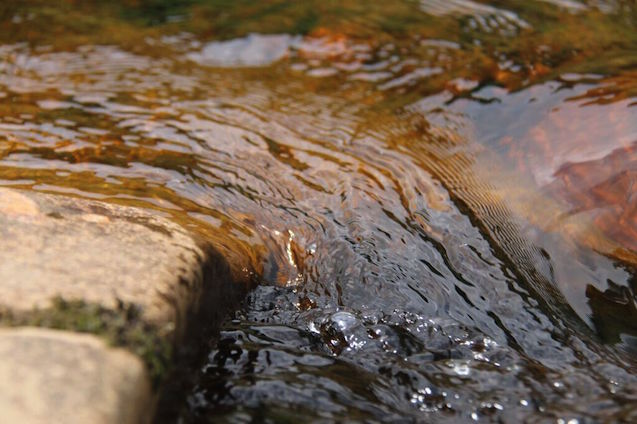 There were a few things that kept me hopeful of success. First of all, the streams I intended to fish were up quite high on the moorland – and consequently already benefitting from some of the cooling associated with elevation. Secondly, although little rain had fallen recently, the lack of drainage channels on the peat-bog at the top of the river meant that that water seeped slowly out of cool, sub-surface sources. As a result, the warm weather that is perfect for many insects, was coupled with cold water – which the trout find to their liking. The urgent, tumbling flow of these steep upland streams over cobbles and between boulders would – obligingly – also provide both refreshing aeration for the fish; and welcome concealment for me.

Reaching up to shut the car boot, I was aware of the shady green canopy of the birch and pine-clad slope of the valley looming immediately to my right. The understory, I knew, was lush - boggy in places -with bright green cushions of star moss where springs sought a route down the slope to the river below. You can find huge horizontal tree trunks as well as cut stumps that have been completely reclaimed by a soft moss carpet scattered liberally around the forest floor in that part of the valley. In complete contrast, to the left of the car was open moorland; reached by a pale rock-strewn path over the narrow, high sandstone bridge. My recent visits and conversations with other club members all said that there had been surprisingly few signs of insect and fish activity in the wooded valley over recent days. I choose to gamble on going left in search of active bugs and feeding fish on “the tops”. 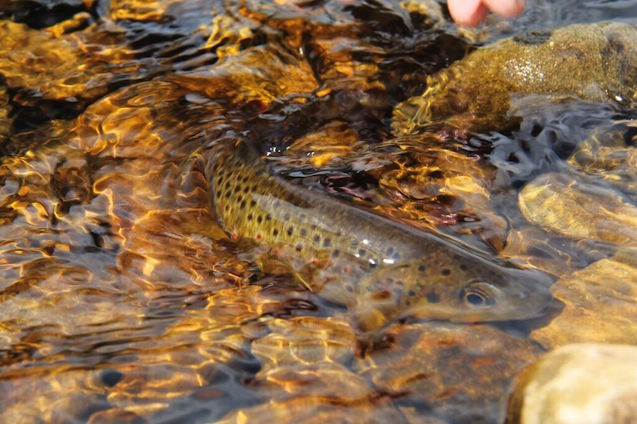 Once across the bridge and heading up-river on the streamside path on the moors away from all tree cover, the sun beat down on the exposed gritstone slabs and surrounding low-growing greenery alike.  The heat was raising intermittent warm, thick wafts  of mineral scents from baking rocks - mingled with the herby, coal-tar scent of bracken, grass tussocks and heather.  If you were transported up here blindfolded on a day like this, your nose - along with the soft buzzing of insects and staccato bursts of bird noise - would give you a pretty accurate picture of the landscape.

Picking along the uneven path, the sounds of my own breath and swallowing seemed unnaturally loud in the solitude and the August heat. Something about the open space and the warm, dry air acted to heighten the senses; which made it all the sweeter to step carefully down to the water’s edge in anticipation of the first casts. Flipping up the lid on the fly box let me take out a simple fly with a hackle at the head and a body of drab tying thread – a classic upland river recipe. I softly clamped the fly in my mouth whilst tucking the fly box back in its pocket. This left me with both hands to thread the tippet through the eye, make a well practiced knot and clip off the tag-end. 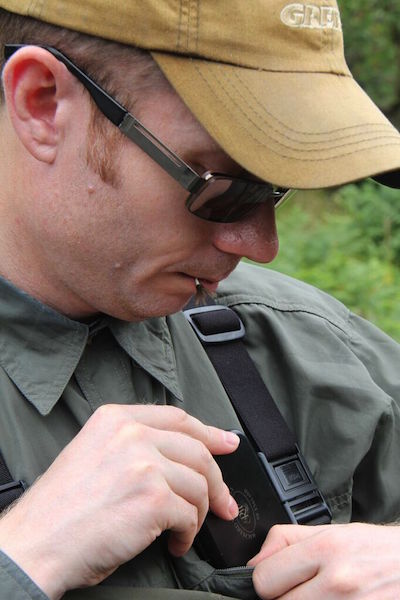 Holding onto the fly and swinging a D-loop of line behind the rod gave me a chance to feel the weight of the line working the spring of the rod. With my hands reminded of the sensation of a working rod I could let go of the fly to make the first forward cast. The light, delicate wand of a rod matched with an equally light line and 3lb tippet loaded easily; and a short tap forward zipped the line out in a crisp loop to deposit the fly some eight or nine metres upstream. I can see the fly, or at least the speckled hackle of the fly, being carried by the current an inch or two below the surface as I track back with the rod tip high at the pace of the current. Picking off at the very last second, after lifting all the line and most of the tippet out of the water, lets me flick a cast onto the edge of a tongue of current where it meets a slower foam line. This time, as the fly begins its journey back towards me, I see a fish lift from the stream bed, turn to show me its flank and then give a lazy flick of its tail to return to its lie. Only, as it does so, a quick lift of the rod causes it to burst onto the surface in a shower of white froth and come kicking, leaping and slapping downstream towards me before changing tack and surging across the stream towards the undercut bank covered with cotton grass tussocks to my left. Angling my hooped rod to my right soon drew a beautiful wild trout into my waiting net and I found myself admiring a living, molten jewel of a fish in the mesh.

The rosette of hackle is crushed pleasingly in the jaws of the fish just behind the eye of the hook which protrudes to within easy reach of finger and thumb at the corner of the mouth. The mouth and gills work rhythmically to extract oxygen from thin air whilst I gently twist the barbless size 12 free.  Admired for a second in wetted hand as it regains its balance; the fish kicks away and melts back into the amber peat-stained water.  Deep joy.

A quick rinse of the fly in the margin and replacing the net at my hip I’m straight back out with another cast. This time, seeking to drop the little fly on the crease between a whorled upwelling flow – no doubt deflected up from the stream bed by a sharp-angled rock – and where that boiling whorl meets a conflicting current. The fold between the two flows will suck my fly down deep, so I need to know just where my fly should be based on the short remaining section of tippet that I can still see. I am fortunate to be focussed in roughly the right plane beneath the surface and a dull brass “wink” that could be part of a flank shows through the peaty lens. I lift and a really good fish hoops the rod over to its full fighting curve; that deeper gully must have been claimed by the king of this little pool. Keeping the rod tip over the fish where possible and turning it when the chance presents itself yields the privilege of a chunky, eccentrically-spotted fish gracing the soft folds of mesh. To maintain balance in the universe, I of course, fumble the fish after slipping the hook free and it flips back into the water to deny me a photograph. Never mind, I can probably make it bigger when I come to remember that fish without the unflinching truth of a photo to spoil things. 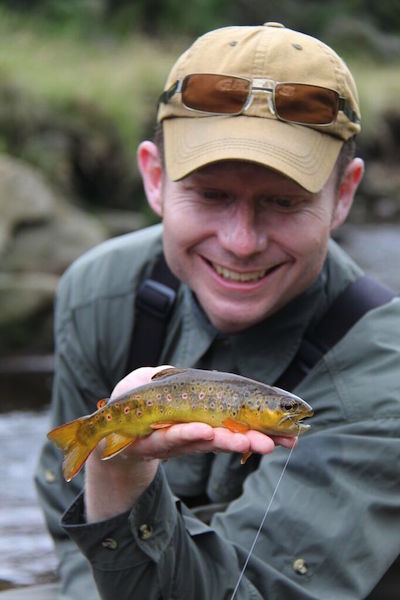 The day settles to a comfortable rhythm of progression upstream, periodically interrupted with spells of contacting, landing, losing or missing fish coming to the fly. Some good casts are rewarded, other great casts are ignored and several “oh bugger” casts find the heather on the bank beyond their intended mark. Working along, the river gradually reveals the preferred types of lie in today’s conditions and I can choose to try some likely spots or allow myself to leave others for a following angler or another day.

Expending so much focussed attention on the river impressed on me once again the beautiful form that water takes when it is a river; with the tinged but transparent water bringing out the best in the dappled tones of the submerged cobble bed. Wherever a smooth plume of water flowed through a notch in a lip formed by smoothed rocks deposited at the tail of a pool, its glossy surface would be twisted like a thick stem of some blown-glass artwork. This would invariably feed the pool below with a prominent tongue of current that would dub out to smooth, dark, mirror-flat back-eddies either side of the main flow. Each eddy was flecked with small flattened ovals of foam – some 5p-sized and some 50p-sized with the odd palm-sized splotch thrown in for good measure. Dropping the fly into the flat, viscous surface of one of these “soft spots” and twitching it a couple of times through the foam brought a small fish airborne as it back-flipped whilst taking the fly – giving me quite a jolt despite (or probably because of) being braced for action in such a promising spot.

I catch myself feeling a powerful thirst – how long ago during my absorption in the rhythm of fishing did that start? Making my way to the opposite bank to sit down for a drink, I see a heron dip to a half crouch about 80 yards upstream. After a second, it partly raises its wings and then launches into the air to lope away up-river into the distant tree tops and I smile inwardly at the private nature documentary playing out all around. After a few good draughts from the drinks bottle, I wipe my chin with the back of my hand and stuff the bottle back into my waders. Another blast from the midge repellent spray-bottle is spread to where it needs to go with the backs of both hands in a poor imitation of a tree frog waxing itself (I don’t ever want it getting on anything that I actually fish with!). Pit stop complete, I continue to explore upstream.

Soon enough afterward, I feel the tug of home and those things that must be taken care of. Making the customary “last half a dozen casts” does actually, on this occasion, allow me to finish on a fish. So, with a pleasant tiredness setting in and a warm glow that owes something to the slog downstream in sunshine that still retains its strength  – but owed more to the bone-deep satisfaction of a day well-spent outside, I return to the car.

It has been said that perfection is not when there is nothing more to add; rather when there is nothing else to take away. Sliding the segments of my tenkara rod back inside the protection of its cork handle and reflecting on the direct conduit to this wild landscape that the method had afforded me on this day, I can only agree.

Paul has produced a series of 22 (and growing) email tutorials on European river fly fishing methods. You can receive these Free by sending a request to paulgaskellflyfishing@gmail.com. From lesson 23 onwards – Japanese tenkara will start to feature more frequently as well.