When the sun is shining and the water warm and the trout fishing slow Tankred Rinder switches his attention to barbel.

Sunshine, sweat, skinny water - not the time for speckled trout. Lethargically they’ll retreat to shadowy, cool hide outs. Will only leave their spots for feeding in the very early morning and very late evenings. Besides, they are particularly susceptible to stress induced risk when being played in oxygen depleted water and through careless handling after landing. Why not target cyprinids on the fly then? 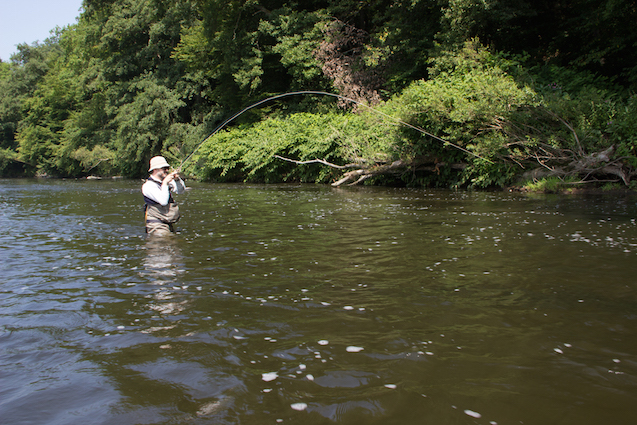 A family of fish particularly resilient to higher water temperatures; its most interesting members - barbel and carp - reach weights one rarely encounters in river trout. Fish that still show fighting power and stamina when salmonids would have already tipped over on to their sides. Fish endemic to our rivers that in the case of barbel have not been reared in farms. In other words, a more than attractive alternative to nymphing for trout. 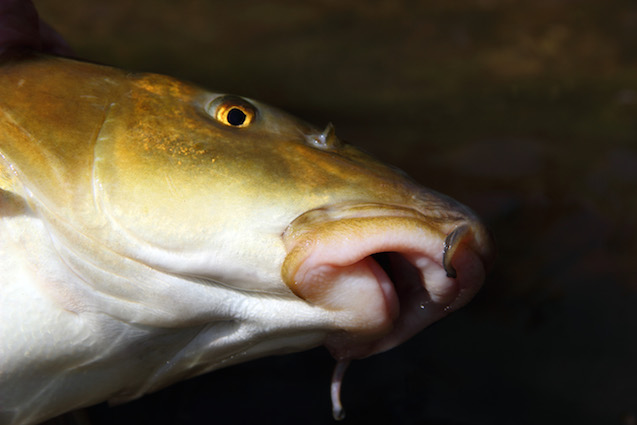 My interest in actively fishing for barbel had been stoked when I encountered them while nymphing for trout. Either as a coincidental by-catch or when observing huge flanks deep on the river bed, turning to their sides to better pick up shrimps and larvae with their downturned mouth. Quite often I had to realise that I was completely undergunned with my fine trout and grayling tackle against the strength and stamina of barbel. And while you still manage to land them with patience on a 3wt rod and a 0.14mm tippet, I’d recommend stronger tackle for actively targeting barbel. After all the chance of catching more than one five-pounder in an outing is real once you’ve discovered a reliable spot. So why put fish under unnecessary stress by playing them longer than needed with inappropriate tackle?

Being a shoal fish, the chances of catching more than one specimen barbel in a day are much higher than when fishing for trout. Besides, they grow to very respectable sizes even in small streams. Depending on the size of water I’ll opt for a 5wt or 6wt rod when fishing for barbel. The last few years saw a trend for longer (10’-11’) rods when bottom nymphing. One reason being line control to reduce the amount of fly line on the water to next to zero, i.e. when French nymphing. With good technique it is however also possible to bottom nymph with shorter rods. The Austrian fly fisherman Roman Moser has developed a mending technique which greatly assists with that. For larger rivers I do recommend to take a 6wt rod with a length anywhere between 9’6” – 10’ though. And not to mention a tippet strength (0.18mm minimum) suitable for stronger currents and fighting fish that will make use of that current when being played.

Once you’ve really got a taste of it, it also pays dividends to invest in a larger landing net. Your classic trout net will lead to unnecessary scary seconds when trying to steer a 23”+ barbel head first into the net. I can live without the thrill of a broken tippet by a fish, whose length extends far beyond the length of your average trout net. 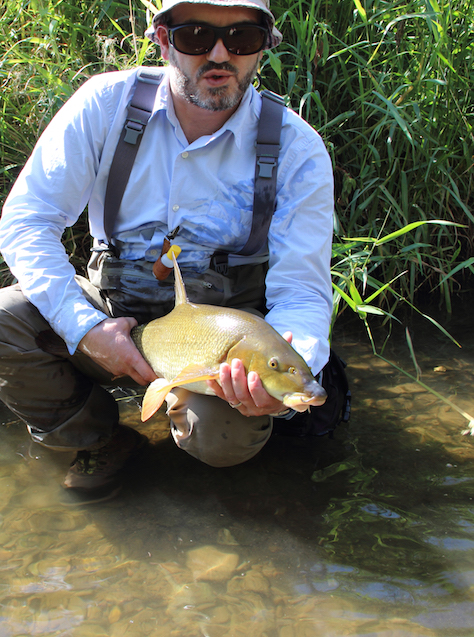 When opting for conventional nymphing methods – upstream and across on a long line – instead of modern ‘short-line’ tactics i.e. Czech Nymphing, it still needs much longer leaders than when fishing for trout or grayling. Michael Wenzel a master nymph fisherman for barbel gave me the following advice for leader set-ups. Most readily available knotless tapered leaders are somewhere between 7’-9’ long. He prefers those with the leader ending in a 0,25mm tippet. To this end he attaches another tippet of 3’-6’ length with a diameter of 0,22 -0,20mm and adds another tippet of the same length with a diameter of 0,18mm. That way he gets an overall tapered leader of 15’ – 18’ in length. So what are the benefits of a leader of considerable length? Even lighter nymphs – generally moving more natural in a dead drift that heavier ones – can be fished with this set up. The fine tippet and a longer drift allow for nymphs to still sink to the bottom during a prolonged drift.

Not always – but definitely between late autumn and spring – is it absolutely necessary to get one’s nymph right to the bottom. While European barbel – unlike their Spanish relatives – are for the most part bottom dwellers, during the warmer months they occasionally chase after ascending nymphs and pupae. It is a sight not to be forgotten when a 5-6lbs fish rolls on the surface. While initially I thought a massive trout went after top layer food, I can by now positively confirm without doubt that even European barbel are willing to leave the river bottom for an ascending or emerging sedge pupae. From fish rolling just sub-surface, to down-turned mouth protruding through the surface, to fish breaking through the water like a trident missile, I witnessed it all. It sounds unbelievable for a bottom dweller, though I’m certain some readers can confirm my observations. 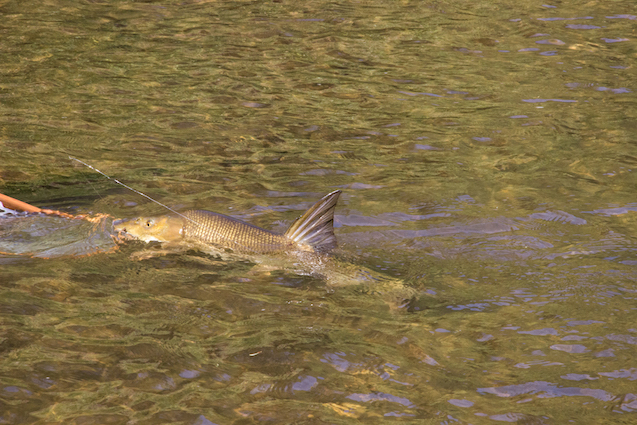 The success of short-line tactics such as Czech or French nymphing can to a big part be contributed to the very natural and most of all straight-line drift of nymphs in line with the water current. Both techniques developed because of certain short-comings. Lack of quality tackle in the case of Czech Nymphing and high fishing pressure with regard to French nymph tactics. Wherever one doesn’t necessarily encounter such difficulties, traditional nymphing techniques can easily be as effective, provided some thought and adjustment goes into it.

In classic nymph but also dry fly fishing the most preferred casting direction is up and across. Once the line has landed, one or several consecutive mends are being performed to avoid drag. Sooner or later – everyone who’s ever fished the dry fly has encountered that – drag sets in even through the slightest belly in the line. For the nymph fishers this effect is not so obvious. One’s nymph may fish deep, but still behaves suspiciously unnatural. It might be tempting for trout to chase a nymph that’s dragged against the current, but barbel will certainly not break out to the side to go after a nymph swimming across the flow of the river.

The Austrian fishing legend Roman Moser has developed a certain technique on his home water the Gmundner Traun – a river of respectable width – that allows for natural straight-line drifts even over considerable distances. One’s nymph is still presented up and across. But contrary to standard line control techniques – a quick upstream mend of the line once the fly has landed on the surface – Roman first performs a downstream mend of the line, followed by a sharp upstream mend. This rod movement puts a loop looking like a U at the tip of the fly line. As a result, the pressure of the current doesn’t immediately effect the leader, since it first levels the u-shaped belly the angler has mended into his or her line. Thus a longer dead-drift can be achieved. 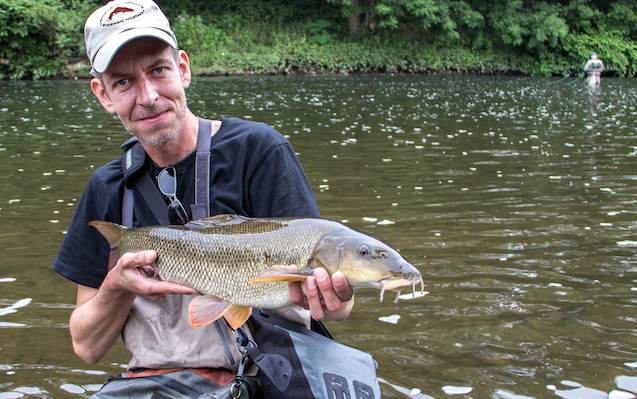 Barbel grub for food in the bottom substrate or take up food being washed their way. For that reason takes are usually quite subtle, contrary to trout or grayling which often move towards their prey and then turn back to their holding position. An almost unnoticeable check or stop in the line indicates having come into contact with something – be it a barbel or a rock. Snags are unavoidable when bottom nymphing and are the price to pay to get your fly as close to the taking zone as possible.

A seeming snag however quite often turns into a hooked big barbel. The laughter of my friend Michael Wenzel still rings in my ears, when he told me of his mate trying to undo a supposed ‘snag’ by pulling wildly on the line. The taut line got finally released, when a huge barbel on the other end got fed up with all the pulling and decided to swim towards its tormentor. That I managed to repeat this folly a mere five minutes after having listened to this depiction still brings tears to our eyes when recounting that day. Therefore, if you have contact and that thing on the other end of the line feels static, chose to wait for a few seconds. Then apply a little more pressure and move your rod from left to right, while steadily increasing pressure. Chances are good you’ll encounter a big fish on the other end that initially wasn’t very bothered when you drove your hook through its mouth. Only after a short while something won’t feel right to him and he will get going to some other place in the shoal. 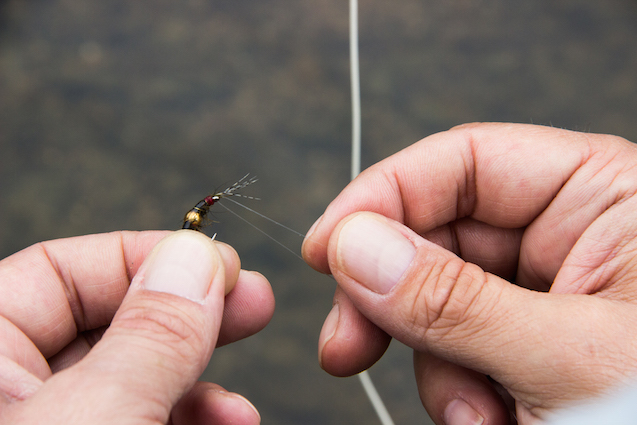 Even though barbel are real wild fish, the angler can get surprisingly close to them by carefully wading. When quietly getting into position and reducing false casts to a minimum, barbel will hardly spook and accept your presence. On top they are not very tippet shy and their large, solid scales stop them from panicking when a leader or a fly brushes across their bodies. Which has the unpleasant side effect – particularly just before the beginning of the spawning season – that one’s got to be prepared for a number of foul hooked fish in a tightly packed pool or run. In days long gone by when barbel meat was used to make fish cakes, the shoaling behaviour had been taken advantage of and barbel were caught by pulling big bare hooks through any promising spot. Catching a foul hooked fish is a sad experience for any sport angler and it dampens the joy after a long hard fight and isn’t something to record in one’s catch log. Catching fish hooked by a fin or in the body is nothing to be proud of – regardless of how big the fish on the other end of the line is.

But their shoaling behaviour also works in favour of the angler and has the nice side effect, that one hardly encounters small barbel at all. Being organized in a strict hierarchical order, the largest specimen will always be found at the beginning of a shoal. Once you’ve localized a shoal you can count on catching the bigger ones in it.

Very few rivers still hold a population of truly wild fish. Regular stocking – to maintain population strength or to provide catch for anglers overly keen on a return on their annual license cost – has led to a situation that very few fish – at least over here in Germany – have sprung and hatched in the river they are getting caught in. With barbel on the other hand, considered a poor table fish with ‘tasteless’, bony flesh, you can rest assured that no human has made any effort to put the fish there where you’ll have caught it. Being cautious but no shy fish, they are driven by other instincts and catching one of them is an indescribable pleasure. 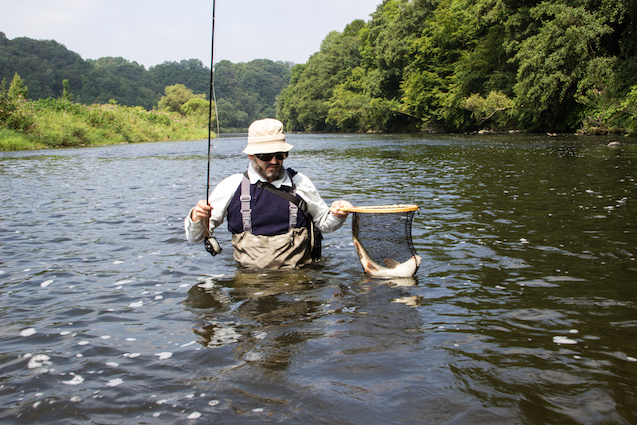 An intact and self-reproducing trout and grayling population on the other hand requires particular protection. During the dog days of summer, salmonids being highly sensitive to temperature and oxygen depletion need an angler’s restraint. Anyone who’s got the chance to devote his angling time to a robust and strong type of fish should make use of this opportunity. And besides, barbel are a highly attractive alternative due to their size and fighting power.

On some mixed fisheries typical of barbel there is also always the possibility to extend one’s angling season – wading restrictions provided – from the end of the trout season well into winter. I am very grateful to have the chance to cast to these wonderful fish right at my doorsteps and nymphing for barbel ranks amongst the highlights of my fishing season – poor man’s bonefish indeed!

This article first appeared in the excellent Forelle and Asche. Tankred translated the piece into English for those of us who do not speak German!