Nick Thomas comes up with a different approach for his duo set up.

Fishing a duo of dry fly and nymph is a very effective way of fishing when you are searching the water without obvious evidence of where fish are feeding; the fly fishing equivalent of an each way bet. I like fishing this way, particularly in pools which have a mix of slow and fast water where trout or grayling may be feeding on the bottom in the fast current on nymphs or hanging off to the side to rise opportunistically to insects drifting along the edge of foam lines. 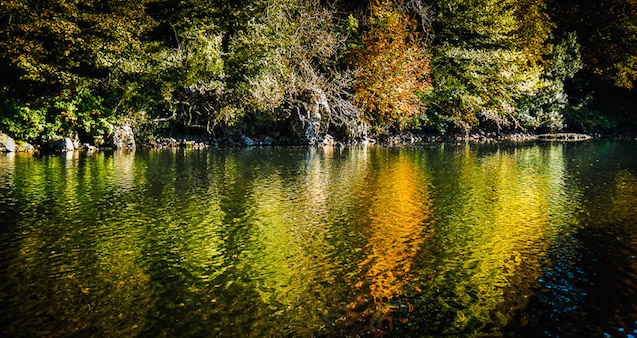 Until recently one thing had always bugged me about fishing a duo rig; connecting the two flies so that they both fish effectively. From what I’ve read I’m not alone in this and a lot of anglers put up with less than optimum presentation of the dry partner in the duo and count any fish actually hooked and landed on this fly as a bonus, relying on the nymph to catch the majority of their fish.

I always fish barbless hooks so using a New Zealand style rig is not an option; the link to the nymph just slides off the point of the dry fly at the first opportunity. I’ve tied dries with a loop of mono incorporated at the back of the body so that the nymph can be tied to that. It works, after a fashion, but it’s an extra tying step, tying on the tippet to the nymph can be a faff on a dry fly with tails and the trailing tippet to the nymph can interfere with hooking any fish taking the dry. Some anglers advocate tying the nymph to the eye of the dry fly, a simple solution, but the duo is then inherently unbalanced. Casting tension can pull the two lengths of tippet to opposite sides of the hook eye resulting in the dry fly sitting sideways and skating as it drifts and the weight of the nymph pulling on one side of the dry tends to tip it over onto its side.

My standard approach was to fish the dry fly on a short dropper and the nymph on the point. This works OK, but can be prone to tangles when using a big buoyant fly and getting the dropper link to sink can be a problem, so it’s not the optimum presentation for the dry fly.

Then one day I was tying up a batch of nymphs on jig hooks, tying in automatic mode listening to a good play on the radio. I’d picked up a hook, viced it and was running the thread along the shank when I realised I hadn’t put the tungsten bead on the hook. I was about to pull off the thread and start again when it struck me that if I tied a dry fly wing just where the thread was hanging at the angle of the jig hook I might solve my problem with duo rigs.

Tying a dry fly on a jig hook with a vertical eye would allow the tippet lengths from the leader and the nymph to fish in the same plane as both flies. Tying the tippet to the nymph onto the eye of the dry fly below the knot to the leader would allow the nymph to hang below the dry without pulling it over sideways and the link to the nymph would be clear of the bend of the dry and not interfere with hooking. As a bonus the weight of the nymph would pull the eye of the jig hook under the surface and effectively sink the tippet from the leader. A balanced couple of dry fly and nymph would dance in perfect synchrony down swift glides and ripples and waltz slowly and temptingly through slow pools.

A few minutes later I had a prototype tied up from materials that came to hand; a simple body and tails made from organza coupled with a nice buoyant wing of Aero Dry Wing and a couple of strands of crystal flash. I’d used the combination of a dark wing with bright flash on previous flies as it gives a nice dense silhouette on the water and the two contrasting materials make it equally visible on dark and light water. Using the same materials and moving the wing forward to the hook eye produced a nice looking emerger pattern. 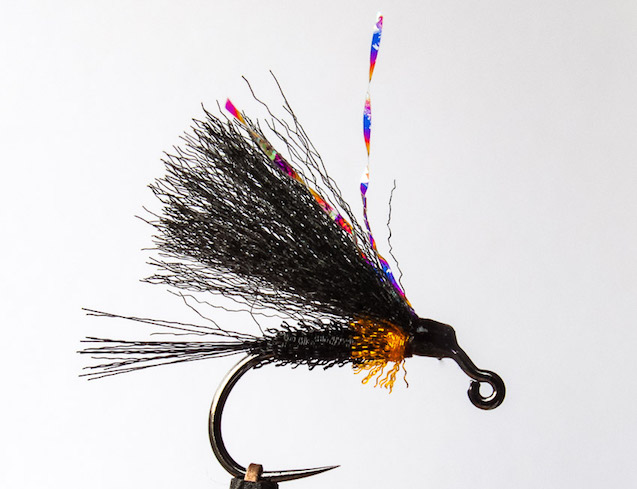 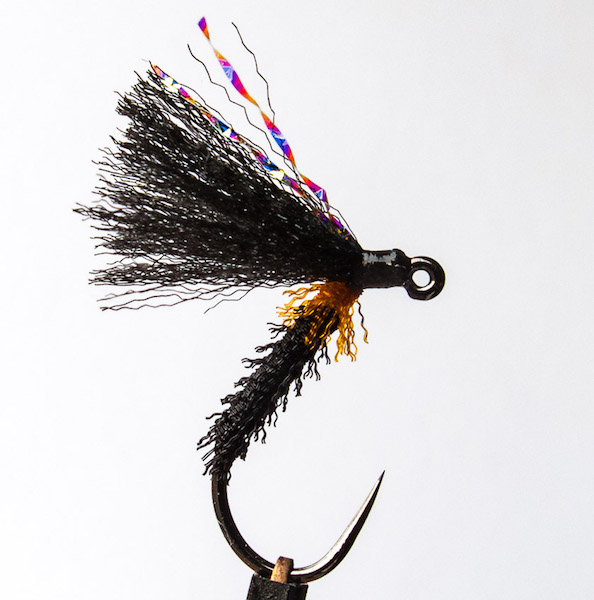 The emerger version of the Blackhawk omits the tails and moves the wing forward to behind the eye so that the flotation line is parallel to the angled section of the jig hook with the body hanging below the surface. Prepare and tie in the black and orange organza ribbon as described above, finishing at the jig angle and then tie in the wing and crystal flash immediately behind the eye.

I fish jig hook dries using a furled leader terminating in a tippet ring. I attach 2-3 feet of fluorocarbon to the tippet ring and tie the dry fly to that. A further length of tippet of lower breaking strain is then tied to the eye of the jig hook, making sure that the knot is below the knot to the leader and then the nymph is tied to other end. Tied like this the eye of the jig hook is effectively a second tippet ring on the leader with the two different thicknesses of tippet providing taper for effective turnover when casting the two flies. It casts like a dream; no tangles from a dry fly on a dropper and the tippet to the nymph lies out straight and true allowing the nymph to swing under the dry and fish effectively. Do I now hook all the fish rising to the dry? Well no; I don’t hook everything that takes a conventional dry fly, but the hooking rate is certainly improved. 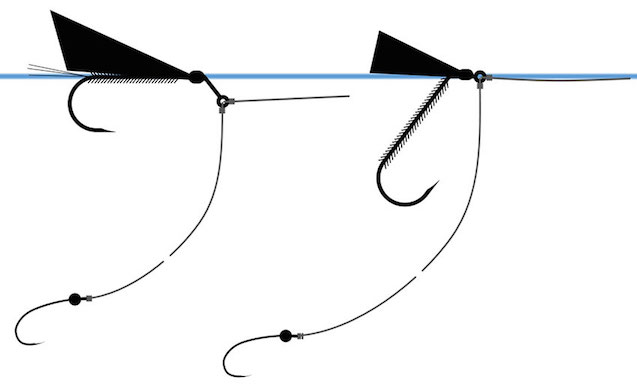 If fish start rising in numbers then you simply snip off the link to the nymph and carry on fishing a perfectly presented dry fly. If you store the nymph and tippet away on a rig keeper it’s easy to revert to fishing the duo rig if surface activity dies away. I keep a number of nymphs tied to different lengths of tippet wound around a foam disc in my pack so I can quickly change the rig to suit different depths of water as I move from pool to pool.

You can adapt the same design approach for traditional patterns; an Elk Hair Caddis or a Balloon Caddis tied in the Blackhawk style on jig hooks makes a very effective support for nymphs. Alternatively, foam beetles such as the Popeye (ESF #44) are great searching patterns, and provide all the buoyancy needed to support a beaded nymph in rough water. Emerger patterns using deer hair or looped CDC wings also work well with the wing tied along the jig angle as in the Blackhawk Down.

The pattern below is a March Brown or Large Dark Olive imitation I use in the early season in South Wales; a brown organza tail, a body of brown organza in open wraps over an olive thread body all topped off with an elk hair wing. In next month’s ESF I’ll show you how to tie my two favourite nymphs for fishing the duo with a jig hook dry fly. 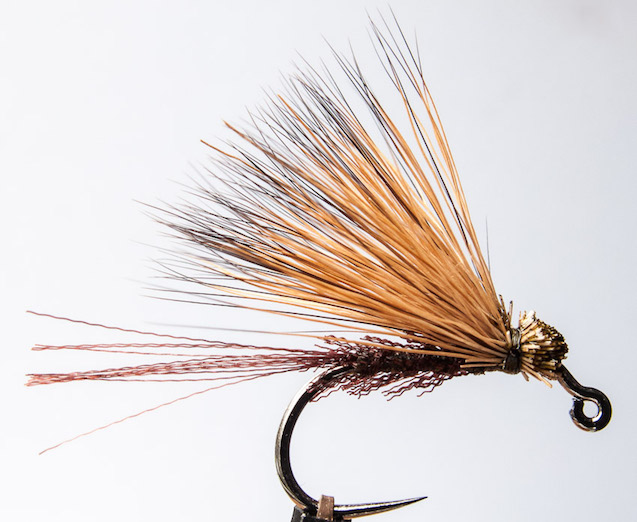