Pete Tyjas heads up-country in search of chalkstream trout and to catch up with a friend.

Toby slowed the car again as we went through yet another roadside puddle. We both knew it looked bad but we didn’t say anything.

The rain continued but we kept talking, mainly about fishing, as we got nearer to our destination.

Toby called Stuart who gave us directions to his house and met us when we arrived.

He has a fly tying room that I can only dream of. Not because of the contents of it (there is a lot!) but by the neatness of it all. I felt a little ashamed as I saw the neatly stacked hook boxes and the many packs of dubbing that were stored on racks on the wall. It was in stark contrast to the desk I have at home that is strewn with materials of the “work in progress” flies I tie after a thought I had that day on the river. 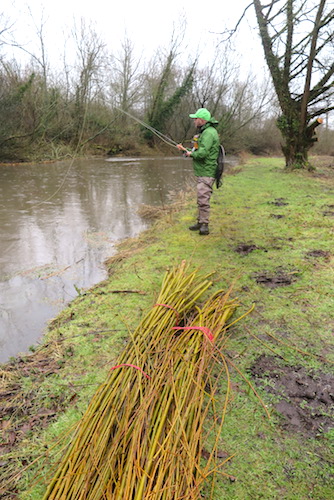 Mel, Stuart’s wife, had prepared us breakfast; a proper fry up that included some excellent black pudding. I had done my best to try and redecorate their dining room when I pricked a tomato with my fork only for it to explode on my plate covering my fleece, face and some of the table too. I quickly scanned the walls for any signs of tomato shrapnel. I was quietly saying to myself “please not on the wall, please not on the wall” I was lucky. Mel appeared with a cloth and I wiped up the carnage.

The drive to the river was a short one. It was one where we got to witness the extent of the deluge we’d been driving through and when we came to some roadworks that had now become a ford we had to pass through with care.

We parked, got out and saw the river. The pictures of the river I’d previously seen had been of crystal clear water and some of the nice trout that lived there. Today, we were greeted with an angry brown river that was pushing through at a frightening pace.

To be honest we all knew it was blown but you’ve got a chance if your fly is in the water right? 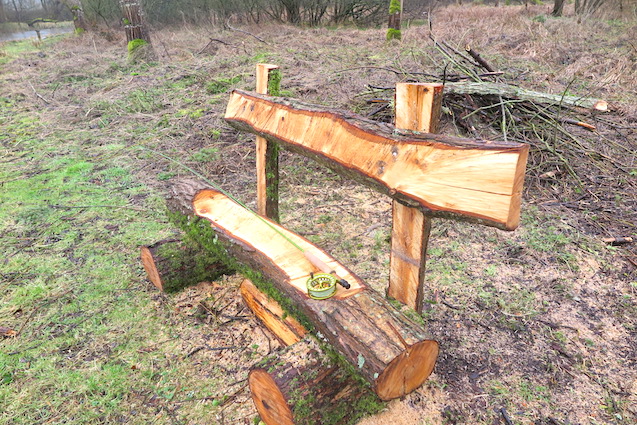 Just to make things even harder I’d decided to put a really big dry on and work any areas out of the main flow. Stuart probably thought I was a little mad as he and Toby set up nymph rigs but I was aching to cast a fly line, we walked downstream searching out a spot that might hold a fish.

Stuart showed us some of the work he’d been doing on the river over the years from improving the bank to the benches he’d skillfully made for a weary angler to rest on.

He guides on the water too and knows it like the back of his hand. From every pot hole to where the river shallows he knows it all. To me, this is what a guide should be like. Someone who is on the river a lot and knows every little mood and nuance that it has, not someone who turns up on the day and wings it. A guide should know their water, they are an expert on it and that is why people hire them. 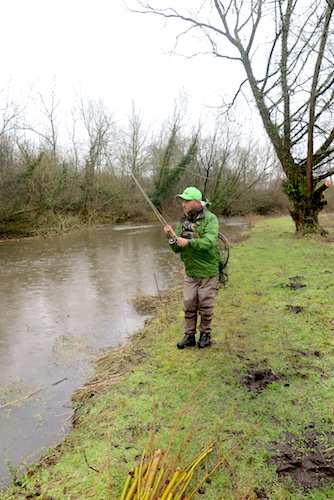 I made a few casts, it felt good. The fishing didn’t match but it really didn’t matter I was enjoying it and the slack water on the other bank I was targeting meant I had to work hard to get any sort of drift at all as soon as my line landed on the fast-paced water. Sometimes I would get a foot or two of drift, sometimes not but then there were occasions I could really work the fly down the slack water well. Well, I thought so but the trout were not interested.

We walked upstream and past the car, I succumbed and set up a nymphing rig but to be honest my heart wasn’t really in it until Stuart showed us a sweet hatch pool that screamed fish. I got to go first and felt my way into the pool and made some casts. I worked the seams of the faster water and any slack areas I could find. I had heavy bugs and made sure I gave them movement in the slower water. I lost some flies on a snag and Stuart took over. He knew where he wanted to fish and we sat and watched as he worked the water.

I really hoped for a picture of Stuart with a fish but even he had no success. We walked the water some more talking, swapping stories and fishing. 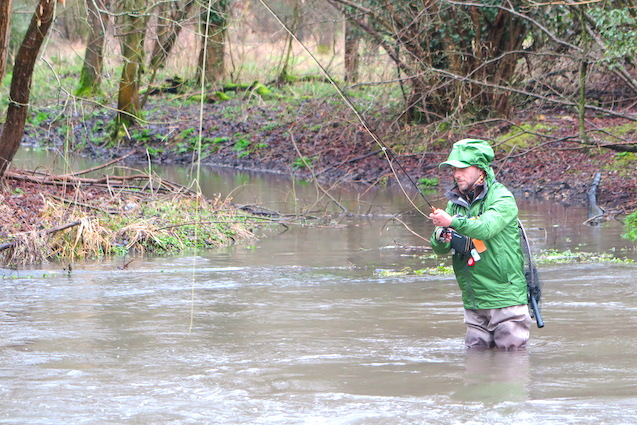 It looked as though the river was clearing a little but it was hard to tell. I think it was optimism-fuelled more than anything else.

We decided to call it a day and headed off for coffee. We had fought the good fight and had been beaten but I still enjoyed it, very much.

What I really wanted to do was to spend time with Stuart and see his river. The river he spends so many days on, making it better for anglers and the fish too. You can really feel his passion for the place as he proudly shows you work he has done over the years, more recently and the work he plans to do too.

He loves fishing, every second of it and every aspect of it too. I fished with him last year and we ended up talking for hours and fishing just a short section of river. It was one of my favourite days of fishing and proved again the success of a day is not measured by size or numbers of fish. It is about much more.

The thing I really love about Stuart is his modesty. He makes sure his guest is in the best spot and gently moves them or advises them without making them feel uncomfortable or embarrassed; another sign of a good guide. He ties stunning flies and is eager to give them to friends or guests. He really thinks about fishing, the approach, the cast, the drift and works on how he can make things better; not just for himself but to help others too. 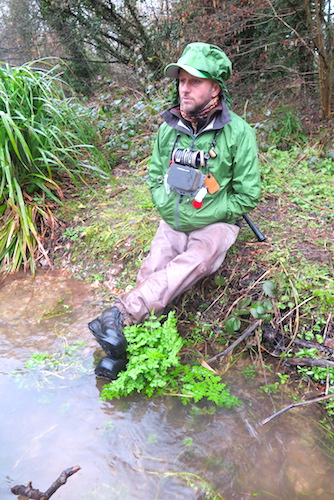 He is one of the good guys who is a pleasure to be around. This is against a background of someone dealing with an extreme and rare case of arthritis that means tying a fly is extremely difficult and holding a fly rod even more so. Stuart doesn’t moan though. He gets on with it and has adapted his fly casting so that he uses a 9ft rod like a short double handed one that allows him to send graceful loops of line across the water. All of the work he has done on the river is a testament to his skill, ingenuity and sheer doggedness not to be beaten and you’ll never hear him moan about anything. He just gets on with it.

I feel honoured to know Stuart and count him as a friend and hope to see his river one day again soon and spend some time with one of my fishing heroes.