Philip Bailey takes a look at how he fishes his wet flies.

Fly fishing is a funny pastime often subjected to its participants rapidly discarding long established methods in favour of new ideas. Ideas that are born from a desire to create something new and which we believe will be better than the past.

And so it has been with the old traditional ways of fishing small wet flies. How quickly we have discarded techniques which called for controlled searching of waters using wet flies designed with the intent of deceiving fish. Here I am talking about soft hackled flies. Yes there are still stalwarts amongst us who use nothing else, some who mix them in with their own personal approaches but many have discarded them entirely in preference to using weighted flies and even dry flies mixed with emerger patterns tied more like a dry fly. I don’t criticise anyone who seeks to develop their fishing techniques but I ask the question – “are we throwing the baby out with the bath water?”.

Tying and fishing soft hackled flies is having a resurgence with some recent high quality publications. Gosh, even I got on the bandwagon some years ago with self published small book on how to fish them and I admit that I loved tying and fishing them.

But like others, I stepped away from them once I started to develop an interest in the use of short rods and specialist casts based on the modern Italian style of fishing. This style was developed for fishing fishing dry flies in difficult situations.

But the call of soft hackles continually beckoned me and I began to think how I could converge my love of the Italian style with the love of soft hackled flies tied in the North Country Style. It was through this interest that I returned to Stewart’s ‘The Practical Angler’.

W.C. Stewart, a Scotsman living and fishing the Tweed and its tributaries, wrote The Practical Angler in 1857 (a later edition was released in 1905 by the publishers A & C Black) and perhaps became the first to describe in detail the methods used when fishing small soft hackled flies.

Nowadays we tend to describe soft hackled flies as ‘spiders’ lumping together all types of tying styles and patterns. This is a modern phenomenon to generalise or standardise things. But is there a difference? I believe so. Stewart didn’t name the style of flies that he used but he did coin the terminology of ‘spider’. Stewart's chapters on flies (chapter V) and how to fish them (chapter VI) are the most enlightening I have read and probably equal or exceed anything written since. It is within these chapters that he takes the effort to explain his techniques (and he even takes Francis Francis on – true Scottish spirit). 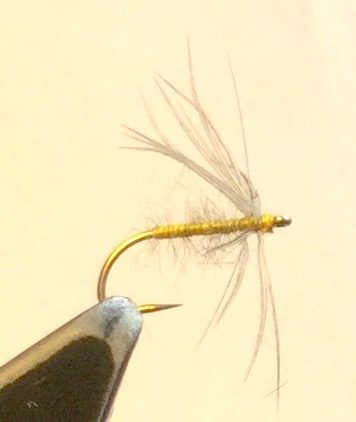 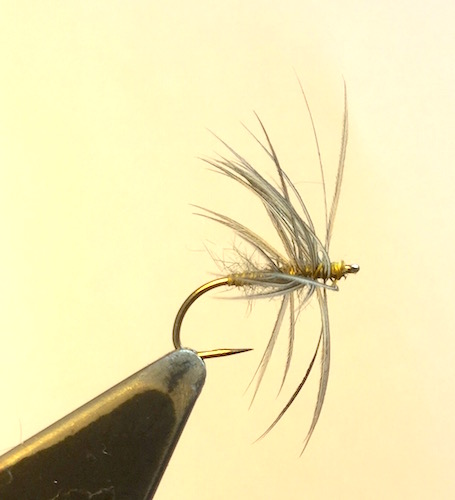 “There is the winged fly, which alone, properly speaking, merits appellation; and there is the palmer hackle, or spider, by which we call it, believing that if it resembles anything in the insect tribe, it is a spider”. There you have it. From that point forward Stewart called these small palmered flies ‘spiders. But he did not originate them, James Baillie did. He was a professional fisherman, so imagine the thinking and testing that must have gone on during his days of catching trout for a living in order to move from a traditional hackled fly to a palmered pattern. The point here is that Stewart’s spiders contained a palmered hackle technique something which did not feature in North Country, Clyde or even Tummel flies. I don’t know about you but I prefer to keep the terminology pure and call them for what they are – North Country style, Clyde style, Tummel style and Stewart style (aka Spiders).

Sorry for the digression but I am glad that I have got that off my chest. It was within these two chapters that I began to develop my technique of using soft hackles with a short rod (and I am talking 7’6”), fast tight loops and a variety of casts that got the flies into difficult situations or achieved a drag free drift in the Italian style.

Stewart talks about three valuable things when describing his style. Firstly, he advocates a light, stiff rod of about 10’. This was at a time when rods were much longer and 30 years before Webster advocated the use of a long rod for his ‘looped line’ technique. A stiff rod enabled him to abruptly stop the cast in order for the “flies to fall first on the water”. Exactly what we want to achieve with the Italian style. He only fished a cast made up of three flies and with “droppers from two and a half to three inches” to avoid tangling when using a stiffer rod and faster casting. Now I had an answer to being able to use more than a single fly when casting in the Italian style. And finally he advises to cast upstream, with short accurate casts, allowing the flies to only drift a short distance and with the least amount of drag as possible. He also goes on to describe how to cover the water. All in harmony with what is trying to be  achieved with the Italian style.

Armed with these insights, my experiences using multiple flies and short droppers and the skills acquired through becoming an instructor in the Italian style where a short rod, light lines, high speed casts and a long leader is used, I set out trying to work out how I could again fish multiple soft hackles with Italian style techniques.

Eighteen months down that journey I think I have it sorted. I can now again fish two soft hackles (three is a step too far for this style)  working all of the pocket water, creases, back eddies and riffles where these flies are so effective.

So what have I changed? Not too much really, just better understanding of the leader design and dropper length. Oh, and reducing the number of droppers to a single dropper. The most fundamental change has been the dropper length, now kept to no more than 4cm and using an extension of the old ‘dropper’ knot.. This means I don’t have to rebuild the tippet section of my leader each time I want to change the dropper fly but as Stewart says “We believe the angler who has a different fly for every day in the season will kill as nearly as many trout as the angler who adheres to three or four varieties the whole season through; but he is proceeding upon an erroneous principle, and losing both labour and time”. So I don’t change my dropper too much.

For those interested, here is my leader set up:- butt = 135cm of .50mm, 1st section = 67cm of .40mm, 2nd section = 45cm of .30mm, 3rd section = 23cm of .20mm, tippet 1m. I tie the butt and first two sections in Maxima Chameleon, the third section in a clear tippet material which has a very small perfection loop at the end. I use three turn blood knots on all connections except for the last which is a 4 turn blood knot. The small Perfection Loop allows me to change the tippet without reducing that sections length. You could use a micro ring which I originally used but have discarded. For the tippet I use fluorocarbon, 1 m of 5x or 6x using and I place the dropper 50cm from the point. I attach the tippet to the perfection loop using a clinch knot. To attach the point fly I use a Davy Knot.

But as I said the real difference is the dropper. In old books there are various explanations of attaching droppers to a leader. These hark back to the days when gut was used. One which struck my eye and prompted my thinking was the development of a small loop in the leader to which a dropper was attached. The question that I asked was “could I do this in a way that produced a short dropper and if so would the double thickness allow the dropper and the fly to reduce tangles?”. It is a little fiddly but it sure works and the extra stiffness does not impede the action of the fly. To attach the fly I simply thread the dropper through the eye and double it over behind the eye. But a warning. I have found the thickness difficult to get through hook eyes so I simply push a piece of tippet through the eye, then through the loop and back through the eye and then pull the whole lot through.

Diagram to form the dropper loop taken from an old book. 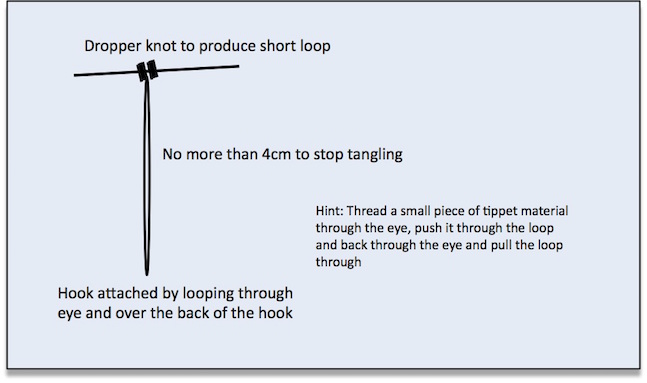 What I am trying to achieve.

I have tried longer and shorter leaders but this set up now works extremely well for my new style. Longer I get tangles, shorter I don’t get a natural drift. You might also think the section lengths a little pedantic but it works for me.

Do I get tangles? The truth is I do, but not more than I got when fishing a longer rod, with three flies and longer droppers. Multiple flies are always going to tangle. But my catch rate has increased as I fish these wonderful lightly dressed flies with a renewed intensity and keenness, short casting with accuracy and getting two flies in under bushes, dangling tantalising in pockets and eddies and slipping along in the currents without any drag.

In part 2 I will discuss how I now fish North Country Flies and ‘Spiders’.