We're thrilled to have Peter Anderson back this month who has been hitting the road in search of trout.

I collect rivers. I love to fish a new water, to stumble across delightful little pools, gravelly runs and dark, deep swirling eddies. Fishing a water regularly, one knows what to expect when approaching each bit of the river but with a new river it is all a mystery. And you never know, sometimes you look at a piece of water certain that it will hold fish but if it does, they elude you. Other times an unlikely looking rush of shallow water produces a cracker. The problem is, of course, finding new waters to fish. I live in Hampshire and don’t like chalkstreams (except for grayling in the winter) which is just as well because day tickets here range from £150 upwards, to catch stockie trout in clinically manicured surroundings.  No thanks.  So fishing auctions are a godsend, they allow me to access waters otherwise unavailable and, joy, they are waters I want to fish! The Wild Trout Trust auction is the biggest but there are several others. The main problem is controlling enthusiasm during the bidding – you can (and I did) end up much poorer than intended! 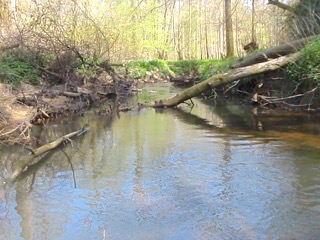 So it was that in early May I found myself knocking on the door of Andy Thomas, Conservation Officer for the Wild Trout Trust who had offered a day on the Rother which I had won (at the third time of asking, I might add. I was heavily outbid in previous years). Until recently the only Rother I had heard of flowed through Rotherham, this one was in Hampshire and it wasn’t a chalkstream, rising as it does on greensand. No manicured banks, no fat stockies.  It was wild. It was also a fair trek in, through a wood and down a steep hill (which would have to be climbed on the way out) but the reward was utter tranquillity. No traffic noise, no footpaths, no dogs, not even any livestock. And deep in the valley, a stream. It wasn’t a river, that would be too grand a way to describe it. A stream and a beautiful one at that. A typical lowland stream too; bendy, deep corner pools, plenty of woody debris in the water. I used to fish Box Brook near Bath which is similar, I felt completely at home. 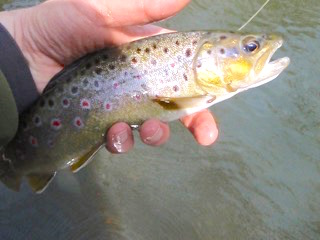 Now I’m not bad at this fishing lark, but I’m no expert and I quickly go to pieces if somebody is watching me. Happily Andy was willing to point me in the right direction and leave me to my own devices whilst he went further downstream of me to fish himself – win:win so far as I was concerned.

I sat on the bank (actually I crouched down, fell over then rearranged myself in a sitting position trying to look as though that was what I intended all along) then slid into the river. Nothing was rising but I decided to start with the duo and worked upstream picking out the slightly deeper bits of river where I figured that the fish would be holding. And it was bliss. Plenty of birdlife (including a blackcap on a branch 5 yards away), lovely warm sunshine, peace and quiet……but no fish! It was still pretty early in the season and Andy had said that the river hadn’t woken up yet, much the same story as on my club water on the Lambourn where things had been slow. After 45 minutes of so the dry dipped under and I had a lovely little wild fish on the hare’s ear nymph.  Fish caught, pressure off. 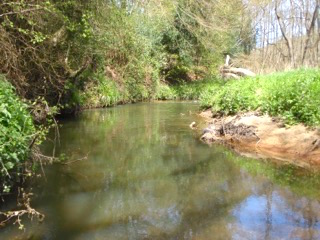 The duo hadn’t brought any fish up so I decided to get rid of the dry and just fish the nymph. Things got better. The sport was never frenetic, in fact it barely reached medium pace, but fish came steadily enough. Most were small, a couple were around half a pound.

I was very happy. 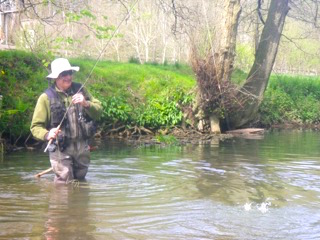 As an aside, I was involved in a clash of cultures at a club AGM recently. The secretary mentioned that I had caught the most fish in 1 day, 45. In fact I was accompanied by a guest, a former Welsh international no less, and we shared the bag. The view generally was that most of these were “undersized” and shouldn’t be counted. I stressed that they were wild and most certainly should be counted. This saddens me, too many clubs stock their rivers and too many anglers prefer to catch a fat, tame stockie rather than a beautiful, small, elusive wildie. One day maybe common sense will prevail.

So a wonderful day on a new river in excellent company and some wild fish to boot. Worth every penny and all in a good cause!