Pete Tyjas makes a road trip in the company of good friends.

I grabbed Duncan's arm and he hauled me out of the river. It was a symbolic sort of moment and summed up perfectly how I feel about my fishing friends. 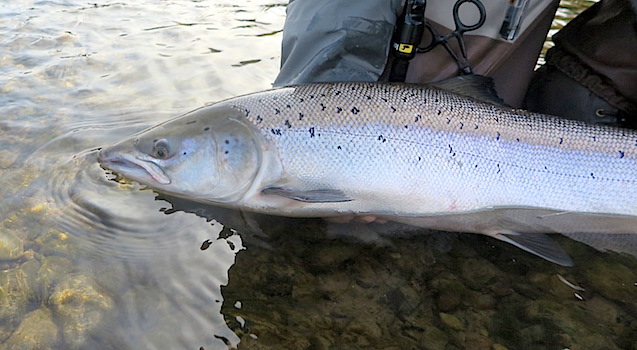 We were on the road. The location isn’t important, no, what is important is the people I am away with. They are friends, good friends. People I talk to about fishing but also a lot of other things too. People I seek council from when things might not be so good and people I share the good times with too.

Events of the last year has made me look at things differently. I look at everything through new eyes. I feel almost as if I am at ground zero again and enjoy every little experience on the river from the wildlife to the beautiful wild brown trout I so love to fish for. 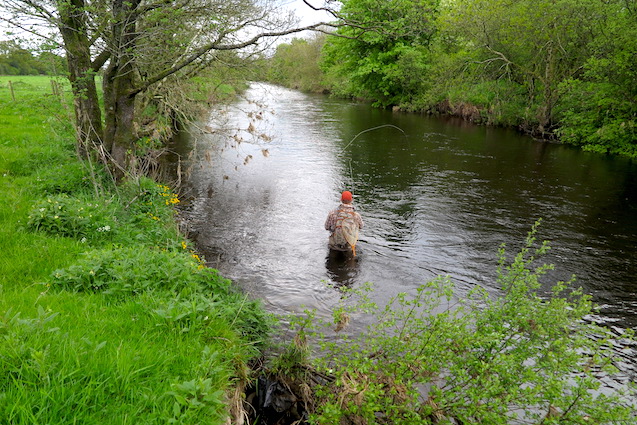 I sometimes worry I didn’t look at things the same way previously but think I did. Infact, I am sure I did but now, every little experience is just a little more heightened and a little sweeter.

I used to gently chide myself when my fly got hung up in a tree. I don’t any more. I laugh. It is good to laugh.

Since I met up with the guys on this trip I have done a lot of it, laughing. We camped together on Dartmoor last year and it was the same. Some fishing, drinking, laughing, gentle ribbing, amusing anecdotes and some more fishing. 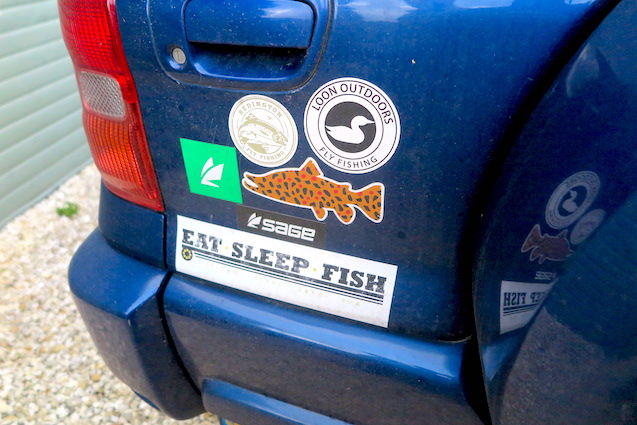 We all fish in a relatively similar fashion, staking out a spot and waiting for a fish to rise. When it does, we carefully creep into position make a cast a hold our breath.

The fish on this river take differently from the trout in the Westcountry. Slow, deliberate rises that mean you have to wait before setting the hook. This is in stark contrast to the rapid lunges that we experience back home. 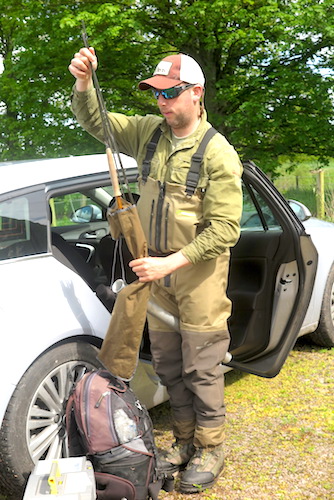 I hear Toby’s phone ping. I know this must be a fish for one of the guys. I am not a Facebook user so am not on the group they use to keep in touch with each other. I know this is a source of mild frustration for the rest of the guys when planning events like this trip but they indulge my old fashioned style of communication most of the time.

I sit and pick at a sandwich while I watch Toby cast to a rising fish. It is a tough cast that needs a thoughtful and challenging amount of slack to allow the fly to drift naturally over the fish. It takes a couple of casts but I watch him set on a fish, a large one. I net it for him and take some photos. This is a fine fish and is well earnt. 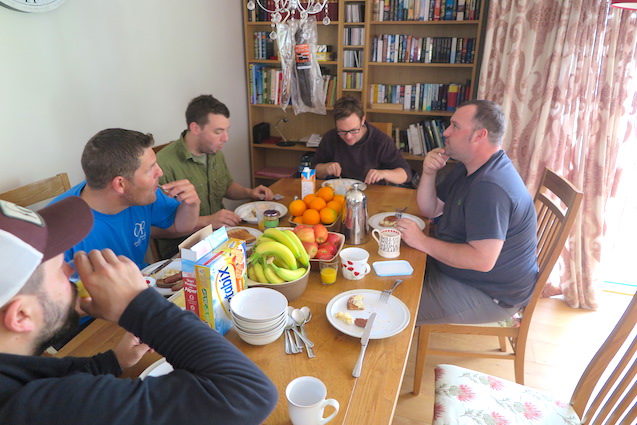 The rain starts to fall lightly at first but getting heavier as every minute passes. We seek shelter in a hut talking and eating sweets. We have seen some fish rising and have let Duncan know. He turns up wet as his jacket was in the car. It doesn’t bother him as just carries on fishing. We watch him stalk a fish and hook it.

The rain has brought the river up and the salmon angler in me fights to get out. I have a fish roll on my fly the next day but that is as near as I get on this part of the trip. I had been lucky on the way up when Toby had pulled in a favour and got us on a river that had some salmon running it. The gods were on my side and I caught one. 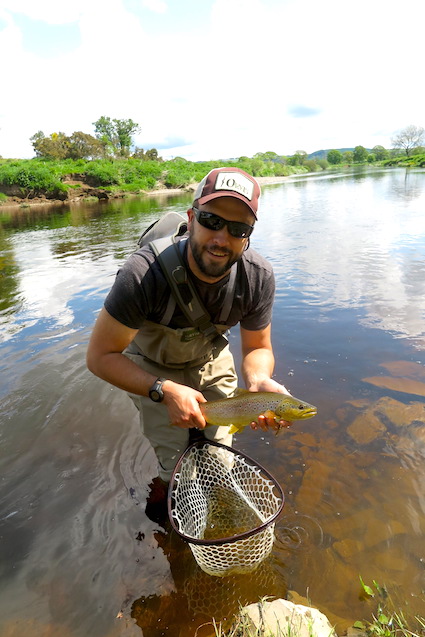 We’d watched otters in a pool the next morning. We all stopped and watched for what seemed a long time. We could have said something nice about the scene and moved on to the business of fishing but we didn’t. We watched in silence.

Tom and I pick our way across a rapid flow to cast a fly to a rising fish in a slack spot just off the inside bank. The fly hits its target and the fish takes. Tom sets and we start to make our way back across the flow again. Where we have been stationary the gravel underfoot has become loose and we struggle a little to get moving. I imagine I must look like one of Michael Flatley's entourage as I try to gain some traction and river dance, literally, to the other bank. 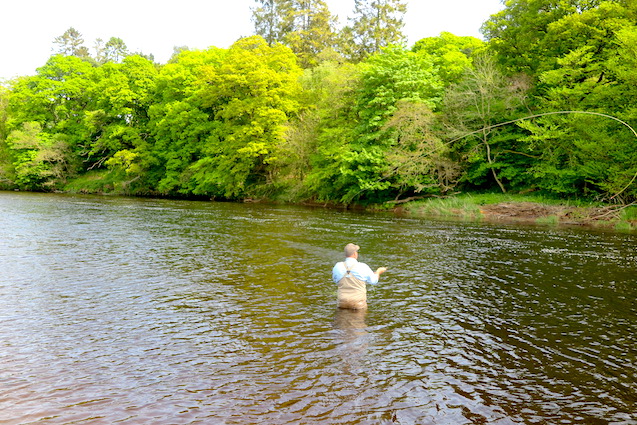 Tobes has seen a salmon move just a little upstream from where Tom and I are and lets us know. I meet him and am soon casting a fly into the spot where Tobes has seen the fish. I cover it a number of times altering my swing each time and fly pattern too. It doesn’t work and I watch as Duncan has a go. He hasn’t picked up a double handed rod for a while but the line is soon travelling over the water in a graceful loop. We are all hoping the same, “take fish, take” but it doesn’t.

The next morning dawns bright. We pack the cars and someone spots a small pike resting in the shallows of the loch that the house we are staying in overlooks. Toby quickly grabs a rod and makes a cast that looks sure to hook the fish but despite the pin point accuracy the fish heads off into deeper water. Toby and I are in no rush and take it in turns to try the deeper water for the pike. The 4wt rod we have strains under the weight of the fly but I get hit on a fast strip of the fly and next cast the pike is on. Toby matches this in the evening with a bigger pike still. 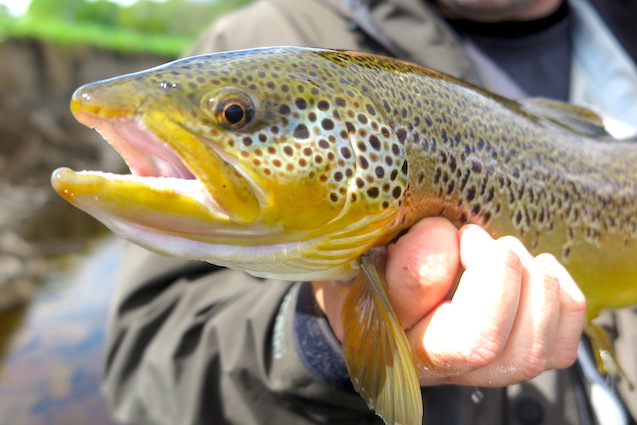 The river looked perfect for salmon and the pool had a hut. I take the positioning of huts on pools as signs that it must be a good spot. It is the sort of pool I’d happily fish all season and start to swing my flies. Toby jumps in behind me with a nymph rod and hooks a sizeable grayling that comes off at the last moments of the fight.

I hear his phone ping again and am thrilled to hear Howard has caught a grayling a shade under 3 lbs.

The day is bright but we have started later and intend to fish later in the hope of a spinner fall. I have seen a salmon move in a hard to reach spot just downstream from me. I offer my rod to Toby to try. I quickly change the fly as I have cast to it a couple of times. I am waiting for the water to explode as the fish is hooked but not this time.

It doesn’t really matter; there will be other times, other trips and I hope in the company of the anglers I am privileged to call my friends.