Missing a day on the water because you are stuck behind your desk isn’t my idea of fun. Especially not when your buddies are having the fishing day to end all fishing days. Fortunately there is WhatsApp..

It just happens too often that I have to decline a fishing invitation from my buddy Floris. My place in his boat is quickly filled by another fishing mate. So when I had work obligations our mutual friend Rob stepped aboard Floris’ Buster for a day on the water. 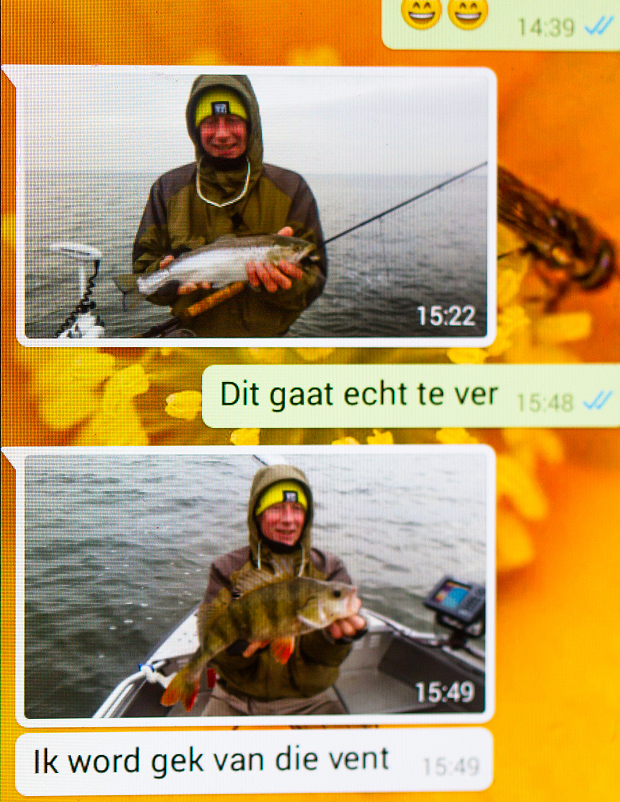 The Southern estuary in The Netherlands is a vast body of water. If you want to be successful here, you will have to know where to find the fish. Floris practically lives here. The many hours he spends in locating spots and timing them right, are paying off in spectacular catches. The area is fast becoming ‘world’ famous because of the record size perch that are caught here. Nowhere in the world can you have a better shot at a six pound plus perch. On a fly rod..

I think it is 9 am when I hear the familiar sound of an incoming WhatsApp-message. Rob sends me a photo: Floris with a big zander, one flaw though: there is a shad in its jaws. “Vertical jigging?”, is my response. “Yup, searching for fish.” Less than ten minutes later, there is that pling again.  And again it is a trophy shot, this time of Rob with a wide grin on his face, a fly rod and a decent pike. “Bloody hard bite on the slider”, is his undercooled caption. “Sort of an anti-climax”, he goes on. “I thought I hooked a super-perch.”

“All you need now is a perch”, I say to Rob. “Would be nice, but my day is already very good.” I agree and I must say that I feel like being the fly on the wall with this real time WhatsApp-messaging. 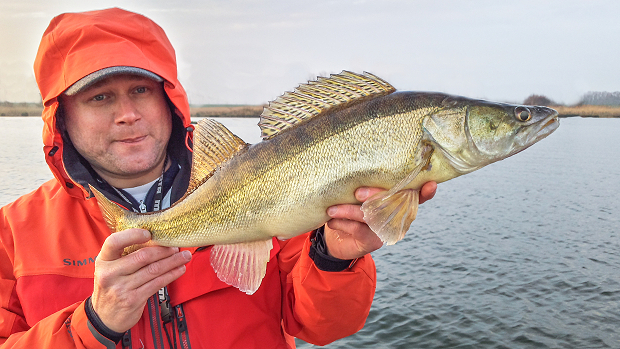 I have closed my laptop and grabbed a fly rod. All those pictures have given my casting arm an itch. As I am swimming a streamer in one of the small harbours near my home, I hear the sound of an incoming message. Another zander on the fly rod. Floris adds that Rob is on a roll. And again I feel like being part of the team.

As I am in my backcast, yet another message appears. An even smugger Rob holding up the fish that has made this area famous: a fat perch, well over forty centimetres, the slider firmly attached. I am blanking out, but I am smiling. Sharing a fishing mate’s fortune is just as good as hooking a fish yourself. 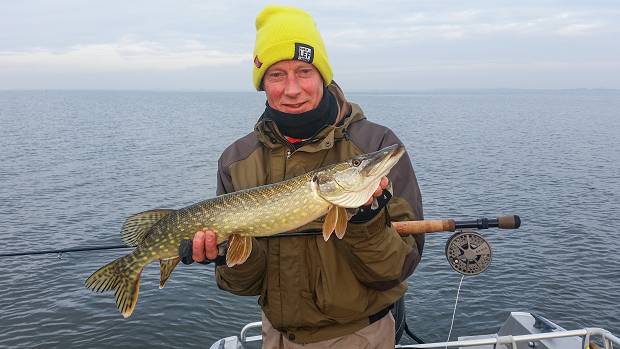 “if you were one of those American skippers, you know, the ones who call themselves Captain, you’d be having a genuine grand slam”, I am telling Floris when he calls me for an update. “All that lacks is an asp”, I say, “and you have turned it into a super slam.” 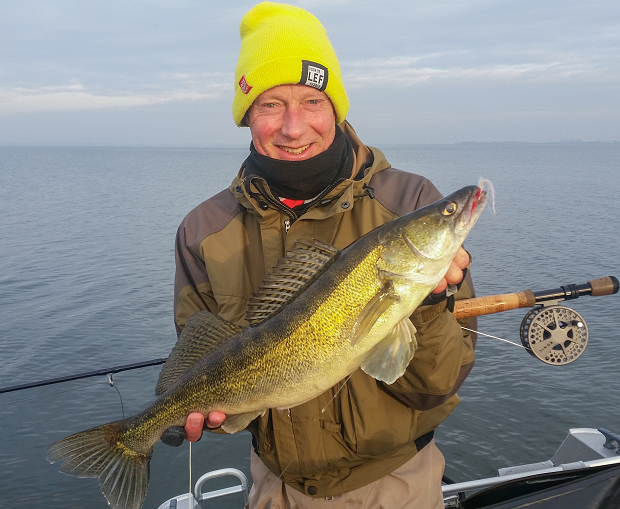 “When Rob sends me a photo of a very fat ide that has taken Floris’ fly”, I am getting a ‘sky is the limit’-feeling. How I would have loved to have been part of this trip. If only to see my buddy Rob fishing, he displays some awesome form. And, as will be clear, he has by no means finished.

I have packed my rod and am on my way home, as a new message ‘pings’ in. While driving I am trying to pick a glance of the picture. No, that can’t be right, can it? They are pulling my leg now. Old pic of Rob probably? As I park my car at the side of the road my suspicion is confirmed. Beneath a record breaking smug grin, Rob shows a silver sea trout. A sea trout in our freshwater, that is a very serious crown on his day. How are we going to call a slam like that? 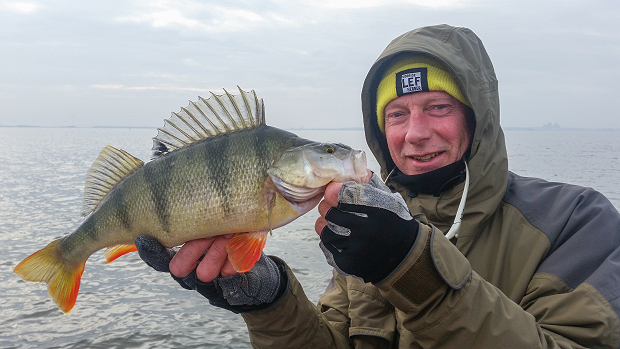 The perch and zander that follow, are welcome encores to a glorious fishing day, that I was honoured to be part of, be it by phone. A fishing day that only through a combination of the right setting, excellent boat handling, and very accurate fishing, became a great success. Because even on the best day, the fish don’t jump on board by themselves. It takes local knowledge and the skills to make use the material just in the right way. If you ask Floris and Rob, it was the right fly on the right moment, fished at the right depth at the right speed, that brought in the fish. 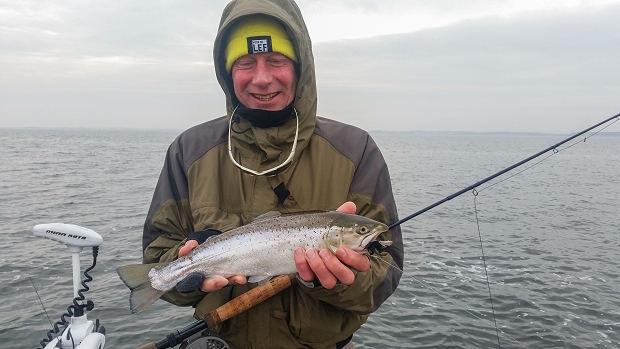 For years now, we have been experimenting with lines and shooting heads to create the ideal combination that catches fish. A combination that stretches from a driving line to a slow intermediate that sinks under 1.5” a second, to a line that sinks twice as fast, all the way to a very fast sinking line. And if in the spur of the moment we need more depth, we carry short pieces of tungsten coated level line that we can loop between the fly line and leader. 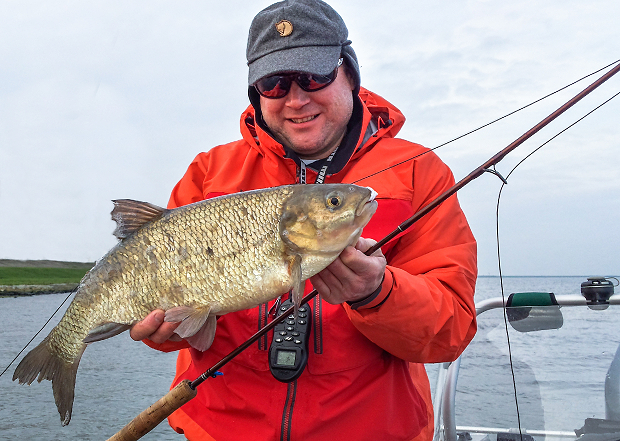 Everything on a slider 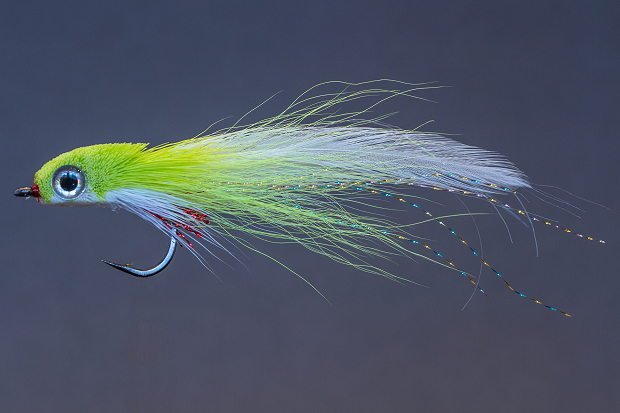 In this magazine I have raved before about Floris’ deerhair work, so I’ll keep this short. But I will have to mention his sliders, as they were the stars of the day. No less than five species of predatory fish couldn’t resist a slider. According to Floris, the secret of this fly lies in its all-round character. You can fish it fast, slow and even static. There is no soft plastic or hard bodied lure that even comes close. So it is not more than logical that a slider made this memorable super slam possible.