Have you heard of the  (Kris) Kent curse? Read on at your peril

This isn’t what my, now ex, wife used to say to me in bed; I have nothing to be embarrassed about in that regard, but a quote from a recent trip with David Southall to the upper Yorkshire Derwent. David is the only man who’s ever asked for a photo of my “12 incher”, but that’s another story.

As anglers I’m sure you’ve all heard that phrase “you should have been here yesterday” or “you should have been here last week”. It’s usually a precursor to a poor day’s fishing and your friend or guides best effort to soften the blow. I’m an angler who’s heard this phrase more than most as I seem to be very unlucky when it comes to fishing trips and the weather. Former Grayling Society Chairman and professional guide Steve Rhodes calls it the ‘Kent Curse’.

My day on the upper Yorkshire Derwent with David Southall is a good example. The moment I agreed the date in the diary with David it stopped raining in the North East of England so that by the time I arrived the rivers were on their knees. I picked David up and we drove north from his home to the upper Derwent. It was a thirty minute drive and David was already starting to manage my expectations. We parked up, pulled on waders, strung up rods and headed for the river. It was a long walk in that gave David further opportunity to manage my expectations. As the river came into sight for the first time it was clearly low and sluggish. David’s first words were “we could do with another six inches of water”.  That wasn’t the last time I heard him say that that day. 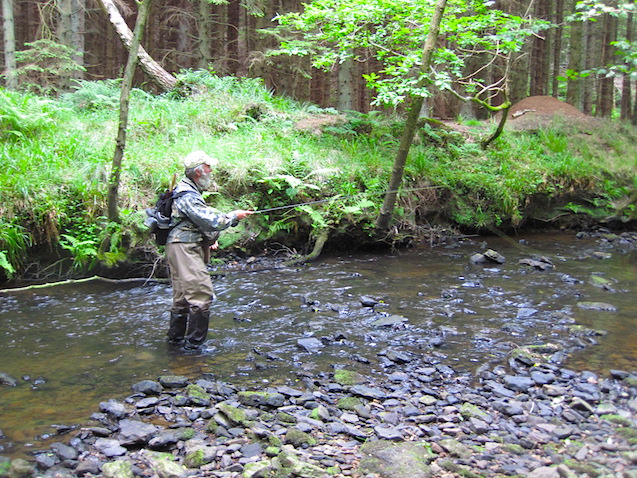 I first became aware of the Kent Curse in 2004.  I had been living as an expat in Denmark for three years and it was time to head back to the UK. I decided to use some of the airline loyalty points I’d accumulated to go fishing in northern Sweden. I flew to Stockholm and then on to Luleå where I spent the night before the helicopter flight into the camp at Miekak. From the air the myriad of lakes and rivers that punctuate this arctic landscape looked beautiful, from the ground they looked a little different. The camp manager explained that it had been one of the wettest summers on record. The main rivers were unfishable raging torrents. The pontoon for the boats was below the surface of the lake. As he showed me around the camp he said “you should have been here last summer, it was a great season”. When you’ve travelled this far and the next helicopter out isn’t for another week you ‘make do and mend’. I fished the outflows from the lakes above the raging torrents and the short channels connecting the lakes. I fished the small streams that criss-crossed the bogs, I even fished the deep pools below waterfalls. And I did catch fish.  Mostly small grayling and a few char, but they were fish. 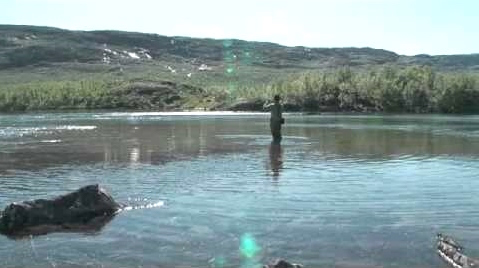 A few years later I returned to arctic Sweden convinced that lightning couldn’t strike twice. It didn’t.  That year was one of the driest on record and the rivers were very low. But we did catch fish and it certainly made the wading a whole lot easier.

Steve Rhodes coined the phrase ‘Kent Curse’ after our second trip to Malham Tarn. Each time we went the weather forecast would be perfect, overcast with a light breeze and cool. The sort of weather that would have the wild brownies rolling through the waves to our flies. Each time as we arrived it would happen; the Kent Curse. On the first visit the skies cleared revealing a hot sun and the breeze died away leaving a flat calm. We scratched around and ended the day with two small trout. On the second visit the wind died away and a mist descended, we managed three small perch for our efforts. I didn’t have the heart to tell Steve that on my first ever visit to Malham Tarn my boat partner and I were blown off without even casting a line. 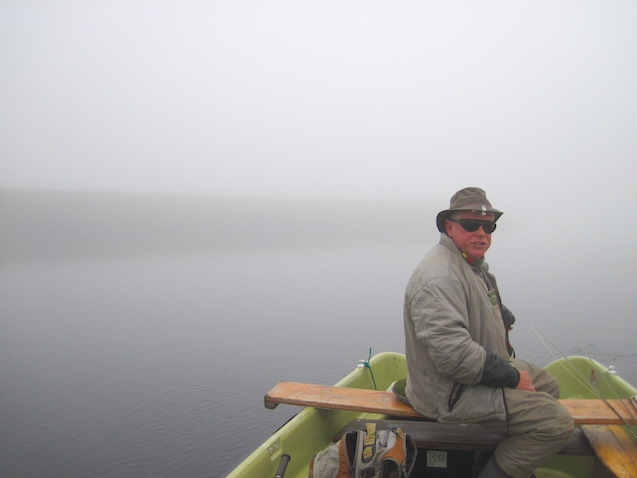 Steve was convinced of the Kent Curse after a visit to fish the Aire. Steve had work and family commitments that particular weekend and couldn’t come fishing, so I fished alone, but he said to drop by on my way home on the Sunday for a cuppa. I arrived on the Friday afternoon and decided to try and get a few hours on the river before supper. It had been raining heavily the previous day and the river was high and a little coloured. Nothing much was hatching but a fly cast into likely spots accounted for four small wild brown trout before the light faded. It rained overnight and I found the Aire still high and coloured on the Saturday morning. A few olives were coming off and fish rose here and there. I worked hard that day for ten beautiful brown trout, despite conditions. But it had stopped raining and the river was dropping and clearing as I left it for my dinner. Sunday looked promising. I rang Steve on my way back to the hotel and he was very optimistic for the Sunday. I headed a little further up river on the Sunday and was rewarded by six lovely fish.  All were seen rising to olives, targeted and caught on dry fly. Perfect. And then it happened. I had reached the top of the beat so I started to walk back downstream with a view to covering a few lies where I missed fish on the first pass. I had nearly reached the bridge at the bottom of the beat when the river suddenly rose a foot and went the colour and consistency of Brown Windsor soup. I  was dumfounded. The skies were clear and bright and there hadn’t been any rain all day. Where had this spate come from? I rang Steve to tell him I’d been washed off the river. He couldn’t believe it. He was downstream at Gargrave and the river was low and clear there. He jumped in the car to come and see for himself and he couldn’t believe it when he saw the river. Surefire evidence of the Kent Curse. A few days later he sent me an email with a screen shot from the Environment Agency's river levels website for the Aire. The river level ran horizontal throughout Sunday morning until 14.00 when the line suddenly and inexplicably went vertical. We never did find out why. 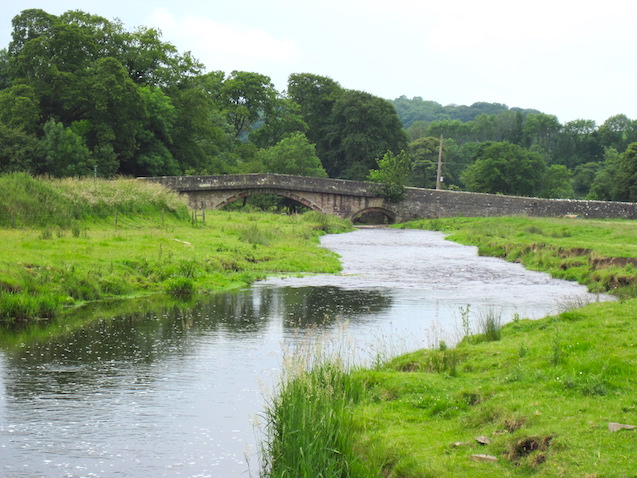 Photo of River Aire before the mystery spate

I think Steve thinks it’s something personal, the Kent Curse, as it often occurs when he’s with me. At the 2013 Grayling Society Symposium and AGM in Pickering the weather was lovely throughout the Saturday whilst we were in the hotel. We all had fishing arranged for the Sunday. As we had dinner on the Saturday night the heavens opened and the rain descended. It didn’t wash us off the rivers, well most of us, but it was most unwelcome.

However I can reassure Steve that the Kent Curse does strike when he’s not around. Charles invited me to fish with him on the Loddon a few weeks back. When I left home the skies were clear and it was a slightly muggy 24⁰c. As neared the river a thunder storm of biblical proportions reared up before me.  In seconds huge puddles spread across the road. By the time I had parked up the storm had passed, but the temperature had dropped 10⁰c. It was suddenly distinctly chilly and I hadn’t packed a fleece or a jacket. Charles and I wandered down to the river and found it in good fettle. Low and clear. We fished for an hour or two and caught a few fish. Charles wanted to go and try a beat higher up the river before he headed home so we retired to the cars and made our way along the rough track to the beat in question. It’s a fair stroll to get to the bridge and the bottom of the beat.  We stood on the bridge and looked down into the river. You wouldn’t have believed it was the same river. It was high and dirty and barrelling along. In the time it had taken us to relocate, the storm water from earlier had worked its way through the drains of Basingstoke into and down through the Loddon. A worm might have been successful but that’s definitely not in the syndicate rules.

So next time you’re planning a fishing trip perhaps you had better check with me first. If I’m due to be in the area you might want to change your plans.  You wouldn’t want to suffer the Kent Curse.