Richard Lane finds the river he'd travelled so far to fish is barely fishable, what does he do?

After a drive of over 450 miles the last thing that you wish to find is a river on its knees, a bare boned skeleton of its usual former self. Yet that was what I had arrived to find waiting for me and I was sat staring at a barely discernible trickle of water in a place where I would usually expect at least a foot or so of flowing water and a chance of casting a fly to a unsuspecting rising wild trout. 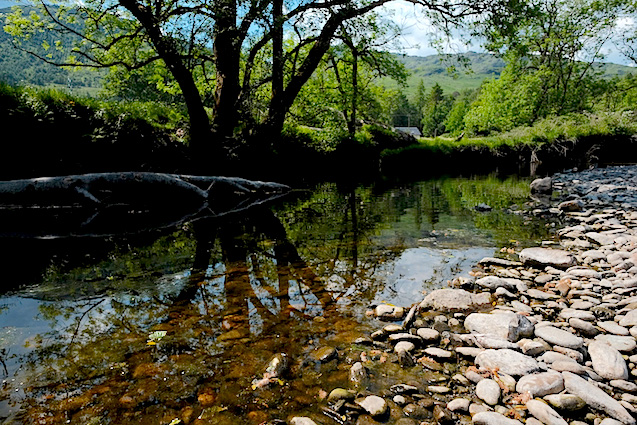 The evening's onslaught of midges didn’t help matters either but onwards I went picking my way upstream following what remained of the river and noting all the normally hidden features and filing all this valuable information away for future reference.

I disturbed a good sized eel which was hidden in a tiny pool of water by a rock which barely covered its back ,the 2ft of writhing muscle slipped away to find itself another hidey hole. Eventually amongst the boulders and dried river bed I came upon a pool of water , no more than eight inches or so but sure enough as I watched I spotted what I always look out for in these conditions . Not as some may think for actual fish but for the shadows cast by a fish. See the shadows, see the fish; a lesson etched in my memory from a young age. Trout and indeed other species of fish and any animal that relies on camouflage may very well blend perfectly into its surroundings but the shadow will always do its own thing and eventually give the game away to any watching and attentive eyes. 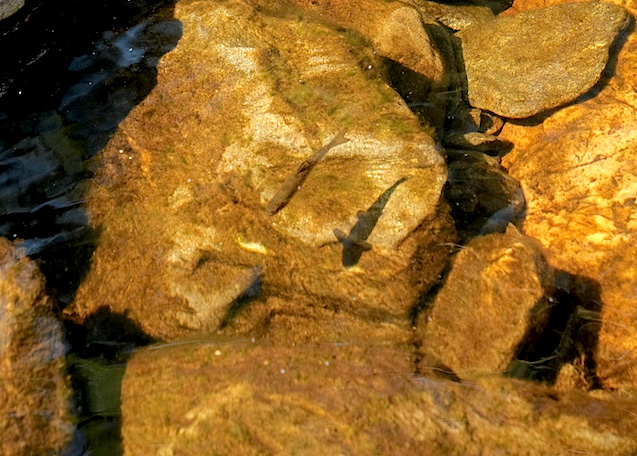 Once spotted I just watched, observing as a group of brown trout jostled for the best position in the tiny pool and taking passing items of interest carried to them in the flow with great gusto. I didn’t cast a fly for these fish instead deciding to watch,  learn and enjoy just observing these hardy little fish going about their daily business of survival.

This trip was always meant to be a short sharp shock of fresh highland  air and more about exploration and was never intended to be an all out angling trip. As a result I was snatching small windows of  down time and using it more as a fact finding trip for any future return visits. This wasn’t a problem,  for though having always placed more emphasis on time spent in observation unencumbered by any fishing gear  you can concentrate fully on just watching and learning from what both the fish and the environment is telling you . Time spent like this will always pay off in great dividends when you return armed and ready, rod and line in hand. 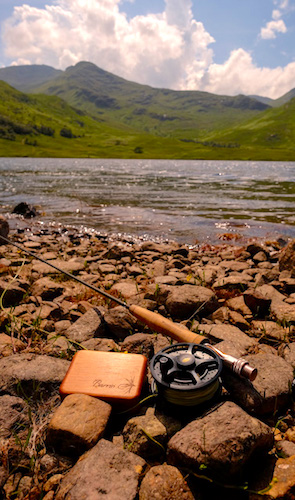 Anyway I digress as the next afternoon finds me turning away from the white sandy beaches near Arisaig looking out towards the Isle of Eigg having just watched the tide turn and the shallows come to life with baby turbot, wrasse and a small shoal of sandeels being pursued by a small gang of pollack.

Now though I was bound for a loch that I had passed yesterday evening, noting a few rises as I had driven along the road that skirted close to its edge in places. Time was of the essence as I had just over an hour before we were south bound again for the night's campsite. 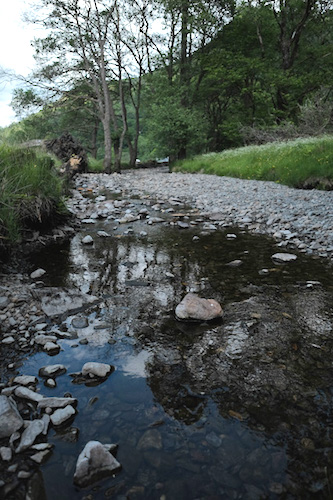 The wind which had been hacking down the valley causing white waves to form on the  loch's surface had now been replaced by a flat calm mirror-like surface with barely a breath of wind and the bright evening sun beating down. I made my way to a point 10 feet from the water's edge and crouched down watching, waiting and listening. After a while a disturbance in the edge as a trout took an insect noisily from the surface saw me sending my dry fly to rest in the rings that remained and a lightning-fast take of a typical highland brown trout saw me lift into the culprit as a nice fish cartwheeled and somersaulted  out of the loch in its bid for freedom. Three more brown trout later and mission accomplished it was back on the road bound for the night's camp once more.

The next evening once again finds me thankfully, in slightly cooler conditions than the previous day, perched on a rock, rod in hand waiting for a trout to rise and being slowly devoured by what feels like the entire midge population of the highlands but I was concentrating now as I had heard a rise earlier and I was waiting for the culprit to give its position away again. 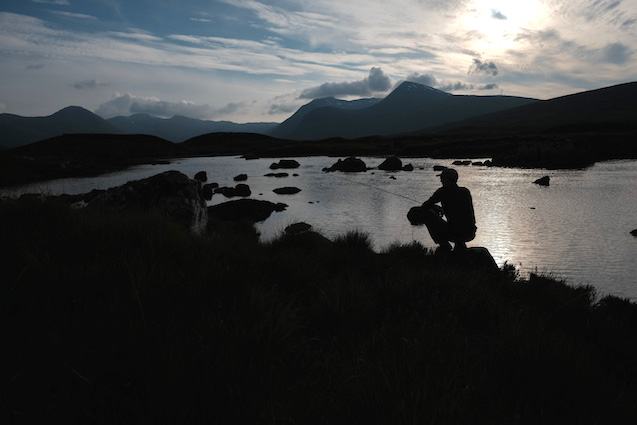 As I scanned the water searching for the tell-tale give away shadows of trout, I spotted what I was looking for. Brown trout, two of them, holding station almost invisible but yet again given away by the shadows on the rocks two feet below them. Sending my fly to land just ahead of where they were stationed saw both fish rush towards it, the victor of this race was soon being admired and slipped gently back to its hard life amongst its watery home.

The evening played out in this now familiar and seemingly well-rehearsed play as I perched by the water's edge looking for shadows and listening for the rise of a trout.