Henry Somerton-Cole examines how fly fishing is portrayed. It got us talking when we first read it and hope it provokes a similar debate.

All art forms are an amalgamation of the personality of the artist themselves and the culture and environment in which that artist exists. In many cases, the influence of the latter results in the emergence of something that holds a mirror up to the culture around it, or acts as a record of the person and culture which brought it to bear. The discordance of Stravinsky’s Rite of Spring echoed the disquiet and brooding nature of a world shortly to be plunged into the First World War and Russian revolution. The anger and fury in good hip-hop is a reflection of social injustices that many feel are still rife in Western society and a disillusion in society’s efforts to address them.

Stories, however they are told, are able to act as both a cultural mirror and record. Great story-tellers have the ability to transport one to the point where they pieced their words and stories together and immerse one within the place and culture that sculpted their story. This ability can act on a short scale, transporting one to a different part of a country at a given point in time, or taking one mentally across the globe and back (or forward) to times long gone or yet to come.

Historically, this was done through the written and spoken word, however as time has passed and technology has moved forward, so photography and then moving film has come to the fore. Both of these can hold a literal mirror up to the culture that they ‘see’ and record and document it. We consume these stories in an increasingly wide array of forms, from films and movies, to adverts, vines, videos on social media, photographs and gifs.

If you are reading ESF, the chances are that you are interested in stories about fly fishing. However, what does the culture that you see recorded and documented herein look like? Is it something you recognise and associate with? I would wager that it is in many ways, but the content in ESF typically sits outside the mould of fly fishing.

An outsider to fly fishing who looked in on the more typical documentations of UK fly fishing may well judge it to be a culture of tweed, flat-caps and social rigidity. For some reason, there is still a preponderance for portraying an ageing septagenarian in full tweeds gently shuffling down the banks of a salmon river with a 15ft rod in hand as the image of fly fishing. Or worse, the portly London hedge-fund manager standing at full height, new waders glinting in the May sunshine on the banks of the Test, wildly thrashing away at a freshly stocked brown trout that is questioning what on earth the large prickly looking entity on the water surface is.

Neither of these images fit with my, or my friends, perception of fly fishing and it leads to one of two conclusions. The first is that the photography and writing portrayed in many magazines and other traditional formats is a selective sub-sample at best, or outright distortion at worst, of the culture which it is attempting to portray. The second conclusion and the one that concerns me more, is that it is not a distortion and that fly fishing in the UK is actually to a large extent exactly as it is portrayed and the selective sub-sampling is being carried out by myself. 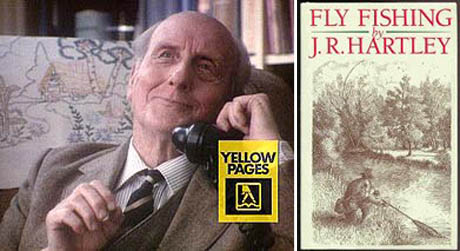 If either is correct, then it has profound implications for the future of a pastime that I hold dear above all others. When I look in from the outside at fly fishing in countries like Norway, Sweden and the USA, I see it being portrayed as something that is almost ‘cool’. Young, fit looking guys (admittedly looking faintly ridiculous with hipster beards and tattoos) are portrayed hanging out with their friends and catching fish. Fly fishing in these countries has become almost a counter-culture movement. This makes it appealing to others, most notably the younger generations and this is critical.

In the UK we are suffering from a dearth of new blood entering the sport. As someone in their mid-thirties, it still surprises me that I very rarely encounter anyone on the river, reservoir or sea with a fly rod who is younger than me. The vast majority are in their fifties or older. When that septuagenarian, his friends and the sexagenarians  behind them have shuffled along their last salmon river, who is following up through the ranks? The answer at the moment would appear to be very few people.

My belief is that this is partly due to the way in which fly fishing is portrayed in the UK. It will always be difficult to present fly fishing as an ‘extreme’ pastime and compete with videos of fist-bumping snowboarders jumping off the top of mountains, however the image of a well-to-do chap clad in tweed and waders is so out of kilter with the younger generation's perception of what looks ‘fun’ that he might as well have a massive sign above his head saying “This is boring”.

As a group of people and as a culture, we need to modernise, adapt and stop fly fishing from looking so stuffy. It is difficult to avoid wearing some of the kit we do, much of which looks distinctly unfashionable. Waders are pretty important in the climate of the UK, however they never look particularly hip. These (and the hideousness of fishing vests) aside, it should not be too difficult to present our sport as a great leveller; a pastime that doesn’t care where you came from, how much money you have or what you do to make that money. For many of us, it is exactly that. For others, however, it is a pastime that clearly does care about these things or at least they want it to be seen that way and currently it feels like they are holding the cards. This needs to change, otherwise I fear that fly fishing will, in time, fade into obscurity in the UK and all that will be left will be a few photographs of some chaps in tweed wandering along the banks of a river.