Nick Thomas shares a fly that is perfect for fish feeding on emerging flies.

For me fly tying gives three types and phases of pleasure. The designing and making of a new fly, the anticipation and expectation of using it and finally the confirmation that it works in catching fish. All round satisfaction of a job well done in fact. These pleasures can occur close together or far apart depending on the type of fly and the time of year you’re tying it. This makes fly tying an achievable form of time travel. Sitting at the tying bench the anticipation and expectation of spring and summer can lift the spirit on a dreich winter day. This is a great pattern for that. This one is for a calm warm summer day on a lake when the trout are sipping shucks and studiously ignoring any conventional dry fly approach.

Such a lake is Garnffrwd in west Wales, a “verdant haven” which has spurred the development of a “standard of fly fishing which is enviable”. Not my words; Charles Jardine’s. He has written enthusiastically about ‘Garn’ in several magazine articles, including description of his own Shucking Palomino fly and Elliot Penn’s KJ which everyone who fishes there has, or should have, in their fly box. Garnffrwd is so rich in fly life that during periods of buzzer or olive hatches the fish don’t need to spend all their time rushing around intercepting isolated hatching insects. No not at all; they are smart. They conserve energy and feed opportunistically taking emerging flies when they are abundant and then patrol slowly and leisurely around picking up the shucks from all the flies that got away. So, if you fish a lake where the trout spend time shucking you need a decent shuck fly. 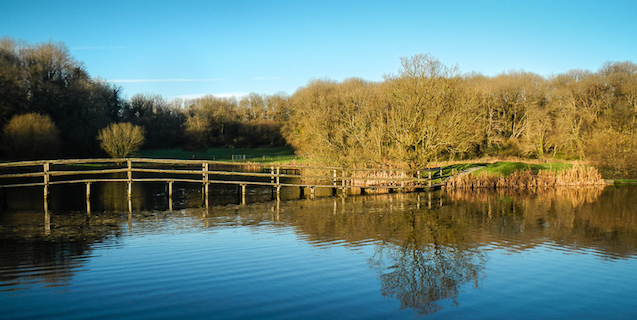 This fly came about because of a telephone call. I’ve written in ESF previously about flies that imitate discarded shucks (ESF #28) which can be a source of fixation for trout and vexation for anglers from time to time. I was sitting at the tying bench trying to think of an alternative way to form an imitation of a discarded shuck. The problem with trying to approximate a shuck is that there’s hardly anything to them; just a segmented semi-transparent tube of chitin and a few straggly bits where the hatching insect squeezed out.

Then the phone rang on the desk next to me and I reached over stretching the coiled lead to towards me – the penny dropped. I knew that nylon monofilament could be coiled to make nymphing indicators by treating in boiling water. Organza ribbon, my favourite fly tying material, is made of nylon, so maybe the fine fibres could be coiled to form a shuck imitation? A quick trip to the kitchen confirmed it could. Once I’d established that translucent shuck imitation could be manufactured I needed a way to make it float in the surface film without adding too much material to a minimal impression of the ethereal wisp of a departed insect. After a few experiments with CDC and foam I settled on a wing of black Aerowing to provide buoyancy with minimal visibility to the fish and a tiny bit of seal’s fur just to tidy things up a little. 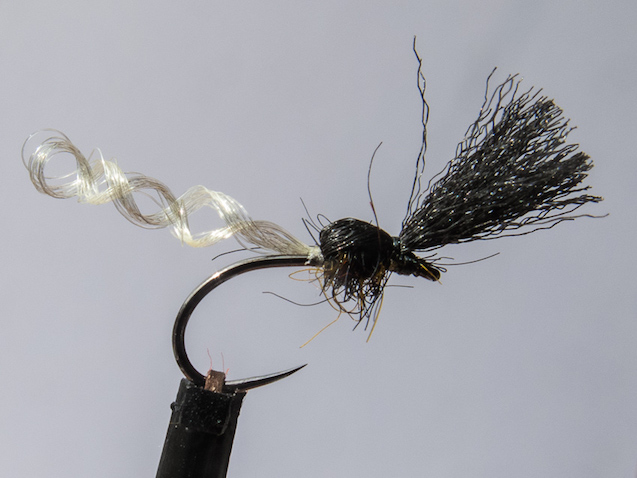 The transparency and residual segmentation of the shuck can be varied by including a few strands of darker organza fibres in the coiled shuck. Vary the size and colour of the shuck to suit the insects on your waters, but keep the hook small. You are not trying to imitate an insect, only the ghost of one. 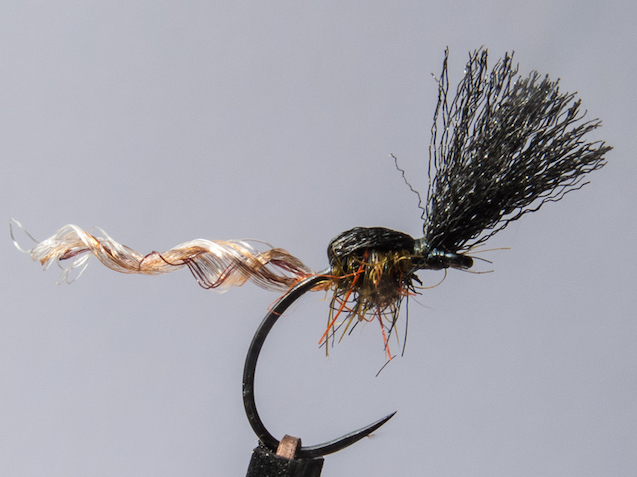 This is not a fly for casting to the horizon, this is a fly for close range stalking. At Garnffrwd and similar lakes the shucking trout will be under your feet feeding on shucks that have drifted into the margins. Tie the fly on a length of fine tippet on a furled leader and degrease the last foot of tippet. Put a dab of floatant on your finger tip and wipe end of the wing like a paintbrush followed by a light smear along the trailing shuck. Hold the fly in one hand with a few feet of fly line out of the rod tip. Now walk. Wait. Watch. Shucking trout tend to follow a repeating patrol loop circling from deeper water into the margins and back out. Pick your fish, wait till it swims away, drop the fly on its patrol path and wait. If you get it right the fly will be taken without deviation or hesitation and a gentle lift will be all that’s required to set the hook. 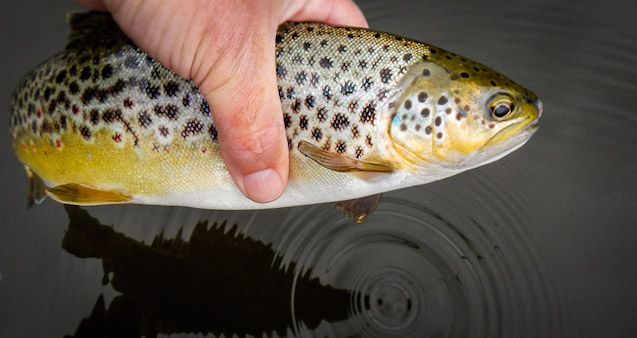