Ceri Thomas of Fishtec and Airflo escapes to the Welsh hills on a rainy day and finds pure gold.

It's not often the weathermen get things right. Barely a week ago, they were predicting the weekend ahead to be balmy 20 degree T-shirt weather. They got it drastically wrong - again! 48 hours of torrential rain, wind and hill fog in mid-July is usually not good for anything, except maybe lake fishing for wild trout.

So, with not much better to do I found myself on the banks of a remote hill Llyn (lake) in Ceredigion after a long drive, wondering if this was really worth it after getting drenched within minutes whilst putting on my waders and jacket.

The Great Desert of Wales - on a nice day!

The Cambrian mountain area of central Wales was once known as the 'Great Desert of Wales' - remote, bleak and almost treeless you could be forgiven to think it is a desert; albeit an uninhabited one rather than an arid place. Today it definitely wasn't arid at all; it was truly hammering it down. The term was invented by travel writers in the 19th century, which is also about the time these hills were visited by miners, in search of precious metals - in particular lead and silver.

The mining days have long gone, but in their wake they left a huge variety of earth dam reservoirs or enlarged existing natural lakes, to draw off water for mining purposes. Varying in size from just an acre or so, to 30 or more, these hills are studded with them in the most unlikely places. Many contain wild trout, and the most remote are never fished or considered to hold fish, even by locals.

My bible for this part of the world is a book called 'The Lakes of Wales' by Frank Ward. Written in the 1930s this rare tome catalogues literally every lake in Wales, no matter how far off the beaten track, big or small. I reference it frequently today – in the 'Great Desert of Wales' things have changed very little for centuries. It's been invaluable over the years for tracking down those places that have been completely forgotten with time, including a few very special lakes.

The Llyn I picked for this wet, miserable day was indeed a remote, forgotten about place; a fair walk from the nearest road and over a thousand feet above sea level. Wild fish thrive on neglect, and this place was neglected alright. Full of weed, it's almost unfishable in parts, with boggy soft margins where wading must be done with care. Such conditions afford protection to the trout from poachers and predatory birds, plus provide a decent food source despite the dark peat stained water. Over the years it’s always thrown up the odd big fish for me - a 15 or 16 incher here and there, with the average stamp being 12 -13 inches so it's a good water as far as upland Llyns go. It certainly produces better than average wild brownies where neighbouring lakes throw up stunted 10 inchers. Frank Ward certainly thought it was worth a visit back in his day. 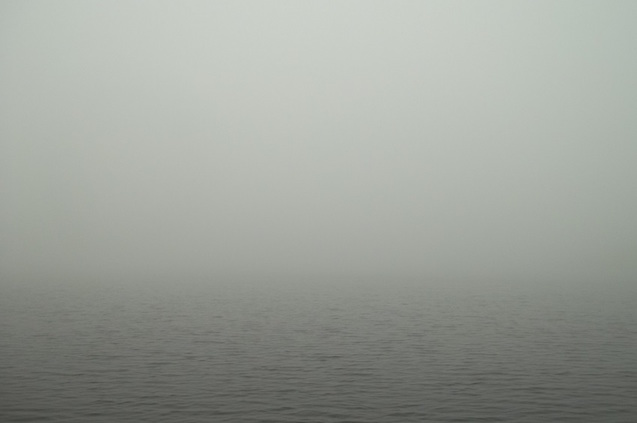 Fog in the hills.

After squelching through waterlogged sedge grass to finally reach the lake edge I gazed out into nothing - quite literally. I could not see a thing, the fog was so incredibly thick, and had collected in the depression the lake was nestled in. I was lucky to have found my way here without getting lost. It was an eerie, and totally silent place. Fishing in these foul conditions was a punt really - from experience wild lake trout can either feed well, or they may not feed at all in such a thick mist, but I was willing to take the chance. 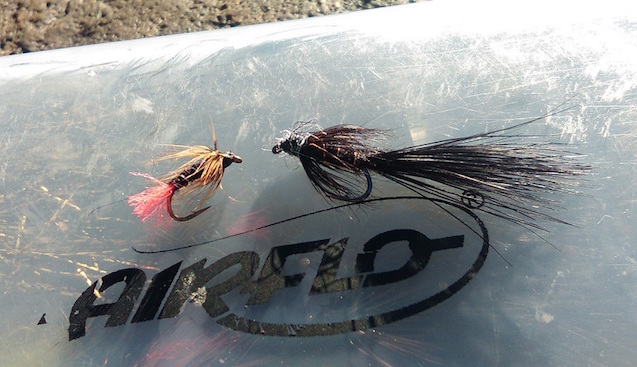 I rigged up my usual combo - 20 foot long leader, Intermediate Airflo polyleader, two flies - a small black lure on the point and a red tag wet fly on the dropper. First few exploratory casts into the margins and I had a pull - a small hand size trout on the dropper skips across the surface. Ok I suppose, not a blank!

Just up the shoreline to my left I see a tiny disturbance in the margins, a few inches out off a small gravel bank where minnows like to school. A 10 yard cast along the bank and the flies hit the target. Nothing. One more cast, and the point fly lands six inches from the edge in a similar depth of water. My line locks and goes solid - Is it the bottom? No - all hell breaks loose as a big angry bar of gold leaps two feet above the surface. After one hell of a scrap on a 6 weight, I get the net under a fine wild brownie, at bang on 17 inches. He took the dropper fly down to the back of his neck. A quick shot and back he went; what a start, and surely the fish of a season from this place!? 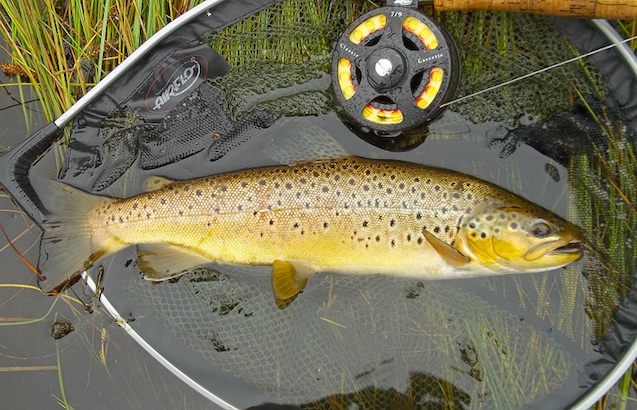 17 incher in the net

I carry on working the bank, stepping and casting my way quietly along the shore. The weed is so thick there is a clear zone a few yards out and then again over the beds into fairly open water five or six yards out.  It's in the gaps I start getting pulls, swirls and follows; some look like they could be really good fish.

Reaching a big pocket in some extensive Potamogeton weed beds, I cast a short line into the space, with the flies landing inches away from the weed-line. One long draw and the line stops, something is on and it thumps away, not breaking the surface once. In fact it's so strong I can’t stop it from heading straight through the thick weed, leader line loudly vibrating and straining as the stems part. A hair-raising fight ensures, at any time I am thinking the hook will pull, such is the strain I am having to apply! But my 7lb G3 fluorocarbon leader proves strong enough to cut through the thick stems and wrestle him out. Finally I see him, thick golden back, shoulders like a horse. One net lunge and he's mine. A slab, a proper Welsh Llyn brownie of 18.5 inches on the point fly. One of those fish that gets the adrenaline going, and the knees knocking! 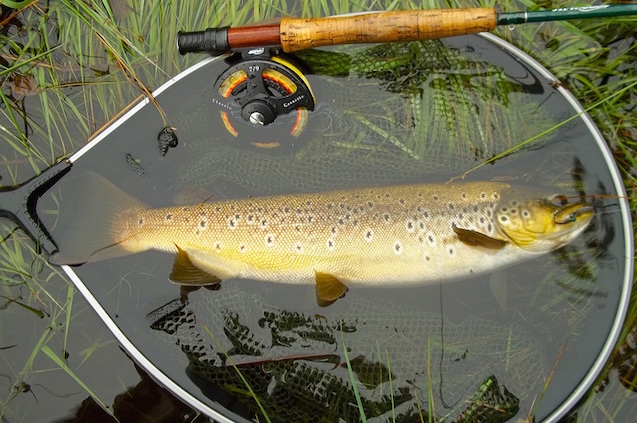 A fish of a season

An old fishing mate, Alan Parfitt claims a 2lb plus hill Llyn Welsh brownie is equivalent to a double figure sea trout, such is their rarity, and I think he is right. At just 20 minutes into the fishing I cannot believe two such fish have come to the net! At this point I would be more than happy to blank for the rest of the day, or go home and dry off.

But that's not it for the day - I carry on working my way round the lake, and yet more Welsh beauties hit my flies - the sport is fast and furious; the big brownies are in the margins, feeding hard. A cracking 18 incher takes on the hang under the rod tip, and spits out a stickleback at me as he goes back.  Another decent one takes my flies in a huge swirl as I toss them into the water at my feet after cleaning off some weed - I pull back on the leader and he’s on, playing by hand for a few seconds until I lift the rod! A few casts later I get one on the dropper as the point fly sticks in some sedge grass on the bank - they are that close in. Solid takes continue to come, with the flies pulled parallel with the bank, or on the hang just a rod length away. 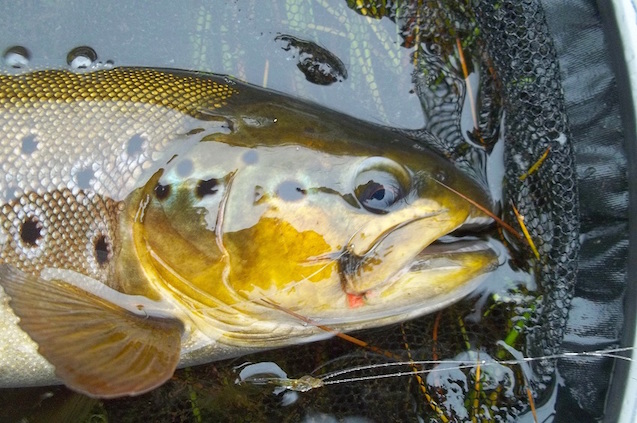 Head of an 18 inch brown - red tag in the scissors 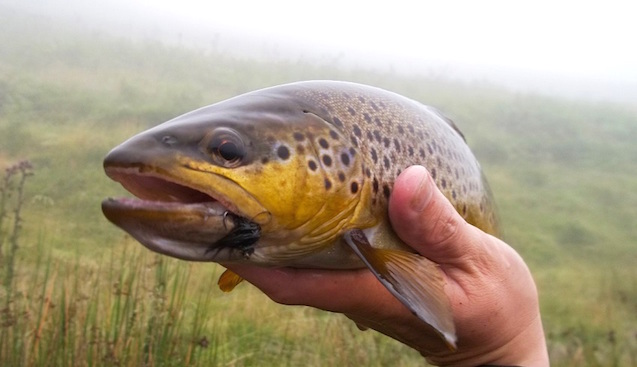 They feed in the fog

This is once in a season fishing, or maybe a once in a lifetime event, where each and every big fish in the lake is on the prowl in the shallows and willing to hit your flies. There was nothing smaller than a pound to be seen, with the average size well above what I normally count as a really decent fish here. 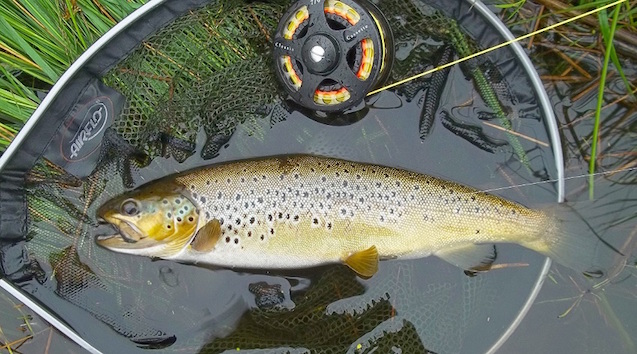 It took me a few hours to do a full lap of the lake, and cover the whole shoreline in the old ‘step and cast’ fashion. The end result was a baker’s dozen of superb golden Welsh brownies, the like of which I will probably never see again in a single day’s fishing, let alone many seasons more of fishing in the hill Llyns.

I left for the car, soaked but thankful for once that the weather forecast had been totally wrong and elated with such a rare catch. I took a last departing glance at the lake – It was exactly as I had found it, silent and mist drenched, like I had never been there. Did it really happen? All I knew is I had found true Welsh gold in the hills that day. 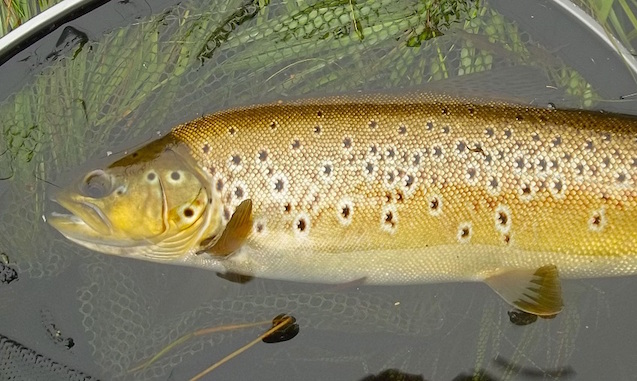