It's funny the things you come across on the river. James O'Brien tells more

I was knee deep in a clear, fast flowing river in North Yorkshire when yet again I fed the trees another fly, unable to reach high enough for it, I pulled for the break.

As I reached into my pocket to remove the fly box, the hinge retaining pin went into the river leaving me with a three piece box.

What I needed was a magnet to recover it, but who carries a magnet on a string when you're out fishing?

I do, on my landing net.

So groping about around my feet for a few minutes produced only a clogged up magnet.

Feeling rejected I went to a convenient log to re-tie a new leader and bemoan my fate.

When Dave, my fishing buddy, came upstream I was still sitting, just enjoying the river and happy to have a moan about said pin.

'You got a paper clip? Just straighten it out and problem solved' he said.

Yeah, I have a magnet but a paper clip? No I don't think so.

About half an hour later we had moved a way up and we were on opposite sides of the river taking turns to cast into a deep pool when Dave shouted (in a very good imitation of Victor Meldrew) 'I don't believe it!' He appeared from behind a tree holding a chain of six pink coated paper clips aloft. 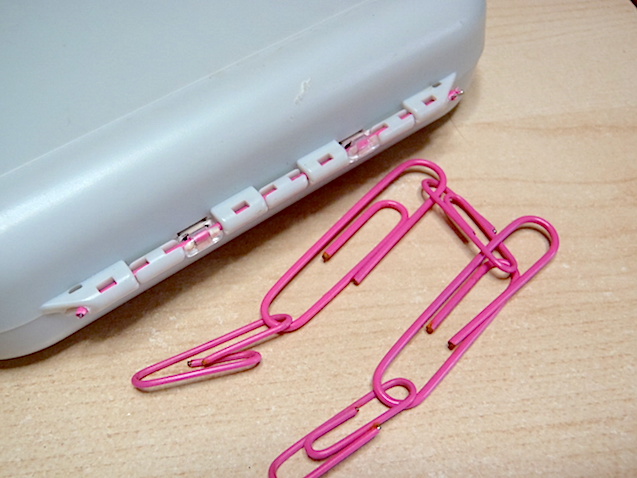 The grin he had stuck to his face was contagious, and we then had a biggest grin contest. I won.

The repair was made and the box is as good as new for the day. No, make that for good!

Now, who would hang a chain of paper clips on a low tree trunk way up a river with little or no access except by wading?

Or was it as Dave said 'The tree gods paying you back for all the flies you've donated to its many different branches throughout the years'.

Honestly, I don't know, but if it was, thank you.