As mid-summer passes, as the days start to shorten, as summer temperatures rise and chalk stream river levels drop back many fly fishermen retreat from the rivers, perhaps just venturing out for the evening rise. The hope of falling spinners or skittering Caddis drawing us back to the river. But daytime fishing can still be productive even through the dog days of July and August.

Standing on the bridge I couldn’t believe it was the same river I’d fished back in November and February. The water was still gin clear, slipping by over bright gravels, but what had been an open river was now crowded by shoulder high bankside vegetation and instream reeds that narrowed the channel to a few feet. 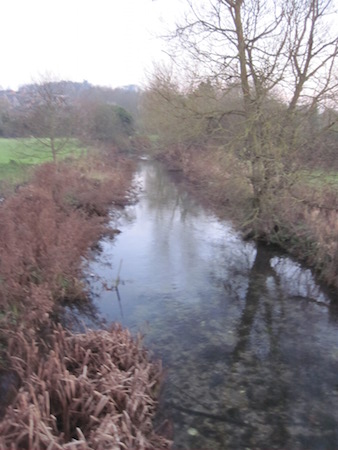 The Bourne at Laverstock in November 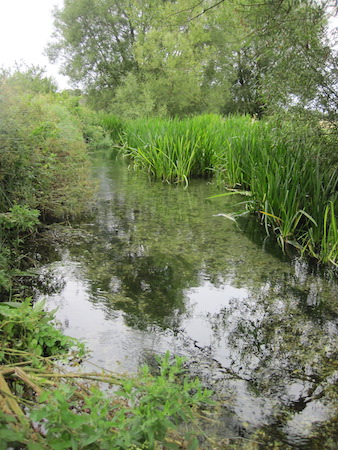 The same stretch of the Bourne in July

In winter I could scan far up the Bourne for rises, now I could barely see a few yards ahead. I very nearly went back to the car to drive on to another beat. I didn’t. I stayed because as I stood on the foot bridge I could see a small shoal of grayling on the fin above the bridge and several larger trout tucked in front of the tree just below the foot bridge. 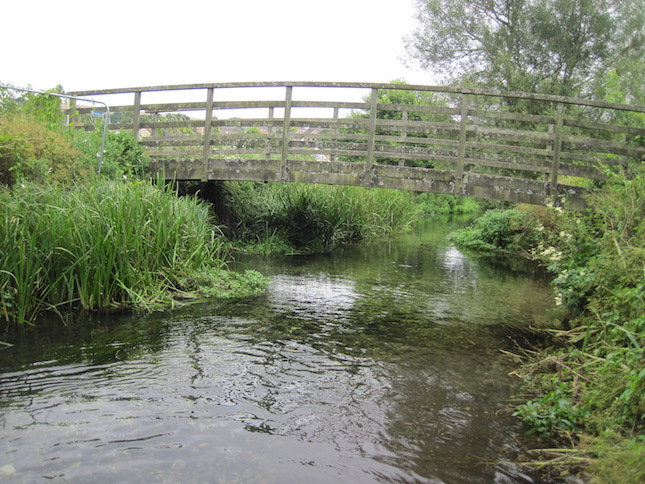 Vaulting the fence I wandered to the bottom of the beat and dropped in. I immediately realised I should have brought a shorter rod. It’s funny how your memory plays games with you. I remember the beat being more open, it wasn’t. I persisted. A few fish were dimpling under the trees so I tied on a Parachute Adams. There was nothing obvious hatching and the Adams is a good general purpose imitation for a range of upwings, stonefly and small caddis. The first two fish I put down with my ham-fisted casting. The next fish took my fly and promptly buried itself in the ranunculus throwing the hook. As my eyes adjusted to the light I started to see fish hanging over the gravels in between the swaying weed. The best ones were, of course, in the spots I couldn’t cover. This didn’t stop me trying, but I mostly failed, leaving my fly buried in the undergrowth in front or behind me. 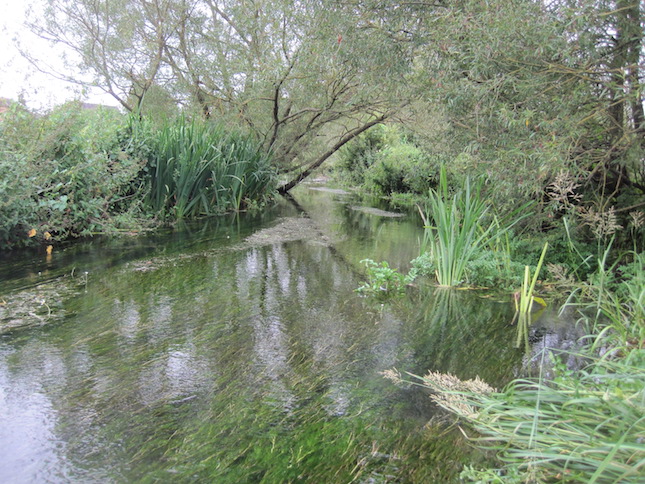 In under the trees

One of the benefits of high summer fishing is that the river is usually as clear as a bell and with lower levels the fish often migrate in to deeper pools or faster oxygenated runs. This generally makes the fish easier to spot. As I emerged from under the trees a run of about thirty yards stretched out in front of me. It was between mid-calf and knee deep with good flow and very little weed growth. As the sun came out from behind the high clouds a large shoal of grayling were revealed to me. I watched them jostling for position on the gravels, edging from side to side intercepting passing food. They were clearly hard on the feed. As the clouds once more screened the sun the fish disappeared from sight. I snipped off the Adams and tied on a small Pheasant Tail Nymph. As the fish came back into view I cast to the front of the shoal and let my fly dead drift back through the shoal. Nothing happened. I tried again with the same result. I tried a different pattern but with the same outcome. On the next cast I let the fly settle and as it came to the back of the shoal I gently lifted the rod tip and a small grayling scythed across the current to intercept it. So the pattern was okay. I tried the dead drift once more and the fish ignored the fly.  I then gave the induced take another go and a larger grayling at the front of the shoal turned and chased the fly downstream grabbing it as I lifted off. The grayling weren’t spooked so I continued my experiment. Eight fish later: dead drift nil, induced take eight. 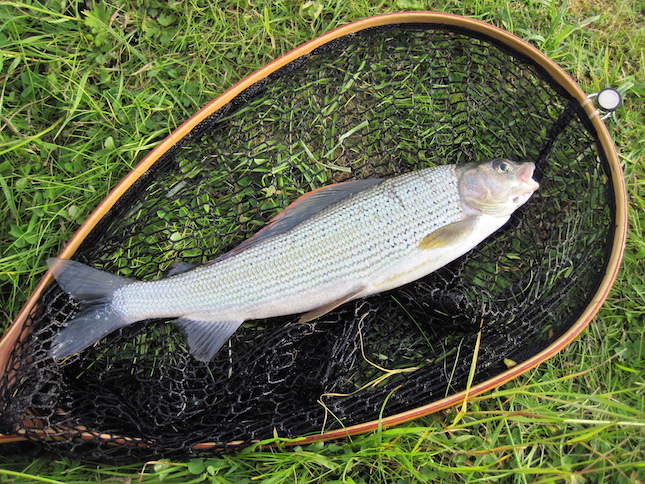 I wondered if it was just that shoal so I headed up to the bridge. The fish I had seen earlier were still feeding over the gravels above the footbridge. Once again the dead drift nymph was ignored whilst the induced take elicited aggressive takes. Quite often when nymphing I will use a yarn indicator where I can’t see the fish and therefor the take. This can be a very productive method but it does present the nymph dead drift. I made a mental note to, in the future, try a regular lift of the rod tip to breathe life into the fly.

A little further upstream I found myself fighting through a dense thicket of nettles trying to find an access point. As I paused to consider my route I suddenly felt like I was being watched. I looked around me and spotted two large ears poking up above the ears of wheat in the field adjacent to me. As I watched the ears lifted to reveal a pair of big dark eyes. When the young roe deer sensed I was watching it dipped its head, but the big ears were still visible. It didn’t spook so I guess it was laid up waiting for its mum to return. I quietly moved on leaving it in peace. 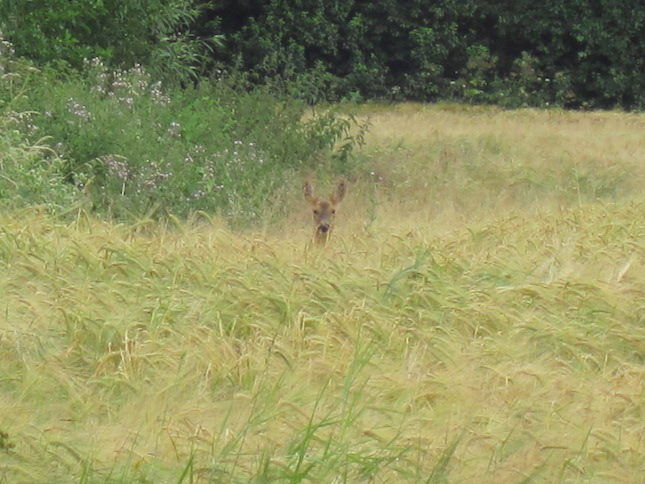 A few days later I got an invite to fish the Meon. My host would be late but I was told to get on and fish without them. I didn’t need telling twice. There was noticeably more water in the Meon, compared to the Bourne. 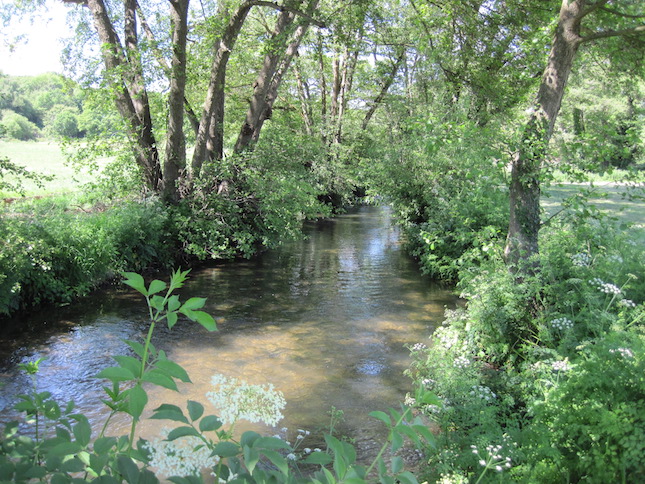 The Meon in midsummer plumage

Nothing was rising so it looked like nymphing time. Whilst the water was clear, the deep pools, broken water and overcast skies made spotting specific fish tricky. I tied on a small bead head nymph and attached a New Zealand yarn indicator. I tossed the fly under trees, along bank edges, into the faster runs and was rewarded with a handful of petite wild brownies 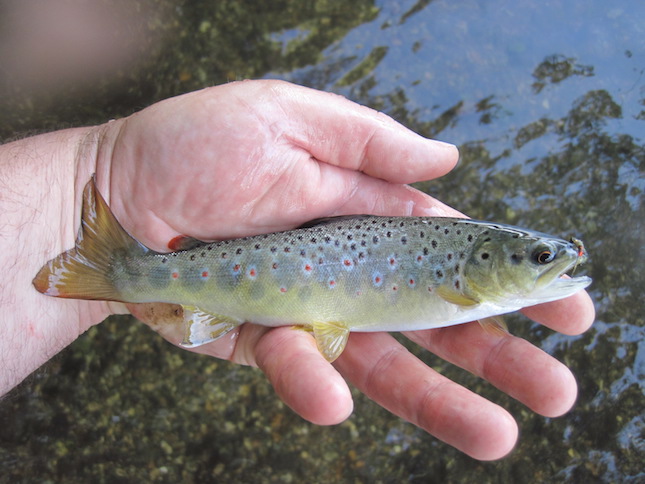 Just before the first foot bridge the river scours a deep hole. The kind of spot that should hold a better fish. I switched nymphs for a heavier pattern and flicked it onto the shallow gravels letting the current wash it into the pool. I watched the indicator for any sign of a take but nothing happened. I tried to the left and I tried to the right but nothing happened. I tried one last chuck. The nymph disappeared from sight, I paused and then I lifted the rod tip. The indicator dipped then disappeared. I tightened and felt solid resistance. The fish rushed around the pool furious at its capture.  When it came into sight it was a nice grayling. The biggest I’d caught on this beat of the Meon and fin perfect. 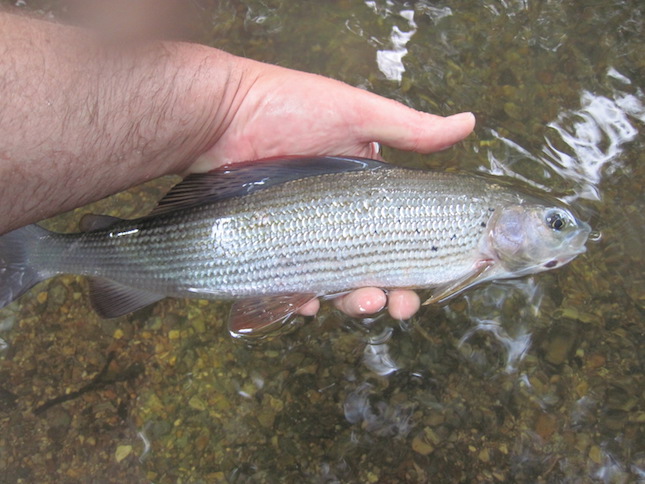 Round the corner is a very narrow deep run, tight between two trees. It’s a tricky spot to cover effectively with not much lead to allow the nymph to get down to where the fish must be. I tried and tried but nothing was forthcoming.  I tried to wade up through but lost my nerve as the water lapped at the top of my waders so I beat a retreat.  To fish the deep water in front of the two trees I wanted to be on the other bank so I crossed over at the foot bridge and snuck up the bank sliding in as gently as I could for fear of spooking the fish. It is a tight spot and I was fishing the nymph right under the rod tip. Several trots through went unrewarded until I raised and dropped the nymph on a tight line just as it passed in front of me. The undulating passage of my artificial was too much for a fish lurking just a few feet from me. The rod tip pulled over as the fish made for a tangle of roots. I leaned on it hard and managed to keep it out. I led it a little way upstream before endeavouring to get its head up. I was pleased as punch when the trout slipped into the net. A fish twice the size of the typical fish thereabouts. 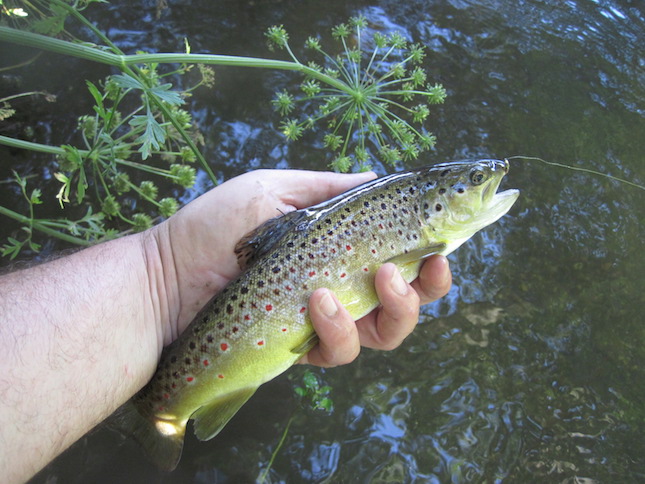 Those two days on the chalkstreams taught me an important lesson. Whilst sometimes dead drift will be key to success often a slight lift of the rod tip, a tweak of the nymph can get the fish focussed on your fly and help you avoid a blank.